Like other French movies of late, Alice Winocour's "Augustine" has a lot of surface appeal, especially in its terrific lead performances and handsome visual manner, but little depth or originality in its approach to an intriguing subject: the medical uses made of a female "hysteric" in late 19th-century Paris. Ultimately, while this character-based drama proves consistently engrossing, it leaves various pertinent and fascinating issues frustratingly unexplored.

Winocour's script is based on a true story involving one of 19th-century France's most celebrated scientists. Although the film doesn't go into the extent and many reasons for his reputation, Jean-Martin Charcot (Vincent Lindon), now known as the father of modern neurology, was a pioneer in investigating various ailments from Parkinson's disease to multiple sclerosis, which he named. His most famous work, and that dealt with in "Augustine," however, involved hypnosis and females suffering from hysteria.

When we first see Augustine (Soko), who becomes one of his most renowned patients, she's a serving maid who collapses to the floor in an epileptic-like fit while serving dinner in a bourgeois household. Her recurring affliction not only disrupts the quiet life she's trying to lead but also leaves her partly paralyzed, with her right eye frozen shut.

Transferred to the care of Charcot, she's evidently one of many women being studied by the professor, but she gradually becomes a star – a word not used lightly here. After determining that her seizures can be induced through hypnosis, Charcot puts her to sleep and into a fit of hysterical writhing in front of a medical theater filled with colleagues and officials, buttoned-down professionals who react with barely concealed prurient excitement to the sight of her frantically undulating hips and sensuous crotch-grabbing.

The connection between sex and power here (the interest created in Charcot's work, we learn, helps assure his funding), and the idea of the woman's erotic display as performance, form one of two important motifs at the center of "Augustine"'s drama. The other is the subtle interplay of attraction and will in the chemistry between Augustine and Charcot. At first, theirs is the strictly professional relationship of doctor and patient. But gradually she begins treating him in a lover-like way – subtly flirting, growing jealous when he goes off on a trip -- an attitude to which he ultimately responds in kind.

That this delicately evolving relationship emerges as persuasive and quietly moving is a credit to the actors who embody it. Vincent Lindon, one of the French cinema's most formidable talents, gives a performance so scrupulously restrained it almost seems cast in concrete; poker-faced and consummately deliberate, his Charcot resembles the hospital where he works – a dour, imperturbable façade behind which simmer emotional conundrums that can only be guessed at. As Augustine, singer-actress Soko has a more open and vulnerable countenance but a similar forcefulness; her trajectory encapsulates Jacques Lacan's remark that "A hysteric is a slave looking for a master to rule over."

The visual world that Winocour and cinematographer George Lechaptoir create to surround these characters is one of burnished woods, heavy curtains and a near-constant darkness that throws the brightness of faces and flesh into welcome relief. The setting's cloistered mood is further enhanced by Jocelyn Pook's excellent, lyrical score, which also cues us to something noteworthy about the film: it is essentially a romance.

A certain kind of romance, to be sure – one between characters who are vastly unequal in age, personal resources and social status, and whose emotional convergence thus almost cannot be other than fleeting and fraught. Of course those very constraints help make the romance all the more intense and poignant, yet they also point to dimensions of the relationship besides romance that the film pays unfortunately little attention to.

Charcot keeps speaking of a cure for Augustine, and eventually she boils over in frustration, exclaiming, "You keep saying that and nothing happens." She's right: Though we see Charcot acting like a dedicated, conscientious scientist, making copious measurements and notes (in real life he reportedly took many photos of Augustine but the film doesn't include this), we never get a sense of what he makes of her case. Not once does he tell anyone what he thinks her problem is or how it might be cured.

Keeping such matters opaque may indeed sharpen the focus on the purely emotional currents passing between the two characters, but it also inevitably diminishes the drama's intellectual aspects. David Cronenberg's "A Dangerous Method" (2011) deals with a female hysteric under medical treatment, by Sigmund Freud (who studied under Charcot, incidentally) and Carl Jung, the latter of whom she has an affair with. But the film is not so strictly focused on the characters' libidinous intersection that it effectively blocks out all else. A film of ideas as well as emotions, it shows us the struggle to understand and remedy the woman's malady, and in doing so offers insights into the creation of some of the key methodologies of modern psychoanalysis.

Rather than attempting any similar exploration, "Augustine" simply assumes that the viewer shares certain currently conventional ideas regarding gender, sex, power and the ways medicine can be used to subdue certain behaviors. Within this complex of fashionable but unexamined attitudes, it constructs a movie romance like many another.

And that leaves the historical context feeling rather sketchy. Late in the film, Charcot's wife (a smart performance by Chiara Mastroianni) reads him a newspaper article by Guy de Maupassant that begins, "We are all hysterical, since Dr. Charcot, the high-priest of hospital-harvested hysteria, spends a fortune maintaining a race of nervous women, whom he infects with madness, provoking a demoniacal frenzy."

This is overstated, but is it unfair? "Augustine" unfortunately doesn't give us enough information to decide. Winocour's Charcot responds simply be calling Maupassant "an idiot." One suspects that the real Charcot might have been more in-depth and eloquent in his own defense, as another film about him might also be. 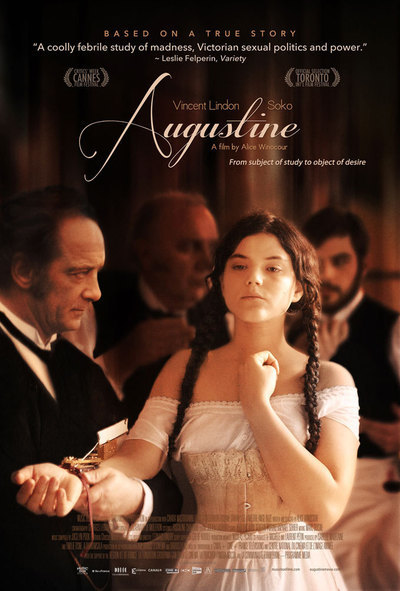