Vincent is a French special forces soldier who has returned from Afghanistan. He has suffered acute hearing loss, and it is uncertain whether or not he can return to battle (which he wants to do). He also suffers from severe PTSD. He has a hard time distinguishing legitimate threats because everything seems threatening. His head is filled with buzzing and ringing from his damaged ear, and he often clamps his hands over his head, massaging it, trying to make the buzzing go away, trying to tamp down the internal chaos. Played by Matthias Schoenaerts, Vincent is a tormented and inarticulate man, and the riveting center of Alice Winocour's sexy, relentless thriller "Disorder."

While he waits to be sent back to war, he and his army pals get jobs in a security detail, their first gig working a party at a mansion owned by a Lebanese businessman named Imad Whalid (Percy Kemp). Whalid lives there with his wife Jessie (Diane Kruger) and small son Ali (Zaïd Errougui-Demonsant). Television screens proliferate in every space, showing news anchors speculating about a growing political scandal involving international arms-dealing and French politicians that could topple governments and corporations. Vincent's just a soldier, albeit a highly trained one. He was sent to fight a war by those in power, the people at this very party. His health and his mind were wrecked for it, while those at home got to stay safe and oblivious. He has no say in how his country has used him, and then tossed him out. Vincent's sixth sense tells him that something is very wrong at that party, but he doesn't know what.

Hand-picked by Whalid to guard Jessie and Ali while Whalid goes out of the country on business, Vincent settles into a new routine, strolling the grounds, checking locks, driving the wife and kid for an outing to the beach. Diane Kruger is lovely and fragile here, with spurts of sharpness, and an occasional imperious attitude towards Vincent. Vincent is almost shy with her, feeling the vast class differences between them. He has no problem bonding with the family dog, however (a nice touch, calling to mind Arthur Miller's comment to Peter Bogdanovich on why his late wife Marilyn Monroe got along so well with children and animals: "They didn't sneer at her.") From the first moment he saw Jessie, crying in a bedroom during the party, Vincent is intensely drawn to her. As shattered as he is, he is a natural protector. (Schoenaerts often plays such roles, most memorably in "Bullhead" and "Rust and Bone." He's wonderful playing men bound up in muscles, unable to let loose their equally powerful tenderness. Schoenaerts' vulnerability as an actor leads him towards a rough and honest kind of truth.)

As the film plunges into a home-invasion thriller, with mysterious cars parked at the end of the driveway and shadowy figures stalking the house, some viewers may feel they have seen it all before. But Winocour has such a unique approach to the familiar material that the clichés (this is, after all, a genre film) are irrelevant. The entire story is told solely from Vincent's often-distorted point of view. Because of his considerable physical and emotional challenges, many of the sequences have a hallucinatory quality, starting with the party, where Vincent wanders through the crowd in slo-mo (the camera trailing along behind him, as it does throughout), the dance music's bass line throbbing, a sound Vincent feels, rather than hears. Vincent's brain, already flooded with excess adrenaline, cannot absorb what comes at him; he isn't sure if what he perceives is real or a phantom manifestation of war trauma. His confusion bleeds out into the audience. We question his reliability as a narrator. It's extremely effective. In a stunning sequence on the beach with Jessie and Ali, Vincent senses a threat, like an animal senses a predator approaching, even though it's as yet unseen. On high alert, he scans the benign landscape for what he knows is out there.

The sound design (by Nicolas Becker) is a show-stopper. It's omnipresent, forcing us into Vincent's head-space at all times. Everything is distorted and disorienting. Voices are fuzzed-out. Lawn sprinklers sound like Niagara Falls. A vacuum erupts into a roar. Brian De Palma's "Blow Out" instantly comes to mind, as well as Francis Ford Coppola's "The Conversation," stories with a similar obsession with sound as well as atmospheres of phantasmagorical political paranoia.

There is wonderful, complex scene-work done by the actors, especially in one scene where Vincent's security buddy comes to the house, and flirts so easily with Jessie that Vincent looks on, uneasy and jealous. He's left out. Nothing is easy for Vincent. There's another scene, late in the game, where Jessie, who has by now spent more time with Vincent than her own husband, tells Vincent about how she could see him moving to Canada and living in the wild, that that was his true milieu. Vincent actually laughs, but Schoenaerts adds shyness, and surprise that anyone—especially her—gives him a second thought, sees a possible alternative for him, sees him at all. It's moments like that when Winocour, an extremely gifted director (who also co-wrote last year's stunning "Mustang," another story about people trapped in a house), really shows her cards, what interests her. It's him.

Schoenaerts is a major actor. He is such a strong physical presence that his best roles have utilized it explicitly, making his body and his size an integral part of the character. What makes him a great actor is that his sensitivity and subtle inventiveness (in terms of how psychological reality is revealed through behavior), is equal to the size of his body. His is not just a natural, instinctive gift. It's a smart actor at work, understanding that the most important thing is what's going on in his head. "Disorder" is tense and scary, beautiful to look at and even more gorgeous to hear. In the end, it is also extremely moving. That's the most thrilling part of all. 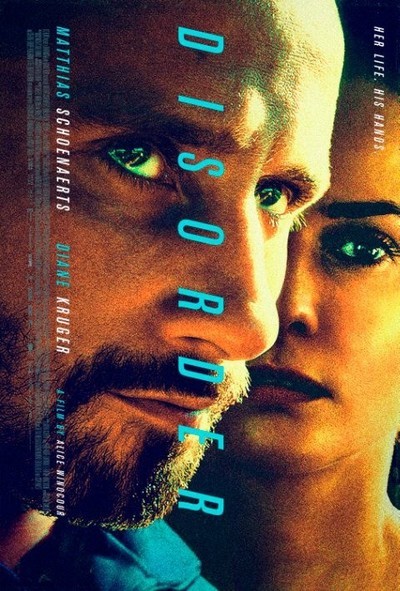