That Feeling of Connection: Gillian Robespierre and Elisabeth Holm on "Landline"

Co-writers Gillian Robespierre and Elisabeth Holm wanted to “try to tell a bigger story” with their new film, “Landline,” after their success with “Obvious Child,” said Robespierre, who also directed both films. For their next project, they wanted to keep working together and keep working with star Jenny Slate. But they also “wanted to weave different plot lines together, get an ensemble cast,” Robespierre said in an interview with RogerEbert.com that included Holm and Abby Quinn, who plays the younger sister of Slate’s character.

“Jenny was literally in every frame of ‘Obvious Child’ and we had a great time doing it. But we want to continue to grow as storytellers, and that means more characters, more relationships. We tapped into the mother-daughter relationship in ‘Obvious Child.’ It was really nice and we just weren't done. We wanted to expand more on the mother-daughter relationship. It's one of the most important relationships in our lives. And we wanted to create a whole family and talk about what it's like to be a woman within a relationship and what monogamy feels like.” Holm added, “Monogamy is a choice you make with a partner, it is imperfect, complicated, often impossible, but if you and your partner choose that, you need to be respectful of that choice.”

“Landline” stars John Turturro and Edie Falco as the parents of two daughters, the older one played by Slate and the younger played by newcomer Quinn. The three women have very different sexual encounters in the film, all revealing character and moving the story forward. “We definitely wanted to show a lot more sex than in our last movie,” Robespierre said. “We wanted to show different aspects of it, a little bit more realistic, what it feels like to be in a long term relationship that's perhaps a little stale, a little dull, when ‘spontaneous’ sex is planned, and it's also just not that exciting, and you kind of are rushing to get it over with. We wanted to show what imperfect, awkward sex looks like.”

The movie opens with Slate’s character having very imperfect, awkward sex with her fiancé in the woods near her family’s country home. “It's a struggle for Jenny's character to be enjoying herself in their relationship and it's not just because she's uncomfortable in the woods. It's because she's not in a good place in the relationship. She's feeling trapped. We wanted to show how that plays out in a sex scene. And in Abby's sex scene, she's enjoying it, she's proactive about it, she wants to have sex, she brought a condom, but it's also awkward because she’s a teenager and it's hard to communicate what she wants because she really does not know.” Quinn described her view of that scene: “She gets in a huge fight with her parents and so she goes off to their country house. It's like a total rebellious thing to do, so I'm sure the entire time she's having sex eighty percent of her thought process is, ‘Oh I hate my mom and dad,’ ‘Take that,’ and not actually focusing on what's happening.” 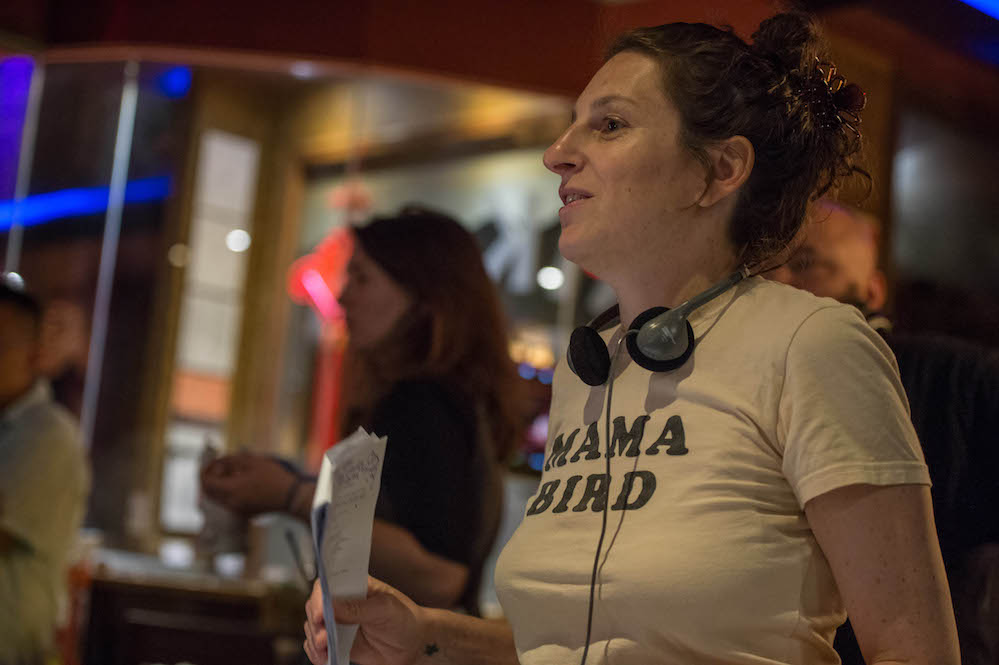 For Robespierre, “Edie and John is the real heart of all these sex scenes. It's what 20 years of marriage looks like. She has an orgasm, but it's bittersweet. It's very sad.”

Holm continued, “For all of these characters, I think sex is never just about sex. And for a lot of women that is often the case. I mean probably for a lot of humans that is often the case, but it's something that we rarely get to see on screen. And so whether the sex is defiant or rebellious or tied up in so many other things happening up there while other things are happening down there, we were trying to capture all of the emotional intimacy and complexity that's happening while other things are happening.”

Quinn has a breakthrough performance as the teenager who at first is trying to be as different from her good girl sister as possible, but then teams up with her when they discover that their father is having an affair. Quinn explained that when her character “could no longer take it for granted that everything around her was being taken care of, she had to learn to focus on someone other than herself.”

Holm added, “We always wrote with this idea that Abby's character was smartest one in the whole family, but she's in that weird spot where she's not quite an adult yet and she still has some childlike tendencies that she's battling. She wants to snuggle but she also wants to pay her own rent and be an adult,” Robespierre said they cast Quinn in the role because, “The [audition] tape just blew us away. Abby was both serious and able to be a little playful. So she let childlike qualities come out through a giggle or a smile but she was also just really still able to be vulnerable.” Holm said, “and then we also Googled her and saw that she was a very beautiful singer. To have that sort of depth already at such a young age and to have so many passions and interests just made her very human.  And we had a little conversation that was very nerve wrecking for everyone. It's like a blind date. But we hit it off. And we also saw a curl in her hair.” Robespierre explained, “I have very curly hair and Liz has very curly hair and so does Jenny. I said, ‘She is one of us.’”

Quinn, who will appear in an upcoming episode of “Black Mirror,” said, “I thought that I wanted to only do comedy and now I feel like I'm leaning more towards drama. I kind of I think as soon as I do one thing I want the other, or that's like what I'm most excited for next. My music teacher said, ‘Hold on tightly, let go lightly.' I feel like I can apply that to everything. You just have to let go and accept whatever is happening now, in acting and the same thing in life.”

Setting the film in 1995 had the advantage of eliminating modern technology. The characters do not have access to cell phones, social media, or the Internet. The title of the film signals the era when the most up to date mechanism for communication was attached to the wall. “We set it in the 90’s because we wanted to show this family who was not communicating, who had to figure it out, and do it by looking each other in their faces and not through text messages or snooping on your child’s social media. We didn’t want it to be nostalgic. We wanted the story to work even if it was taken out of the era.”

Setting it in 1995 meant they had to find equipment that was more than twenty years old to use as props, and at least some of it had to work. “One of the biggest dramas we had on set was getting the old printer to print,” Robespierre said. “And shooting in New York on a limited budget is not easy to do in the period. It's not a period that's so far away that it's impossible, but most of the Mom and Pop shops from the 1990’s have been demolished for Starbucks and Chase Banks. We had to find those little slivers and pockets of New York that could pass for 1995. But it's a family story. It's about the inner lives of this family. So they were inside much of the time. We got to bring things from our homes. I’m not calling Liz and her mom packrats because they're very neat people, but they had a lot of VHS tapes and Blockbuster mugs and stuffed animals. The bedspread was the bedspread I had when I was little. They found Merimekko fabric and turned it into a quilt. I kept it for my daughter. Liz and I both had a lot of Formica and wall-to-wall carpeting and we were able to bring those little pieces into the apartment.”

All of the characters make mistakes, but the script and performances keep us rooting for them. Holm said, “It was really important to us that no character is a villain, especially dealing with lying and cheating. But we wanted you to have empathy for every character in this movie including John’s character. He brings such humanity to this character. He's not just a husband. He's a man trying to figure his own life out.” Robespierre said, “We want people to see this film and feel like they are going to be okay. That feeling of connection and feeling like it's going to be alright and that you are not alone is something I hope we can offer people in every movie that we make.”