A most unexpected thing occurred when two-time Oscar-winner and documentary icon Barbara Kopple attended the inaugural DOC10 Film Festival at Chicago’s Music Box Theatre last month. Her latest film, “Miss Sharon Jones!”, had been chosen as the festival’s opening night selection. It felt somehow appropriate that the filmmaker was in town at the same time a teachers strike was occurring downtown, considering that Kopple’s classic 1976 debut feature, “Harlan County, U.S.A.”, was about a miners strike in rural Kentucky. “Let’s hear it for the teachers!” Kopple shouted from the audience in the seconds before her film began, eliciting cheers from the crowd.

“Miss Sharon Jones!” centers on the titular soul singer and formidable life force as she undergoes cancer treatment while continuing to perform with her R&B band, The Dap-Kings. Throughout the picture, a woman seated directly behind me quietly responded to Jones’ words throughout the film, reacting to insights regarding her illness with affirmations of “Yes” and “That’s right.” During the Q&A afterward, the woman stood up and identified herself as Patty King, the daughter of B.B. King. She told Kopple that she was deeply moved by the film, and revealed that she was undergoing her own battle with cancer. Kopple then asked King to come up to the front of the theatre and sing anything she wished. As the audience applauded in support, King was handed a microphone and proceeded to belt out a rousing, utterly joyous solo of “Let the Good Times Roll.” It left Kopple and everyone else in the room exhilarated.

Prior to this extraordinary screening, Kopple spoke with RogerEbert.com about getting her start with the Maysles brothers; her great doc, “Hot Type: 150 Years of The Nation,” soon to acquire distribution; and the scene in “Miss Sharon Jones!” that ranks among the most beautiful things she’s ever witnessed.

Roger Ebert championed many of your films, and I’m almost certain he would’ve loved this one.

Roger is one of the most significant writers. He was so insightful, he was so smart, and it’s because of him that so many of our films got seen. He was so encouraging and loving and I miss him greatly.

During a Q&A with Roger at the 2005 Sundance Film Festival, you told him about how “Harlan County, U.S.A.” came out of the tradition of Albert Maysles.

Well, my first job in film was with Albert and David Maysles. I was taking a course at the School of Visual Arts in cinéma vérité, and there was a young woman, Angela, sitting next to me. We became friends, and she was the receptionist at Maysles Films. She told me that they were looking for an intern, and I told her that I would give anything to be an intern. So I came to Maysles Films and they said yes to me right away. I just did everything that nobody else wanted to do. They’d give me all these huge assignments, and I’d complete them. They’d ask me to get the mailing list from the Museum of Modern Art, which is just about impossible, but I did it. They cared about us as people. It was mostly women that were working there, and we’d have discussions about films and about the work that the Maysles were doing, and they would actually listen to us. So from the very beginning, I had a sense that what I said mattered to somebody. I think that takes you a long way when you’re starting out.

As in Maysles’ work, the message of your films is humanistic, but the style is humanistic as well. You respect the humanity of the people you’re filming.

Oh, that’s such a compliment. I feel totally honored every time I’m making a film. I just can’t believe I’m doing it. It’s like starting over every single time.

What inspired you to make a film about Sharon Jones?

How could you not? [Laughs] I mean, Sharon Jones is one of the most amazing women I’ve ever met. Two friends of mine who I had worked with in the past, Stephen Mintz and Brad Abramson, called up and asked, “How would you like to make a film about Sharon Jones?” and I said, “Are you kidding? I would love it!” I had done a film with them called “Woodstock: Now & Then,” celebrating Woodstock’s fortieth anniversary. I respected them and loved them, and they were just perfect for me to work with. Then I met Sharon, and the very first day of filming was the day where they were cutting off her dreads and shaving her head. You get really close and you get really intimate when those kinds of things happen.

“Life Itself” began filming when Roger was still alive, and his death transformed the film into something else entirely. Was it always your intention to make Jones’ health struggles part of the film?

Yes. Of course, you never know for sure what a film will be about when you start making it. But for me, this film was about transformation. The physical transformation that Sharon undergoes happens to so many cancer patients when they lose their hair. As the film went on and the story deepened, we found that she was transitioning in front of our own eyes. She will still always be “the one and only Sharon Jones,” but she’s different now. She’s been through a personal battle and has emerged from it as a new person, a new woman, strong but in different ways. It’s like she has a deeper strength. She was also so great in the room where people were having chemo, in how she’d keep their spirits up. Every time she was there, people were smiling and talking to her, and she had such a positive attitude. She taught me that by having a positive attitude, by having perseverance, you can get through anything, and she did. 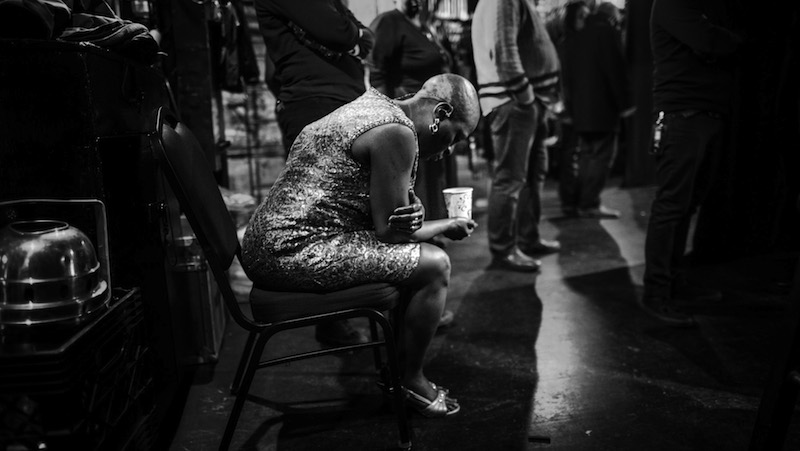 In some ways “Miss Sharon Jones!” is a fitting companion piece to your excellent 2006 doc, “Shut Up & Sing,” a film that also happened to be about perseverance.

Not be cliché, but I love making films about people who are willing to stand up for what they believe in, no matter what happens. That was true of the Dixie Chicks as well as the people of Harlan County. So many of the films that I’ve done are about perseverance. It’s wonderful to see how people change and how you, as a filmmaker, are allowed to film the transformations that people go through when they are standing up for themselves.

One of the most beautiful and courageous scenes took place at the Beacon Theatre. Sharon didn’t know who she was going to be onstage that night. I filmed her backstage, and she said, “I don’t know who I am anymore, I don’t know if I’m just going to stand there. I don’t know if I’m going to be so short-winded, I can’t move.” You see a shot of her before she goes on. She’s holding a drink in her hand, and her hand is shaking. She gets up to go through the curtain, and from the back, she almost looks like Mike Tyson ready to go out for a fight—with her beautiful broad shoulders and her bald head. There was such power in that moment, as well as a fear of the unknown.

Out she went, and she just took over the audience. She told them, “I may forget the lyrics,”—which she did, a little bit—and, “I may be short-winded, but I’m here, and I’m here before you.” The Dap-Kings were more like family to her than anything. When they saw that she was short of breath, they’d just keeping playing until she got her breath back and continued. That was one of the most beautiful things I’ve ever witnessed.

What has it been like keeping in touch with the subjects of your films, such as the women in Harlan County?

It’s pretty wonderful because now their kids and their grandchildren call me, since a lot of them have passed on. Somebody will call and say, “Hi, I’m so-and-so’s granddaughter!” and I’ll say, “Oh, fantastic! Great to speak to you.” So those links remain. I think that when you make a film, you stay linked with the people. You stay intimate with them, and that’s really important. You’re not just doing the film and moving on.

I was privileged to see your film, “Hot Type: 150 Years of The Nation,” at last summer’s AFI Docs fest. I later included it on my list of the year’s best films.

That’s so cool! We’re just getting a distributor for the film, and it’s going to be shown in journalism classes at colleges and universities. Hopefully [Nation editor] Katrina vanden Heuvel will take the film around to commemorate the 150th anniversary of her publication. They can show the film and follow it up with a panel discussion.

What led you to illustrate the cyclical nature of history by juxtaposing modern news stories with stories from the Nation archive?

Well, you exactly said it [laughs]. That’s exactly why I did it. I didn’t want to just make an archival film. I wanted to let people know that the struggle is not over and we have to keep going.

I loved the scenes featuring Georgia Reed-Stamm, the young daughter of executive editor Betsy Reed, who so thoughtfully contrasted her own developing political beliefs with those of her peers.

I just think that she’s an amazing young woman. I’ve been living with my niece since she was two weeks old, and she’s now six. Children are so politically astute. They have such a sense of loyalty and justice. It’s almost like they’re young people going on 17 or 18.

My cousin, writer/producer Jeremy Scahill, was an investigative journalist long before he made “Dirty Wars.” Would you consider the roles of a journalist and a documentarian somewhat similar?

I believe many filmmakers were inspired by how you put your own life on the line while making “Harlan County, U.S.A.”

I was really young and probably didn’t know any better.

Would you have made it differently today?

No, of course not. I’m just the same. I still don’t know any better [laughs].