Making John Lasseter Cry: Pete Docter and Jonas Rivera on “Inside Out”

What makes us tick? After going deep underwater, into outer space, and into our toy chests, Pixar took on their biggest challenge by going into the uncharted territory of a pre-teen girl’s emotions with “Inside Out,” opening this Friday. After its premiere at the 2015 Cannes Film Festival, the buzz was deafening that this marked a return to form from the revolutionary studio that gave us “Toy Story,” “Finding Nemo,” “Up” and “WALL-E.” The buzz did not lie. Director Pete Docter (“Monsters Inc.,” “Up”) and producer Jonas Rivera recently sat down with us to talk about the response to the film, making movies that work for both parents and kids, and the amazing Pixar process.

A little off-topic but something that’s always intrigued me—how are the accompanying shorts chosen? Is there a tonal consideration to match the feature film?

PETE DOCTER: You’re giving us too much credit. “What do we have?” (Laughs.)

JONAS RIVERA: I remember going back and “The Incredibles” had “Boundin’” and I remember thinking that was cool.

But you don’t have a choice, right?

PD: No. It’s the one that’s available now and we love it and it’s all good.

JR: Although the sound designer for “Lava” also designed the sound for our movie. I like that the film does sort of bob in the ocean and then segues into the opening of the film in a way that’s consistent.

Absolutely. That’s what made me think of it.

PD: Good. Right on. We should take credit. (Laughs.) 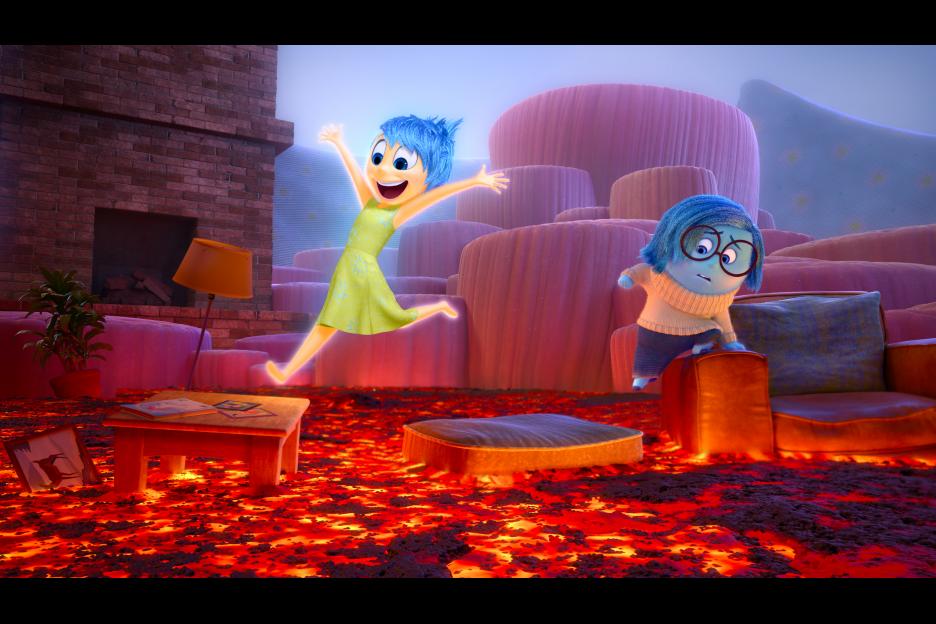 With something like “Nemo” and “WALL-E,” you’ve at least got visual road maps—what the underwater world looks like, film representations of outer space. With this, you really don’t. So where do you start?

PD: Those kind of things led us in specific directions. Then we gave our artists free rein. I gave them character descriptions and descriptions of sets. And then they would just start drawing.

JR: “I lost my train of thought.” Oh, that’s an idea, and then that starts to feed design. It has to sort of hold up the writing.

PD: In story, we would make a big list like “Brainwashing,” “Stream of Consciousness”—some of it made the film.

JR: The challenge is for the audience to see it and be like, “Of course, this is how the mind looks,” which is our ultimate goal.

The film never plays down to gender roles. She doesn’t play with princesses; she plays hockey. How consciously did you choose to not make this a “little girl” or “little boy” movie but just a movie about kids?

PD: It is a girl for a specific reason: It was based on watching my daughter grow up. Also, in doing the research, we learned that there is no one more socially attuned and aware than an 11 to 17-year-old girl. That seemed right. Again, watching our own daughters—my daughter was a great example of wearing pretty, pink sparkles and then going and playing in the mud. Playing sports. Tap dancing. A mix of things. We also had great female contributors both in the story department and Meg Lefauve is one of our writers. It’s something we wanted to do.

JR: We have daughters. We were excited to have a character who felt like a real girl. 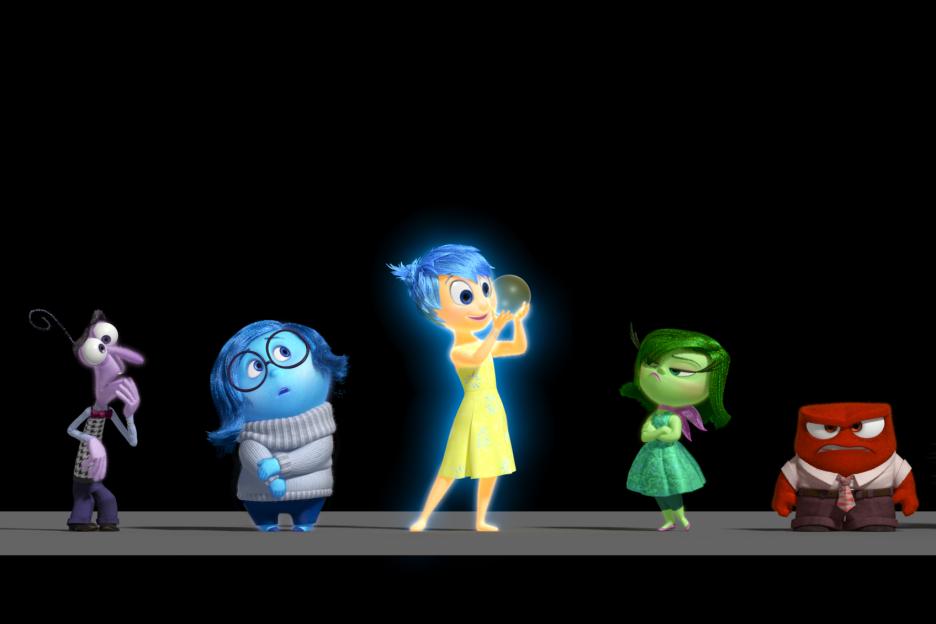 How much is based on your own parenting?

PD: I don’t think the movie would have come to me if I wasn’t a parent. I don’t think it would have resonated with any of us. Jonas has younger kids. My daughter was 11 when we started—right about that age. And our co-director—Ronnie Del Carmen—also has kids. I would note how she was changing, getting quieter, and Ronnie would be like, “It gets worse.” It’s like a cautionary tale in one sense.

JR: We had a three-way view of everything. I sat forward when you pitched it because I thought of myself and my kids. We said, “Everyone has either had kids or been a kid and felt this touch of this from either side.” Our hope was that would kind of hit and touch everybody.

PD: For me, when I’m watching my daughter, part of the reason things stick with me is because of my own junior high years, which were difficult, which a lot of people can relate to—the trouble of growing up.

So much of this movie feels like it plays to parents more than kids, which I don’t mean in a bad way, but how do you balance going too far with that and losing the children in the audience?

PD: I feel like our design sense—a lot of things that come with the way we use the medium—envelops kids. They love the use of color. The sense of design that we gravitate towards. First of all, I’m not sure if I was making a more adult film that I would choose these emotions and portray them the way we did. But subject matter-wise, we’re trying to impact each other. As we build the reels, we want John Lasseter to cry. At the same time, we know kids will see it and we have that concern, not so much that something would be inappropriate but maybe too complex. We had a screening maybe two years ago. We brought our own kids and friends and family—filled the theater with kids about 3 to 14. It was really cool because not only did they get it—we had a 5-year-old come back and tell us the entire story, name all the personality islands, explain how they work and the emotions and everything. 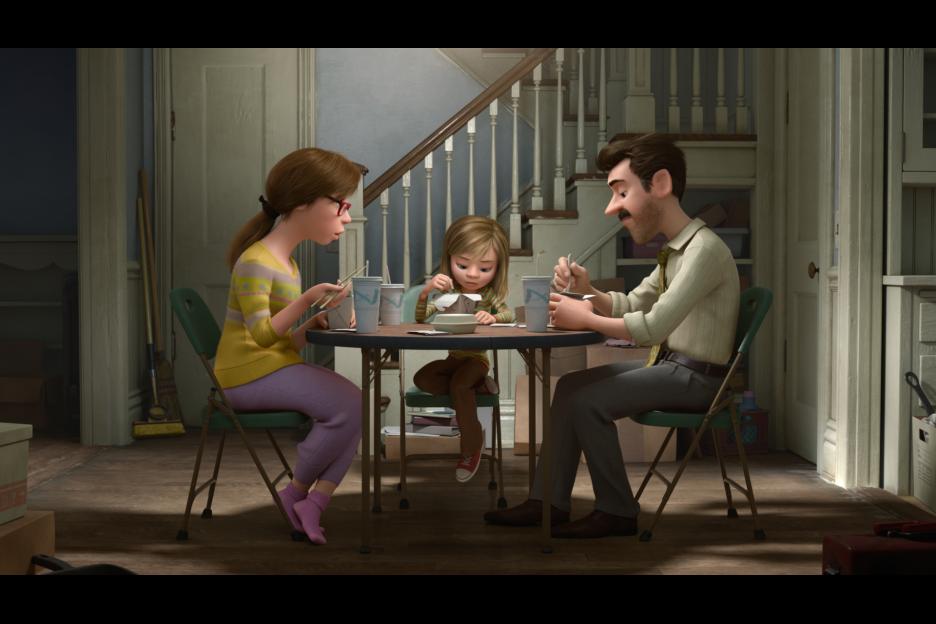 JR: I do too! We just load-balance it. We make sure it’s entertaining enough but deep enough for parents. And fun, like the movies we saw for kids. All of those things. I almost found, in a strange way…kids read it better. I’ve talked to a couple parents who are right in front of their kids who have just explained it really well, and they say, “I don’t know if my kids got it.” I just heard them get it.

This movie doesn’t work without the right voice cast, especially the tonal balance of Amy Poehler’s take on Joy.

PD: She recognized right away—we were pretty up front with her with the difficulty of that part: if you write her TOO positive then you don’t trust her and you don’t like her. She can’t be a downer, angry person or she doesn’t read as joy. We presented it to Amy and she just said, “I think I can help you there.” She kind of knew what to do. She said, “I can’t get away with saying things that other people can’t.” She’s pretty self-aware.

JR: Amy was really clutch. She even came on and wrote with us for a while. Our first session was just her going through the script with us and she would come up with ways to say things that was helpful to us. She threaded a narrow needle of likability with a little bit of tooth.

You mentioned making John cry. Can you speak a little about the Pixar process there? At what points are people like John or Andrew [Stanton] involve in a film like this one?

PD: We like to use John as a surrogate audience member because he’s really great at intuiting how people react to things. At the very beginning, when you’re pitching the concept, if he leans forward, you know, “OK, we got something. He’s hooked. He sees the potential.” Generally, we’d say there are 2 to 3 months between check-ins…

Over how long a process?

PD: Five years. We may meet more frequently to look at specific designs, but, as a story, it’s every 3 months. 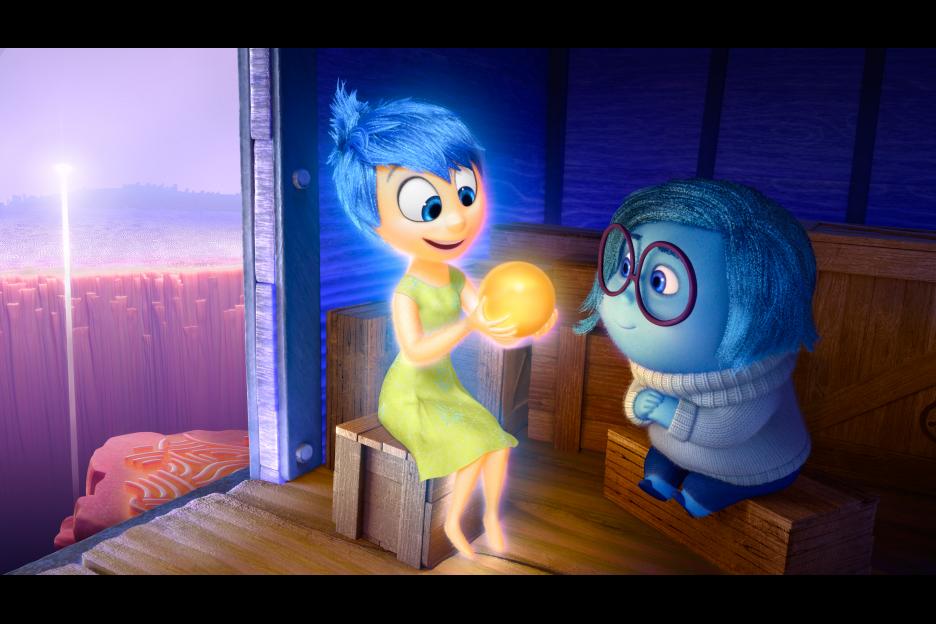 PD: Jonas and I, Ronnie, our head of story, our editor, our production designer, and John comes in. We’ll pitch, read pages, look at a cut of the movie or just a scene.

JR: We bounce ideas around. And it’s not for John to say, “Approved.” It’s just to discuss the movie. “You had said something earlier about this, let’s try this,” whatever it is. John is a strange, amazingly talented, finger-on-the-pulse-of-the-world kind of guy.

PD: Early on, he said, “Think about going into different people’s brains because that’s going to be really fun.” Of course, that’s the biggest laughs in the movie. He’s also really great at understanding when things are too complex.

JR: He’ll pull you back to your course.

With such a long process, it has to be so simple to stray from your original idea.

PD: Yeah. “Toy Story” was like that. At the time, it was John directing and the check-ins were with Disney. Pretty much. There are no rules. If something is taking longer or you want to meet more.

Were you guys a little surprised by the rapturous response out of Cannes?

JR: We’re really proud of the movie and we like it, but, to your point, you get so close to the movie that you don’t really know what you have. You get these little mini panic attacks like, “Oh my God, this doesn’t even make SENSE.” And then we got out there…

PD: We were fairly proud. This is a movie I’m proud of. But you don’t know if people will like it. And they warn you before you go [to Cannes].

JR: They booed poor Gus van Sant. They kind of remind you of that atmosphere. It was a very warm reception. We couldn’t have been more pleased. We walked out of there feeling pretty good.