Joseph Gordon-Levitt met with a small group of journalists to talk about the film he wrote, directed, and stars in, "Don Jon." Gordon-Levitt, who has appeared in edgy independent films ("Mysterious Skin," "Brick"), teen romances ("10 Things I Hate About You"), ambitious, big-budget special effects films ("Inception," "The Dark Knight Rises"), and prestige dramas ("Lincoln"), began acting as a child, first appearing in the popular sit-com "Third Rock From the Sun" when he was 13. His grandfather was also an actor-turned-director whose films included the classics "Cyrano de Bergerac" and "Pillow Talk."

In "Don Jon" Gordon-Levitt plays Jon, a New Jersey guy who prefers pornography to real relationships, indeed to pretty much everything else. He starts dating Barbara, played by Scarlett Johansson. "This is a guy that everything has to be in the right place. He has very rigid expectations of what a man is supposed to look like and the hair is certainly part of that. And he keeps control. So he has got a pretty extreme version of it, and a lot of gel in his hair. Both the Jon character and the Barbara character are people who are very intent on fitting into the conventional idea of what a masculine man is supposed to be and what a feminine woman is supposed to be. They are both very concerned with their looks and they put a lot of effort into their looks. They use their looks to get what they want, and are disappointed with life because if you are so busy trying to fit yourself into a mold, you're going to miss what's actually beautiful about life, which is what makes people unique, not what makes everybody the same." 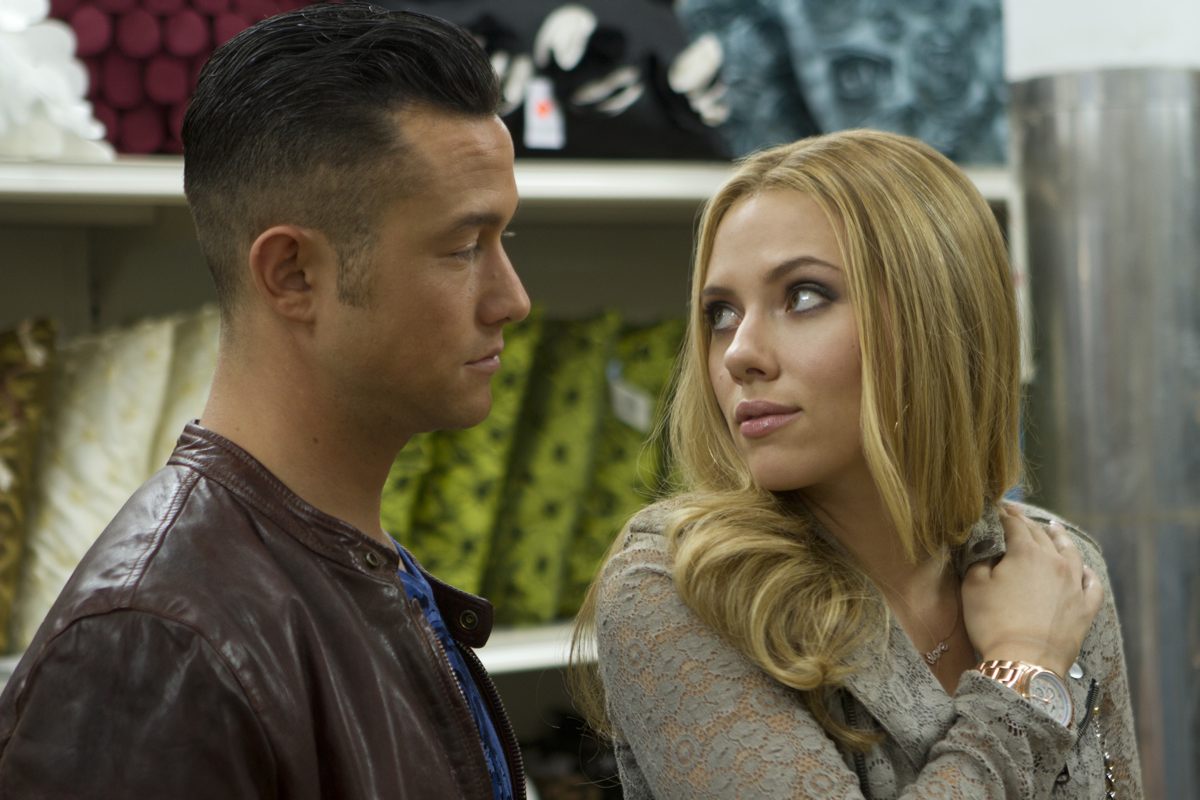 Jon, Barbara, and many of the other characters in the film struggle to find a way to connect. "Everything in Jon's life is sort of a one-way street. He is not connecting or engaging with anyone. That goes for the women in his life, that goes for his family, his friends, his church, even his own body. It's an item on a checklist. He doesn't listen; he just takes. At the beginning of the movie, he is finding that dissatisfying because there's the sequence where he brings a young lady home from the bar and he is comparing her to this checklist that he has got of what he likes to see in a pornography video. Obviously, a real human being is not going to map onto that because there is a fundamental difference between a human being and an image on a screen."

"So he looks for what can satisfy him. The first thing he tries is the sort of conventional moral high ground: what your parents would want you to do, what his parents would want him to do—which is find the prettiest girl in the room and make her your girlfriend, your quasi-wife. So he does that and he follows all the rules and does what he is supposed to do. But he is still not satisfied because, again, if he is just doing what he is supposed to do, if you are just fitting into the mold, you're not connecting. They don't listen to each other. They are not really paying attention to who each other is. They are sort of projecting onto each other what they think the other is supposed to be. And she is doing it to him just as bad as he is doing it to her. I want to talk about how people treat each other more like things than like people sometimes and how media can play into that."

"And I guess this comes from my own personal experience of growing up working as an actor. Actors in our culture do get stigmatized and treated like objects on a shelf sometimes. But I don't think it's just actors; I think everybody experiences this. I'm sure you all have. I have, you have. You are talking to someone and you can tell they are not listening. You can tell they have already decided what you are and put you in a box with a label on it. This is what I was trying to make fun of. And I do think that the media contributes to that. That's where I came to the idea of a relationship between a young man who watches too much pornography and a young woman who watches too many romantic Hollywood movies. They've both got these unrealistic expectations that they've learned from these kinds of media that they consume and it leads them to objectify people or to not connect. That's the origin of where it came from." 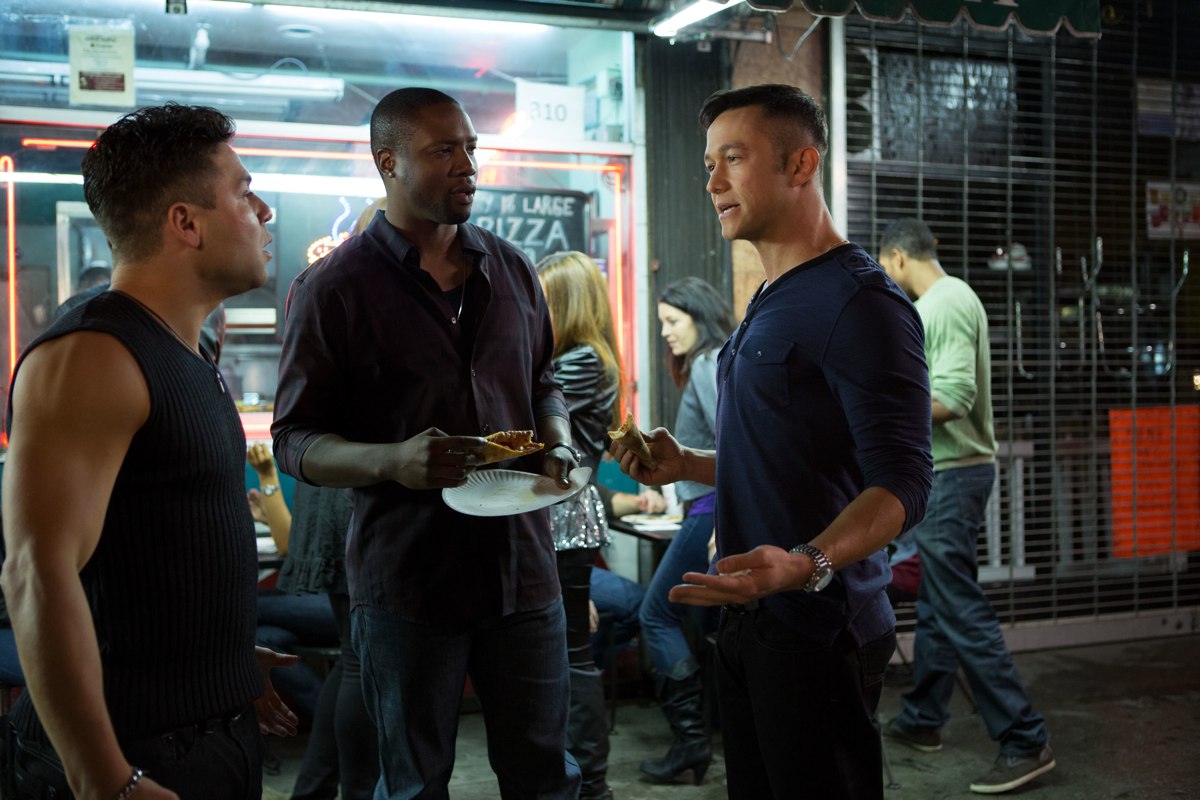 He talked about what he learned from the directors he worked with and how he used three different styles in this movie to create different moods. "The year leading up to shooting "Don Jon," I worked with Rian Johnson on "Looper" and Chris Nolan on "Dark Knight Rises" and Steven Spielberg who made "Lincoln." So I had a lot to go on. I was certainly watching carefully. But I've always loved watching. I spent my whole life on sets. I started working when I was six. I've always paid a lot of attention to what directors have done and what everyone else has done: what they are doing over here in the camera department or how they put together the set or what the script supervisor is up to, all those notes that they take, how is it, what is that. I really like being a part of that team, being a part of something larger."

"I really wanted this movie to have a flair to the filmmaking. Especially comedies, it seems, often stay pretty conservative and just leave the comedy to the writing and acting and the rest of the filmmaking is very standardized. I didn't want to do that. I wanted the filmmaking to reflect what was going on with the character and the evolution of the character. We divided it into three acts, which is the standard story structure in a 90-minute movie. In the first act, when you meet Jon and his kind of world, the camera was all very kinetic, a lot of camera movement. The cutting was really fast and the music was all made of these big shiny synth sounds."

"Then, in the second act, once he is getting involved with the sort of traditional romance, the cameras are on dollies a lot. There is a lot of sweet, gentle movement. The cutting is very traditional Hollywood cutting, Frank Capra/Steven Spielberg-style classic Hollywood editing style. And the music is classic Hollywood orchestra. And then, in the third act, when he is broken down and starts to get more curious and break out of his mold, the camera is almost all handheld, there is a lot less cutting, and the music gets really sparse and it is just played on a few guitars. So that was the idea to have the filmmaking move along with the evolution of the character." 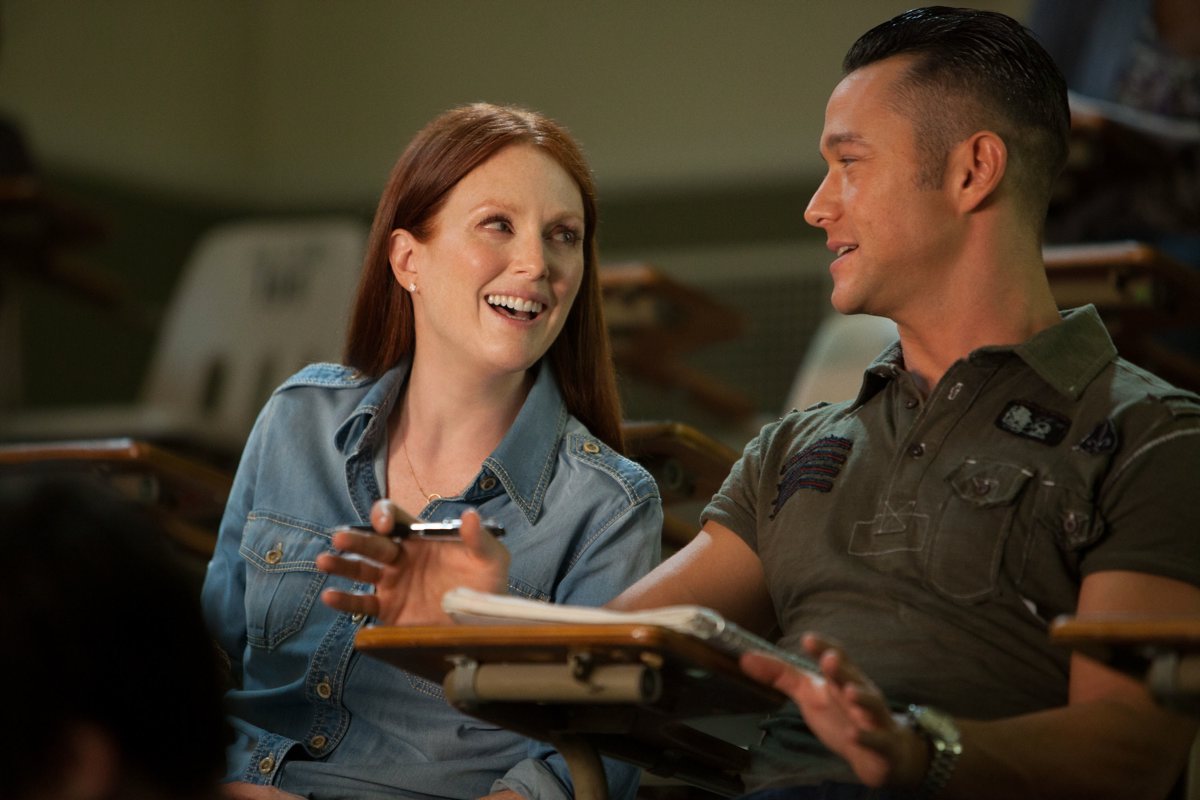 The title is a reference to the literary character Don Juan, an elegant, sophisticated man famous for seducing many women. But Jon lives in suburban New Jersey. "I don't think it's singular to any particular place or culture. He is Don Juan. Don Juan is an old classic literary figure. I did want to make it just a normal guy. I'm from the suburbs of LA and New Jersey is the suburbs of New York. I didn't want to set it in like a cosmopolitan affluent setting where a lot of romantic comedies are set in Manhattan and London. I wanted it to be like normal, middle-income, suburban America because I think everybody knows people like this. We all are to a degree people like this."

Gordon-Levitt cast his 1994 "Angels in the Outfield" co-star Tony Danza as Jon's father. "That was a blast. Tony is such a good-natured, sweetheart of a guy which was funny having him play this character because Jon's dad, Jon senior, has a short temper. He doesn't listen to anything his family says and he is sort of a lecherous dude. It doesn't come naturally to Tony because on screen, his instinct is to be likeable because that's just how he naturally is. So I kept having to tell him like, 'No man, I like you too much, you have to be willing to be a little less likeable'…. But if the dad character was just a demon, it would be off-putting. I think he still has to have that charm and that's important."

His HitRecord collaborative production venture has just announced a new partnership with the Pivot channel. "I have really grand, fanciful ambitions for all sorts of things that aren't ready to be articulated probably yet. I'm just a very grateful man. I have been doing this for a long time. On the one hand, I never necessarily thought that I would have such fortunate opportunities. But on the other hand, I have got to say that part of doing well at anything, I think, is believing that you can do it. I always had parents that told me I could, told me I was good at what I was doing and supported me with what I was doing. I think you have to have that balance between the humility of not being too full of yourself; but on the other hand, believing in yourself and recognizing. There is a quote that I think is attributed to Nelson Mandela. He said that our light is more frightening than our darkness because if you look at the darkness within yourself, you can make excuses and shirk the responsibility of having to do anything and say, 'Well, I'm not capable.' But if you recognize the powerful light that is in yourself, that we all have within ourselves, that's scary because with that light comes a certain responsibility to live up to it and do something. I love that quote. I think about that a lot. I don't know, I might be avoiding your question or something. I guess my answer is you ain't seen nothing yet."

You can find a version of this interview, along with many other interviews and reviews, at Nell Minow's MovieMom blog.