Freedom of Mind: Karyn Kusama on "The Invitation"

The many secrets of Karyn Kusama’s “The Invitation” are best left sealed, but the thriller has its own verve as a tale of dealing with trauma. Haunting the niceties of the film’s focal dinner party is a grave loss suffered by two people years ago, Will (Logan Marshall-Green) and Eden (Tammy Blanchard). Two years after their young son died, they are now reunited in their new lives for a gathering held at the Los Angeles house they once shared as a family, now owned by Eden and her beau David (Michiel Huisman). After receiving a lavish invitation in the mail, Will attends the party with his girlfriend (Emayatzy Corinealdi), and are joined by friends mutual and not mutual. As Will explores the house while strange things start to happen, he experiences triggers to a trauma that he’s tried to suppress; meanwhile, Eden becomes vocal about her own way of coping.

Kusama broke into the film world with her boxing drama “Girlfight,” the winner of the Grand Jury Prize at the 2000 Sundance Film Festival (the film went to Cannes as well). Her sophomore effort was the 2005 tentpole “Aeon Flux,” featuring a sleek Charlize Theron in a role best described as “P.F.”—“Pre-Furiosa.” In 2009, Kusama directed the demonic female friendship comedy “Jennifer’s Body,” starring Amanda Seyfried and a comedically underrated Megan Fox. Having since worked in television on shows like “Billions” and “The Man in High Castle,” Kusama makes her return to feature films with this SXSW 2015 hit, from an original screenplay by Phil Hay and Matt Manfredi.

RogerEbert.com spoke with Kusama about her new film, the vital horror of tragedy, why we need studio systems, and more.

This story seems very specifically set in Los Angeles, with elements of upper middle class and some big whiffs of character entitlement. But how specifically LA was this film to you?

It is incredibly specific to Los Angeles. We had moments where we discussed the possibility of shooting elsewhere, and the more we really investigated all of our driving interests in the film, it just became clear that we had to shoot it in Los Angeles, because even though it is a largely interior space, it just feels like there is something about the mythology of Southern California, the sense of self-reinvention that is promised here to so many people who kind of flock to the city, the sense of spiritual quest and spiritual searching and spiritual dwelling and fringe movements that have been born here in Los Angeles. It felt like the right place to set the story, and it felt like home also to us. there was just something on a practical level to be making a movie about the place we live.

What was your personal entry to the story, or the motivation for why you specifically wanted to tell this story?

I think for me, over the years I have really had to investigate my personal sorrows and the tragedies that have visited me over my lifetime. I have had to really grapple with the fact that while I wish things could be different at times, I ultimately needed to experience the transformation that comes with pain and loss and sorrow. And there was something very interesting to me about depicting a night in which one character is confronted by the idea that maybe all of that pain is unnecessary. What does that mean—not just for him, but for us as a larger society—what does it mean to negate our pain, or to seeing that as useless? What it boils down to for me is that it’s pretty horrifying. I kind of decided to run with that gut feeling, and the film … even though as a thriller it’s structurally very inventive and interesting to me, there were aesthetic things that interested me about it tremendously. It ultimately was that emotional questions it was asking that kept me engaged.

There’s a scene early in the film where Eden slaps one of her guests, and immediately after tries to shut down any bad blood by handing them a wine glass, and saying she should be forgiven, the act forgotten. It’s a bizarre moment of entitlement to forgiveness, or to avoiding pain. It’s a very unnatural way of how to look at things.

I think that idea that sort of our emotional self and our emotional life is a faucet that you turn on and off, and that we are in control of it entirely, that’s a really appealing idea for a lot of people. But there are certainly the times where it’s appealing to me, but it never quite works the way I hoped it would.

As the word spreads about “The Invitation,” how much of the story would you prefer be kept a mystery?

I definitely think that this is one of those movies, now that I’ve been able to see it in screening environments at festivals, the less you know about it, the better going in. I personally think that’s part of what makes it a really satisfying theatrical experience. You’re sitting in the theater and you just don’t quite know what is going to happen or why, but there are so many questions generated in the experience of watching it. It’s more satisfying.

One directorial choice I found really refreshing was that right off the bat, in the first few shots, we are presented with an interracial couple in a thriller. Was that a conscious decision, or just casting?

It’s interesting, it didn’t start that way on the page. It was really meant to be a portrait of a relationship that we have a lot of questions about, sort of on the one hand the survivability of the night—can any relationship withstand the social pressures of this dinner party? But once we cast Logan Marshall-Green and I had met with Emayatzy [Corinealdi], I just felt like there would be a further interesting layer to the fact that they were an interracial couple, and that there might be something that could kind of indicate a new start for Will that he really was departing from any societal expectations or norms. And also I just felt like, I could personally watch Emayatzy wash her face, I’d be entertained. So there was a component of being really feeling drawn to the sympathy and the empathy of the watchfulness in her face, and I just felt like they made an interesting couple. 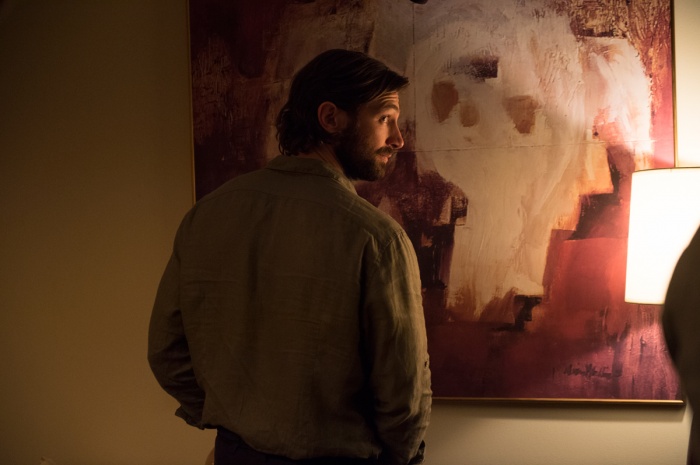 I saw you do a Q&A for Jennifer’s Body many years ago. One thing you mentioned that really stuck with me was the “director’s jail"—

—which you mentioned specifically in regards to trying to work after “Aeon Flux.” Aside from how disturbing and the sexist the “director’s jail” idea is, I was just wondering if the concept has changed in your mind since then, from what you’ve seen in the business?

Look, I don’t know why … I guess because there aren’t many women working in the kind of variety of spaces that I’ve had the opportunity and privilege to kind of work in, that there is this extreme scrutiny about my career. And I just don’t know what the value of that scrutiny is, except perhaps to point out the relative rarity of my career trajectory.

What do “Aeon Flux” and “Jennifer’s Body” mean to you now?

I look at those movies as being learning experiences, I look at them with a lot of fondness a lot of the time. I definitely feel like I had to unpack a lot of sort of catching up to what the business is, to how changeable and to how in many respects unstable, and yet how necessary it is to sort of keep movies in theaters. We need studio systems, we need money to sort of be organized in a way and resources that are organized in a way to create some infrastructure to get movies made. I just look at it as part of my—what I hope is a very long—learning curve about the business aspect in making movies, and more importantly the art form itself. That’s the most important thing for me is just figuring out how and if I’m growing as an artist. I felt like I would be able to do that with “The Invitation.”

How did you feel you were able to grow with this film?

Making the film for a low budget allowed me creative control that I hadn’t had for a while. I had final cut on this film, and I just was able to really engage in it purely for the film itself. I wasn’t in it for the money, that’s for sure. And in a way, that kind of financial austerity allowed me total freedom of mind. I just wanted to be thinking in the cleanest, clearest way possible about what I wanted to achieve with the film, given my limited resources. It was a really satisfying, creative experience. In a way, those limitations help me define the vision of the film as I was sort of working on it, and I liked having to kind of exercise my brain that way again.