With standing ovations at Venice, Telluride, and Toronto, Tom McCarthy’s “Spotlight” instantly became one of the most talked about films of 2015. The true story of the Boston Globe investigation into sexual abuse in the Catholic Church, and the cover-up that allowed it to go on for decades, is a lean, tight procedural, a film that captures smart people doing important work—a surprising rarity in modern cinema. Without melodrama or manipulation, McCarthy drives “Spotlight” forward, using his notable strength with ensemble and dialogue to ground the piece in ways that heighten it. While some may have considered the writer/director of character pieces like “The Station Agent” and “The Visitor” an odd choice for such a prestige picture, he turns out to be the perfect one, as his remarkable ability to write and direct three-dimensional characters makes the issues of “Spotlight” relatable and human. With fantastic ensemble work by Michael Keaton, Mark Ruffalo, Rachel McAdams, Liev Schreiber, John Slattery, Brian d’Arcy James, Billy Crudup and more, “Spotlight” is going to be one of those films that stays in the conversation for months and years to come.

McCarthy gave us a call a few weeks ago, after the film’s amazing festival response and before its release, to discuss the true story, the current state of journalism, and his craft.

Something I’m interested in lately is when a piece of work comes along for an artist—timing. And so I’m wondering how “Spotlight” speaks to where you are in your career now and how it might have been different if you made it five or ten years ago?

That’s a very good question. It’s probably a little bit difficult for me to answer it—people around me could answer it better. You know, look, making movies is a very humbling process. I’m five movies in now. You learn on every one. You really do. I will say that with this particular project—I made “The Cobbler” right before this and it’s a movie that they went after me on. I was trying to make “Spotlight” before it and we couldn’t get it [together], so I thought, “I’ll go make this fun movie before it.” Making the movies so close together was incredibly helpful to me as a filmmaker—they were all lessons I was taking with me. Making movies two or three years apart—I don’t want to say you forget but you’re not as sharp maybe. I felt very sharp coming into “Spotlight.” I felt ready to go. Every film you kind of learn. You make mistakes. You do things right. And you grow from it. I feel like one thing was that I was so comfortable with the ensemble. We have a big ensemble, which is unique for me. And the scope of this—I felt ready for it. It felt like a continuation of the work.

At Telluride and Toronto, there were comparisons to ‘70s procedurals and films like “All the President’s Men.” Were there any conscious cinematic inspirations for “Spotlight”?

I think it’s cool about this movie that there is a procedural element to it. It’s sort of like an engine down there, humming. That was a fun thing to lean on when we needed to. There’s both dramatic and thrilling elements, but it’s tough to pigeonhole it as one thing or another. Maybe “All the President’s Men”—that’s a thriller. [Director Alan J. Pakula] built that thing like a lean, mean, paranoid thriller, and it operated so beautifully in that way. We didn’t feel like that was our movie. It was a movie we respect and appreciate. I’ve certainly said this before, but Sidney Lumet’s films had a major impact on me. All of his movies. He was so efficient with the camera. He really, really trusted space and performance. He was great at blocking. He took the moment to find what a scene was about. He told me that. I remember I was having a panic attack before “The Station Agent” and he said, “Look, if you know what a scene is about, it will block itself. You’ll KNOW where to put that camera.” He was right. I always find that when I don’t know what I’m doing with the camera, it’s because I don’t understand the scene. We haven’t been honest to the scene.

I’m not a director who studies movies as I’m approaching my work. I kind of get a sense of what’s inspiring me and then I leave it. I can’t watch movies during production. I want to go where the script is leading me. To that end, we kind of took an inspiration from the work of the reporters. We spent a lot of time around them. How the world felt. How unadorned it was. What their lives are like. They’re middle class folks getting up early and working really hard. And we just wanted to capture that in a way that didn’t feel sensationalized or romanticized. We just wanted to present it. I think that is, in many ways, driving us. Even our design and costumes—you don’t really notice it. You can tell they all have uniforms. I think that kind of spirit started to inform all levels of production. It started with the script and the connection that both [co-writer Josh Singer] and I had with the reporters. 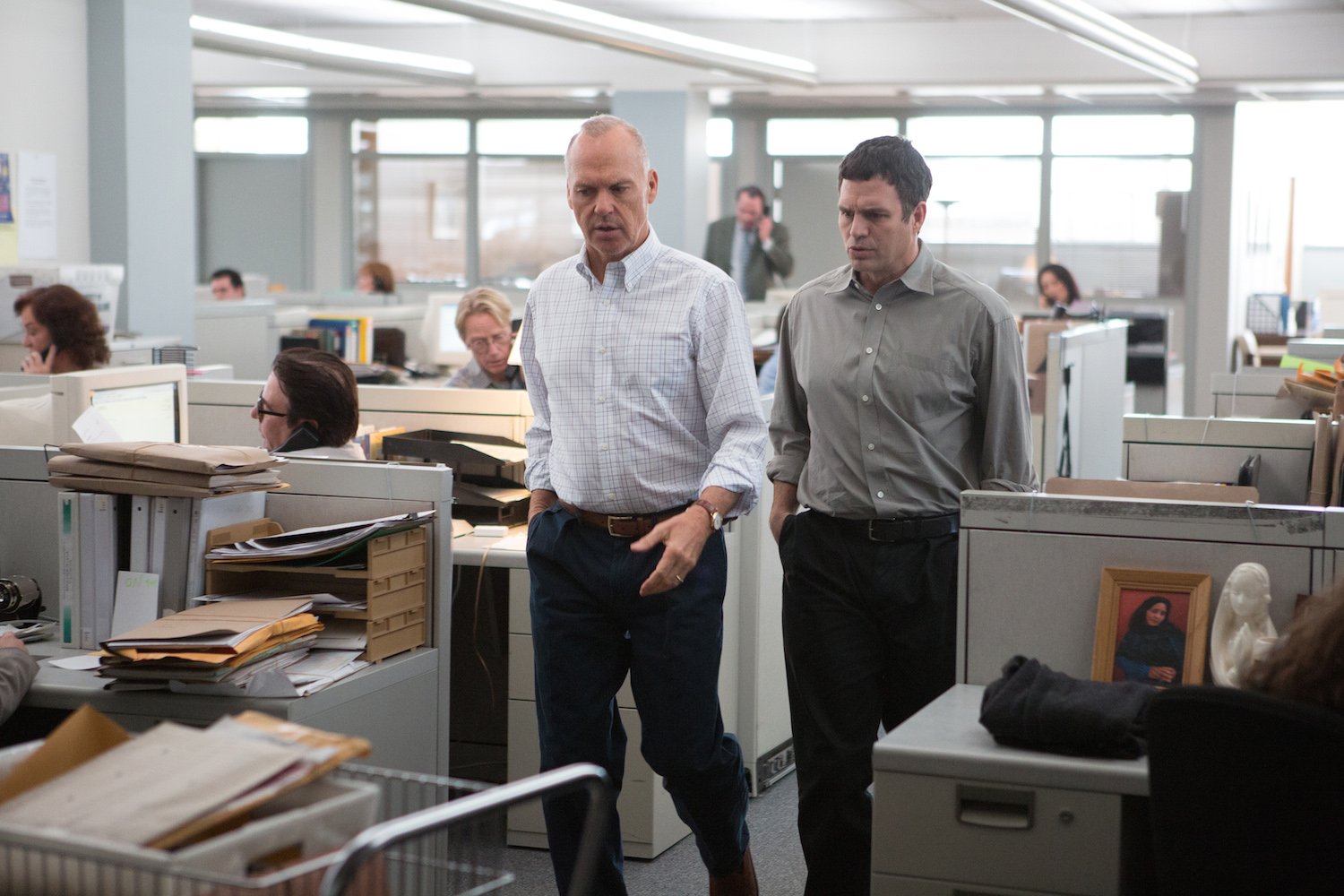 You’re also jumping into the pool of “true story” and the issues of “getting it right” and being true to the people. I’m always fascinated by that line between reality and art. How do you balance that personally? Did you have moments where you thought, “he might not have said that in real life but it works for the film"? How do you make those decisions?

We’re a little bit dictated just by the amount of information in this film and how we’re presenting it. We found in talking to the reporters that they’re constantly repeating information to each other and sharing information with each other. They’re always looking for overlap or connection. That kind of teamwork of journalists is what we found interesting and compelling. It’s funny—we got into rehearsals and some of the actors were like, “I’m repeating what he said six pages earlier." Yes. Exactly. It’s going to pay off because they’re putting it together. They’re feeling around in the dark and waiting for the light to turn on. I had to tell the actors to trust me, and even though it feels expositional it’s more active than that—it’s part of a process. We’re not just doing it so the audience understands it, we’re doing it so these reporters connect the dots. If we do it right, it will be compelling in its own way.

There’s a cinematic element to it as well in that it gives the piece a textual rhythm almost. Like a beat.

Exactly. Speaking of that, it’s always a question of how you make information like this cinematic. In talking to different cinematographers, some guys were just like, “I don’t know what to do.” Other people had an immediate sense of what they wanted to do. How do we crack this? That’s the exciting part of the process. I don’t have all the answers but how do we do it? That’s the best part of the process. Two things. One, we have a lot of information—how do we present it? We started developing our style—handheld, when we wouldn’t. When do we lay back? When do we push the camera? What was interesting was that we didn’t know where we were going yet because we were staying true to this ensemble. We don’t know what reporters we’re going to be following next. We’re hopping around to different characters. And that kind of energy between them as a unit and as a team creates its own sense of propulsion and style. Suddenly, walking into a library becomes interesting. I don’t know why.

Is a little bit of this something of a call to arms for our journalistic industry, who has, in certain ways, let us down in the last decade or so?

I think so. But who’s at fault there? There are a lot of great journalists who have been laid off. Look, the reason the Spotlight team could crack this is because they were so supported. They had the time. They had the resources. There’s that one little bit when the reporter shows up from the Herald and sees the Spotlight team and asks why would they be here. It’s a non-event that some stringer should be covering. [Mark Ruffalo's character] Mike had to be there because he was following a lead. You need the support to do that. And you also need to be an insider in the community, which these people were.

Today’s economy doesn’t allow for that.

No! And because of the changing times, there’s kind of pushback against it. It’s just like in our industry. Get it done faster. 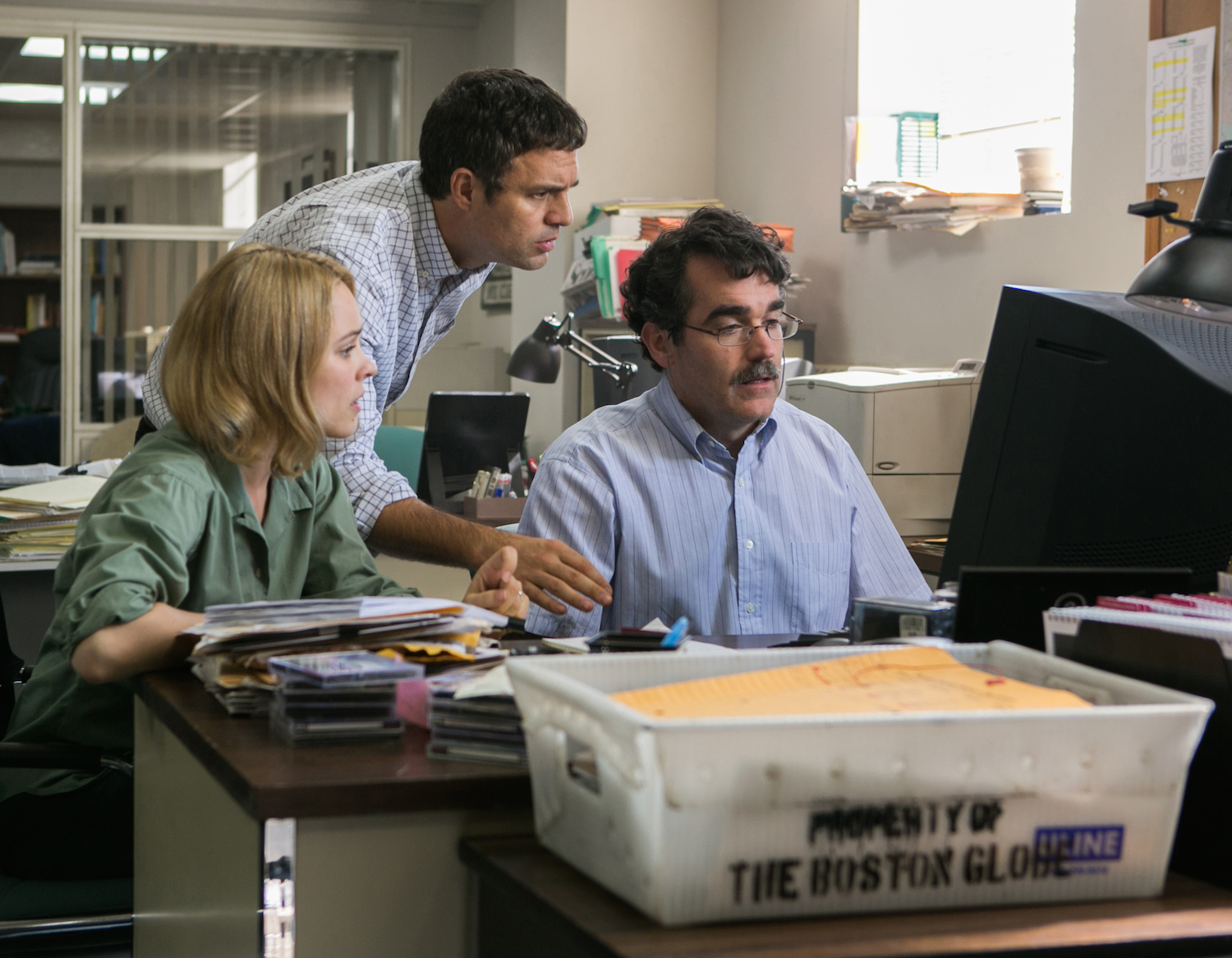 You talk about the nerves in prepping and how you enjoy that, but is there a different kind of nerve when you’re working on an “important” true story about such a sensitive subject? You don’t want to get this story “wrong."

I think you feel a greater sense of responsibility. I do think the reporters are the heroes here. And we spent a lot of time with them and have a great amount of respect and affection for them. And we sat with a lot of survivors and heard their stories. It’s an important issue and it needs to be dealt with before more lives are ruined. We felt like, “Wouldn’t it be great if this movie works and actually has an impact and can get people talking?” Talking about abuse. Any kind of abuse. And, also, as you mentioned, what is the state of journalism? What happened here is great. We need more of that. We need reporters breaking down the door on gun control or on government spending or on political contributions. What’s the next great story that’s going to have an impact?

“All the President’s Men” inspired so many journalists. We have to inspire thinkers that can revolutionize the industry of journalism. No one’s cracked the code. We know new media isn’t just the answer. We need legacy media. But it can’t work.

No one is willing to pay for it.

Yeah. So, how do we combine it and figure it out on local levels? I’d love to see a young person crack that code. “Here’s how we can do it—set it up as a non-profit and connect it to a university in every city …” Whatever it is. What’s the answer there? There has to be one. We can’t do without.

My concern is that there’s a whole generation now that’s just not interested in getting into journalism. I half wonder if the internet didn’t kill investigative journalism.

I totally agree and I think there’s this misconception that there’s more information than ever and “citizen journalists.” That’s like saying “citizen director” or “citizen fireman.” It’s not the same. We need pros. Listen, I do a fair amount of these and you know when you’re talking to a journalist—someone who gets it and comes ready and has original questions and is pushing you—and when you’re just talking to someone getting their soundbites. It’s so fricking clear. And, look, as a guy who has to do way too many of these interviews, it’s really nice to sit with someone who’s smart and have a conversation.