It's really funny how people see me and treat me, since I'm really just a simple, boring person. So says Finbar McBride, the hero of "The Station Agent." Nothing in life interests him more than trains. Model trains, real trains, books about trains. He likes trains. Finbar is a dwarf, and nothing about him interests other people more than his height. It's as if he's always walking in as the next topic of conversation. His response is to live in solitude. This works splendidly as a defense mechanism, but leaves him deeply lonely, not that he'd ever admit it.

Finbar is a character of particular distinction, played by Peter Dinklage as a man who is defiantly himself. Rarely have I seen a movie character more present in every scene. He is the immovable object, resisting approaches by strangers, and at first no one can get through his defenses except for a little African-American girl who looks straight at him and is not intimidated and will not be dismissed.

As the movie opens, Finbar is working in a model train store owned by apparently his only friend in the world, Henry Styles (Paul Benjamin). Henry drops dead, and Finbar inherits from him an abandoned train station near a town with the unlikely but real name of Newfoundland, N.J. Nothing prevents Finbar from moving immediately to New Jersey and living in the station, and so he does, exciting enormous curiosity from Joe Oramas (Bobby Cannavale), who runs a roadside coffee wagon on a road where hardly anyone ever seems to stop for coffee. Joe has unlimited time on his hands, is lonely in a gregarious rather than a reclusive way, and forces himself into Finbar's life with relentless cheerfulness. Cannavale is such an eruption of energy that the two quieter characters almost have to shield themselves from him. There's humor in Finbar's persistent attempts to slam the door on a man who totally lacks the ability to be rejected.

There is a third lonely soul in Newfoundland. She is Olivia Harris (Patricia Clarkson), who is going through a divorce and is in mourning for the death of her child. Olivia is a very bad driver. As Finbar walks to the convenience store one morning, she nearly hits him with her car. At the store, he has to endure posing for a snapshot taken by the clerk. Walking back home, he's nearly hit by her a second time, and takes a tumble into the ditch.

That would be a slapstick scene in another kind of movie, but writer-director Thomas McCarthy is aiming more deeply. Yes, this is a comedy, but it's also sad, and finally it's simply a story about trying to figure out what you love to do and then trying to figure out how to do it. Joe has that part mastered, since the coffee wagon represents a lifestyle so perfect that the only way to improve it would be if, say, a dwarf moved into the train station. Finbar thinks he has life mastered -- he thinks all he wants to do is sit in his train station and think about trains -- but perhaps there are possibilities of friendship and sex that he has not considered.

Finbar is a handsome man, which does not escape the attention of a local librarian named Emily (Michelle Williams). But she wants him not for his mind, or his trains, but for his body, and he is not interested in satisfying that kind of curiosity. Olivia is a more complex case, since perhaps she sees in the little man her lost child, or perhaps that is only the avenue into what she really sees. It is a great relief in any event that "The Station Agent" is not one of those movies in which the problem is that the characters have not slept with each other and the solution is that they do. It's more about the enormous unrealized fears and angers that throb beneath the surfaces of their lives; Finbar and Olivia could explode in one way or another at any moment, and the hyperactive Joe is capable of anything.

The movie's island of sanity is Cleo (Raven Goodwin), who you may remember as the young adopted girl in "Lovely and Amazing." Goodwin, like Dinklage, has a particular and unshakable presence on the screen, and I hope the movies do not misplace her, as they do so many child actors. As she regards Finbar and asks him if he is a midget ("No. A dwarf"), we realize that Finbar hates such questions, but is happy to answer hers, because he understands that Cleo is simply gathering information.

There was a documentary on cable the other night about little people, describing their lives in their own words, and its subtext seemed to be: Yes, I'm short. Get over it. I remember my face burning with shame early one morning when I was 6 years old and went with my father to where the circus was setting up. I gawked through a flap in the dining tent at the circus giant, and he scowled and said, "Can't you find anything else to stare at?" and I learned something that I never had to be taught again.

"The Station Agent" makes it clear that too many people make it all the way to adulthood without manners enough to look at a little person without making a comment. It isn't necessarily a rude comment -- it's that any comment at all is rude. In a way, the whole movie builds up to a scene in a bar. A scene that makes it clear why Finbar does not enjoy going to bars. The bar contains a fair number of people so witless and cruel that they must point and laugh, as if Finbar has somehow chosen his height in order to invite their moronic behavior. Finally he climbs up on a table and shouts, "Here I am! Take a look!" And that is the moment you realize there is no good reason why Peter Dinklage could not play Braveheart. 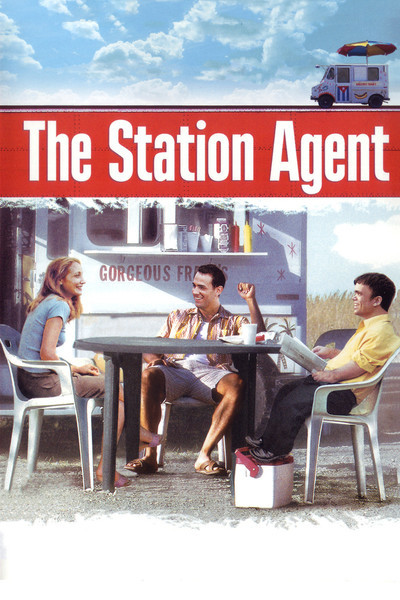