To attempt to describe too much of Nicolas Winding Refn’s “The Neon Demon” feels futile. It is a sensory experience, driven by the passion of its fearless filmmaker and a stunning central performance by Elle Fanning. She plays Jesse, the latest beautiful teenager trying to break into the fashion world, where she finds, well, you should really just see for yourself. The co-writer/director, who also made “Drive” and “Only God Forgives,” and the star sat down with us this week in Chicago to talk about the divisive response to the film, the purpose of art, and even “Beyond the Valley of the Dolls.” I found it interesting that the provocateur director immediately wanted to know what I thought of the film, opening a discussion about reactions to it before I could even get my recorder going. He’s a filmmaker who wants a response, and he certainly got that at the world premiere at the Cannes Film Festival last month.

What was it like seeing the movie at Cannes?

IN UNISON: Amazing. [They laugh]

You watched it, I assume?

NICOLAS WINDING REFN: You have to sit through it at Cannes. They make you. They don’t let you walk away. There’s no back door.

ELLE FANNING: You’re like in the middle. On display.

NWR: If you walk, everyone will see you walk.

Are there nerves? Or do you go in confident?

Yeah, I want the honest answer.

NWR: We go in complete confidence because we knew we were the future.

And then the response is divisive and you seem to enjoy that too.

NWR: Well, isn’t that the essence of creativity? You don’t get far by being nice.

I’m paraphrasing, but you’ve implied that you would have considered it a failure if everybody liked it.

NWR: Oh, absolutely. I think failure is in if it’s just “nice.” I certainly believe that creativity must be an experience. If I’m to steal time away from people, we should give them something to react to. That’s half of what we do our daily lives—we react to our surroundings. Of course, we have to make it entertaining, and we are entertainers. In the end, we’re just showmen. But, I think that it’s an important factor. Not to be anything else but clear about that—for me, creativity is an important part of our evolution. Art has probably done more good for the world than war. But they’re equally powerful. They both create revolutions. Where war destroys, art inspires. And in order to inspire, you need to penetrate the brain. In order to penetrate the brain, you need something to react to. To have something to react to, you need to get your emotions up and running. To get your emotions up and running, you need to have something that … whatever direction you go in, it has to be a movement between you and the experience. 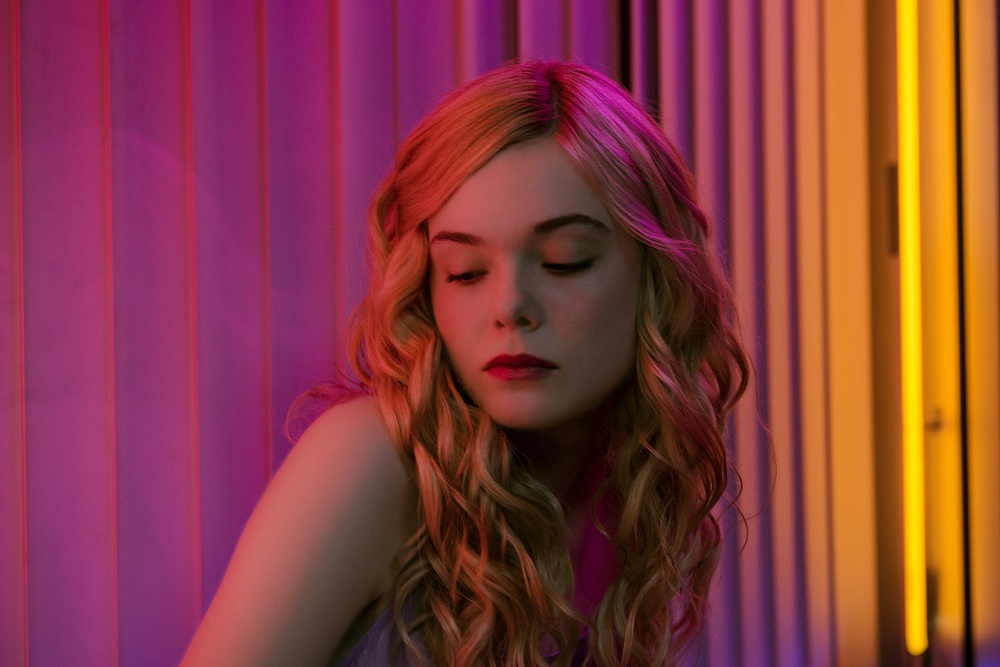 NWR: By being truthful in its creation. Nowadays, teenagers are so fast and quick to see through any form of manipulation. Sitting down and just thinking of something is like watching really bad pornography. There has to be some higher meaning to it. That’s what people react to. Nowadays, with all of the stuff we have going on in our world, if it’s not truthful then there is no reaction. That’s the good thing.

It requires a lot of trust on both your parts. How do you trust him that it won’t be hollow and shock for shock’s sake?

EF: I was always a fan of Nic. With his movie, you know it’s “A Nic Refn Movie.” I think as an artist that’s the best thing you can have—a personal stamp on something. I always respected that and wanted to be a part of his world, but knew he would never make a movie that has a teenage girl as a lead. Obviously not. Then I heard he was and it was in the fashion world. What? Just combining what we think of [with Refn]—masculinity and violence—in his films with that world was so interesting to me.

I hadn’t read the script and didn’t know the story at all and he asked to meet me, which is another psychic power that we had. I met him in L.A., and right from then we talked about the story. I read the script. What it actually meant. Right away, we talked about trust. The way he films his movies—in chronological order—and you’re constantly discovering things and because something happened yesterday we can’t do this anymore. We have to change it. You’re on this ride together. I felt like I had given so much personal … we would talk about it so much that it was like a baby to me. It was like a team together. We were trusting each other. We were going and pushing. So I never wavered. I never did. Each thing that we’d change it would be like, “Yes! It had to be that way.” The character was speaking through me or the story was speaking through him, and it just felt right. And when things got too normal, it wasn’t right.

NWR: When it became too much not of itself, you can steer it. It really started with a question that started our relationship. When we met, my agenda was “Get Elle Fanning.” I believe Elle’s was “Get the role.” But we didn’t know that.

NWR: It was like playing poker. There was no one else from my side who could play the role. It’s not like there were even options. It was get her or there would be no movie.

You created it and wrote it for her?

NWR: Mentally, as it went along, it became … as I was writing it, I had this invincible character that would have to be someone. But once you get down to reality, there’s no one to play her and there’s no movie. It would be ridiculous. The character requires so many elements. The only one who could fulfill that was this one person: Elle Fanning. So, get Elle Fanning. But I think that now … Elle just said something interesting that made me think of this … what started the process? We didn’t know each other when we met. Elle had not read the script. She didn’t know what she wanted to do. I was still trying to figure out what the essence of the film was. In order to avoid any shock for the sake of shock, we had to come up with what was the basis of the film. So, very quickly, I remember this in our “hello, how are you” awkwardness, I asked her, “Do you think you’re beautiful?” And Elle replied, “Yes.” And that was like an ignition. The movie has now begun, even though we hadn’t agreed to do the film together. The movie has now started. A year-and-a-half of prep had kind of been wiped out because now the film was going to be created. It was started on a very frank conversation. “Do you think you’re beautiful?” And her complete, honest-to-God answer was … "Yes." That, to me, was so refreshing. Then I was like, “I’m making a movie.” She’s going to guide this movie in a way that I could never imagine. I can do my part of the storytelling. I can carry it. I can paint it. I can maneuver it. I can massage it. But if I don’t have anything to work with, then there’s nothing. It became like a mutation between us. It became this experience.

Are you always that collaborative?

NWR: Yeah. I’ve done it in all my movies, and I think it’s part of what I enjoy about the process. This kind of intimacy that you create. Because it becomes very intimate. 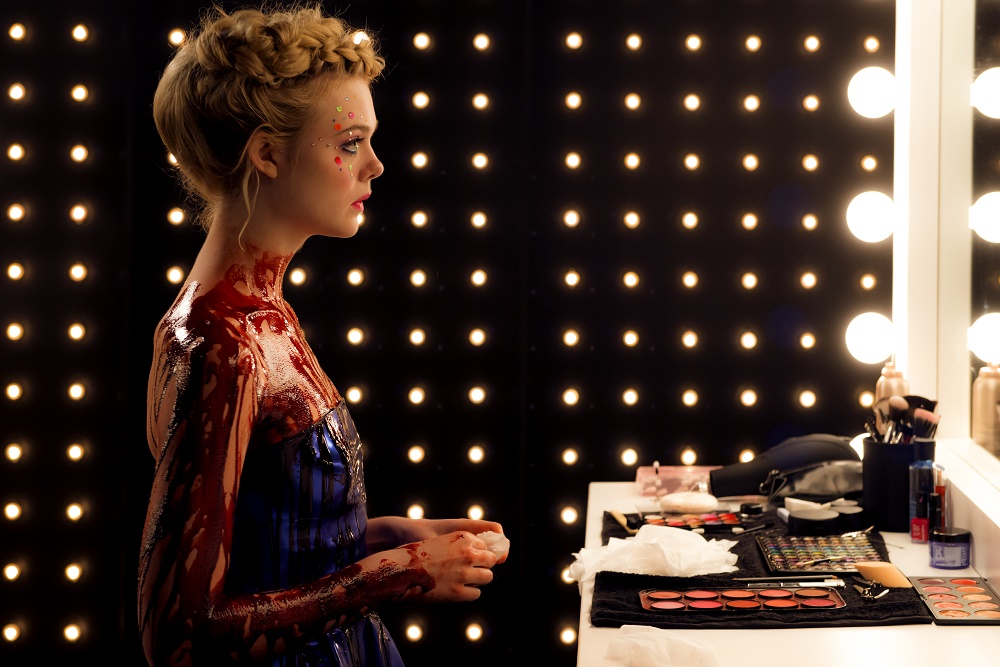 Does what the film is “about” change? When you first met with Elle, was it a different film in your mind?

NWR: No. The themes were always there. Very clear.

What would you say those are?

NWR: It’s a horror film about beauty. It also happens to be a melodramatic, camp, funny, colorful, suspenseful, existential, vulgar, with a little bit of science fiction.

This is a very strange meeting because the one script that I always thought of while making the movie was “Beyond the Valley of the Dolls.” I even showed it to Elle. I said “This is the only movie I can think of that combines everything into this experience." The journey was how do we touch upon all these themes? How does it continue to grow? Evolve? And we could only do that by shooting in chronological order.

And not really knowing the end.

NWR: The end never changed, meaning that how it ended was always the same thing. It was more of a practicality of how to tie up …

NWR: Not her. That was clear. But, halfway through the movie, the Jesse character becomes less of the protagonist and more of “the enigmatic.” She becomes everyone else’s perception of her. It was how to round off all the other remaining characters. What happened was, in the first week of shooting, everything was going great, and a lot of the big opening scenes were between Elle and Jena Malone. Then Jena Malone had to do the big necrophilia scene, which was the only scene that I shot out of order because it was shot at Hollywood Cemetery and I couldn’t afford to go back. Jena Malone’s scene with necrophilia became such an experience that I was like … I had found the protagonist, but the antagonist was never really clear for me, even on script, even on prep, not even until we shot that scene with Jena Malone. Now, I know who the real antagonist is, and now the second half needs to change in order to fulfill that prophecy.

Amazon is releasing this and I’m curious about your thoughts on them and what they’re doing to film.

NWR: For me, Amazon has stepped in and presented the future of entertainment. Obviously, the future of entertainment is going to be on the internet. So, Amazon, being a provider—not just on the playing field—is, of course, opening up a whole new set of possibilities. At the same time, Amazon also understands platforms. For them, theatrical is an extremely important event. I also believe it’s the best way of seeing a movie. It’s certainly not the only way to see a movie. Theatrical is still part of an old eco-system of film. The problem is just the longevity is continuing to shrink. The digital revolution is forever. They put importance on that option as well. With Amazon, you’re getting the best of both worlds, with a whole new playing field.

And a lot of creative freedom.

NWR: They came in and bought the finished film but we’re already talking about the future. I’ve been very, very lucky.