A Family's Mosaic: Joachim Trier on "Louder Than Bombs"

If you've seen Joachim Trier's "Oslo, August 31st," then you know that one of its most gripping scenes involves its protagonist sitting in a cafe. As a former drug addict just out of rehab, Anders Danielsen Lie's character Anders is reentering into society, but his placement in this scene is more a gateway to other lives. Around him, we see long fragments of various conversations (extras with dialogue beyond the usual "walla" filler); the camera's attention is unpredictable, but always deeply interested. When a woman runs by the shop, the editing follows her, down the street, into the gym, the milk section of the grocery store, and back home. These details are inconsequential to plot, yet speak to some greater picture about the world of Anders and his subsequent connection and disconnection to everyone else.

It's this type of detail and existential interest that informs, in droves, the experience of "Louder Than Bombs," a gripping portrayal of real emotion by co-writer/director Joachim Trier. The focus is a story of grief—a mother and wife played by Isabelle Huppert who died tragically three years before the film's events—expressed in a family drama more akin to something like 1980's "Ordinary People" than any modern domestic indie drama. Trier rightfully describes the film as a "mosaic" into the family's life, as it places us in the differing head spaces of the two brothers (the younger, extremely introverted Conrad, played by Devin Druid; the older by Jesse Eisenberg) and their father (played by Gabriel Byrne), creating a variegated, massive image of their isolating grief.

Trier has directed two films previously, 2006's "Reprise" and 2011's "Oslo, August 31st," all co-written with Eskil Vogt. The latter title was a pick for Ebertfest in 2013 (an occasion that Trier says he remembers with great pleasure). "Louder Than Bombs" marks his English-language debut, and is his biggest production yet.

RogerEbert.com spoke with Trier about his "Louder Than Bombs," not approaching his stories with all of the answers, the John Hughes movie he describes as "mini-Bergman," and more.

Why was this the story you wanted to tell for an English language debut?

I was interested in exploring—with a sense of the character driven, almost intimate kind of filmmaking like I’d explored in “Oslo, August 31st"—this very subjective, intimate way of using the mise-en-scene and the film language, to do that in the same family and look at the discrepancies or the differences between different characters. To explore those little gaps that we have in our lives, even in the closest of relationships; those unspoken moments that are difficult to bridge in a family. I think it came out of a curiosity about making a film which is a, I would say a “mosaic,” rather than watching one character’s story. This idea of looking at family as a construction, almost.

Does that strike you as more true to an overall emotional experience, this mosaic idea?

Well, I think that I always try to explore and show something that I hope will be insightful, but I don’t always feel that I have all the answers when I start out to make a movie, you know? I’m exploring, I’m looking at the moments taken from life or imagination. But I found that with this story it was fun to look at the different generations of men. In the way, it’s also a love story of three different generations, or three ages of men, trying to find women in their life when they have this big absence of a mother at play in their family history. 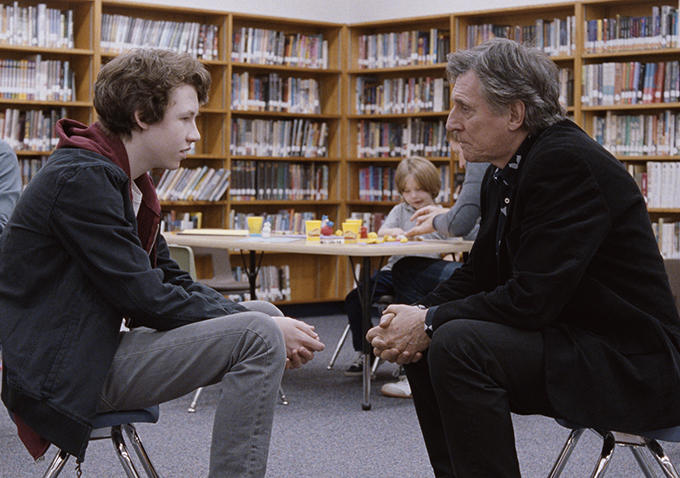 When this film was coming together, was it always imagined as an American project?

It was, actually. It came about after my first film, “Reprise,” and me and my co-writer Eskil Vogt, were sitting down and thinking ... we got a lot of offers to do films in America for different studios. But since I went to film school in London and spent several years there, it was kind of the natural thing to try to do something in the English language, and also work with a bigger cast of these great American and international actors. That’s how it came about, but I hope the story is more universal in a way. We’ve had great responses in Europe where it has been released already, so I hope this [film] speaks beyond a national context.

I grew up with quite nuanced but also not-so-nuanced movies about American adolescence. A good example [of films] that I think are remarkable are John Hughes movies. I thought that “The Breakfast Club” felt like a mini-Bergman set in a high school—real great, character-driven storytelling there, in the best of American traditions. But I think it’s important also to explore the reality. I went to some high schools and spent some time there, and discovered that there seems to be still be a dynamic of separations and layers, like different groups. I wouldn’t say I’m an expert, but I wanted to have a look at that.

One movie that came to mind while watching your film was Robert Redford's "Ordinary People," especially with a traumatized young man being named Conrad. Was that an influence?

Yes. And that’s a great example of what I feel is the type of American cinema that I grew up loving. That character-driven, well-performed filmmaking that felt relevant to real life. You could mirror your own life in it. And it’s about life stages. I think we saw a lot of that in the past, but at the moment there it's not often that you see a movie with a proper budget like this ["Louder Than Bombs"], that actually gets to talk about more serious subject matters like grief or parent-child relationships, the experience of existential questions. So, I feel very honored to be allowed to just be inspired by that great tradition.

There’s a nice balance of what seems more real. Downplaying big moments, but also not losing the story to any overly serious tone.

I’m always worried when you’re dealing with big emotions that you get sentimental, and therefore kind of kill the possibility to have a broader perspective on things, or a more suggestive experience from the audience, who want to be allowed into the film, rather than to be told what to feel all of the time. It’s a very emotional film obviously because it’s dealing with these sort of close-to-the-skin subject matters, but at the same time I wanted there to be space for interpretation and wonder and curiosity. I think it’s impossible when you make something about human beings to avoid humor. People are funny whether they like it or not—even in the midst of something serious there’s always a laugh in real life. But it’s trying to not use laughter to shy away from the scenes, because they need to be taken seriously. And it’s important to emphasize for the readers that haven’t seen this film is that this isn’t an immediate grief drama about the moment when a mother dies, which I would obviously avoid because that’s so saturated with a specific set of emotions. This is really three years later, and life has seemingly moved on, and then these things echo through regardless. 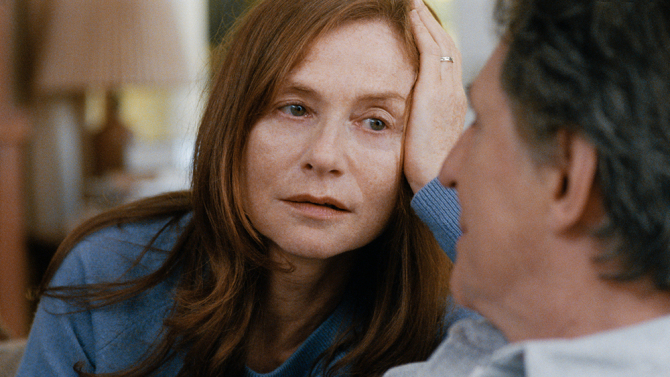 If you were to have made that other type of movie you speak of, that would have been a huge stunt to pull off. It also feels more natural to have this three years later, and to see the current state of it.

I feel that, and I feel that since the film is not about this grieving, it’s more about how we affect each other knowingly and unknowingly in a family, and how. For example, in the family, we see how the brothers have two very different perceptions of the same mother, and I find that in real life, if you talk to siblings about their parents, they might have very subjective or different experiences of the same parents.

Were you actively conscious about not losing the family, especially the brothers, to a simple depiction of dysfunction?

I try to make full three-dimensional characters. And the idea that children ... there’s a need for separation to become a grownup, an autonomous individual. That’s always a tricky process. I know no one that I’ve ever met that hasn’t had in some stage in their life, a little bit of a difficult time as how to separate and find your own life away from your parents, kind of like this liberal and willing people, there’s no authoritarian father here, it’s the rather loving and wonderful Gabriel Byrne, and at the same time it’s not easy because how much of a space can a 15-year-old demand to have around him, how do we deal with him?

You know, we’re dealing with a modern character with this gamer kid, and we see millions and millions of people like this. And there can be this worry in our culture that’s like, “What’s wrong with him? Will he be isolated, or non-communicative? Will it lead to something devastating or terrible?” Yet, we need to look at these kids and respect that it’s a new language, and probably also a new need for their own space. It was interesting because both in Norway and the US, these kids probably know each other when they play at night with a kid from New Zealand, so there’s this ongoing subculture which is not about playing loud guitar to make dad angry, but being in your own world, almost. So, I’m curious as to what’s going on with modern family dynamics.

Have you been studying other presentations of modern families in TV shows or movies? Was there anything that you wanted to correct with this film?

Not anything that I wanted to correct. Usually I just come up with stuff that I find interesting rather than working in opposition to something. But, it was inspiring to see Gabriel Byrne in “In Treatment,” and it showed me what a wonderful actor he is, and how interesting it can be to look at people go through their emotions, not necessarily yelling or screaming, but the stuff they are avoiding.

When you're on set, how do you stay outside of your head, especially with films that are so existential?

I love shooting. I’m fortunate like that, that the actual shooting process is maybe my favorite part of the whole moviemaking process. I think the actors time and time save me, in a way. They bring my focus to the moment. I shoot on 35mm, I’m a bit of an old-fashioned filmmaker, so when the actual camera is rolling and the actors are ready, it’s almost like a holy moment when you say action. And you don’t want to make it precious in a non-constructive way, it needs to be loose and free and explorative and I allow for mistakes. They need to try things and do the wrong things and the right things. But having said all of that, there’s this focus of presence. The least likely moment to look at a cell phone is when a cast is on and a 35mm camera is rolling and an actor is doing their thing. That’s the moment when you’re farthest ways from the everyday banalities. That to me is the great reason why I do what I do, to be allowed me to focus in on an actor during takes.