The sounds of Cannes usually begin for me before daylight, when I'm awakened around 5:00 am by the noise of the big motorized awning of the bistro that's directly under my window being rolled down for the day. That's quickly followed by the watery roaring of the street-cleaning machine as it drives up and down the little plaza where the bistro sets up its outdoor tables and chairs. Then, comes the metallic scrape of dozens of chairs being dragged into place. Finally, some natural sounds: birds, including the big screeching gulls that fly inland from the waterfront a few blocks away. The alarm goes off and it's time to start another festival day by arriving at the Palais at 8:00 am to get a seat for the 8:30 am press screening. 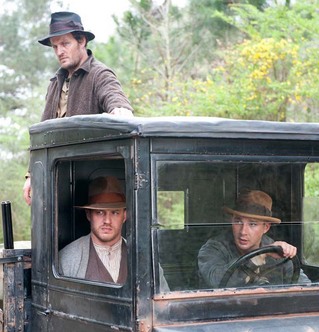 "Lawless" by John Hillcoat, the first of four American films in the year's competition, premiered this morning. Set in Franklin, Virginia, in 1931, this is a Prohibition-era tale of a real family, the Bonderants, who became local legends as notorious moonshiners. Legend is the operative word here, as this is a highly romanticized story of three macho brothers and their apparent talent for besting the law, the competition, or death, as the case may be. This is film in which the good guys can be beaten to a pulp and be OK the next day, or take a shotgun blast to the gut from fore to aft but still get up and walk.

The cast is easy on the eyes: Tom Hardy as the eldest brother Forrest, who, as reputation has it, cannot be killed; Jason Clarke as Howard, the fearless middle brother who's batshit crazy when he's been consuming the product; and Shia Lebeouf as the youngest brother Jack, an aspiring lady's man who still has a lot to learn about the family business. Love interests include Jessica Chastain as a former fan-dancer from Chicago who shows up at the Bonderant enclave seeking the quiet life (!), and Mia Wasikowska as the sheltered daughter of a fundamentalist preacher. 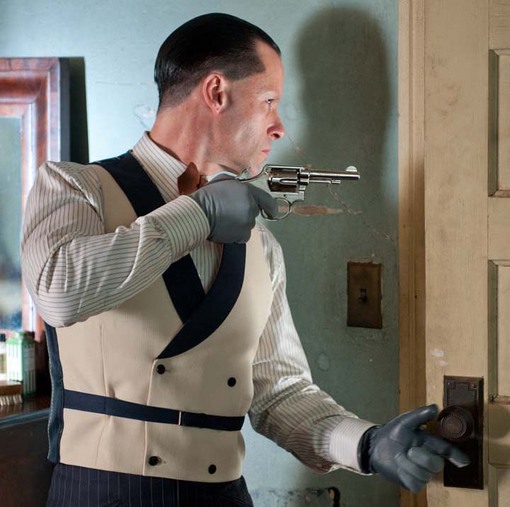 For the most part it's an engaging story, although most of the bootleggers-vs. -corrupt-agents-of-the-law action is standard stuff that's been worked over in every possible combination in decades-worth of other movies. The primary villain is Special Deputy Charley Rakes (Guy Pearce in a grotesque characterization), who appears to be presented as gay by means of all the usual movie clichés. He's a sadistic but prissy dandy who wears white kid gloves and perfume to do his dirty work, and is referred to as "a nance" by other characters. 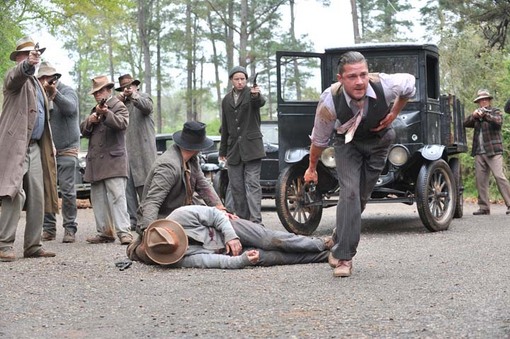 Some meticulous research clearly went into the period settings and costumes for "Lawless," and that aspect is a pleasure in itself. Bluegrass tunes and a range of other pop music (including a hillbilly rendition of the Velvet Underground song "White Light/White Heat") is a driving force in the progression of the narrative; a little too driving for my taste. By the second half of the film, nearly every major scene was matched to a song, hence a moonshine still being blown up is accompanied by "fire in the sky" lyrics, and so on.

In all, "Lawless" is pleasant enough viewing but it doesn't carry any bite. The film slides into a very conventional ending after the last big shootout. In my eyes, this turn of the plot essentially trivializes everything that went before, leaving only a faint memory. 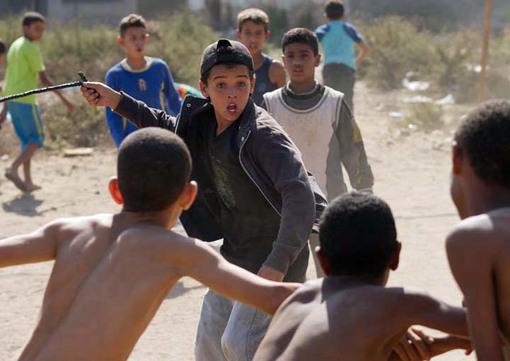 "Horses of God" by Nabil Ayouch was up next, and outlaws of a very different sort were the focus of this Moroccan film about the making of suicide bombers. Three boys are growing up in a shanty-town adjacent to Casablanca's massive garbage dump: Hamid, a born leader; his bullied younger brother Yeshine; and their friend Nabil. Jump ahead a few years and Hamid is in prison for assaulting a cop, and Yeshine and Nabil eke out a living working for the repellent owner of a small auto repair shop. 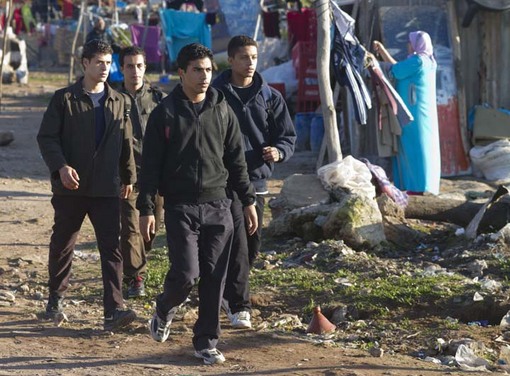 Hamid's return from prison as a newly-converted Islamic extremist is the turning point of the story. He's glassy-eyed with fervor, and separates himself from his family to live with his religious associates at the mosque. The two younger men reject the whole scene until the night they commit a crime and panic, needing the help of Hamid and his friends. 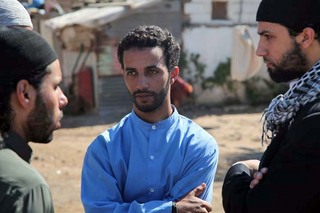 Director Ayouch based the film on a fictionalized account of actual bombings that took place in Casablanca in 2003. Where the plot is going is never in doubt. The process that starts with economic deprivation and finishes with recruitment and seduction into a twisted dream of empowerment is really the story. Ayouch depicts the lives of the families who live in the slum with extreme realism (I don't think that garbage dump is a set). "Horses of God" makes it clear why the lure of making one's life worth something, if only in heaven, is such a strong one for the young men he portrays.

I've been a fan of David Cronenberg's films since the earliest features, so I certainly was curious to see what direction his son Brandon's first feature would take. Cronenberg Sr. has "Cosmopolis" coming up in competition in a few days. Brandon Cronenberg's "Antiviral" debuted today in the "A Certain Regard" section of the festival. 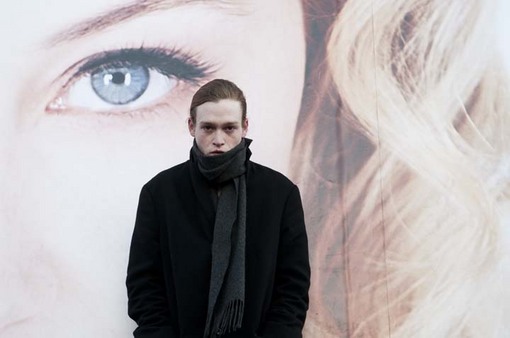 Talk about a chip off the old block, Croneberg Jr. is certainly trying his best to stake out that territory, but maybe he should give it some additional thought. "Antiviral" takes up where his dad's work left off circa the late 1970s, with films including "Shivers," "Rabid," and "The Brood," except for one thing--it's nowhere near as good. In fact, it's pretty bad.

The concept of "Antiviral" is ripe for exploitation. In this story, a post-Botox science fiction, the cult of celebrity worship has so dominated society that there is an exclusive clinic that sells viruses of the ailments of celebrities. For a price, you can be injected with the same strain of herpes as your favorite star, or catch the flu your idol experienced at a particular juncture at his or her career. The viruses are altered so they can't be communicated beyond the injectee, not for the protection of others, mind you, but to protect the clinic's copyright. You can even have your dog infected with the ringworm of a celebrity pooch. 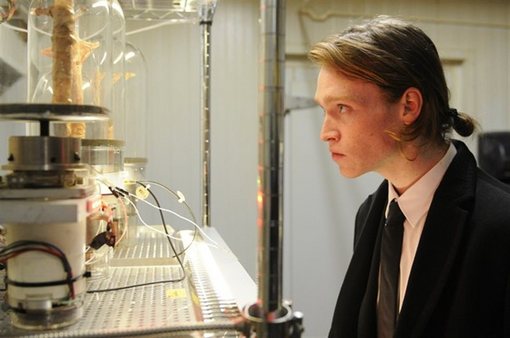 It gets weirder. Genetic research has advanced so far that it's possible to grow steaks from celebrity cells. It looks like slabs of raw halibut, and is sold in special butcher shops where the trays of product are labeled with the name of the source. It's so popular that customers fight over it.

The central narrative involves Syd March, a young employee of the Lucas Clinic. He's stealing from his employer and bootlegging celebrity viruses on the side. The most popular are sourced from the beautiful blonde star Hanna Geist. Somehow a virus mutates or has been deliberately genetically altered, and both March and Geist are hosting a killer strain. With all this outrageous material, how could Brandon Cronenberg go wrong? Well, for one thing, it's just not weird enough in the execution. 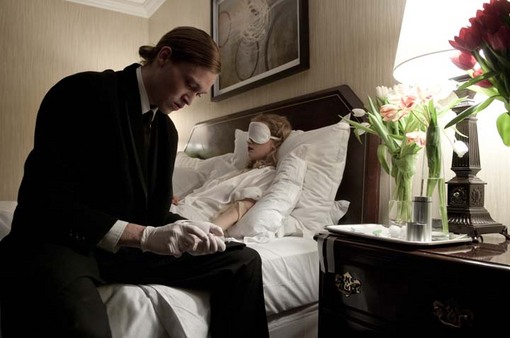 Cronenberg Jr. is strong on visual style, but weak in creating the real creepiness that gets under your skin. "Antiviral" is desiccated and airless. For all its exploitable qualities, the plot is going through the motions. An over-reliance on close-ups of hypodermic needles piercing skin, blood being drawn, and other medical procedures is a cheap grab for audience reaction, but there's nothing of substance behind it. In a film like this, the horror should come from a concept too insidious to shake after the film is over, kind of like one of those celebrity viruses. 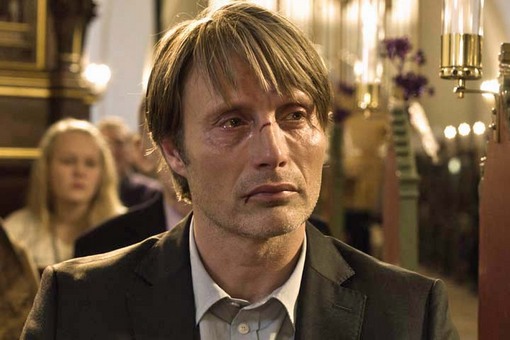 My last film of the day, Thomas Vinterberg's "The Hunt," screening in competition, was also the best of the day for me. Oddly enough, there is a thematic tie-in of sorts with "Antivirus," since Vinterberg states that he began the film with the idea that "thought is a virus." It's the story of a kindergarten teacher who is falsely accused of exposing himself to a little girl in his class who also happens to be the daughter of his best friend from childhood. 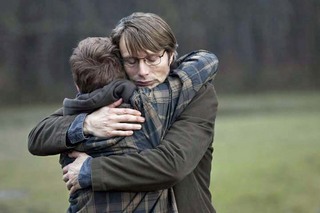 Mikkelsen is a powerful actor especially known for tough guy roles. He's brought something unique to every film, whether it's Nicholas Winding Refn's "Pusher" trilogy, Suzanne Bier's Oscar-nominated "After the Wedding," or Refn's hybrid Viking misfire "Valhalla Rising." In "The Hunt" he plays against type as Lucas, a modest, mild-mannered but fun-loving divorced teacher and father of a teenage son. He's well-liked in his community, has loads of friends, including a core group of male buddies, and is positively adored by his kindergarten students.

Vinterberg came to worldwide attention by co-authoring the Dogme 95 manifesto along with the notorious Lars von Trier, and by winning the Special Jury Prize at Cannes with his 1998 Dogme film "The Celebration." That film proved him to be a masterful director of actors, especially in groups. He manages to simultaneously convey the individualism of his characters and the shifting tones of group dynamic in a way that is both realistic and dramatically impactful.

A good example early in "The Hunt," has Lucas sitting around a table drinking with his friends at an increasingly raucous boys' night out. He receives a phone call from a woman and steps away to talk with her. Returning shy and flustered, he's the object of ribald ribbing by the group. The scene borders on buffoonery and yet the counterpoint of Lucas's good-humored reserve holds it all together. 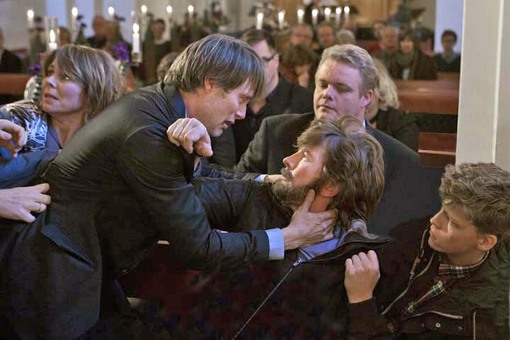 Once the accusation is made against Lucas, official procedures are put in motion but the gossip machine of the community takes over. He's quickly fired from his job, his ex-wife won't allow him to see his son, his friends reject him, he's banned from local stores, and even assaulted in one of them when he attempts to buy pork chops. His attempts to fight back simply by continuing to be the good man that he is appear to be futile in the face of the thought that has infected every interaction in his life.

"The Hunt" is not a facile film. Each escalation of the disaster that hits Lucas's life has complex roots that reach into many relationships and many households in the town. The virus analogy is very much borne out in every aspect of this plot, and unlike Brandon Cronenberg, Vinterberg is able to drive home his point that once it's in the bloodstream it never goes away.