Right at this moment, "The Canyons" is screening for the Venice press. And yet it doesn't feel like Paul Schrader's latest effort is really here. It seems to evade its own physical representation like a ghost leaving its body behind. It simultaneously belongs to the past—because it's been out for a while many had already seen it, including me—and to a foggy, perennial tomorrow, slave to the extra-filmic cloud of curiosity and gossip that keeps blurring it out of sight. It's over, and it's coming. Forgotten and highly anticipated. I wonder what Schrader thinks of such an eerie atmosphere that so well matches the mood of his film. 'When was the last time you actually went to a movie?' Premieres don't count.

Let's get back, then, to examples of more corporeal cinema. "Tracks," by John Curran, is chiefly concerned with the state of Mia Wasikowska's health during her six-months journey across the Australian desert. The story is adapted from Robyn Davidson's account of her 1977 attempt to reach the Indian Ocean with four camels, a dog and a National Geographic sponsorship to support her. You can hardly fault the execution: Wasikowska does wonders here, back in her native Australia and working her way through every nuance of her vulnerable stubbornness. Curran's direction and technical contributions make the most of the natural beauty on display, but that, in a way, is part of the problem. Just like "Into The Wild" and other stories of amazing journeys of endurance, "Tracks" has only one dimension. You can admire these people or you can question their motives, but it's extremely difficult for the movie not to be enthralled by the individuals. These films run parallel to their protagonists, never crossing their paths often enough to shake things up. 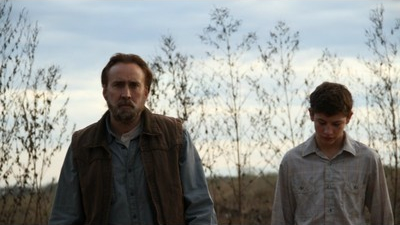 David Gordon Green certainly knows a lot about shaking things up. The ease with which he's gone from his indie roots ("Undertow", "Snow Angels") to a triptych of studio comedies ("Pineapple Express", "Your Highness," "The Sitter") is second only to his skillful integration of the two modes now that he's back to more personal material. Granted, "Prince Avalanche"—which earned him a Silver Bear for Best Direction a few months ago in Berlin—and "Joe"—in Competition here at the Lido—are unlikely siblings, but they feel very much of a piece. A central relationship between two men on the outskirts of society functions as a template for bitter-sweet existentialism ("Prince Avalanche") and a rugged, hopeless fatalism in the case of "Joe." Played by a bearded, pensive Nicolas Cage, the titular character is the film's best creation, single-handedly elevating it from its basic quasi-western roots. In addition to being your familiar loner with plenty of demons to battle, Joe is also capable of warmth, reason and heartbreaking altruism. A character with so much on his plate is already fairly interesting, and—with Cage flipping the switches—he is guaranteed to come with some added flavor. With everything that's been said and written about the Cage of the last decade, even pointing out how good an actor he can really be is now part of the same cliché. Somehow, Joe is really the best answer to all that—not because it's against type, but rather because it's a synthesis of his many types.
Advertisement

Tye Sheridan enters the picture as an eager and smart young man named Gary, determined to save his mother and sister from an abusive father by working his way up in Joe's business—which consists of injecting poison into the trees so that they can be legally cut down. Gary and Joe, much like Alvin and Lance in "Prince Avalanche", establish a shape-shifting relationship that touches on mentorship, professional interest, conflict and intangible affinity. Furthermore, Sheridan's work has much in common with his character in Jeff Nichols's "Mud", and this enclosed, nasty rural universe in which people seem doomed to destroy each other is not dissimilar from, among others, David M. Rosenthal's upcoming "A Single Shot." In short, we've seen this before. What we haven't seen, though, is a protagonist who seems to fight against a whole genre, determined to do good as much as he's resigned to do bad.