The 3,000 or viewers who jam into each official screening in the huge Grande Théâtre Lumière and the equally huge Salle Debussy each day comprise a kind of United Nations of delegates from the world's film industries. We can become as scruffy as new arrivals at Ellis Island as the festival winds down, and as pushy as people can be whose status of the moment comes down to a single seat.

The seats in the Palais theaters are so plush and comfy that you could easily settle in and go to sleep if you're so inclined, but the amount of leg room would make the average airline coach cabin feel overly generous. As a theater fills up before a screening, the rows start to seem like clown cars — just how many more people can crawl over me to fit into this row, I think? And then, there are the straight-backed fold-down jump-seats in the aisles for the overflow. The French word for these is strapontit. Some of us get a kick out referring to them as the dirty-sounding Le Strap-on.

Ellis Island is the focus of James Gray's period drama "The Immigrant," which premiered in competition this morning. Starring Oscar-winner Marion Cotillard ("La Vie en Rose"), Joaquin Phoenix, and Jeremy Brenner, the circumstances and setting of the story were exhaustively researched by Gray, from material including photographs and stories from his own Russian Jewish immigrant family.

That said, although the production design of the film is extraordinary, it doesn't have the feeling of a very personal work. It's the first fiction feature to actually use Ellis Island as a set, and the film's other authentic interiors have the amber glow of gaslight. But the ethnic cohesiveness and rivalries of New York immigrant neighborhoods in the 1920s, which Gray discusses so articulately in the press notes, appear on the screen as something more homogenized and mainstream in the treatment.

Beautiful, English-speaking Ewa Cybulski (Cotillard) arrives at Ellis Island with her sister Magda (Angela Sarafyan) in 1921. Her sister is immediately diagnosed with tuberculosis and taken away. The aunt and uncle she was expecting to meet don't show up, and authorities claim that Ewa has a record as a morals risk, meaning that she is slated for immediate deportation. 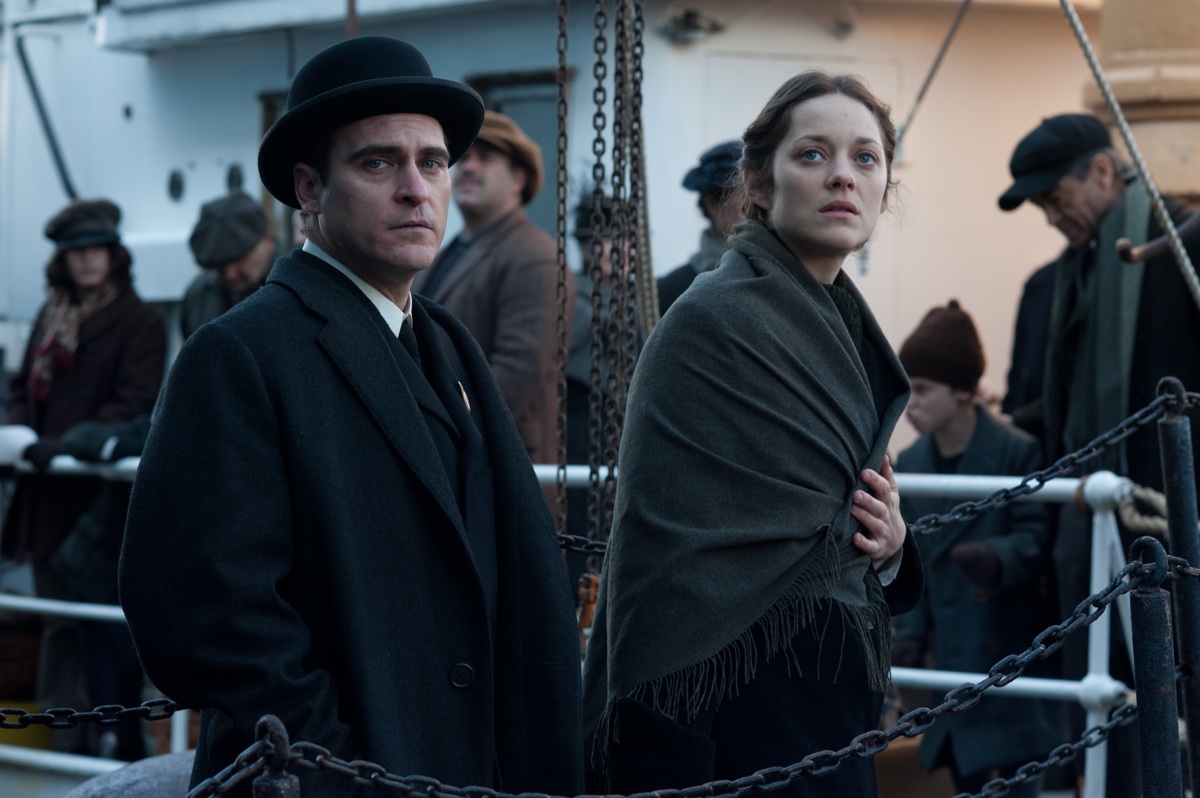 Bruno (Phoenix), an ambiguously helpful man who knows how to pull strings, comes to her rescue, and Ewa is soon warily but gratefully installed in a tenement building where many other women seem to work for her benefactor. Cotillard is appropriately innocent and guileless in this role, and brings to it a refinement that is intended to make her an ongoing object of desire for both Bruno and his magician cousin Orlando (Brenner) despite the debasement she will suffer at Bruno's hands.

Ewa's one unshakeable goal is to earn the very large amount of cash that Bruno tells her will be necessary to free Magda from the Ellis Island hospital. She is given a part in the girly show at his speakeasy The Bandit's Roost, but he soon tricks her into prostitution by exploiting her guilt over her sister's plight. With steal spine in place, she accepts that she must do whatever it takes to earn money.

Phoenix's Bruno is gruff and unpleasant, and he doesn't seem like the personality who has the right qualities to wheedle women and keep them enslaved. By contrast, Brenner's Orlando seems too breezy and contemporary in his manner to be of the period of the film. A slight spark of camaraderie develops between Ewa and doomed Orlando, but the mystery is Ewa's growing affection for the man who has done nothing but use her. It may be the Stockholm Syndrome, or it may be the script's mixed messages.

Every now and then something really important happens at Cannes that goes way beyond the artistic tempest-in-a-teapot of director rivalries and symbolic awards. Something like that happened today with the world premiere of the Iranian film "Manuscripts Don't Burn" by Mohammad Rasoulof ("White Meadows," "Iron Island") in Un Certain Regard. No press notes were made available for this film, and the description in the festival catalogue consisted of two vague lines that made it sound like a thriller about two hit men. Not even the actors were named.

I was blown away by what I saw. It's about hit men alright — a fiction about torturer/killers who work for the secret service arm of the Iranian government. I can't even guess how "Manuscripts Don't Burn" got made under the radar of Iran's government oversight and censorship of the film industry.

I talked briefly with a friend in the film market who had some years ago represented one of Rasoulof's earlier films. She speculates that it was made entirely clandestinely, and that Rasoulof is unlikely to be able to return to Iran after the festival.

Cannes artistic director Thierry Frémaux brought Mohammad Rasoulof to the stage along with a few of his cast and crew prior to the screening. Speaking Persian, which was translated into French by an interpreter, and subsequently into English by Frémaux, the director apologized that many others who worked on "Manuscripts Don't Burn" couldn't attend the festival due to "the Iranian situation." He concluded his remarks with, "Forget the background of all that I'm saying; now it's just the film."

This is the first Iranian film that I know of in which the persecution and execution of artists and intellectuals from the time of the 1979 revolution to the present is acknowledged and portrayed. There have been books on this subject published outside of Iran, most notably, Houshang Asadi's harrowing award-winning memoir "Letters to My Torturer," which, in part, details sharing a prison cell with the man who went on to persecute journalists and writers himself, and is now Iran's supreme leader.

In "Manuscripts Don't Burn," the mission for two hit men, Morteza and Khosrow is to retrieve the three existing copies of a draft of a book by an elderly writer who has written a damning account of an attempt by the government to kill a busload of writers in transit to a conference by means of a rigged accident. The two thugs are directed by a secret service agent who had once been the cellmate of the poet who has hidden one of the manuscripts.

Changing regimes, shifting government agendas, and changing sides are all masterfully underlined with a story so low-key in its narration that the increasingly horrendous incidents and escalating violence against the writers being pursued is portrayed even-handedly as just another humdrum day's work by the hired killers.

There are religious implications as well. On the phone with his worried wife, Khosrow, who is portrayed as a working-class family man with a mortally ill child, retorts: "Everything I do I do to please God." Later, when he expresses some misgivings to his cohort about the pending job, Morteza answers, "We've been given the order and it complies with Sharia [law]."

In one of Rasoulof's scenes of darkest absurdity, Khosrow hauls the hog-tied poet, blindfolded by the jacket tied around his head, out of the trunk of his car for the kill in a lonely ravine. The victim has wet himself, and the thug scolds him angrily for soiling the floor mats of his trunk, yelling "You couldn't wait ten minutes?"

In a scene loaded with similar irony, Khosrow, in workmanlike fashion, has just flopped a wheelchair-bound writer across a table, pulled down his adult diaper and pushed a lethal suppository into his anus. While he calmly waits for the man to die, he wanders out to the kitchen, checks out the fridge, and makes himself a snack, putting a piece of fruit in his pocket for later.

Most films that screen here in Cannes don't have life-or-death implications for the people who make them. "Manuscripts Don't Burn" is something else altogether — a work that may impact the life and career of its maker for the rest of his life.

The experience of watching "Manuscripts Don't Burn" would have been a hard one to match in terms of emotional power, and Jim Jarmusch's "Only Lovers Left Alive," the second-to-last film screening n this year's competition, is a trivial exercise in hipster name-dropping by comparison. Jarmusch's status as a god of international indie filmmaking was cemented way back in 1984, with "Stranger Than Paradise," and his cult only increased with pothead favorites including "Dead Man" and "Ghost Dog: The Way of the Samurai." 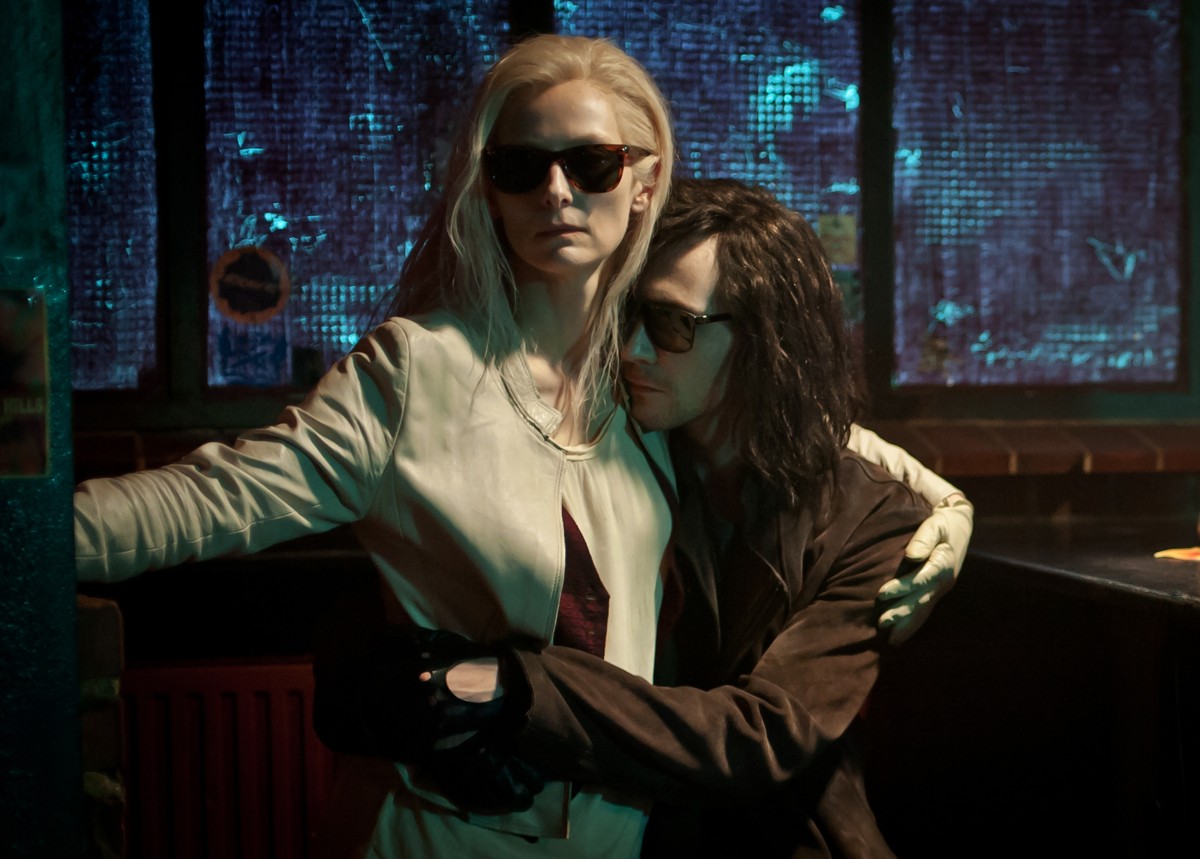 I admire some of Jarmusch's work, but I’ve never been a member of the cult. I can't even think where to start in trying to cut him some slack on "Only Lovers Left Alive," which is a priggish film full of in-group references that will provide a-ha moments for those in the know.

Adam (Tom Hiddleston) and Eve (cultiest of all actresses, Tilda Swinton) are a married couple living apart. She lives in Tangier and he lives in Detroit. They are vampires, by the way, who complain about the zombies wrecking the world; and dude, are they hip, well educated, and in-the-know. He collects vintage electric guitars, which are shown off lovingly while he narrates their brand histories in detail. He also collects vintage electronics: a Fifties TV, a Seventies phone, and much, much more, in his crumbling Victorian house.

Eve struts the streets of Tangier in high-fashion hijab, and collects mountains of books in every language, which she absorbs by passing her fingers over the pages. She visits with old teacher and former lover Kit (John Hurt), also a vampire, but decides to join Adam in Detroit. The film takes the same disintegration tour of the city already covered in all seriousness by more than one 2012 documentary including "Detropia." The vampire couple narrate by means of an expository conversation with each other, and point out the house where Jack White of the White Stripes grew up.

Since Adam and Eve are many centuries old, the patter of their home life includes references to old friends like Schubert, and authors Shelley and Byron. They play chess and eat blood popsicles: "O Negative," she says. It’s all very precious, very silly, and so very thoroughly obnoxious.