Motor City on the ropes

Via beautiful cinematography, the film wanders the city, contrasting a new automaker's towers with abandoned hotels, derelict theaters, ruined houses and people walking through the snow down the middle of streets because there's no traffic. Such shots are intercut with performances by the Michigan Opera Theatre, which clings to life with the support of the Big Three car companies.

The most striking figure is not the hapless Mayor Dave Bing, but a retired teacher named Tommy Stevens, who owns a blues bar named the Raven Lounge. He can no longer afford a cook, so he does the cooking himself ("I enjoy it. It's a hobby."). Stevens visits the auto show and notes that the electric car on display from China is $20,000 — half the price of the Chevy Volt (which, we learn, GM has since moved the make's manufacture to China).

We follow the last days of the local union at American Axle, as the members turn down a contract that would not allow a living wage, and the company closes. The film's co-directors, Heidi Ewing and Rachel Grady, observe that the inner city has seen a modest population growth because of young people taking advantage of bargain rents. We meet one such couple, who assemble a long table in an urban wasteland and sit at it while wearing golden steampunk gas masks. Their goofiness makes a contrast to the bleak cityscape behind them.

Throughout the film, there are glimpses of the golden days, of sleek new models and glamorous car ads. Stevens takes the camera on a long drive past where the main Cadillac plant once thrived. "We built everything," he said. "In the war, they switched over to bombers. Everything." He is driving past a barren landscape. 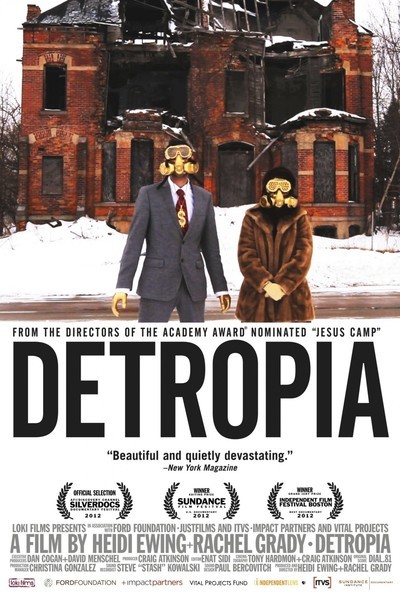