Terrence Malick's long-awaited "The Tree of Life" premiered in competition today, with an 8:30 am press screening. I anticipated seething crowds, so headed off to the Palais a little early. Entrance areas were jammed, and the Grand Theatre Lumiere was nearly full at only 7:55 am. A friend who had been holding a seat for me estimated that he had been about 200th in line when arriving at 7:30 am.

"The Tree of Life" was announced for last year's Cannes festival, but withdrawn when it wasn't completed in time. Although Malick has directed only four features in his more than 40-year career as writer/producer/director ("Badlands," "Days of Heaven," "The Thin Red Line," and "The New World"), his cult reputation is such that many here were itching to declare "The Tree of Life" a masterpiece before the first frame ever hit the screen.

I think at least a few hopes were dashed this morning. As the film reached its conclusion there was a fadeout that turned out to be a false ending. People immediately jumped to their feet to exit in the dark, as always happens here, and a few dozen loud boos erupted from points all over the theater. Another image came on and those leaving stopped in their tracks and fell silent until Malick's director credit appeared. Applause followed, along with an equal amount of booing. 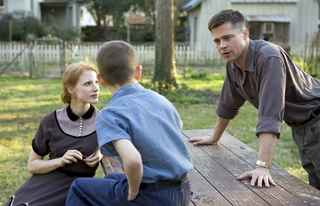 I have mixed reactions to Malick's body of work, so I try to take each film as it comes without being predisposed to love it or hate it."The Tree of Life" is gorgeous to look at, lyrical, mystical, conspicuously spiritual in its message, and appears to have autobiographical elements. It's also, in part, profoundly kitsch.

A text from the "Book of Job" is the first image on the screen, followed by a voiceover by Jessica Chastain, who plays the mother in the film: "There are two ways through life: the way of nature and the way of grace. You have to choose which one to follow."

There are two parallel stories. As Brad Pitt described them at the press conference, they are the "micro" story of a family in a small town in Texas in the 1950s, and the "macro" story of the birth of the cosmos. The film opens with a mother, father (Brad Pitt), and adult son (Sean Penn) enveloped in all-consuming grief over the death of their son/younger brother. This opening has a jumpy, unsettled feeling that effectively conveys the state of loss. 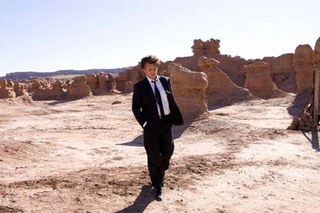 Malick segues into an extended section representing the story of creation, following the sequence of events outlined in Genesis. From an almost abstract visual tone poem composed of swirling clouds, brilliantly colored exploding sunspots, seas, volcanoes and swimming and creeping creatures, this progression leads to a tropical forest where dinosaurs reign, and where the domination of the strong over the weak is established.

The Genesis story is presented with a poetic bombast that some future viewers will find reverent, but others will find almost laughable. It has the appearance of an extremely well-crafted, high-budget National Geographic nature film. I regret to say that I was most reminded of the programming on one of those TV stations that presents soothing landscape shots accompanied by hymns and Biblical passages. 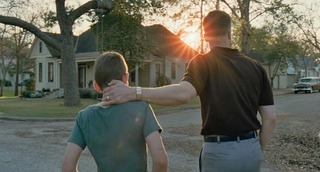 The traditional creation story culminates in man, and in "The Tree of Life," man is a family of five: mother, father, and their three young boys. The father (Brad Pitt), a former military man, is deeply religious, a harsh disciplinarian, and possessed of a fiery temper. His wife is a gentle woman who seldom speaks, and defers to her husband in all things. The boys are typically lively and rambunctious, but Jack, the eldest, is destined to be on a lifelong collision course with his father.

The story of the O'Brien family appears to be autobiographical, although no one knows for sure, seeing as Malick isn't talking. The small town neighborhood milieu and all the details of family life are crafted with loving care. The conflict between father and son feels intensely personal, although this "micro" story has its own larger framework as a coming of age story that is full of boyish pranks lovely and lyrical moments. In one of these, Jack sneaks into a neighbor's home and rifles through a woman's lingerie drawer, holding up a transparent slip with an air of curiosity and wonder. 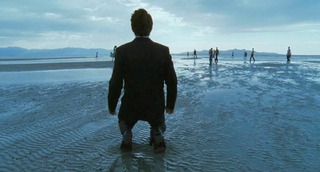 The death of one of the sons at the age of 19 hangs over the past and the present of "The Tree of Life." Jack's metaphoric search through the cosmos for his brother, a theme heavy with spiritual meaning, dominates the film. It strikes me that this theme is one that would only be treated in this particular way by an artist of a certain age, one who has lost loved ones and is acutely feeling the impermanence of life. Malick even conjures up a version of heaven, as families are reunited upon wading into a body of water. God is addressed directly; the soundtrack soars with sacred music. The river Styx? The river Jordan?

I decided to attend the press conference, which followed a half hour after the screening. The stampede of journalists began. Thousands want in when major stars will attend, but the room only holds a couple hundred. Nothing gets people with cameras excited like the presence of Brad Pitt, and they were clustered five and six deep in front of the discussion table in the minute or so that the festival allows flash photos before the start of the press conference. 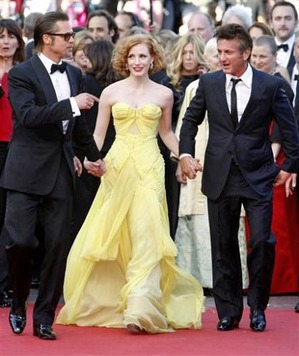 Terrence Malick, a notorious recluse, did not come to Cannes. According to his producer Judith Green,"Mr. Malick is very shy. I believe his work speaks for itself." It was announced that Sean Penn was engaged in humanitarian work in Haiti, and would only arrive at the festival in a few days. In Malick's absence, most of the questions went to Brad Pitt anyway. He was almost unrecognizable in large horn-rimmed glasses, slicked-back long hair, and a mustache and goatee.

Pitt described working with Malick as "a leap of faith." On the subject of religion, he described the director as "more of a spiritualist" than a traditional follower of any faith."We had a lot of theological debates throughout," he said. Questioned by one journalist about his own religious upbringing, Pitt professed to being raised a Christian, but said,"I've got my issues, man; don't get me started. I myself found it very stifling as an individual." 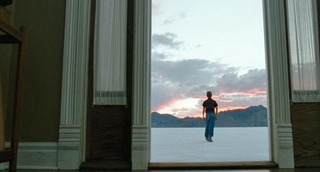 Chaz Ebert revisited the question of why Malick chose not to attend the press conference. The stars and producers really circled the wagons at that point. Malick evidently inspires tremendous loyalty in those with whom he chooses to work. Pitt, Chastain, and the four producers present were clear that the director's privacy is sacrosanct. Pitt said,"He wants to focus on the making, not the selling of the real estate."

At events like this, there's always someone who decides to ask a personal question. A woman journalist asked Pitt to comment on his own parenting style. With a straight face and a hint of disdain, he replied: "I beat my kids regularly; seems to do the trick. And I deprive them of meals."

In an entirely different spiritual vein, today's lineup included French director Bruno Dumont's Un Certain Regard selection "Outside Satan." Dumont is a director whose previous films including "Hadewijch," "Flanders," "Humanity" and "The Life of Jesus," have often raised controversy. His films are set in rural regions that might best be described as portraying redneck France. His characters are close to the land, uneducated, and frequently brutish. His method of storytelling involves shots of long duration with very little dialogue. 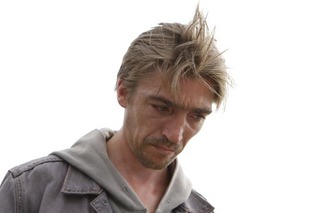 "Outside Satan" is set in a northeastern province of France that Dumont calls home. A mysterious loner camps out amid the grassy dunes and marshes on the shores of the English Channel. He lives on handouts, and has formed an almost wordless bond with a nearby farm girl, his constant companion. Their relationship is not sexual, although she wishes it were. At least one neighbor woman regards him as a kind of shaman, and turns to him when her daughter suffers fits.

The stranger manifests a violent side, and yet it's ambiguous whether he's a murderer or a healer. He frequently falls to his knees in private, cryptic ritual of prayer, with his eyes fixed on the horizon. The girl has begun to follow him in this. She prays with her hands cupped and her arms outstretched. It's unclear to whom or what they are praying. One day the girl is overtaken by evil, and the man performs a miracle. 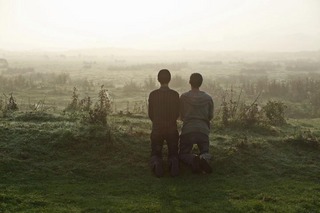 The sound is an extremely important element in this story. In the press notes, Dumont explains that he recorded the sound in mono, and retained all the ambient sounds, whether intended or accidental. The frequently occurring sound of breath on the soundtrack is a spooky, unsettling, transcendent presence. It may be interpreted in many ways, but for me it became at various points the presence of a vigilant evil.

Dumont posits good and evil purely in physical forms. There are no abstract spiritual concepts in this film, no discussions of faith or God. There is only life, be it human, animal, or plant, and there is death, which is an end that can come through swift, brutal actions. Dumont says,"I don't believe in God, and my film doesn't demand any faith from the public besides the faith in cinema."