Atom Egoyan has frustrated even his most diehard fans in recent years with misfires like “Devil’s Knot,” “Chloe” and “The Captive.” Seeing that he had a film playing both in Venice and at TIFF this year, and that it starred two of cinema’s living legends in Christopher Plummer and Martin Landau, fans like myself allowed for hope that this would be the turnaround for the career trajectory of a filmmaker who once really mattered with masterworks like “Exotica” and “The Sweet Hereafter.” “Remember” had its North American premiere last night, in a crowded Roy Thomson Hall, with the Mayor of Toronto on hand to introduce it. As the film unfolded, I tried to read the crowd response. Were they with it? Were they welcoming two of their native sons (Plummer was born in Toronto, and introduced as the “Greatest Canadian Actor of All Time”) back with open arms? Yes and no. It’s not the disaster that the Venice pans made it out to be—Plummer is too committed to allow that—but it’s a film that frustrates more than it satisfies.

Zev (Plummer) wakes up startled most times he wakes up. His wife Ruth died a week ago, and he often wakes up calling for her. He has to be reminded that she is gone, and that his dementia is deepening with every passing day. As a doctor tells his son (Henry Czerny), when someone in Zev’s position loses their spouse, their cognitive issues often decline rapidly. Zev is on the edge of complete memory loss, unable to figure out where he is or what he’s doing when he emerges from sleep.

And yet Zev has a mission. He made a promise to Ruth and to his friend Max (Martin Landau) that he would enact vengeance for wrongs done to him and his family seven decades ago in Auschwitz. Zev lost all of the people he loved and cared about in that concentration camp, and Max has been working with the Simon Wiesenthal Foundation to make sure justice is finally served, before it no longer can be. The man who was the Block Commander in Zev and Max’s unit moved to the United States decades ago, and changed his name to Rudy Kolander. Max has found four men with that name. Zev will travel to each of them, see if he recognizes the face of horror, and then kill someone surely deserving of death. 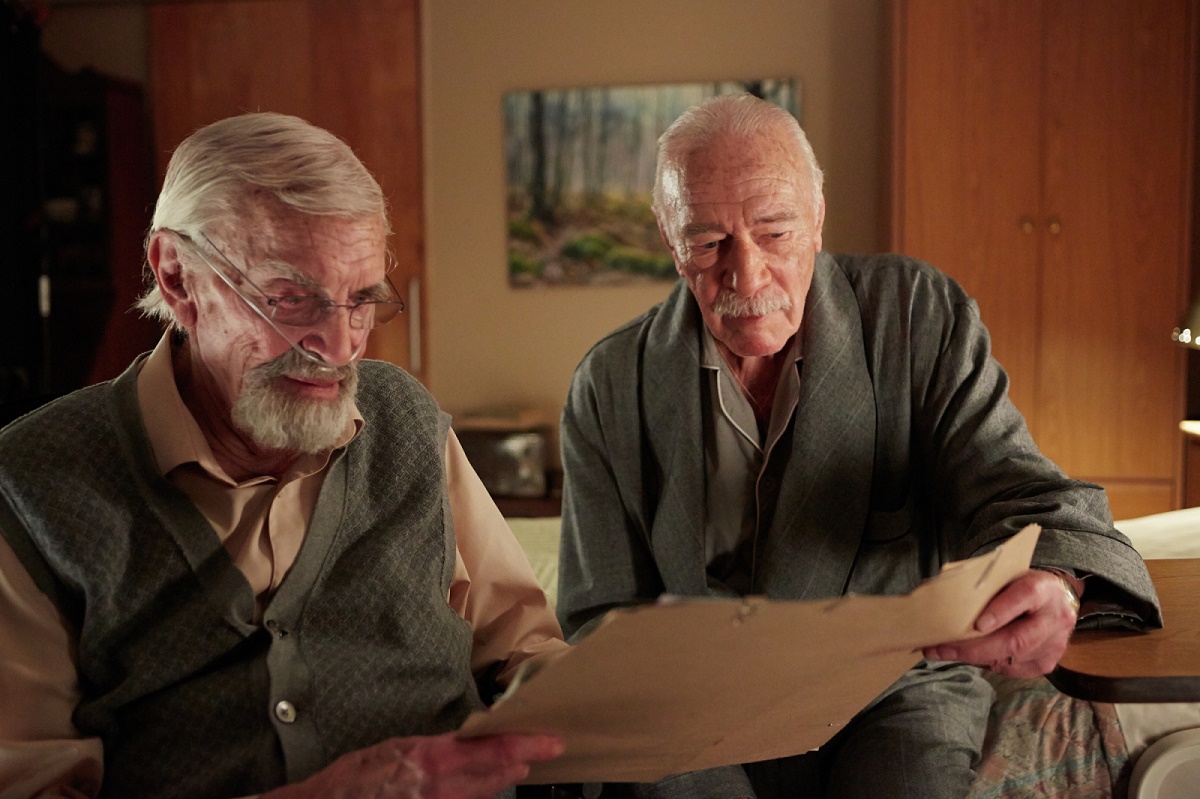 So, Zev gets on a train, guided mostly by Max’s letter, which reminds him every morning of his mission. Max has given him money, and instructs him to buy a gun. Of course, because there’s no running time otherwise, Max meets a few Rudy Kolanders who are not the man whom he seeks. It starts with a cameo by the great Bruno Ganz as a man who served for the Germans, but was stationed under Rommel in Africa. Here’s where “Remember” starts to frustrate. Imagine the conversation these two men could have. This Rudy claims to have had no knowledge of what was happening in the concentration camps, although reveals that he believed Hitler was right about the Jews and that they should have been in work camps. There should be room for thematic development within a scene like this but writer Benjamin August rushes it, moving to the next Rudy, hurtling towards his final twist, which is all he really cares about.

Before Zev finds his Rudy, he’ll encounter a horrendous human being played by Dean Norris of “Breaking Bad” fame and make more than a few mistakes along the way. There are times when “Remember” approaches black comedy, but Egoyan doesn’t go far enough to confirm that direction. Throughout, “Remember” feels like a film that’s tonally indecisive, which really becomes a problem in the climax when it’s impossible to figure out exactly what we’re supposed to take away from “Remember” thematically. There are some who believe that the Holocaust is such a pure evil that we should never use it for entertainment without serious dramatic intent. Those people will have many reasons to hate “Remember.”

I never hated it, largely because Christopher Plummer grounds the piece in a way that makes it easy to believe that this could have been a total disaster without him (most of the supporting performances range from serviceable to awful). Plummer doesn’t just deliver the scared, lost old man turn that other actors would have. He plays Zev as a man who is constantly given new purpose. He loses his drive to old age and dementia, but Max’s letter gives it back to him and he’s focused. I think that’s the most successful theme of “Remember” overall. That we may forget the atrocities that have befallen us and others, but when we are reminded of them we should act with intense morality.

I wish the rest of “Remember” rose to the level of Plummer’s work within it. As is, even a performance this strong can’t salvage a script that needed a rewrite and direction that feels inconsistent. Zev is a man lost in this world, not sure where or who he is at any given moment. The movie about him didn’t need to be lost too.