Jeremy Saulnier’s fantastically entertaining “Green Room,” which premiered at Cannes but made its North American bow last night at TIFF to open the Midnight Madness program with an impossibly high bar to top, tempts critics to use an overcooked adjective in our field—visceral. And yet it’s the word I keep coming back to in my notes and when I consider this excellent thriller, a riff on the classic John Carpenter-“Rio Bravo” model of “good guys inside, bad guys outside” that hums and pumps with blood. Saulnier has produced a worthy follow-up to his great “Blue Ruin,” a film that has different purpose and proves that this is a filmmaker that matters.

The Ain’t Rights are like a lot of young bands in America—struggling. As the film opens, they’ve fallen asleep in their van, and run out of gas. They have to siphon to get to their next gig, only to find out it’s been cancelled. And there are deeper cracks visible but not over-highlighted in this group. Bassist Pat (Anton Yelchin) clearly is a little tired of the “punk aesthetic” that has proven that loving the Misfits won’t exactly make you rich. Guitarist Sam (Alia Shawkat) holds her own against tough guy Tiger (Callum Turner), the lead singer, and the quieter Reece (Joe Cole), the band’s drummer. After the aborted gig, they get a chance for what is basically a make-good that they can do at a compound in Oregon. They’re the opening act in a trio of hardcore bands playing a show for a bunch of neo-Nazi skinheads. That kind of elements comes with hard rock. No big deal. They’ll be fine. Although opening with The Dead Kennedys’ “Nazi Punks Fuck Off” might not be the best idea.

The gang actually survives that kind of ballsy move—although it sets a stage for aggression. It’s not until they’re about to leave that Pat goes back into the green room to get Sam’s phone, which was charging. He stumbles on something he’s not supposed to see. Before you know it, the house manager (the great Macon Blair from “Blue Ruin”) has called in reinforcements, including the group’s leader Darcy (Patrick Stewart). The band has an unexpected ally (Imogen Poots) who knows a thing or two about the group. And, yeah, she’s convinced they’re all going to die. 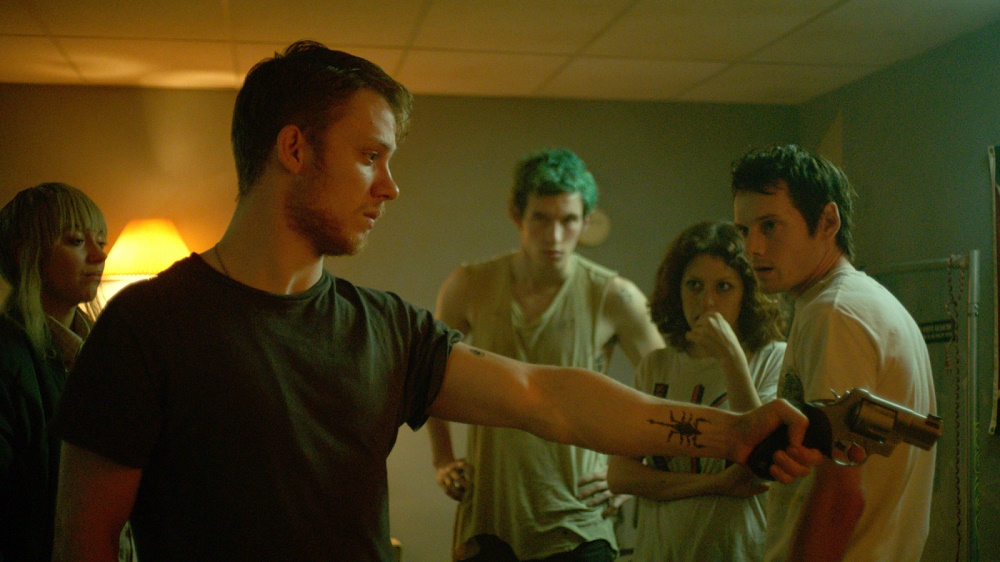 Much like “Blue Ruin,” decisions have impact in “Green Room,” especially when they’re split-second choices between two evils. There’s a moment when the band’s new friend makes a choice that involves a box cutter that produced as big a gasp as I’ve committed in a theater in a long time. It’s when you know there’s no getting out of this without more carnage. And Saulnier brilliantly continues to ratchet up that sense that not only are these poor kids in trouble, but it’s getting worse. They’re digging a hole deeper and deeper and deeper. It’s also essential to the film’s success that violence in Saulnier’s world has a toll. There are no scenes that feel like violence for the sake of blood and gore. And when violence erupts, it alters the trajectory of every character around it. Bones break, blood spills, and it matters. “Green Room” is a relatively simple film on paper, but it never feels over-written or cheaply sensationalized. We feel like the choices being made are genuine, human and real.

This sense of realism extends to Saulnier’s directing style with his cast as well. These people, on both sides of the door, are not exactly professionals. They make mistakes. They pant when they fight for their lives. They cry when tragedy strikes. They breathe heavy, and you can almost hear their hearts racing. That kind of attention to detail is what separates Saulnier from your average thriller director. He also knows how to deceptively frame a shot in a way that’s artistic but never distractingly so from the realism of the piece. Sean Porter’s cinematography is fantastic, using the low light of club spaces in unexpected ways.

Saulnier also knows how to carefully direct his cast. While one may expect a great actor like Stewart to chew the scenery as the leader of a neo-Nazi group, he’s actually very deliberate and calculated. In a very small window of time, and often with looks or just a line of dialogue, Saulnier carves out personalities for both the band members and the skinheads. Blair shines in a crucial role, allowing one to hope he gets character parts like this forever, and Yelchin really delivers, as he’s pushed into the role of speaker for the group against his will.

“Green Room” is a film that seems remarkably simple—a band fights for their lives against Nazis. On one level, it is that easy to pitch, which makes its execution all the more remarkable. Look at Saulnier’s framing, his ensemble performance, his slow ratcheting of tension—and start to think about all the places “Green Room” could have gone wrong. That’s often the mark of a great filmmaker. Ask yourself if your favorite movies could have worked in someone else’s hands. The answer is often no. With “Green Room,” Jeremy Saulnier confirms he’s a visceral filmmaker. There's that word again that I can't avoid. Oh well. He's a great one too.