“'Ruby in Paradise' is a breathtaking movie about a young woman who opens the book of her life to a fresh page, and begins to write.”

With those eloquent words to close his review of Ashley Judd’s breakthrough film, Roger Ebert couldn’t have known the impact that sentence would have. He couldn’t possibly have had an idea that a masterful filmmaker holding a golden cast of his thumb would read that passage aloud over two decades later. And yet that’s what happened on Sunday, September 13th, when Ava DuVernay accepted the Ebert Tribute at the Toronto International Film Festival. After a wonderful introduction from Chaz Ebert, and in front of colleagues like Michael Moore and “her muse” David Oyelowo, DuVernay spoke of Roger’s immeasurable impact on her. Anyone who has seen “Life Itself” knows the story of the girl on the red carpet who would later send Roger a picture of the two of them giving thumbs up. But DuVernay went into further detail Sunday about Roger’s influence, noting how independent films didn’t play in Compton where she grew up. She read Roger’s review of “Ruby in Paradise,” and went out of her way to see it because of that review. That independent film influenced the movies she made like “I Will Follow,” “Middle of Nowhere” and “Selma,” and the book of life that DuVernay has written may not have been the same without Roger Ebert. 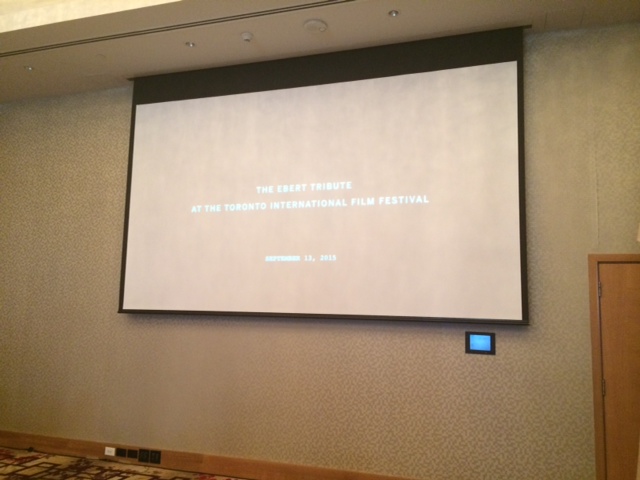 The Ebert Tribute, which honored Martin Scorsese last year, feels like an event that is designed to blend the worlds of film. Producers mingle with directors, screenwriters, actors, critics, and even programmers of other festivals. It includes filmmakers you haven’t heard of (yet) who have movies at TIFF alongside living legends like Moore. In that sense, it captures what Roger really believed—that film is an inclusive art form. It brings everyone to the table, to express their visions and love for art.

So who better to award in year two than DuVernay, a woman who is pushing the boundaries of filmmaking not just with her work on the screen but her tireless pursuit of better representation for women and minorities in her industry? Check out her Twitter account. She is persistent and fearless. Do a YouTube search and listen to a few of her speeches. She is not a filmmaker who works behind the scenes every few years to produce a product. She is a vital, vibrant, constant voice in her industry. 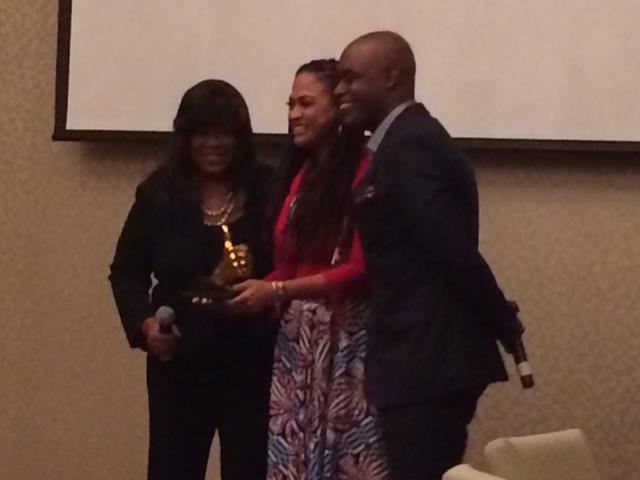 After a brief introduction by TIFF Programmer Cameron Bailey, Chaz Ebert walked the crowd to introduce DuVernay, noting her background as a litigator forces her to move rather than stand still. She praised the fest, thanked her guests, and noted DuVernay’s savvy ability to use her skills from being a publicist to get her messages to the world. There was then a clip reel, including the story from “Life Itself.”

On accepting her thumb, and before getting to the “Ruby in Paradise” story, DuVernay spoke about how much Roger meant to her, and what TIFF means to her. She noted a short film that plays at the fest that includes her narration about diversity in film, and how much TIFF represents that mission statement. She thanked Stephan James (who was there and played John Lewis in “Selma”) and “her brother, her muse” David Oyelowo. Of course, she focused on her relationship with Roger, both as a fan and then as a publicist, who pitched Roger for 13 years. She loved working with him because he would always listen to pitches for small films. He supported independent film, and would go on to support Array, Ava’s company for filmmakers of color. She said he always treated her with great respect. And that respect was felt throughout the room on Sunday. It felt like the kind of inspiration that doesn’t stop there. It goes on. Like that review that influenced a girl in Compton, Ava DuVernay's work is undeniably making a difference around the world. And it was remarkable to take a minute to consider how we got to this day on the 40th anniversary of TIFF and use the inspiration to move us all forward.