"There's a fungus between my toes that speaks to me."

Cannes has become hot and uncomfortably muggy in a way that has me thinking longingly of the blankets and socks of earlier in the week. As the festival closes in on the final days, I'm hoping for some big excitement on the screen.

When the stiff, futuristic Brandon Cronenberg film "Antiviral" played a few days ago, it gave me cause to look forward even more to today's premiere of "Cosmopolis" by his father David Cronenberg, anticipating that the contrast between generations would also point up the difference between a wannabe and a seasoned master. Boy, was I wrong. I'm sorry to say that they're both among the worst films I've seen here this year. I've never been this disappointed in a David Cronenberg film. 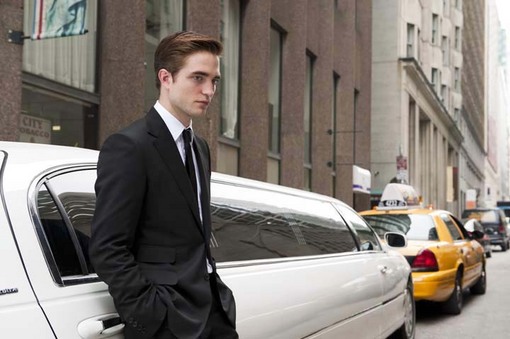 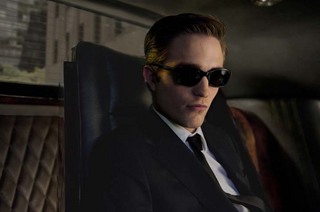 "Cosmopolis" opens with a shot of a row of white stretch limos parked on a city street. The interior of one of them will become a primary location in this film, functioning as the office away from the office for mega-millionaire money manager Eric Packer (Robert Pattinson), an arrogant and powerful 28-year-old. Seemingly inspired by the Occupy movement in the U. S., the story is set in New York in the near future (although what we see of the urban landscape never looks like anything but Toronto; even the CN Tower is seen in the background). The president of the United States is due at any moment, a situation tying up the streets with blockades and large-scale protests. 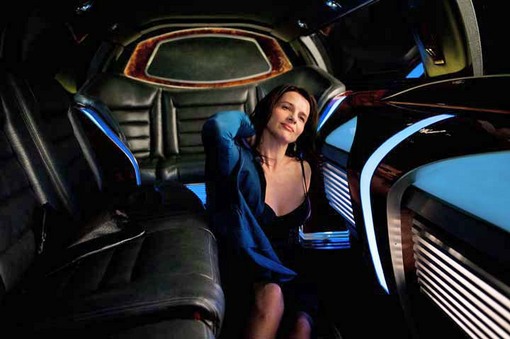 Most of the actors deliver their lines with a mannered lack of expression reminiscent of "Antiviral" (I guess this is what the future is like). Packer spends a day from morning until night trying to get across town in the car in order to visit his favorite barber. In the course of the day he takes meetings in the car for unrelenting serial talkathons on subjects that revolve around money and the global economy: "What does it mean to spend money? A dollar? A million?" The dialogue is rife with rhetorical questions. 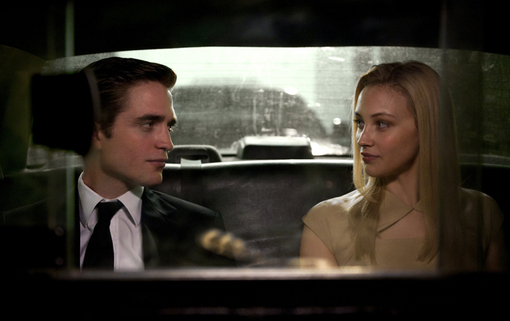 Packer meets with his new bride, an icy blonde (Sarah Gadon) from whom he's already estranged, and admits that his fortune is vaporizing in the day's markets. Some of his meetings turn into impersonal booty calls. After sex with one of his employees he comments, "You're the kind of woman who's born to be strapped to a chair while a man tells her how much she excites him." Her response: "How come we've never spent this kind of quality time before?" 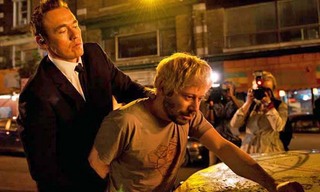 Protestors fill the streets and invade a diner to hurl dead rats at the customers. A gigantic rat puppet is paraded past Packer's car, which is eventually vandalized with spray-painted graffiti. My one favorite laugh-out-loud moment involved a cameo by French star Mathieu Almaric as a protester who smacks Packer in the face with a cream pie then prances around the car delivering a manic rant until hauled away by security. 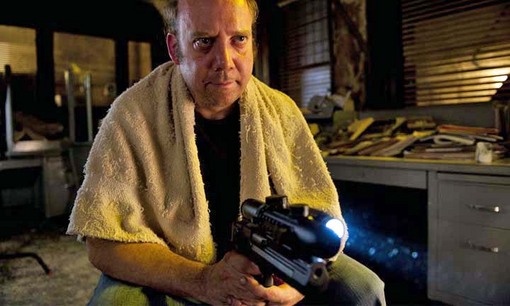 Sometime after nightfall, Packer finally reaches his barber, an old man in a decrepit shop in a slum neighborhood. Only two more big talkathons to go before this film ends. Packer's nemesis, the man who's trying to kill him, turns out to be a disgruntled former employee (Paul Giamatti), a dweeb with a damp towel draped over his head. The film's superficial political commentary is summed up in the absurd quality of their encounter, which includes lines like, "There's a fungus between my toes that speaks to me." 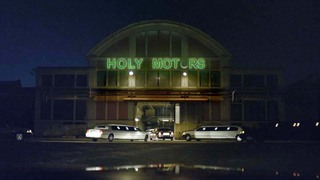 Several times in the course of "Cosmopolis," the question is asked: "Where do all these limousines go at night?" This generated an undercurrent of laughs throughout the theater, because of course we all know where they go at night--the fleet of white limousines in Leos Carax's "Holy Motors" showed us that. We also know that they talk to each other when they're alone. Would that "Cosmopolis" had that much of a sense of humor. 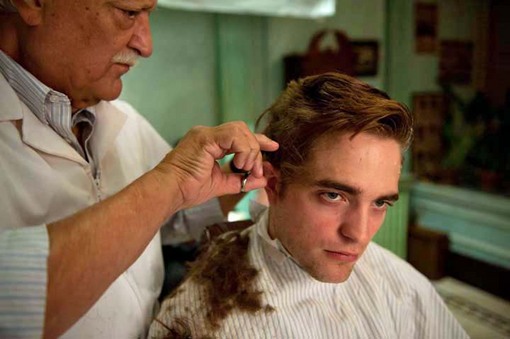 "Therese Desqueyroux" by Claude Miller, will screen out of competition on Sunday following the awards ceremony, as the festival's official closing night film. Today it was screened for the press in Salle du Soixantieme, a big theater with a tented roof that's an adjunct construction on top of the Palais, reached by many flights of outdoor steps..

Miller began his career as an assistant to notable directors including Robert Bresson, Jacques Demy, and Jean-Luc Godard. His films that have received festival exposure or limited distribution in the U. S. include: "I'm Glad My Mother Is Alive," "La Petite Lili," and "The Little Thief." He can usually be counted on for a well-crafted film with strong acting performances, and "Therese Desqueyroux" fills the bill as an entertaining closer. 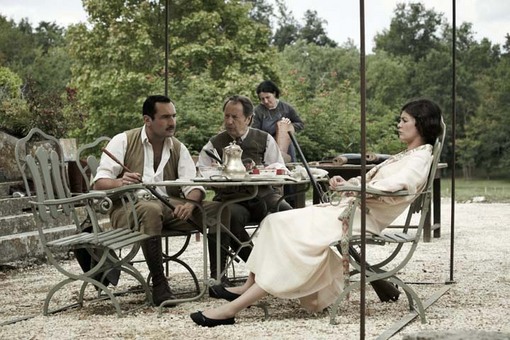 The novel by Francois Mauriac was first made into a film by Georges Fanju in 1962, as "Therese." Miller recounts in an interview in the press notes that his version deviates significantly in structure and character from both the novel and the Franju adaptation.

"Therese Desqueyroux" opens with a scene set in 1922, as Therese and her friend Anne, two madcap 15-year-old girls, enjoy the summer on an estate near Bourdeaux. The film jumps to 1928, and Therese is about to marry Anne's much older brother Bernard in what comprises a merger of the vast land holdings of two wealthy families more than a love match. 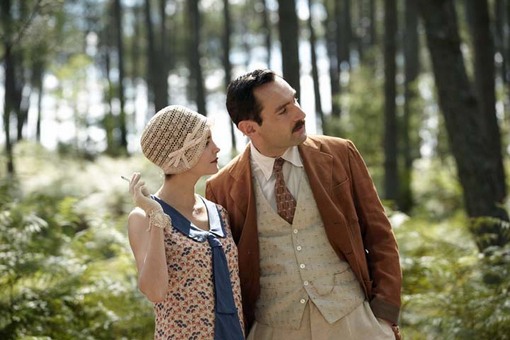 Unromantic Therese is of a pragmatic character, and initially looks for no more from her marriage than security. When Anne sows wild oats with a neighbor in an unacceptable relationship, Therese soon begins to understand what she's missing in her own life. She becomes a mother but takes no interest in her child. Increasing discontent with her lot takes over, and when a doctor prescribes arsenic drops as a treatment for Bernard's heart condition, she sees her opportunity for release. Bernard survives, but the family reputation must be protected from the resulting legal mess. Therese finds that the constrictions of family and respectability are bound around her more tightly than ever. 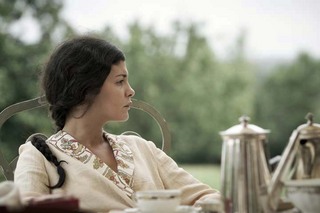 "Therese Desqueyroux" is a treat to watch, especially for the beauty and detail of the interiors of the great country houses where the story takes place. It's not an adventurous film, but it's a satisfying one on its own more mainstream terms. The casting of Audrey Tautou ("Amelie from Montmartre") as Therese is a bit problematic though, since the actress is playing twenty-one but looks every bit of her 35 years. That's a minor quibble, as Tautou is good in the role, but the dynamic of the relationships would have been very different with an actress who didn't have the same hardened confidence and matronly bearing. 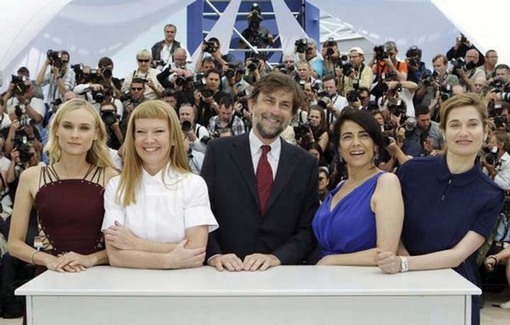 Speculation about the ultimate disposition of the awards has been remarkably low-key this year. A critics' poll in the trade magazine "Moving Pictures" has Haneke's "Amour" as the front runner. A similar poll of only French critics in "Le Film Francais" also puts "Amour" in front, with "Rust and Bone" and "Holy Motors" tied as not very close seconds. 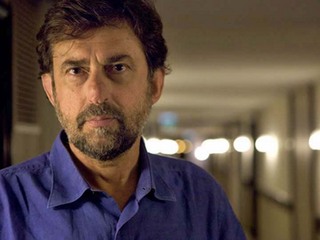 Of course it doesn't matter a bit what any of us sitting in the seats think. Only the jury will decide. At Cannes, the jury president traditionally holds great power in shaping the decisions. It's generally conceded that this year's president Nanni Moretti is a mercurial, and opinionated character. This morning, one American critic friend who prefers not to be quoted by name put it this way: "Nanni Moretti is a know-it-all bully who will fight for what he believes until the last dog dies."

Speaking of dogs, now it's time for cats! Cat-lovers, the moment you've been waiting for is here: the presentation of the coveted Palme de Whiskers, my own annual award for Best Feline Performance at Cannes. It's a scandal that there are only three contenders this year, and I suspect that it's the result of a major conspiracy on the part of the dogs. There were canine roles galore in and out of competition, and dogs even got big death scenes. Who do they think they are -- Camille? It's a sorry comment on the town of Cannes when the only cats I can spot are painted on the window of the Galeries Lafayette department store. 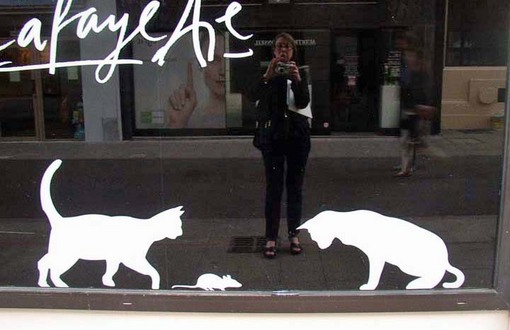 The half-grown tabby kitten that rides around in Suzy's fishing creel in "Moonrise Kingdom." She's an adorable scene-stealer every time she pokes her head out of the basket. She doesn't have a name in the film, so I'll call her Tabitha.

The wild-looking boy with variegated fur and tufted ears that gets tossed out of an outhouse by Viggo Mortensen's character in "On the Road." He doesn't have a name either, so I've named him Tuffy.

The black-and-white tuxedo cat in "Post Tenebras Lux." His big moment comes when he runs across a garden and plays tag with a monkey. I call him Tux.

Renowned felines from all over the world have gathered in the Palais de Kittycats on the shores of the Mediterranean for this special night. Last year's winner, the handsome orange-and-white stud Kimbo has flown in from Korea to present the prize. My own Miss Kitty is mistress of ceremonies. Their coats are shining and groomed to the max. Unlike dogs, that cover their pathetic nakedness with the silly outfits that humans buy for them at French canine accessory stores, cats are complete in their glorious fur. 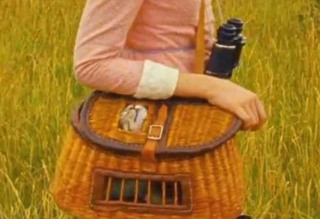 And the 2012 Palme de Whiskers goes to... Tabitha! It's the first time a feline actress of such a tender age has won the award, and that scamp Kimbo, an unneutered male, can't help noticing that she's pretty cute as she slinks up to the podium for her congratulatory lick on the ear. Uh-oh. "You fool, she's jailbait," Miss Kitty hisses in his ear. All's well that ends well, and it's all over for another year as the sound of satisfied purrs fills the auditorium.

They say the rain is coming back tomorrow, and indeed, thunder is rolling in the sky at this very moment as a front moves in. But let it rain! By 5:00 tomorrow morning I'll be in a taxi on my way to the Nice airport. Au revoir to Cannes for this year; I'll be watching the closing ceremony and awards on my laptop from Chicago. 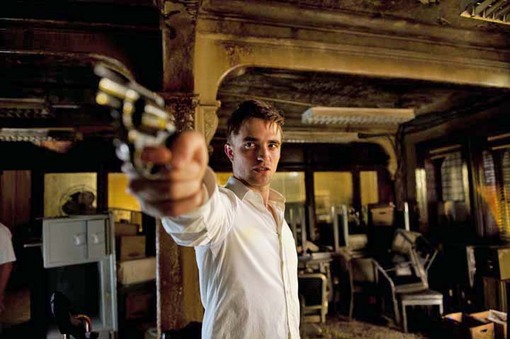