Sundance 2017: Trump and the Politics of Film Festivals

Editor's note: Walker King is one of three recipients of the Sundance Institute's Roger Ebert Fellowship for Film Criticism for 2017.

On Thursday, January 19th, 2017, Barack Obama was president and Robert Redford, founder of the Sundance Film Festival, was opening this year’s event with a press conference. “We don’t concern ourselves with politics. We stay focused on what are the stories being told,” he said. “If politics comes up in the stories the filmmakers are telling, so be it. We don’t play advocacy.” Nine days and one regime change later, Kerri Putnam, Executive Director of the Sundance Institute, took a moment out of the festival’s closing awards ceremony to “acknowledge the artists and documentary subjects from Muslim majority countries who joined us at this year’s festival to share their work.” The audience rose in applause.

“We know that closing our borders to these and other international artists will stop the flow of ideas and inspiration that are so vital to the global community,” she continued. “We stand with you and we stand with all people risking their lives for their values who are now denied entry to our country.” It was a heartfelt announcement that set the tone for the night. Rahul Jain, accepting an early award for his documentary “Machines” on behalf of cinematographer Rodrigo Trejo Villanueva, hesitantly asked the crowd if he was “allowed to go political here.” When prompted by a wave of cheers, he described an airport detention cell in poetic detail. Tarik Saleh, director of “The Nile Hilton Incident,” which won the Grand Jury Award in the World Cinema Dramatic competition, recounted his experiences being detained before every flight he’s taken since 9/11 and reminded the audience that a majority of Americans didn’t vote for Trump. Yance Ford, winner of the Special Jury Award for Storytelling for his documentary “Strong Island,” quoted Elie Wiesel, saying “neutrality helps the oppressor, never the victim.”

So, it appears there’s something of a disconnect at Sundance, between the idea of a perfectly neutral, non-partisan arbiter of artistic merit, the festival that focuses on the stories while politically, as Redford put it elsewhere in the press conference, “the pendulum swings,” and the reality of a filmmaking body that is deeply, sometimes radically, political. The disconnect is so glaring now, the reason 8,000 people will march down Park City’s tiny main street, is because the stakes are higher. Or at least, they seem higher. The Liberal age of the Obama administration is over. Obama was a popular Democratic president who would usher in a golden age of technocratic incrementalism, even as Democratic power at the local level continued to erode. Maybe the pendulum will swing back, but maybe it won’t. We can no longer have any illusions that we are playing without a safety net: it is now allowed for filmmakers to go political. 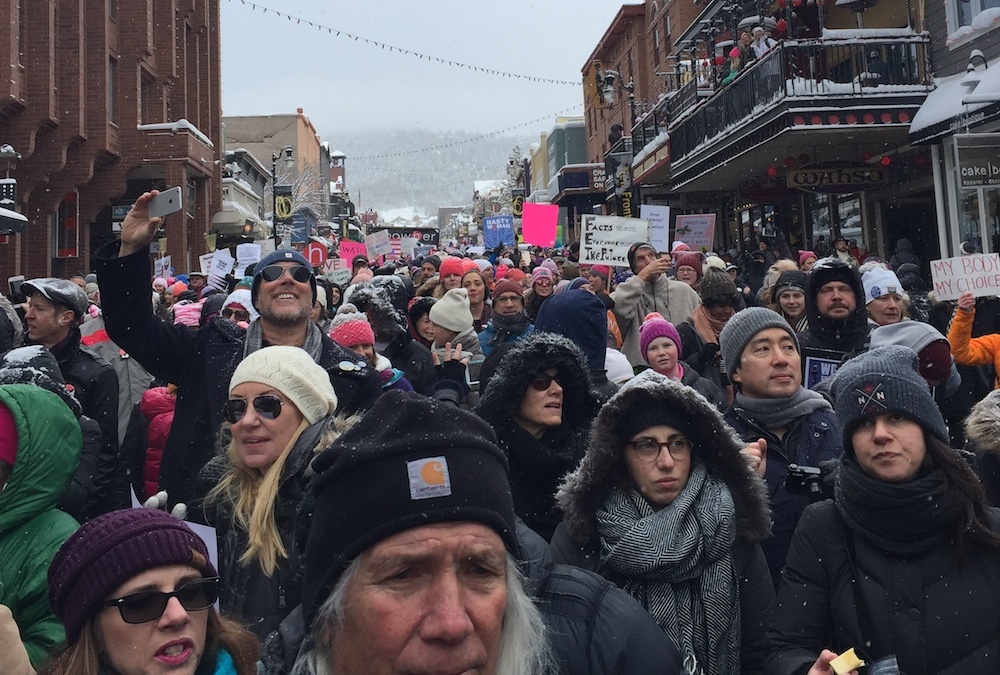 At the risk of staking too much on zeitgeist-y generalizations, there did seem to be something radical in the Park City air. I would overhear hushed conversations on the bus about Republican relatives who won’t stop gloating; directors would introduce their films, even the most purportedly apolitical, with sly allusions to the new President; a woman even struck up a conversation with me before a screening to complain about the film industry’s closed-minded attitude towards her particular brand of libertarianism (I didn’t have much to add). Most visibly, of course, was Saturday’s extension of the Women’s March down Park City’s slushy main street, capped by speeches by Dolores Huerta and Chelsea Handler. A gathering the following Monday to protest the Dakota Access Pipeline was much smaller, but still drew Malia Obama and Shailene Woodley.

If a specter was haunting Park City, however, you could be forgiven for not seeing it reflected in the festival’s programming. You may just not have been looking in the right category. Oddly enough, the two poles in opinion that bookended the festival—Redford’s “we don’t have to be political if we don’t want to be,” and Putnam’s bold awards-show opening—were represented in divisions in programming. Sundance this year seemed dominated by overtly political documentaries and small-scale, personally focused dramatic works. This trend, of course, had outliers: “Dina,” the Grand Jury Prize Winner for US Documentary, is a small-scale investigation into the life of a middle-aged neurodiverse woman more concerned with empathy than issues, while “The Nile Hilton Incident” shows how a murder mystery spirals into a political revolution that destabilizes an entire country.

Still, it seems like truly politically conscious filmmaking—filmmaking that addresses a conflict within or between entire societies—has been largely relegated to the documentary field. “Machines”; “Whose Streets?”; “Nobody Speak: Hulk Hogan, Gawker, and Trials of a Free Press”; “Chasing Coral”; “An Inconvenient Sequel: Truth to Power”; “City of Ghosts”; and a dozen other films put the spotlight on issues and encouraged action, or at least awareness, on the part of their audiences. Some issues are more immediately actionable—it’s more likely that an audience will be able to push their representatives for action on climate change (“An Inconvenient Sequel,” “Chasing Coral”) than unionize textile mill laborers in the Indian state of Gujarat (“Machines”), but the drive to motivate the audience, to instill within them a sense of consciousness of the material world around them that will alter their future life, is the same. Looking at the dramatic program, it’s difficult to make a similar list.

What they lack in political consciousness, though, fiction films of Sundance make up for by promoting a sense of social consciousness: a greater sense of empathy and compassion that broaden an audience’s worldview and strengthen the social fabric. These movies may make you cry, but they aren’t going to drive you to take to the streets. This isn’t to say that there aren’t political implications to be wrung from these works, or that they aren’t admirable movies with incredible power. Films like Justin Chon’s “Gook” (pictured above) and Joshua Z. Weinstein’s “Menashe,” introduced me to worlds I had never seen in cinema, and moved me with their sensitivity and love. But at a time like this it’s important to wonder if film is capable of explicitly exploring both the social and the political. 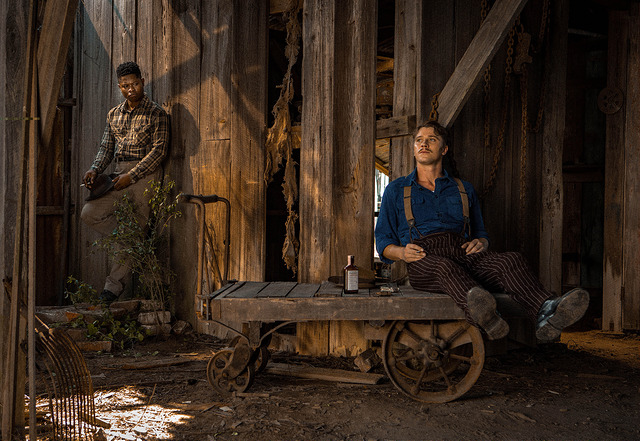 Dee Rees’s justly acclaimed “Mudbound” (pictured above) was the film that best balanced these two impulses. A moving and finely observed look at race relations and oppression in the World War II-era South, “Mudbound” also functions as a fascinating, almost Marxist allegory within its constructed community. In the voice-over that introduces his character, Hap Jackson, patriarch of a black sharecropping family, laments that African-Americans are barred from land ownership through a combination of generational poverty and white plunder, drawing a direct connection between the racist oppression of former slaves and their lack of access to capital. His white opposite, Henry McAllan, instigates the film’s plot by buying the farm the Jackson’s work on with so little thought it’s as if he believes the only thing stopping the Jackson’s from doing the same is a lack of willpower. While not an overt white-supremacist like his Klan-member father, he has no problem enforcing and endorsing racist power structures so long as they help him make a profit off his land, making him in some ways just as insidious. The idyllic farm the Jackson’s purchase in the film’s coda is then not just a cathartic conclusion to their story, but a politically resonant vision of black economic justice. It’s a high-wire act between the didactic and the personal that most films at Sundance avoided.

There isn’t anything wrong with either kind of consciousness, and in fact my favorite films of the festival were intimate, small-scale dramas that derived their power to move from their strong sense of personality and human experience. But it’s still frustrating to see so few dramatic films try to grapple with real and direct political action. In the first place, documentaries have a handicap when it comes to reaching an audience. Even the highest-grossing documentary of the coming year is going to be seen by a fraction of the people who see the highest-grossing fiction films. Beyond numbers though, there’s a question of effectiveness. Stories, and not just documentaries, but carefully constructed and crafted fiction stories, have the ability to penetrate and inspire in a way that documentaries often don’t. Dramatic techniques can be a tool for political consciousness.

The heady political of the ‘60s and ‘70s aren’t so long ago that we should forget that filmmakers then made some of the most stridently political fiction films ever. In Europe, Gillo Pontecorvo made the “The Battle of Algiers” about the Algerian War for Independence and the brutal response of the occupying French forces, while Jean-Luc Godard, one of the world’s most highly regarded art-house filmmakers, made “Weekend,” a movie that stops dead in its tracks for a to-the-camera lecture about decolonization (Godard would quit mainstream filmmaking altogether shortly after to make experimental communist tracts as part of the Dziga Vertov group). In America, moody, paranoid mysteries like “The Parallax View” and “Chinatown” asked whether the dominant political and economic order of the world could be fought by an individual armed with hardly more than a need to find out the truth. The deck may be stacked against them, but these films valorize the struggle anyway.

If my observations from Sundance are any indication of the actual will of today’s filmmakers, then there’s no shortage of political drive in the film community. The need for politically conscious cinema, and specifically politically conscious fiction works, has never been more pressing. While fears of being strident, or preachy, or blunt may be warranted, is it really worse to make a clumsy drama tackling political issues than to be an activist as a private citizen and an agnostic in one’s art? The powers of fictional storytelling, the powers that build love, compassion, empathy, and fellowship, are formidable. Now is the time to bring them to bear on the political conflicts that will reshape society in the years to come.