Imperator Furiosa’s feminist declaration of “We Are Not Things” goes far beyond the rebellion within “Mad Max: Fury Road,” but to a global, modern scale. In world cinema, it’s been the frustrated root of numerous films, like France’s “Mustang,” the Ethiopian “Difret,” and the upcoming Guatemalan movie “Ixcanul.” All of these movies concern a woman’s free will being excluded from marital traditions, as perpetuated by patriarchal societies. These films don't share the same ending, but the issue persists, and the stories must be told.

This year at the festival, at least two films are thoroughly outraged by these harmful traditions, their focus put upon those who challenge the cycle that has created such inequality. The documentary "Sonita" (which just won the festival's Grand Jury Prize and Audience Award for world cinema documentary) has a more dream-like fantasy with its course of events. It is the narrative film, “Sand Storm” (recipient of the World Cinema Grand Jury Prize: Dramatic) that provides even less room for optimism as it tackles a social injustice with a giant, fascinating fury.

With a compact scope across three generations, debut writer/director Elite Zexer’s “Sand Storm” focuses on the widespread harm of these marital traditions. The source is a gutless, entitled patriarchy, as symbolized by father/husband Suliman (Hitham Omari). “Sand Storm” opens with his second wedding in his Bedouin Village in Southern Israel—his first wife, Jalilia (Ruba Blal), has to cater the event, and even assemble the bed he will consummate on.

Meanwhile, his daughter Layla (Lamis Ammar) falls for a boy at her university named Anwar (Jalal Masrwa). She wants to marry him (and even thinks such freedom is possible), but Anwar is from another tribe, and also not Munir, the man that Suliman would rather marry her off to. Witnessing all of this is one of Layla’s younger sisters, Tasnim (Khadija Al Akel), who bounds throughout the house and sees the different events, herself not yet programmed to what her future will be like as a woman.

As “Sand Storm” shifts character attention between Jalila and Laya, the film only seems unfocused if you’re looking at their arcs as individuals. Taken as a big picture, “Sand Storm” is a disturbing drama about both genders losing that fight for free will against horrific gender institutions. The women challenge Suliman’s control only so far, while Suliman himself reasons he has no choice when he banishes them for minuscule references. Rarely has a film so unflinchingly presented an indifference to fight against this life-destroying farce, while showing how patriarchy perpetuates through only a shallow significance of power. The effect is staggering, as “Sand Storm” becomes an incendiary tragedy about gender roles.

Zexer’s fury shows throughout her tight script, in the grave pauses that actors share with each other, or the dialogue that cuts to the very dramatic core of their issues. (“Don’t you ever do anything you want to?” Jalila asks Suliman.) Cinematographer Shai Peleg makes great use of poetic framing (especially when using thirds), as the domestic space occupied by the women proves to be wide but empty, more associated with chores than opportunity. 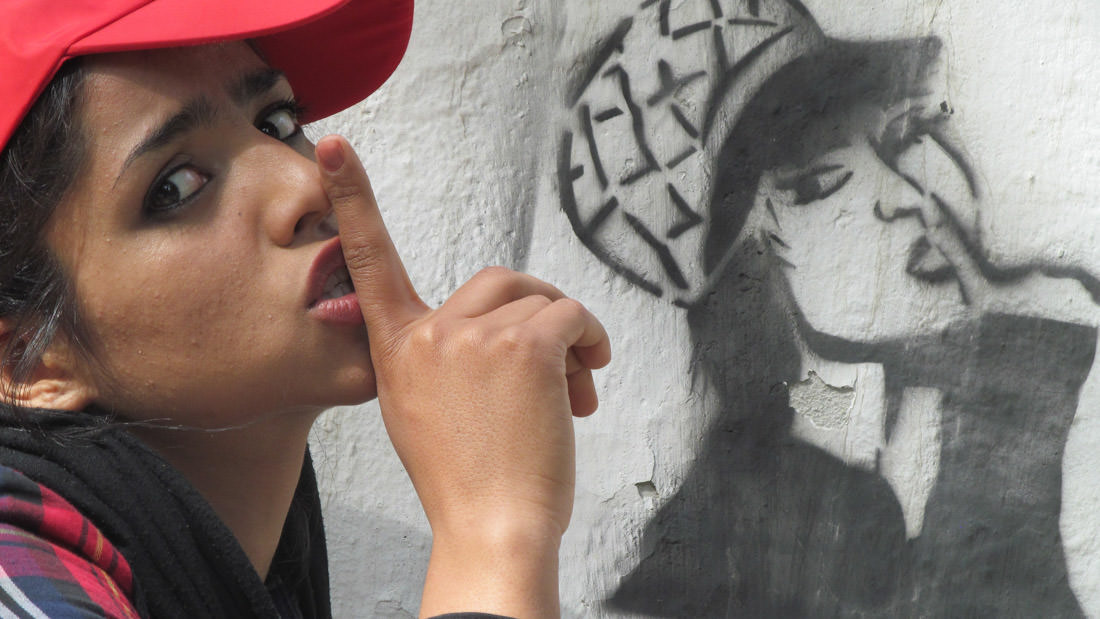 Mirroring the barren walls of Jalila's and Layla's home are those of the real life Sonita, the subject of a gripping doc from director Rokhsareh Ghaem Maghami. "Sonita" tells of a young woman who is geographically removed from traditions of child brides, but is pulled back into it. She fled the traditions of Afghanistan years ago to live in Iran (where women can choose if they want to be married or not), but now her brother wants to sell her so that he can buy his own bride.

The story isn't that much different for Sonita's peers, a group of young women at school who deflect with a shy smile or laugh the stories of abuse they face from the men controlling them. Headstrong and believing that people will support her, Sonita is less willing to just accept these conditions. Before the deadline for her payment arrives, she wants to break away by following her dream of becoming a rapper—even though it is illegal for women to perform in Iran without a permit, or record in a studio.

"Sonita" has a fascinating closeness to its title subject, as Maghami captures very personal interactions (Sonita failing to appeal to her mother, or rapping for her schoolmates) without an obtrusive presence. The doc gets involved with presenting her rapping skills, including a riveting music video where she raps directly to the camera about her fears of being a child bride. It's a show-stopping centerpiece, and narratively changes the fate of Sonita to something completely unexpected.

As anxieties heighten about Sonita's independence, Maghami appears more on-camera and bonds with her subject—documentary ethics adding as another layer to rich ideas of social justice and musical expression. The question of whether Maghami should intervene with Sonita's sale is a vulnerable nerve throughout, and makes for fascinating, raw scenes in which she talks to Sonita and other subjects on-camera about what she should do—even the boom operator speaks up.

Especially when it hits a heroic third act, Sonita's saga does feel like a huge exception to what happens to so many women around her. But Maghami's film brings to an honest light the intangible emotional madness within these marriage traditions. "Sonita" puts a defiant face and expressive voice to a resistance that needs to be as loud as possible.