Sitting on the Croisette, watching the auteurs go by...

It's another day for umbrellas and rain slickers, not to mention sweaters. The Riviera is just not delivering the usual idyllic sunshine and warm Mediterranean breezes this year. The film market stands that border the beach in little cabanas have their doors closed for protection from the wet, and their inviting tables and deck chairs on the sand are vacant and dripping.

The first film in competition this morning, "You Ain't Seen Nothin' Yet" by Alain Resnais, didn't deliver either, and I can only hope that the title is prophetic, and that the revered 90-year-old director ("Hiroshima Mon Amour," "Last Year at Marienbad") has some future masterpieces in store for us yet. 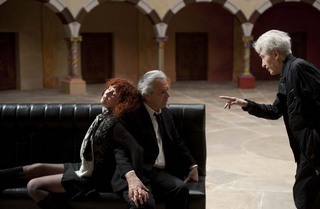 For "You Ain't Seen Nothin' Yet," Resnais assembled a large cast of famous French actors with whom he's worked over the years, including Sabine Azema, Anne Cosigny, Mathieu Amalric, Michel Piccoli and Lambert Wilson. This distinguished cast was supplemented by the young stage actors of the fledgling theater company Colombe. The visual techniques and acting style of the stage are pertinent to the look of "You Ain't Seen Nothin' Yet." In the film's press book, Resnais says, "In my films, I'm constantly looking for a theater-style language and musical dialogue that invites the actors to get away from the realism of everyday life and move closer to a more offbeat performance."

The artificiality of his technique worked brilliantly in his last film "Wild Grass." The theatrical approach seems more like an exercise for his in-group cronies in this film. In the framing story of "You Ain't Seen Nothin' Yet" the featured members of the cast, all playing themselves, each receive a phone call informing them that Antoine, a director/playwright friend has died. His last wishes are that his friends are to gather at his chateau for the reading of the will and the funeral. 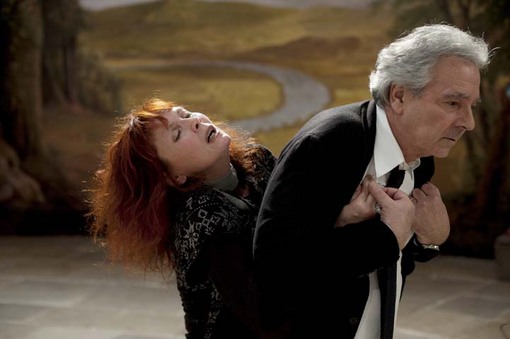 The film then moves to the set of the great hall of the chateau, where they are welcomed by the butler, who will also function as the master of ceremonies for what is not a reading but a show. Once the actors are assembled in their seats a screen is uncovered and Antoine appears on film from beyond the grave to address them each by name, citing the roles they had played in various productions of his play "Eurydice." He reveals that a young theater company had recently petitioned him to be allowed to present the work, and urges his friends to watch the filmed version that follows to judge whether their request should be granted. 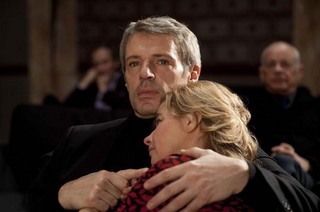 What follows is a performance adapted from "Eurydice" by Jean Anouilh, by the young multicultural cast of La Compagnie de la Colombe. The actor friends become entranced as they watch the screen, falling into their old roles and relating to each other as characters. Since two different casts of "Eurydice" are represented among them, duplications include two Orpheus characters and two Eurydice characters. Altogether, three performances are in progress, the one on the screen that they are watching, and two playing out in the halls and rooms of the chateau as the actors wander around. The framing portion of the story is based on an Anouilh play, "Cher Antoine ou L'amour Rate." 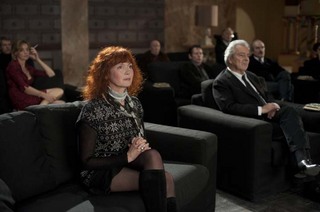 If this all sounds complicated but dry, unfortunately it is. Probably more critics were sound asleep in their seats in this screening than in any other of the festival so far (the screening time of 8:30 am didn't help). The primary focus was of course the seasoned stars, who emote their hearts out in showy scenes. The Colombe performance, which was contemporary and earnest, is the punctuation. The concept of the same roles played simultaneously by actors of three different generations obviously excites Resnais enormously. I wish he could have engaged his audience with the same fervor. The film's surprise ending was too little too late.

The rain continues, alternating between a drizzle and a fine mist. I race through the film market making visits to Iranian film stands to pick up press kits. The Iranian stands also offer delicious healthy snacks to their guests: salted pistachios, dried dates, pumpkin seeds, a white nougat candy stuffed with chopped pistachios, or a rosewater gelatin candy rolled in chopped pink petals. If you've ever wondered what a rose tastes like, this is exactly it.

From the theatricality of Resnais I went to the realism of Pablo Trapero's "White Elephant," screening in "A Certain Regard." The Argentinian director typically structures his dramas around social issues. "Carancho" (2010) was about insurance fraud, and "Lion's Den" (2008) was about women who raise their children in prison. Both were selected for Cannes in those past years. 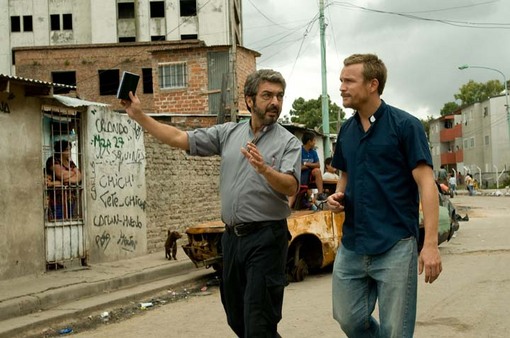 "White Elephant" is the story of two Catholic priests, Julian and Nicholas, serving in a shantytown slum of Buenos Aires, where rival drug gangs own the streets and government corruption and neglect hold sway. Trapero uses real locations and works real history into his story, including many references to the legacy of activist priest Carlos Mujica, whose 1974 assassination was attributed to the Peron regime.

Julian and Nicholas each have their own sorrows and temptations. Julian is concealing a life-threatening medical condition. Nicholas, who came to Buenos Aires from an Amazon mission where his parishioners were slaughtered by the military, is experiencing a crisis of faith through his increasing attraction to Luciana, a young social worker who is one of the priests' collaborators in their work in the slums.

"White Elephant" seemed less tightly scripted to me than Trapero's last two films, the plot more dispersed and the central thrust of the story more difficult to discern. Spontaneously erupting clashes and shootouts are integral, but I thought his strength is seen less in the larger theme of social action than in emotionally complex scenes that get to some core feelings about life in place without hope. 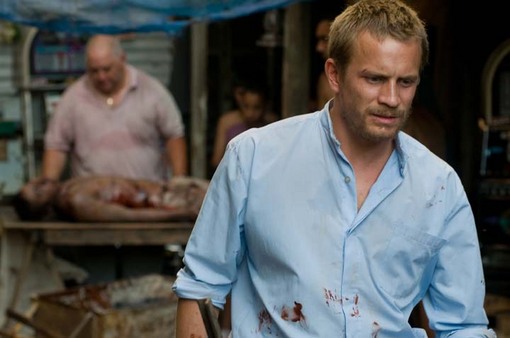 For example, following a shootout, the body of one of the victims has been carried off by the rival drug gang. The boy's mother begs Father Nicholas for help. He's blindfolded with one thug's shirt and led though a squalid maze in which drugs of various kinds are being prepared, to be presented with the boy's bloody, ravaged body, which he pushes home in a too-small wheelbarrow partially covered by a filthy piece of plastic. The boy's funeral procession takes place in the pouring rain as a clutch of his family and friends carry the coffin through muddy alleys, the men solemnly shooting their pistols in the air over and over again.

"The Angels' Share," Ken Loach's thirteenth film to premiere in competition at Cannes, had the evening press screening slot. This comedy set largely in Glasgow is more akin in spirit to his 2009 comedy "Looking for Eric," than to his 2006 Palme d'Or winning drama "The Wind That Shakes the Barley." I don't consider it to be one of his best films -- it's silly and slight, and there are times when the humor doesn't aim higher than the level of "The Three Stooges." On the other hand, it's good-hearted, as Loach comedies tend to be, and I suspect that it will find an appreciative international audience. 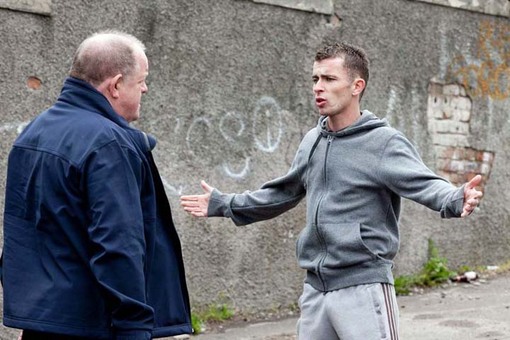 The Scottish subject matter, including much lore surrounding single malt whisky and its production, may go along way towards endearing it to many. There's also the tourism-by-proxy angle, and although much of the film takes place on the gritty side of Glasgow, things are kept picturesque enough to signal that this isn't social realism. Scottish accents are thick, and the film was subtitled in English in tonight's screening.

Robbie, a young ex-con with one serious crime in his past, is newly sentenced to community service for a misdemeanor just as his girlfriend Leonie is about to give birth. He vows to go straight for the sake of his baby son. His new best pals are three goofball fellow delinquents, and Harry, the supervisor of the community service crew, takes him under his wing. On his day off, Harry takes the bunch of them on a distillery tour, which proves to be an eye-opener for Robbie. 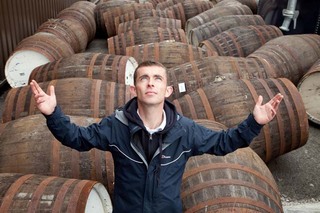 It's best not too look too closely at this plot. With Leonie's strong support as the moral compass, Robbie's transformation into an all-around striver on behalf of his little family is lightning-fast. So is his new-found passion for studying whisky esoterica when it turns out that he has a special nose for discerning the provenance of even the most obscure samples. Two paper-tiger villains, Leonie's tough dad, and a bully from Robbie's past are threats early on, but they disappear without a trace in the second half. 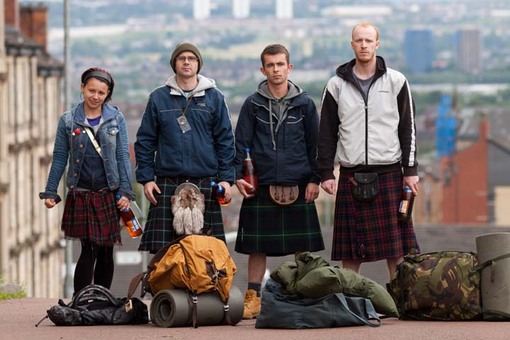 Eventually "The Angels' Share" turns into a heist film, and the goal is pilfering some impossibly rare whisky from a cask that's expected to sell at auction for more than a million British pounds. How Robbie reconciles this with his new resolve to go straight isn't explained. He and the three buddies head for the highlands wearing kilts, representing themselves as the newly founded Carntyne Malt Whisky Club. How four losers who don't have jobs and who are so culturally deprived that they don't recognize Edinburgh Castle when they see it acquire authentic Scottish kilts with all the trimmings as well as camping gear isn't explained either.

Oh well, this is the kind of comedy where either you go with the flow and laugh or you don't. Critics around me were scowling, but there were a lot of laughs coming from the upper reaches of the Palais. 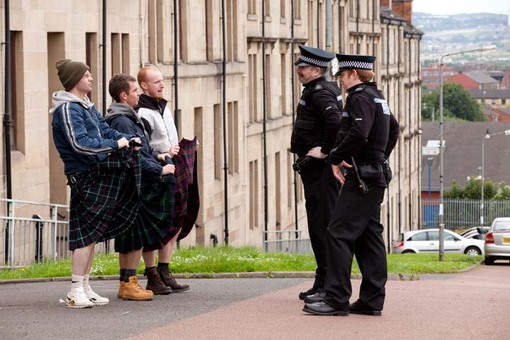