Shadows on the screen: The angel and the devil

There's a slide that appears on the big screen in the Debussy Theatre while audiences file in for screenings for the A Certain Regard section of the festival. Two figures in profile, one of them with horns on his head, are shown in silhouette against a light background. It's actually a photo of this year's Cannes jury president Tim Burton with Batman, but I continue to see it as an angel and a devil.

I'd rather think of this image as a something mysterious, signifying the light and dark of cinema perhaps, or in a more mundane vein, as a reminder that the movies we're about to see here may be good or bad. That movie devil must be hard at work this week, because questions of light and dark in the moral sense are very much factors in films I'm seeing in the second half of the festival.

Based on real events, "Of Gods and Men" by Xavier Beauvois is a fictionalized drama of seven French monks in an Algerian Trappist monastery, whose placid life of service is threatened by the rise of Islamic extremism in their region. We see the way the monastery has existed for decades in a symbiotic relationship with its Muslim neighbors, sharing the poverty and hard labor of nearby villagers, offering rudimentary medical care in the most basic of clinics, its monks sharing in local celebrations and sorrows. When the monks are threatened by terrorists, their plight is no worse than the other locals. The difference is that they have the option to flee and save themselves. 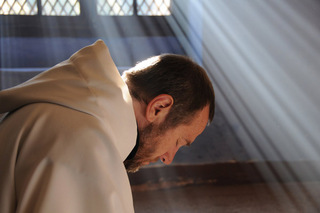 "Of Gods and Men" is not really about whether the monks live or die. That aspect of the story has already been determined by historical fact. Director Beauvois is more interested in portraying what it means to live a spiritual life in concrete terms, to honor what the men believe to be a commitment to the mission of care assigned by a higher power. Communal song and prayer are integral to this life, and we see each man struggle individually with accepting their communal decision to stay and continue their work with the villagers.

There is a very beautiful scene in which the monks, who normally eat their spare meals in silence, are allowed to open the two bottles of wine brought by a visitor. One of the older monks surprises his brothers by putting on a record of "Swan Lake." The camera slowly pans around the long table as each man with his small glass of wine in front of him, perhaps the first in a long time, reacts with emotion to the music. 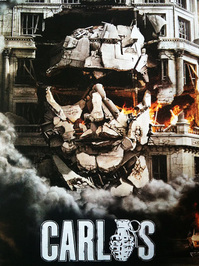 "Carlos" by Olivier Assayas ("Summer Hours," "Clean," "Irma Vep"), takes on the epic story of international terrorist Ilich Ramirez Sanchez aka Carlos Martinez, now residing in prison, whose career exploits ranged from leading the 1975 hostage-taking of OPEC oil ministers, to selling himself to the highest bidder as a freelance mercenary. This is some of Assayas' best work in years: provocative, tightly scripted despite its length, and somber yet exciting.

Seeing "Carlos," I can forgive Assayas for comic-book dreck like "Demonlover" and "Boarding Gate." The politically complex plot is laid out succinctly, making the alliances and the place of its many characters clear without sacrificing nuance. Venezuelan actor Edgar Ramirez is marvelously cast as Carlos, bringing a contemptuous charisma to the role of a man who claims that weapons are an extension of his body, values the lives of others cheaply, and uses the many women who are drawn to him as pawns. 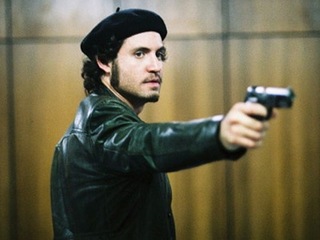 "Carlos" is a TV drama in three parts, totaling five hours and 33 minutes. I saw Part One and left at the first break, although the film had me completely in its grip. This too, is the reality of Cannes. There are too many other films to see, too few hours in the day, to justify devoting almost six hours to one film, no matter how much I like it. I hope to catch up with the remaining two parts another time, and I have no doubt that "Carlos" will soon be heading for some North American festival before the year is out.

If I hadn't left "Carlos," I would have missed the incredible Peruvian film "October" by brothers Daniel and Diego Vega, a film so gentle and so beautifully rendered that it seems to have benefited from an angel's touch. Clemente, a taciturn pawnbroker, operates his business out of a decrepit apartment in a Lima slum. He keeps his money and the small items he takes as security in a cashbox in his broken oven. He's something of an unfeeling jerk. He visits the local prostitutes to take care of his sexual needs, and otherwise lives for his business. 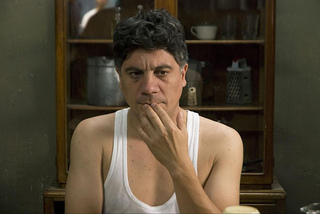 One night he comes home to find that someone has broken into his place and left a baby girl in a frayed basket. Although he will tell people that he rescued the abandoned baby on the street, he's clearly not the kind of man to rescue a baby. He knows quite well that she's his own child, dumped by the hooker he impregnated. He proceeds to ignore the hungry, crying infant for a day, reluctant to even touch her. When efforts to leave her with social services fail, he hires a neighbor, Sofia, to take care of her.

With Sofia's arrival, life begins to change around Clemente, and that life begins to pass him by. Despite obstacles thrown in her way, Sofia creates a home. Before long, an elderly couple is staying in the apartment too. Clemente doesn't exactly protest, but instead of opening up, he redoubles his efforts to close himself off. Eventually, Sofia takes definitive action, but it may be too late for the pawnbroker to appreciate what life could offer.

"October" has little dialogue, and so the visuals convey much of the meaning of the story and reveal the faintest undercurrent of deadpan humor. For instance, Clemente conducts transactions with his clients at an old dinette table, where he sits in a normal chair while they sit opposite him on a low stool at about nose height to the table, an almost laughable image underlining the balance of power in the relationship. "October" is set during an annual religious feast in Lima, in which magnificent street processions are a normal sight, and this too flavors the story with the hope that miraculous transformations are possible. 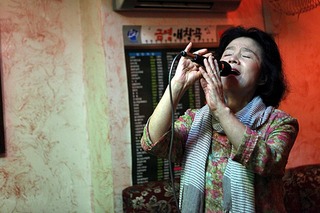 Korean cinema triumphs once again in this festival in my book, with the premiere of Lee Changdong's "Poetry." Like Im Sang-soo's "The Housemaid," this is a film that features a stunning performance by a veteran Korean actress. Yun Junghee, who has made more than 300 films in her career and was voted the greatest actress of all time by the Korean public. She came out of retirement to play Mija, a 65-year-old grandmother raising her belligerent grandson alone.

Although Mija lives hand-to-mouth by means of a small government subsidy and a part-time job as a maid, she is an old-fashioned lady who dresses in colorful suits, lacy scarves, and always a hat. She is becoming forgetful, and one day decides to take a class in poetry writing at her local cultural center.

"Poetry" opens with a scene of the body of a young girl, a suicide, floating down a wide, swift river. Before long, it turns out that there's a connection between that body and Mija's grandson and his school friends. This is a case in which I don't want to give too much away, except to say that Mija is greatly troubled by what she learns from the assembled fathers of her grandson's friends. 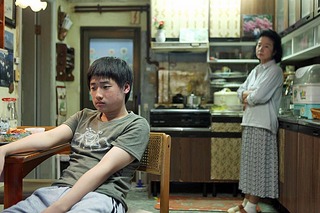 Meanwhile, Mija takes the poetry classes to heart, looking at the world with new eyes. She struggles with the need to find inspiration, not knowing what that would be like, even as she lets the newfound beauty of objects become her buffer against pain. At a meeting in which unwelcome news is revealed, Mija rushes from the room to take notes on a flower she has spied outside the window. She becomes absorbed in the sounds of rustling trees and birds while observing her grandson and his friends playing soccer.

Yun Junghee perfectly balances Mija's deceptively ditzy aspect as a forgetful old lady with her inner beauty as someone who is truly more awake to the world than many of those around her. She still knows right from wrong, and ultimately, her newfound recognition of poetry in ordinary things will lead her to what's right. This is a lovely performance, and one that I feel sure will make Yun an award contender here at Cannes.

Wednesday's adventures included the futile exercise of trying to get into the press screening of Ken Loach's "Route Irish," where a melee erupted at the theater entrance. Some version of this plays out so often that you'd swear that little demons with pitchforks have plotted this scenario in a festival office: a film everyone wants to see is scheduled for a theater far too small to accommodate more than a fraction of the press. 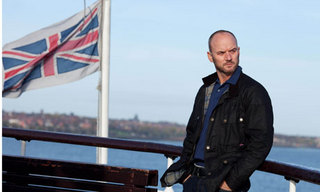 In this instance, the theater was full, and only the white Press Soiree pass (the highest level) was being honored. Suddenly panic set in and the shoving and shouting started. Two men tried to rush the front of the crowd from behind, knocking over stanchions. They were immediately grabbed and ejected from the area by guards. A woman was admitted for one of the last six seats, and an outcry went up from those who claimed she had punched and jabbed them to reach the front. A British woman yelled that she wanted compensation from the festival.

On Wednesday night, Brit Derek Malcolm, wise, seasoned critic for the Evening Standard, remarked that this hierarchical approach in which only the "top people" were allowed in was the last thing Loach himself would want for his film. I asked Derek if I could quote him, and in the best business-savvy spirit of Cannes, he replied, "That will be five Euros, my girl."