As the Santa Barbara International Film Festival moved into its first weekend, one thing became clear: everyone loves Santa Barbara. Living here, I’m accustomed to that sentiment, yet now I’m overhearing it while in line for festival films. Canadians here each year for the festival, visitors from the Midwest, folks driving the 75 miles north from Los Angeles—they say it.

“I love Santa Barbara!” That’s how Eddie Redmayne greeted the audience of 2000 gathered to honor him and Felicity Jones as the co-stars of “The Theory of Everything” on Wednesday evening. “Felicity and I have both had the pleasure of being here at festivals before and we just love it.” With what appears to be a lock on the Oscar for Best Actor, Redmayne charmed the crowd with a winningness matched by Jones, and by, yes, their matchless freshness of youth. Presenting them with SBIFF’s Cinema Vanguard Award, the film’s screenwriter/producer Andrew McCarten (nominated for Best Adapted Screenplay and Best Picture) said, “These two have a combined age of 35, although I might be exaggerating…a little.” 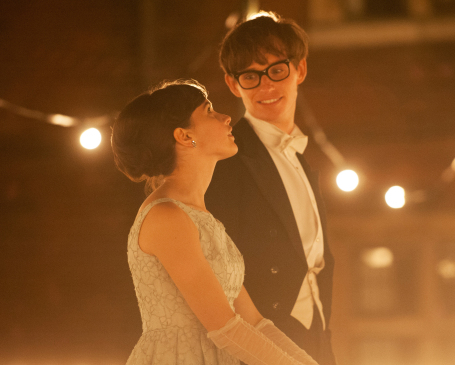 Each of them, beyond the undeniable talent, has that “something,” whatever it is. In Eddie, it’s a boyishness that gets women of all ages, the younger ones for the obvious, the older ones perhaps imagining daughters who’d bring him home as the perfect beau? In Felicity, it seems to start with that overbite, which gets men every time. She’s girlish but also sexy, a killer combination.

Scott Feinberg of The Hollywood Reporter, an SBIFF regular, is both gracious and very knowledgeable, and always does a fine job drawing out younger artists; with Redmayne and Jones, he did it again. Interspersed with clips from “Theory,” as well as other films they’ve done individually (including “My Week with Marilyn” for Redmayne, and the Ralph Fiennes-directed “The Invisible Woman” for Jones), a three-way conversation happened easily. Redmayne allowed that he’ll “go after” parts he wants, joking that he likely won his role in “The Good Shepherd,” playing Angelina Jolie’s son, because he “had a big mouth,” and got to play Julianne Moore’s son in “Savage Grace” because he “had freckles.” The audience laughed, savvy enough to know there was a bit more to it than that.

Jones and Redmayne had known each other for some years, doing theater and even auditioning for a film together, but without getting the parts. Jones admitted that when she learned about “Theory,” she texted Redmayne, reminding him of that joint audition. Eventually, there were three actresses up for the co-starring role of Jane Hawking. But once she auditioned, doing that very challenging last scene of the movie with Eddie Redmayne, there was no question: the magic between them was unmistakable. Felicity Jones got the part, and an Oscar nomination for Best Actress. 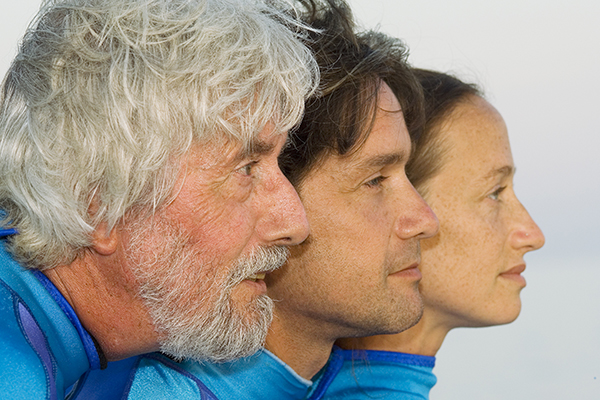 Loving Santa Barbara also means many filmmakers make their homes (or second homes) here. Two of those families were honored this week at the festival. Jacques Cousteau is a name recognized by anyone who can remember the groundbreaking series, “The Undersea World of Jacques Cousteau.” From childhood, son Jean-Michel accompanied his father on lots of underwater explorations, continuing over four decades in that scientific work through his Ocean Futures Society which is based in Santa Barbara.

With his children Fabien and Celine, Jean-Michel, now 75, was presented with SBIFF’s David Attenborough Award for Excellence in Nature Filmmaking. Prior to the Q&A, the Arlington Theater audience watched the brand new “Secret Ocean 3D,” the Cousteaus’ first venture into Large Format cinema. With a couple thousand people donning 3D glasses, the documentary, narrated by the great oceanographer Dr. Sylvia Earle, took us quickly underwater, where we shared the experience of Jean-Michel and another diver as they observed and commented on life at ocean bottom. The camera work by Gavin McKinney is extraordinary, allowing one to actually see inside the mouths of large fish as they open wide, and to view the behaviors of living creatures we might have assumed before to be inanimate. Perhaps most remarkable is the sense that the two diver-explorers appear very much like sea-life themselves, swimming along with the other creatures.

Jean-Michel explained, “What I was drawn to...is that by using new digital macro and slow motion 3D technology, we are able to go one step further in the discovery of the ocean in a way that my father could only have imagined. Even after 69 years of diving, I was blown away by the spectacular images we captured, as I discovered an entirely new world sometimes too small to be seen by the naked eye. My mission for decades has been to educate future generations so that they understand, fall in love with and protect the ocean.”

“Secret Ocean 3D” succeeds in bringing we earthbound creatures much closer to the ocean. And the superb effects achieved using 3D (about which Roger Ebert was outspokenly dubious but which I believe he would heartily approve here) cannot be overstated. The remarkable Cousteau family, so very deserving of this award, continue their pioneering work to protect this vast but threatened resource which humans and other creatures cannot survive without. 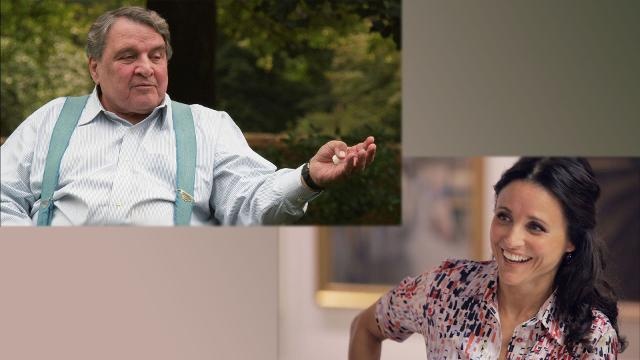 A Santa Barbara native, the writer, producer and actor Brad Hall has family and a home here. Hall was in SB’s schools with my cousin Barbara Altman, who reports “he was always the funniest person in class.” At Northwestern, he met another funny person, actor and comedienne Julia Louis-Dreyfus, and they’ve been together and collaborating ever since. I wrote about their charming short film, “Picture Paris,” which screened at SBIFF in 2011, and knew I’d wish to see their first documentary, “Generosity of Eye” this year. Written and directed by Hall, the film focuses on the decision of Julia’s prominent father, billionaire art collector William Louis-Dreyfus, to donate proceeds from his estimable collection, which includes more than 3000 paintings, in support of one entity, the Harlem Children’s Zone.

As Julia and Brad explained to an enthusiastic audience at the Santa Barbara Museum of Art, this decision was sudden and initially a great surprise, leading to her desire to document the art. At first, the idea was to “do it for the family, particularly their children” but, as often happens, the material began to speak for itself: there was much more here. Brad recognized a documentary in the footage. A personal documentary is a tricky form, with lots of uncertainties about people’s feelings; after Mr. Louis-Dreyfus decided he’d be okay being filmed, Julia had her own emotions to confront, including real surprise as she deepened her understanding of this art she’d grown up around, realizing that until then she really hadn’t understood her father’s deep passion for art nor his involvement with the artists he collects.

The film delves into all of this, featuring interviews with some of the artists, as well as wonderful shots of the collected works, and discussion with various curators over the quality of both the art collected and the collection as a whole. The chance to see and learn about artists such as Alabaman Bill Traylor, a former slave, who worked in crayon very briefly, from ages 80-83, sitting on a sidewalk, before passing away, and James Castle, a deaf Idaho farm boy who never learned to read or sign but expressed himself using soot and tree branches, and the African-American wood and metal worker Thornton Dial of North Carolina is a treat in itself. This leads into an interesting discussion of whether this is “outsider art,” a term Mr. Louis-Dreyfus dislikes intensely, particularly because it seems a disparagement of work that is much more complex than the term suggests.

The film also features terrific shots of children studying at the Harlem Children’s Zone and visits with its vibrant founder, noted educator Dr. Geoffrey Canada. He describes first meeting Julia’s father who arrived alone, eventually discovering the man—and his plan—were for real. The plan—a foundation which will auction pieces of the collection over time, with all proceeds going directly to the HCZ—will help keep this powerful anti-poverty, K-thru-college graduation program, alive and hopefully expanding for many generations.

If I have any quibbles with “Generosity of Eye,” it’s that even more about the fascinating William Louis-Dreyfus would surely be welcome. A question from the audience indicated this: “Could you tell us more about your father’s background?,” as did Julia’s (paraphrased) answer: “My father and his American-born mother were evacuated from France during the Nazi Occupation while his father stayed behind, both to lead and fund the French Resistance. Three days before they were evacuated, they were in a restaurant when some Nazis came in. My father, who was just 7, stood on a table and sang 'La Marsellaise.' Everybody froze. Then the Nazis, who were drunk, laughed at the little boy and left. My father always did have big balls.”

As much as anything, that bold act of a 7-year-old captures the essence of a man with a lifelong passion for both art and justice, helping to explain why he, among “the one percent,” would choose to donate so much of his wealth to a group of people whose ancestors were enslaved, which he explains as “a shameful wrong his beloved America has still not righted.” This is William Louis-Dreyfus’ attempt to help right that massive wrong.

Beginning February 3rd, “Generosity of Eye” can be viewed online, free of charge, here. That’s also where potential buyers may view the art, and learn how to contact the collection.

I’ve seen other films, of course. Two of these are the Best Foreign Film nominees which, like too much of the rest of the U.S., have not otherwise shown in Santa Barbara. I loved them both but further comments are really beside the point as these have been reviewed by our fine critics here: “Force Majeure” and “Timbuktu”.

I’ll comment on others soon, as I close wishing I possessed just a few of the “Olympian writing muscles” of dear Roger Ebert! As someone in “Life Itself” attests, Roger could sit down, start in and conclude within 30 minutes—and of course, the result would be excellent. Me, between seeing films and hearing filmmakers (and driving and parking), I need to percolate, ruminate and sleep, and then, just maybe...