If you think George Tenet's Central Intelligence Agency was a disaster, wait until you see Robert De Niro's torpid, ineffectual movie about the history of the agency, "The Good Shepherd."

Once again, responsibility for the large-scale failure does not lie with the valiant and hard-working operatives in the field (or the actors on the screen), but with the mismanagement of the director himself. It is unlikely, however, that any awards -- including Presidential Medals of Freedom -- will be bestowed upon De Niro or his plodding writer, Eric Roth, for their misfeasance.

The story, and the history, are fascinating -- or ought to have been. Tracing the footsteps of a colorless career spy, Edward Wilson (Matt Damon), "The Good Shepherd" takes us on a long, hard slog through a maze of ... non-linear narrative techniques. Look over there: It's the botched Bay of Pigs operation -- which plays onscreen like the inept invasion and occupation of Iraq. On your left, behind you, is the World War II diorama, featuring a window on the creation of the Office of Strategic Services (OSS). And on your right, just ahead: the Cold War covert-ops exhibit, with pop-up cardboard cameos from the KGB!

It's all far, far less exciting than it sounds, thanks in no small part to the laborious screenplay credited to Roth. Can this really be the guy who shared credit for writing Michael Mann's "The Insider" and Steven Spielberg's "Munich"? "The Good Shepherd" is as dull and inert as those movies are passionate and thrilling.

Imagine a spy movie -- a spy movie! -- with no intrigue, no suspense, and scarcely any characters, even though there are lots of parts and plenty of good actors to play them. Keir Dullea -- you know, the guy from "2001: A Space Odyssey" -- appears barely long enough to register that he is, in fact, Keir Dullea. A half-hour later, there's a banquet scene and, hey, isn't that Keir Dullea, seated third from the left at the -- ? Oh, he's not in the frame anymore.

The rest of the actors, some of whom remain in the frame longer than Dullea, don't seem to be having much fun, either. Michael Gambon, Alec Baldwin and Joe Pesci (one scene and he's gone) provide the only dashes of zest in the film. And if you can't spot the turncoat (with the preposterous accent) virtually the moment he appears, then you're not paying attention, and who can blame you?

Matt Damon's character (a composite supposedly based on several actual spione) is by nature a cold fish, and it's not the actor's fault that he frequently lies there on the screen like a dead one. Wilson is a man with many secrets, and no mysteries.

The most interesting thing about him is not that he engaged in some dignity-defying All-Male Nude Mud Wrestling during a Skull & Bones initiation (it’s a moment that begs for Borat), or that he once knew all the words to “The Whiffenpoof Song.” It’s that he was once, briefly, funny enough to play Little Buttercup in a Yalie production of Gilbert and Sullivan’s “H.M.S. Pinafore.” Or, perhaps the most interesting thing about him is that he stopped being interesting right after college. Also, when he was five, his father committed suicide (hello Timothy Hutton – and goodbye) and he claims he never read the suicide note. When we do discover the nature of its contents… well, it’s got to be the dullest secret never told. Poor Wilson: his entire existence is an anti-climax, but maybe that’s the point. His “Rosebud” isn’t even Rosebud.

Spies, and spy movies, may be somber but they don't have to be glum. The lonely moles in this picture may keep their lips sealed when it comes to international huggermuggery, but they are forever whining to one another about how lousy it is not to have true friends and not to be able to trust anyone, as if these were things they all didn't know already.

One of the movie's themes is that history is always interrupting one's private life. This is conveyed repeatedly, and nearly always literally -- in one scene, by having an emcee in a small jazz club grab the mike during a performance of "Blue Skies" to announce that England and France are at war with Germany. The urgency immediately vanishes from his voice and, in convivial tones, he then reminds the club's patrons to enjoy the remainder of the evening -- they'll be there all night! The band picks up "Blue Skies" again (though "Let's Face the Music and Dance" might have been a better choice) and the couples on the floor (including Wilson and his girlfriend) resume their synchronized movements because, well, what else are they supposed to do? Go shopping?

So, is this a metaphor for America’s willful reluctance to get involved in the European war prior to the invasion of Pearl Harbor? Or are the bewildered dancers simply wondering if the news from overseas could not, perhaps, have waited another minute or two, at least until the band wrapped up the Irving Berlin tune?

Late in the film, a Crucial Mystery Character is introduced boarding a small plane on a remote African airstrip. This in itself does not bode well for CMC's longevity. While related events unfold in other parts of the world, the film keeps cutting back to this uneventful flight in an awkward attempt to whip up "suspense." But suspense is not the same thing as anticipation, especially when it turns to plain old annoyance over just how much longer the inevitable event (hint: deadly) will be artificially delayed before we can move on to something -- anything -- else.

And so, scene after clumsy scene, minute after tedious minute (there are 167 of them altogether), "The Good Shepherd" aimlessly meanders to its dead-end conclusion, rarely missing an opportunity to loop back for an unnecessary flashback. 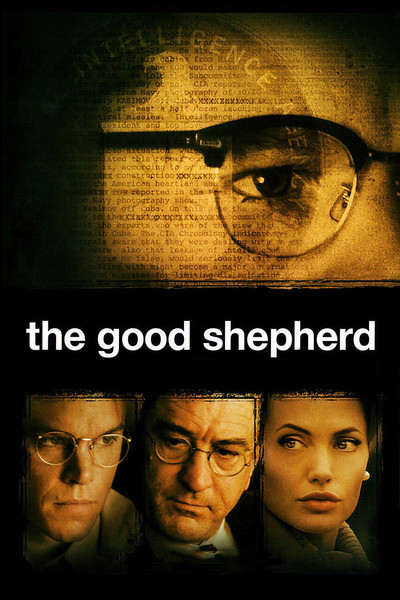 Rated R for some violence, sexuality and language