Hot Tickets: "Lovelace" and "Before Midnight"

Despite its smutty subject matter, "Lovelace" is an extremely old-fashioned piece of filmmaking -- even Bob Fosse's "Star 80," similarly themed and made three decades ago, seems more adventurous in comparison. The movie follows the usual pattern of rise, fall and redemption -- complete with a black and white picture of real-life Lovelace in the final frame, positioning the whole thing as a tribute of sorts. Its main character's transformation from a "paragon of sexual revolution" to an anti-porn activist is barely touched upon: we don't see the change itself, only its results in the last five minutes, slapped on as a fig leaf. 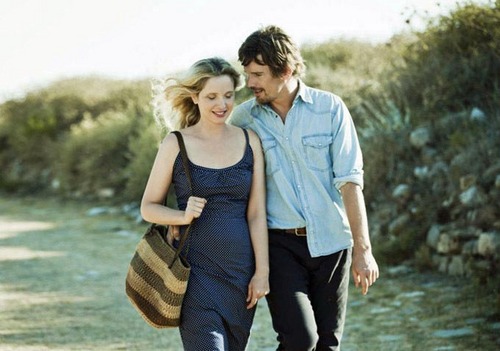 At the other end of emotional spectrum here at Park City, we find Richard Linklater's "Before Midnight," a Sundance darling and the third installment in a cycle that offers a continuing record of lives we revisit every few years (not unlike Michael Apted's "Up" series). The latest film is a comedy of non-conjugal bliss and strife, set in Greece and examining the ways in which Jesse (Ethan Hawke) and Celine (Julie Delpy) -- who met in Vienna ("Before Sunrise," 1995) and rekindled their relationship in Paris ("Before Sunset," 2004) -- try to remain in love. As in the previous two pictures, long conversations dominate and physical action hardly amounts to anything besides strolling around.

Co-written by its stars and firmly focused on reinforcing their screen personas, "Before Midnight" plays almost like a documentary about its own making, since it's not hard to imagine Hawke and Delpy having equally extensive discussions themselves. And yet, unlike such unassuming, talk-centered films as "My Dinner with Andre" (or the collected work of Eric Rohmer), Linklater's cycle is directed with one eye fixed on the audience. The exchanges are never less then brilliant, the jokes pop out with unmatched speed and there are no dead silences. Small wonder, then, that Jesse and Celine's conversations don't feel like real life at all. The script is as stylized as that of any classic screwball comedy -- only the zany antics are missing. (Whatever folly the characters allow themselves, it's purely intellectual.)

This is not meant as a knock. Despite an annoying speed bump in the form of one dinner table conversation that goes on forever, I found "Before Midnight" to be very enjoyable and compelling. The film's magnificent third movement, taking the characters as close to bitter Bergman's territory as they are ever likely to get, is simply great. Delpy and Hawke milk the fact that we all remember their younger selves playing the same characters, and Linklater is astute enough to include a 15-minute-long topless stretch for Delpy, thus making this installment the most frank in terms of showing the actors' slowly aging bodies.

Ultimately, just as the time-obsessed titles of the cycle indicate, the "Before..." series is all about aging: the minutes, hours, years and decades that somehow slip away, leaving marks on our bodies and psyches. At one point in the new movie, Jesse and Celine predict they'll spend 56 more years together. Hopefully Linklater will stick around to allow us to check in on them every now and then.