There are, I have been told, 17 scenes of explicit sex in the movie “Deep Throat.” I did not count them myself, I saw the movie, but I forgot to start counting until too late. Harold, who is a bartender in the Old Town area, counted them on Friday afternoon, and we will have to take his word. Harold is not often mistaken in these matters. He has a keen eye and a good memory.

Harold had just finished counting the 17 scenes on Friday afternoon when seven marked squad cars and four unmarked squad cars pulled up on Armitage in from of the Town Theater, which is showing “Deep Throat.” This concentration of law enforcement vehicles created a gapers’ block in both directions on Armitage, and also slowed traffic on Clark St. and Lincoln Ave.

I am not quite sure why such a massive hit force was necessary; smaller numbers of officers have successfully flushed killers from attics and directed the traffic at Soldier Field after a Bears game. No matter. They blew the whistle, and most of the patrons of the theater left quietly, keeping their hat brims low and their collars turned up, for it was a chilly afternoon.

The police, alas, neglected to obtain the necessary papers before making their raid, and so a federal judged ruled on Saturday that the Town could continue to show “Deep Throat.” I exercised my constitutional right to see the movie on Sunday afternoon, and felt only a little twinge of nostalgia as I entered the theater. In its balmier days, the Town showed Orson Welles’ “Falstaff,” Luis Bunuel’s “The Exterminating Angel,” and Babette (48-24-36) Bardot’s strip-tease pantomime to “Melancholy Baby” - all three works of art superior, I would say, to “Deep Throat.”

The movie became “pornographic chic” in New York before it was busted. Mike Nichols told Truman Capote he shouldn’t miss it, and then the word just sort of got around: This is the first stag film to see with a date. There were a lot of couples in the audience Sunday afternoon. Most of them, I thought, left the theater looking a little grim.

It is all very well and good for Linda Lovelace, the star of the movie, to advocate sexual freedom; but the energy she brings to her role is less awesome than discouraging. If you have to work this hard at sexual freedom, maybe it isn’t worth the effort.

Anyway, to continue our consumer’s report, the 17 scenes take place in a movie 62 minutes long. Allowing for the six minutes devoted to Linda Lovelace driving around Miami while the credits roll past, and taking out the swimming pool scene, the fireworks and the launching at Cape Kennedy, this leaves an average of 2.9 minutes per act, which is considerably less than Xaviera Hollander is recommending these days in her Penthouse column.

On the other hand, the cost is only 33.6 cents per sex scene, while you have to put six quarters in the machine to see a whole movie in the arcades on South State St. Sounds like a bargain until you realize that if “Gone with the Wind” were exhibited at the same cost-per-minute as “Deep Throat,” It would cost you $36.72 for tickets for yourself and your date. 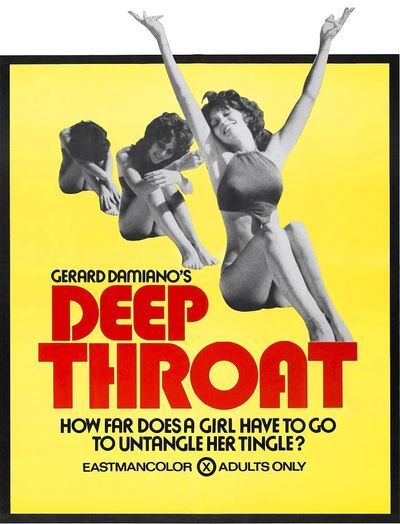