The Disney mystique is a secular religion so global, powerful and self-contained -- not to mention litigious -- that it practically courts desecration. Randy Moore's "Escape from Tomorrow," which just premiered at Sundance and is unlikely to come to a theater near you any time soon, is the boldest act of cinematic violation at least since the "Mickey Mouse Club" finale of Stanley Kubrick's "Full Metal Jacket" (in which scores of American soldiers in Vietnam adopted the show's anthem as a deranged battle cry).

Shot guerilla-style almost entirely at Disney World in Florida, Moore's film offers an immersion into the alternative reality of constant amusement. Having visited Disney World myself a mere week before arriving in Park City, I was struck by how astutely the director rendered the sheer strangeness of the place. From the opening shots of Big Thunder Mountain Railroad, scored to sweeping, melancholy music, the film sets to render the ubiquitous "magic" unfamiliar and weird -- and it certainly helps that it's shot in black and white, with many instances of quaint rear projection.

Taking its cue from the ultimate Disney promise of "dreams coming true," the film then becomes a realization of a parental nightmare. As the freshly laid-off Jim (Ray Abramsohn) takes his wife and kids for a theme park weekend, the world (or World) around him starts to disintegrate. Obsessed with a couple of sexy French tourists (or are they "cast members"?), Jim gets caught up in the dark underside of the surrounding kingdom. The repressed returns, with a vengeance: the Epcot dome blows up, fairies turn into whores, and as Jim is Soarin' along with the park's most spectacular ride, shots of naked babes get superimposed over luscious California vistas. 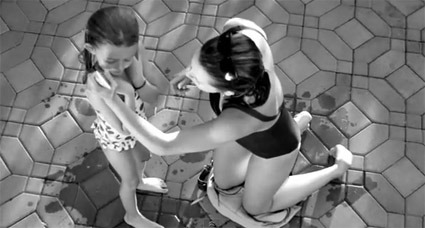 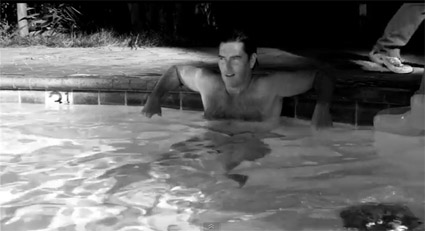 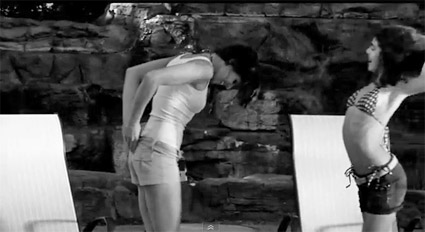 Whatever its shortcomings (and it could use some condensing), one simply has to admire the film's effrontery. Unlike Jia Zhang Ke's "The World," which turned a Beijing theme park into a hollow setting of everyday sadness, "Escape from Tomorrow" is a fun paranoia ride, shot in a style reminiscent of Tom Schiller's long-shelved "Nothing Lasts Forever" (and quite likely to share its fate). It's too early to say, given all the positive buzz at Sundance, but it seems no movie that uses a miniature Epcot dome as an interrogation device (nor one that equals Disney enchantment with a bad case of cat flu) can get a pass from Tinker Bell. 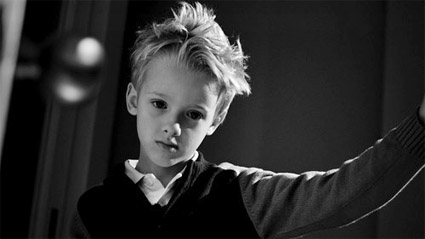 Ultimately, the film is about the terror of ubiquitous entertainment. "You can't be happy all the time," says a Lucifer-like rebellious princess after inadvertently hugging a tot to death. Given Disney's stress on happiness and smile, this may be Moore's ultimate, unforgivable heresy. Whoever visited the Great Laughing Place (as Uncle Remus would have called it), can testify to a strange phenomenon: as much fun as it is, whenever Disney magic breaks and glitches, it quickly becomes unbearable.

When Odie Henderson and me -- my Disney World companion and enabler, not to mention excellent contributor to this website --got stuck in the middle of Toy Story Midway Mania!, the looped synthesized version of "You've Got a Friend in Me" and Woody's placating message got under our skin in a matter of minutes. By the end of the ride we were tempted to shout back at the song: "The hell you do!" It's around that rebellious impulse that "Escape from Tomorrow" has been constructed.