The 67th Festival de Cannes is soon to end, and "Clouds of Sils Maria" by French director Olivier Assayas ("Something in the Air," "Irma Vep"), the final film to be presented in competition, had its press screening this morning. One of the myths of the festival is that many of the 4,500 accredited journalists will clear out well before the last day, but this was hardly the case this year. The Grande Theatre Lumiere was crowded as usual, and tempers were running high.

"I wanted to machine-gun everyone at that party last night," confided the man sitting in front of me to his companion, as I overheard the details of a soiree involving "models, Euro-trash, and has-been stars." The woman in the seat next to me, a critic for a major magazine, gave a hard elbow-jab to the guy who just trampled her feet as he tried to push his way to a seat down the row. When he didn’t move she jabbed him again with a hook to the stomach. He grabbed her roughly by the shoulders and uttered a sarcastic "Sorry," before moving on. C’est Cannes!

"Clouds of Sils Maria" has an elusive shape-shifting plot with an undercurrent of violence, but it’s a violence of the emotional sort; a bruising of the ego under the hard blows of time and aging. There are some superficial parallels with Cronenberg’s "Maps to the Stars," presented earlier in the festival, in that this is a film that is also set in the world of filmmaking: the inner sanctum of all-purpose personal assistants; of scripts, paparazzi, professional rivalries, and the burden of fame. 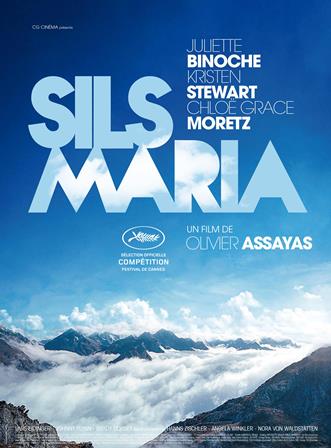 Juliette Binoche plays Maria Enders, a forty-year-old film actress who is offered a role in a stage revival of the play that made her a major star at the age of twenty. The script is the story of a manipulative young beauty who seduces her employer into a destructive lesbian affair. Maria balks at the prospect of playing the older woman when her interpretation of the younger is regarded as one of the cornerstones of her career.

Assayas constructs the story through many layers of relationships that reflect each other or are pulled back like curtains to reveal new variations.  Maria’s American personal assistant Val (Kristen Stewart) becomes a primary character, but not before Assayas constructs some feints along the way involving Maria’s complicated past with the author who was her mentor, and her conflicted present involving a former male co-star, an unseen soon-to-be-ex-husband, and the film director who offers her the new role.

At the center of the film is a two-person drama in which Maria and Val are secluded in a remote Alpine villa where Maria, still full of doubts, prepares the role of the older woman with Val doing the line readings of the vital young upstart. It soon becomes unclear whether they are acting the play or playing at real life. The duality works at times and stands out in its excessive contrivance at others. Binoche and Stewart project the kind of rapport that makes scenes in which they fall into drunken laughter and horseplay quite engaging.

The third-act conflict involves Maria’s eventual meeting with Joann Ellis (Chloe Grace Moretz), the hot young American star who is cast as the play’s young seducer opposite Maria as the obsessed older lover. Joann is styled as smart but coy paparazzi-bait with a Lindsay Lohan-like reputation. Her offstage seduction of Maria is not sexual but accomplished via flattery, and Maria, falling into the trap, discovers that the future does not belong to her.

That Assayas, now far into a career as an acclaimed director, cast Binoche one of the greatest international stars of a certain generation, and a pair of young stars whose names will resonate with an entirely new audience, is it’s own statement. Commenting on the fleeting and forward-moving nature of fame and celebrity is very much part of Assayas’s intention in "Clouds of Sils Marie." Like the Maloja Snake, a rushing, enveloping Alpine cloud phenomenon that has a metaphoric meaning in the story, in the end he engulfs all the plot’s permutations with the recognition of this reality.