Street life in Cannes is all part of the big show. Fashion statements can be extreme, and eccentrics of every stripe make the whole town their runway during the film festival. Twin toddlers in matching magenta fur suits were nothing compared to the sight yesterday of a young woman showing off her ankle-length hair. Heads swiveled as she strutted down the rue d’Antibes in stilettos. This morning, a man in a motorcycle helmet and an enormous bun of dreadlocks bound up in a sling wandered among the crowds in front of the Palais, periodically emitting high-pitched shrieks and animal sounds. C’est Cannes: no one paid him any mind.

When it comes to creative eccentricity, French director Bruno Dumont (“L’il Quinquin,” “Hors Satan") has always forged his own way with a dark brand of mysticism deeply rooted in nature, and a violent sensuality that justifies urges and actions that come directly from an ancient connection to the land. He is not known for either comedy or high-flying fantasy. That makes his competition slapstick comedy “Slack Bay” something of a surprise, not so much because it’s a radical departure for him, but because, in actual fact, it so very much isn’t.

Dumont has declared his reference points for “Slack Bay” to be Laurel & Hardy and the French silent film comedian/director Max Linder. The Laurel & Hardy angle is evident from the beginning of this superbly costumed period film set in 1910, in a reedy beachfront location outside of Calais. Two bumbling police inspectors, Machin (Didier Desprès) so hugely rotund that he looks like the Michelin Man in a suit and bowler hat, and his similarly dressed pipsqueak sidekick Malfoy (Cyril Rigaux), come snooping around the sand dunes in search of clues regarding the mysterious disappearance of tourists.

There are two resident families in this windswept location. The Bruforts, hostile and stern-faced redneck fisher folk, live in a ramshackle farmhouse just off the bay, where the father and his feral thuggish son known as Ma Loute (Brandon Lavieville) operate a very strange ferry service that involves carrying customers across the shallow bay in their arms for 20 centimes each. High above the beach in their bunker-like summer mansion, live the snooty, rich Van Peteghem family.

Going for full slapstick, writer/director Dumont has a ball with this material, and his actors, including stars Juliette Binoche (“Clouds of Sils Maria"), Valeria Bruni Tedeschi (“Latin Lover”), and Fabrice Luchini (“Bicycling with Molière") give the oddest performances of their respective careers, in roles that call for histrionics, grotesquely funny characterizations, and outright mugging. Binoche, for instance, does have her moments of playing the haughty lady, sporting a great big marabou boa around her neck, but she’s also called upon to get smacked in the face with an oar, appear in swellings and bruises with a damaged eye askew, and to go into hysterics like a shrew.

These characters are seen falling down, rolling down dunes, having fits, and limping like Frankenstein. It turns out that the Van Peteghems are seriously inbred, displaying a variety of tics, deformities, nervous conditions, and aberrations that will make them easy prey for the cannibal Bruforts, except for one complication. Ma Loute falls in love with beautiful teenage Billie (Raph), the cross-dressing son of Aude Van Peteghem (Binoche), not guessing his/her secret.

Just when it seems that “Slack Bay” is all foolish fun, things get much darker. A pilgrimage to the shrine of Our Lady of the Waves on the beach is followed by an ecstatic levitation, the first of several involving more than one character.  Hunger gets the better of the Brufort family, and Ma Loute discovers he’s been tricked. The Van Peteghem family secrets become more explicit.

Somehow Dumont has sneakily managed to have things both ways. Fans of his work will recognize the familiar metaphysical strains erupting in a new guise. The violence, while brief and played for laughs, is nonetheless brutal and creepy, as it typically is in his films. It’s not everyone’s brand of comedy by a long shot, but “Slack Bay” is likely to be recognized as one of the more truly original films screening this year at Cannes. 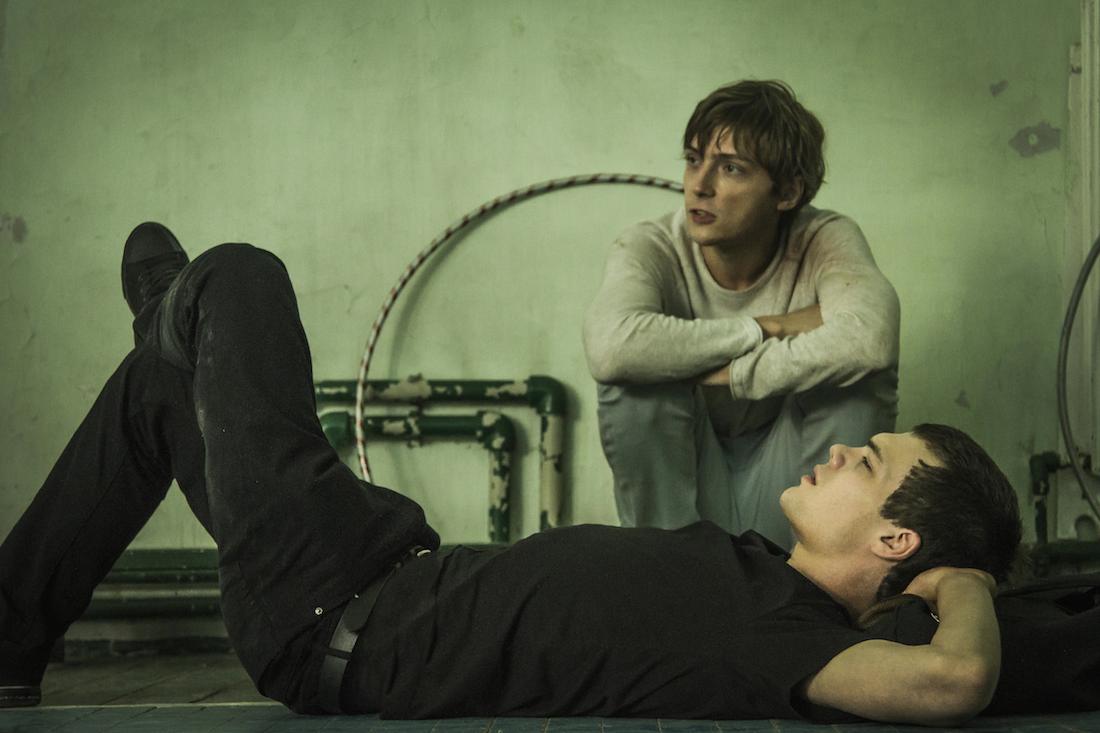 Being radically out of step with others is a theme at the heart of the “The Student” by Russian director Kirill Serebrennikov, having its world premiere in Un Certain Regard today. This story of a high school student who develops a radical commitment to his own self-devised form of fundamentalist Christianity often falters in tone, and makes an open-ended conclusion seem like a cop-out rather than a question mark.

The trouble starts when teenage Venya (Pyotr Skvortsov) refuses to put on trunks for swim class, protesting that his female classmates, all wearing bikinis, are not modestly dressed. He trashes his bedroom and turns it into the equivalent of a monk’s cell while his worried, overworked single mother weeps. He begins to carry a dog-eared Bible to class, quoting passages that suit whatever purpose he has at hand. Disrupting a sex education class, he shouts scripture and completely strips, as Elena (Viktoria Isakova), the school’s humanist biology teacher, is discussing safe sex while passing out carrots and condoms for a demonstration.

Venya is conceived as narrow-minded, humorless, bigoted, homophobic and anti-Semitic, so there’s not much to like about this character. It’s a one-note performance in which he never varies in his role as stern avenger and evangelist. He attracts only one follower, Grisha, a much-bullied lame student who has a crush on him. The teacher Elena becomes his nemesis, as he preaches the authority of men, the subjugation of women, creationism and the beauty of being able to die for religious beliefs like the suicide bombers.

There might have been a lot to work with here had there been a wider ranging or more complex conflict. For some reason, with the exception of Elena, the adults in this story repeatedly let Venya win. Bikinis are banned, and the female students are required to wear modest maillots to swim class. The school principal nixes discussion of homosexuality or safe sex, and agrees that teaching creationism should be an option. The parish priest’s tack is to quote theological texts supporting anti-Semitism, and to praise Venya’s talent as he attempts to interest him in the seminary.

When it appears that Venya may at last be called to task by adult authorities, he turns the tables on them, making a false accusation that is instantly and inexplicably taken at face value. There is no day of reckoning for this raging evangelist, and director Serebrennikov slithers away from the job of reconciling his story. 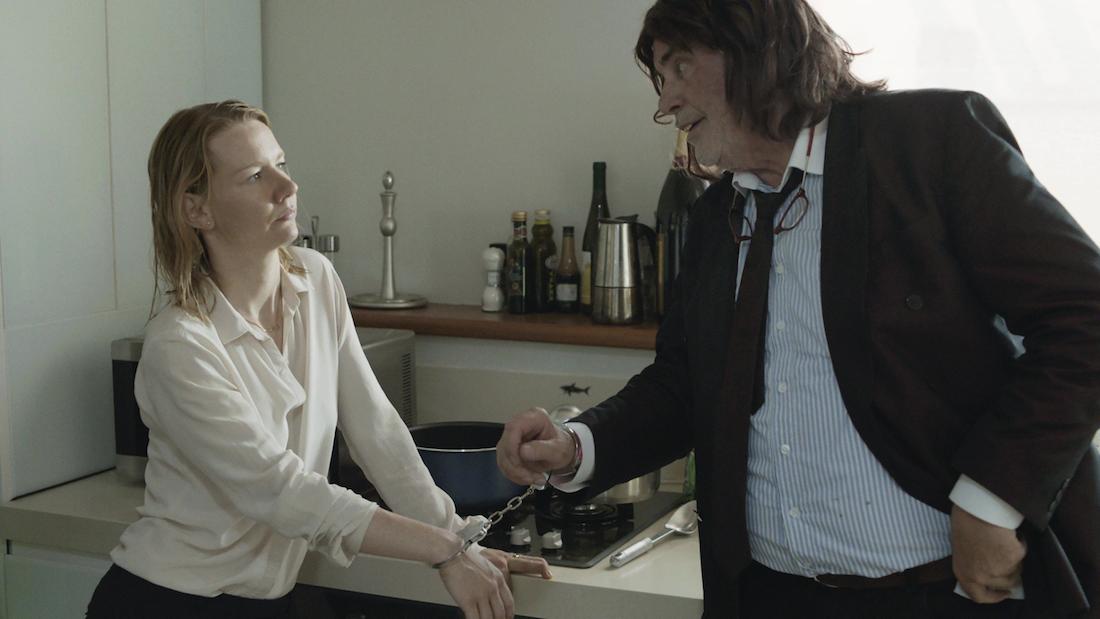 I was not looking forward to “Toni Erdmann” by German director Maren Ade, scheduled for this evening’s press screening, even though it is the first of only three by women selected for the competition. For a start, it’s almost three hours long. The press kit verbiage made it sound like a self-indulgent dud based on some aspect of the director’s relationship with her father. I figured that I could check it out and leave after an hour. I was delighted to be proven so wrong. There’s no justice if this film doesn’t win a major prize, and count me as one who’s keeping my fingers crossed for the Palme d’Or. It’s that good.
Advertisement

“Toni Erdmann” is a hilarious, knee-slapping, crowd-pleasing comedy about the rocky relationship of an oddbll practical joker dad with his adult corporate businesswoman daughter. Over the years I’ve been coming to Cannes, I’ve never experienced an audience reaction quite like the one this film elicited. The entire Palais convulsed in laughter over and over, and the surprises just kept coming. I swear, this never, ever happens.

Winfried Conradi (Peter Simonischek) is a big bear of a man with a mop of white hair. He’s a semi-retired teacher who seems to live a 24-hour, one-man show of pranks, silly costumes, whoopee cushions and jokes. The film opens with an ice-breaker of a stunt he pulls on a deliveryman, pretending to be the brother of the package recipient, and then returning to the door as himself, but bare-chested, with handcuffs dangling from his wrist, wearing goofy trick-shop shades, and false teeth.

Daughter Ines (Sandra Hüller) is a corporate consultant: model thin, uptight, serious, perpetually on the phone, and long since weary of dad’s devil-may-care approach to life. She’s currently posted in Romania, where she’s the hardnosed key negotiator in a project that would involve outsourcing hundreds of jobs for an oil company. She’s hardworking, successful, and desperately unhappy. Dad pays her a surprise visit and it doesn’t go well. They part on lukewarm terms after only a couple days, and he presumably heads for the airport.

Dad reappears a few days later in a new guise, with a shoulder-length dark wig, false teeth, rumpled suit, and a business card that introduces him as Toni Erdmann, life coach and consultant. He looks like a brunette Gary Busey, and turns up everywhere in Ines’ business life, charming her associates, spinning stories and impressing them with the claim that he’s the executive coach to her CEO. Sometimes he introduces himself as the German ambassador. Ines can’t shake this guy, and can’t reveal who he is.

In one incident, as “ambassador” he cons his way into a family party, introducing Ines as his secretary Miss Schnuk. Spotting an electric piano, he suggests they perform a song to thank their hosts, and tricks Ines into singing Whitney Houston’s “Greatest Love of All.” Starting out hesitant but goaded by her irritation, she begins to belt it out, finally escalating to such an over-the-top virtuoso performance that not only were the fictional party guests in the film applauding, but tonight’s audience in the Palais were spontaneously applauding right along with them.

The father-daughter relationship subtly begins to change, and Ines is slowly led to rethink her life and some of her friendships. It’s tempting to reveal the film's funniest bits, but the element of the unexpected is one of its most satisfying aspects. I will hint that Ines eventually throws a one-of-a-kind, corporate team-building party in her Bucharest apartment, and a furry suit and a very special dress code are involved.