A small front page item in today’s issue of Screen Daily revealed that a group of women in their fifties were turned away from the red carpet screening of “Carol” in the Festival Palais, because they were not wearing high heels. I checked my copy of the festival handbook, and it states that dress code for the red carpet is “black tie or dinner dress.” Maybe they should amend that with diagrams of acceptable heel heights for women.

The Screen Daily piece went on with: “Multiple guests, some with medical conditions, were denied access for wearing rhinestone flats.“ Thanks, Festival du Cannes, for clarifying that a black tie ensemble isn’t complete without stilettos, even if you’re disabled. Glad to know the festival has their priorities straight when it comes to women.

Kate (Emily Blunt), an FBI agent, is the central character in Denis Villeneuve’s savagely violent action film and competition entry “Sicario,” but she functions more like the caboose on this action express. Canadian Villeneuve, whose “Incendies” and “Prisoners” were both nominated for Oscars, has already proven that he is far too smart a director to make a morally simplistic good guys vs. bad guys film. There are in fact, no good guys in “Sicario,” only men compromised on a sliding scale of grey by the international drug trade.

Heading a kidnap-recovery unit of law enforcement on the U.S.-Mexican border, Kate leads a raid on a booby-trapped Arizona drug house and loses two agents in a horrific scenario that involves the discovery of the bodies of forty-two mutilated kidnap victims, the work of drug smugglers. In the aftermath, she accepts a request to join a vaguely defined multi-agency operation against the cartels, for which the immediate mission remains hazy.

Villeneuve initially sets all the conventions of the action movie in motion, including the obligatory display of massive weaponry and high-tech gear as this new enforcement team makes a foray into Juarez in armed convoy, to apprehend the brother of a drug lord. There is the surprise element of the initial bloody high-risk shootout, but that’s just a party favor in this story. Ominous music pounds to the beat of helicopter blades, gunshots and explosions erupt. Kate is the puzzled fifth wheel.

“Listen! Learn!,” shouts a swaggering, smirking Matt Graver (Josh Brolin), the nominal director of an operation that includes a mysterious Mexican colleague, sleepy-eyed taciturn Alejandro (Benicio Del Toro). Equally mysterious is the presence of the sole woman in this atmosphere heavy with testosterone. Unknowingly, she’s both a pawn and a decoy. Symbolically, Villeneuve positions Kate as the film’s moral center, and at the same time cynically renders her impotent in the role. Within the structure of his very dark nihilist plot, all morality is negated. 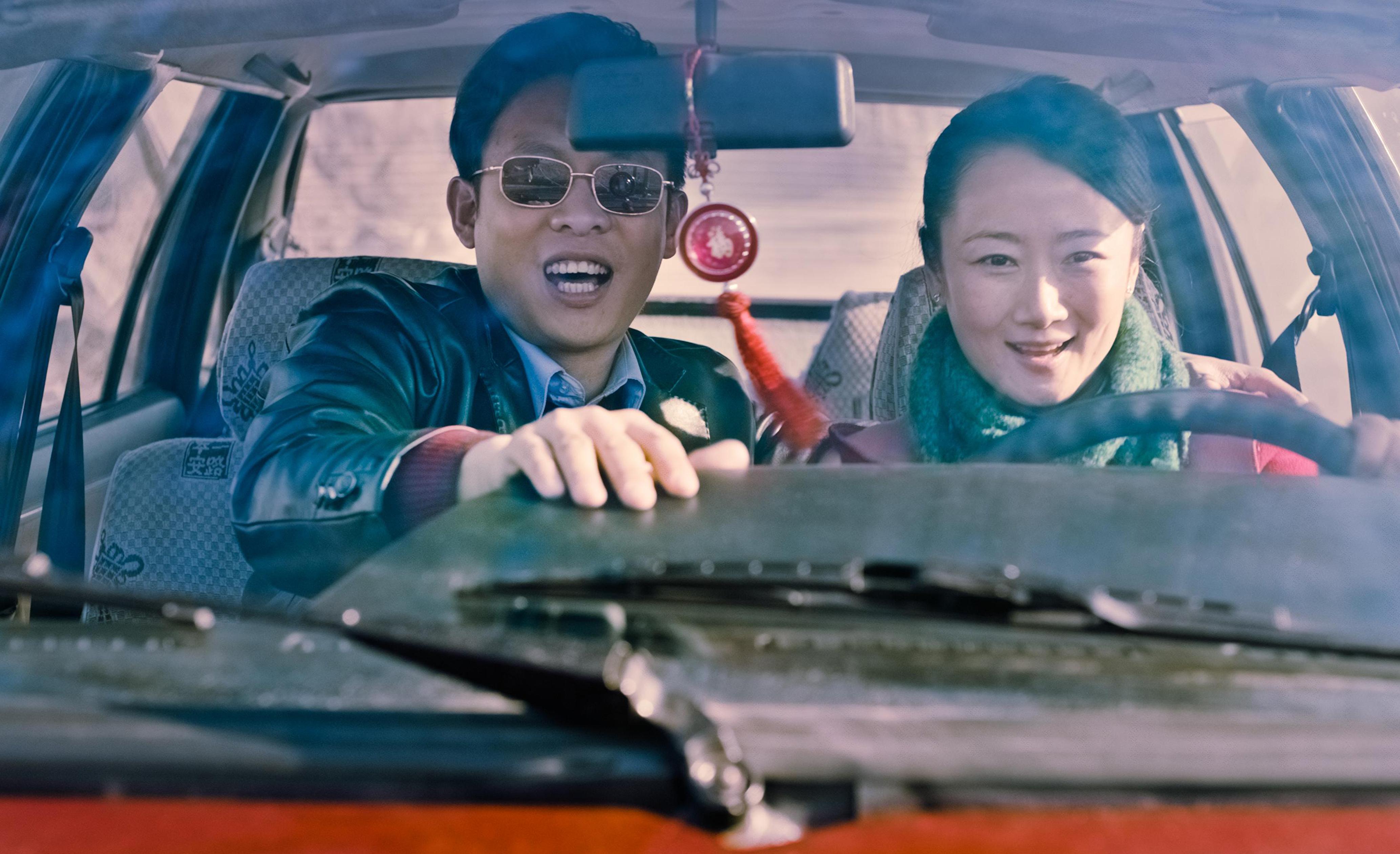 In "Mountains May Depart,” Jia Zhang-ke’s competition film, a woman’s choice of one suitor over another is meant to be the catalyst that changes the course of life for three people over the next twenty-five years. Jia, director of “Touch of Sin,” “Still Life,” and “The World,” has a fine eye for incongruous kitsch, as well as a great observational talent for depicting street life.

No one evokes the power of landscape better, or creates more of a bond between characters and their environment. When “Mountains May Depart” opened with an amateur dance show to the Pet Shop Boys number “Go West” and then moved into the streets of a small town for a Chinese New Year celebration, the film’s prospects looked promising. It soon became evident that it is more of a failed experiment so unorthodox in approach that a technical problem in the projection was assumed by much of the audience to be part of the film.

“Mountains May Depart” is in three parts, and Jia utilizes a different screen aspect ratio for each. The first part, set in 1999, is in the almost square 1.37 ratio. Young teacher Tao (Zhao Tao) is pursued by reserved, thoughtful Liang, who works as a coal miner, and with whom she appears to have an easy synergy. Tao’s head is soon turned by their flashy, ruthlessly ambitious friend Jinsheng (Zhang Yi). He buys the coal mine and marries her.

This first part waivers between drama and the kind of low-key satire that has characterized some of Jia’s other work. His use of the square frame gives the impression that the story is on the verge of bursting at the seams, that there is much more to be seen just beyond the edge of each frame. Part one concludes with the birth of Tao’s son, whom Jinsheng proudly names Dollar.

The middle section, set in 2014, is in the much wider 1:85 aspect ratio, and has an air of family melodrama. This part is primarily Tao’s story as a divorced woman. Liang returns to town after a long absence, bringing his wife and small child, but also sick with cancer. As the screen space has become wider, the story becomes smaller and less focused in its direction. Tao’s son, now seven years old, barely knows her, and will immigrate to Australia with his father and stepmother.

In part three, set in 2025 Australia, and in the 2:35 widescreen aspect ratio, “Mountains May Depart” falls into ludicrous disarray. Characters from the previous strains of the story are dropped. This becomes Dollar’s story, with cringe-worthy acting, dialogue in English, and a go-figure plot in which nineteen year-old Dollar becomes romantically involved with a sixty year-old woman (veteran Hong Kong actress Sylvia Chang).

There is no chemistry among the cast, even in the early part, and the casting of lightweight actors dooms the narrative to superficiality. There are moments when Jia works to his strengths, which makes it all the more frustrating that he has attempted a form of storytelling so out of the range of his best talents.