The tension is palpable as the Cannes awards are soon to be announced! I don’t mean the Palme d’Or, folks, but the prestigious Palme de Whiskers, my just-for fun award for the Cannes festival’s Best Feline Performance. The most glittering soiree on the international feline social calendar is about to begin in the Palais de Kittycats along the legendary Croisette on the Cannes waterfront. In a special new feature, the lighting for the Palais will be provided through the efforts of thousands of mice running on wheels, a performance piece created at great expense.

Vogue is covering it once again, and Vogue film critic John Powers and novelist/screenwriter Sandi Tan send their amiable Chubs, plus impeccably groomed Nico, a sleek Siamese, to serve on the jury. “I don’t wear any fur but my own,” she repeats with a nose-in-the-air sniff. “I think that line is getting stale, you vain catty thing,” chortles Chubs, a delightfully speckled grey tabby, “That’s what you told the press last year.”

Joining the Palme de Whiskers jury for the first time this year is Bob, a remarkably fit middle-aged tomcat in a classic mackerel coat. Bob represents New York Times film critic Manohla Dargis, who had to shush the throaty jealous growls of Bob’s housemates Bill and Henry when they found out he was on the international jury.

In this year of a Coen brothers-headed jury for the Palme d’Or, it was only fitting that Tigger, Daryl, and Jerry, the three identical marmalade tabbies who took turns playing Ulysses in “Inside Llewyn Davis” join the jury too. Being former shelter cats, they are a little rough around the edges in the manners department despite their stardom. Bob looks askance when they start grooming each other in the middle of jury proceedings.

Coming all the way from Switzerland to head the Palme de Whiskers jury as a team are brother cats Jean and Luc, winners of the very first Palme de Whiskers for Godard’s “Film Socialisme” back in 2010. They were just a pair of cute grey-and-white kittens then, and now they’re all grown up but they still have those chirpy voices.

“They seem a bit under the weather,” whispers Nico. “How would you feel if you had to watch Jean-Luc Godard pander to that dog, who was such a scene stealer in ‘Goodbye to Language’” retorts Tigger. “They had to watch his disgusting drooling tongue in 3-D!”

Let’s take a look behind the scenes at the secret jury deliberations in a back room of the Palais de Kittycats. In the first order of business the assembled cats mount a howl of protest over the fact that there was a shocking lack of feline representation in the 2015 competition. Noting a similar underrepresentation of films directed by human females, the jury cats voted to express solidarity. With a chorus of snarls and hisses, they symbolically shred a photo of the festival artistic director with their claws.

Ensemble performances and walk-on parts seemed to rule this year, and the jury was not pleased. There were the two ginger kittens and an adult black cat tussling on a lap in “The Restless One,” the first part in the Miguel Gomes trilogy “Arabian Nights.” “Too slight,” say the Ulysses trio in chorus. Being the ensemble performance experts, the three also gave a paws-down to the animated cats of “Inside Out,” entertaining as they were. “Those were just virtual cats,” spits Jerry. A resounding no also to the walk-on role of two scruffy street cats in Natalie Portman’s “A Tale of Love and Darkness.” “Those poor things…that wasn’t acting,” says Darryl. Another no to the calico cat who runs into the bushes in Shin Su-won’s “Madonna.” 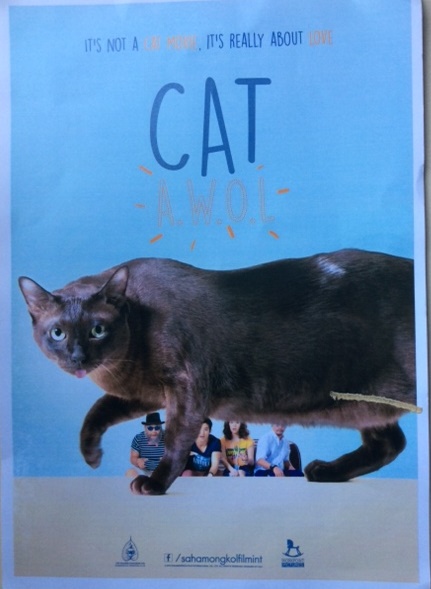 The jury was desperate enough to even take a look at a trailer for “Cat AWOL,” an obscure Thai romantic comedy for sale in the film market. The big black tomcat Johnny was the star, for sure, but he was clearly a non-professional. Humans were holding him down as he tried to struggle out of his ninja costume, and it didn’t look like that part was in the script.

Chubs suggested that this year’s best cat line in a movie was in Valerie Donzelli’s “Marguerite & Julien.” “The cat,” responds the pregnant heroine, when asked who fathered her child, since she hadn’t seen her husband in eleven months. Leave it to Bill to dismiss the proposal with a wave of his great white paw, reminding the jury that “Marguerite & Julien” stank worse than a week-old litter box.

And on it went until the magic hour when the world’s most beautiful cats began filing into the Palais de Kittycats in their glossiest coats and most extravagant collars. The more daring lady cats, my own Miss Kitty among them, didn’t even wear collars. As Miss Kitty, the mistress of ceremonies, jumps to the stage, the ceremony begins.

The jury is seated onstage in a row of cushy baskets with a crystal water bowl in front of each one. Jury co-presidents Jean and Luc open the envelope. The ears of many in the audience are laid back, tails are swishing, and shocked hisses are heard as the winner of this year’s Palme de Whiskers is announced as Stripey, the big caged tiger in Jia Zhang-ke’s “Mountains May Depart.” What an upset!  Sure, it was a fine, intelligent performance involving some playful paw batting, but a tiger?

Stripey couldn’t make it from China in time for the ceremony, and besides, the jury was a little afraid he’d try to eat some of the audience. Accepting on his behalf is last year’s winner Dac, the shining black tomcat from Asia Argento’s “Misunderstood.” A big hulking guy, Dac was clearly enjoying the opportunity to strut his stuff before the lady cats once more. There were whispers that he seems to have let himself go in the past year, looking less like the Brad Pitt of cats than the Gerard Depardieu of cats.

Just as chaos threatened to break out in a rush to the tuna buffet, Miss Kitty announced that the jury had created a new award. Jean and Luc padded back up to the microphone to announce that the first ever Kittycat Peace Prize would go to Dali, the little orange and white adolescent from Dalibor Matanic’s “The High Sun.” It wasn’t much of a part, but the jury felt that the appearance of a cat in a film about reconciliation after war was a good sign. Leaping gracefully to the stage, Dali, a little farm girl kitty, won everyone’s hearts with a shy mewing acceptance speech.

The satisfied purrs continued until dawn in the still brightly lit Palais de Kittycats. The jury regrets that no mice were harmed.