A Critic Sat In a Dark Theater, Reflecting on Ebertfest

Four years ago, I sat in the front row of the Virginia Theater, peering over my shoulder to look at Roger Ebert. It was an overcast Sunday afternoon in Champaign, Illinois, and the festival had just concluded with a showing of ​“Citizen Kane” ​accompanied by Roger's audio commentary. In retrospect, it was a fitting selection as Roger's last movie with the people of Ebertfest, once more opening our eyes to the wonders of cinema in real time, as his writing often does. After the festivities had wrapped, a line formed inside the theater. Festival attendees wanted their books signed while they said their goodbyes to Roger, who was sitting in his rugged, brown chair, smiling. "Until next year Roger and Chaz," peopled ecstatically said, unaware of what the next 12 months would hold. 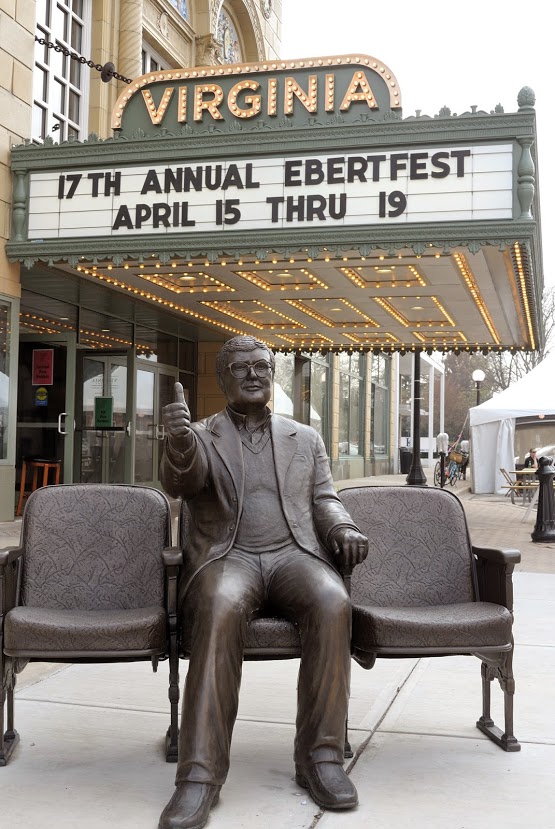 For more than 30-minutes I nervously circled the Virginia, attempting to muster up the courage to say “hello” to Roger. When I retreated to my seat, frustrated with the anxiety that had bubbled up, my father refused to leave. "Why do you think we came here? You have to do this," he insisted. And he was right, I ​had ​to say something to the man who had irrevocably changed my life in ways that I could not yet fully comprehend. After the umpteenth trip to the washroom, repeatedly splashing water onto my face, I said something to Roger and Chaz. As he signed my copy of ​"Life Itself", ​I forked over my shoddily designed business card with a note inscribed on the back:

Although you are no longer able to speak, your voice will live on forever.

My life would never be the same.

Jump ahead to 2015 and Ebertfest continues to be a film-crazed enclave. There are many reasons its legacy continues to endure, but none are more important than the festivals's inhabitants. While most film festivals are circuses, fueled by the buying and selling of art, Ebertfest is a reunion. At the same time every year, thousands of people from around the world gather in a lavish movie palace from the roaring '20s to be dazzled. But it's not merely the moving pictures that do the dazzling, it's the people around them.

For five serene days a surrogate family is given time to reconnect. Phones are silenced and brightly lit screens are dimmed as people break free from their daily routines. There are no publicists haranguing journalists, and vice versa. There are no studios looking to forge a deal. There are no actors or actresses attempting to ​make it at this festival. If your piece of art has been invited to Ebertfest, you've already made it. I suspect there's no film festival on this continent that has a higher rate of returning attendees and special guests—and it's not because Champaign is some exotic foreign land with tropical weather, beaches, and endless sunshine. It's the people. Roger attracted folks from all walks of life, and there is perhaps no better representation of this diversity in humanity than Ebertfest. One day you're discussing the merits of “​Goodbye to Language” ​with a couple from Iowa, the next you're talking about Robert De Niro with Chazz Palminteri.

Under the most circumstances, locating the connective tissue in these spontaneous, fragmented conversations would be difficult. But the through-line is clear: Roger's voice is our shared foundation, the unifying interest that brings us together, rendering us inseparable. Pauline Kael lost it at the movies; Roger lost it at ​Mad ​magazine; and we've lost it at the Virginia Theater.

Last year I assumed the role of prognosticator at Indiewire, predicting the fate of Ebertfest without its inimitable creator. My visions of the future were cautiously optimistic. A year later my sentiments remain unchanged—despite the fact that the departure of Mary Susan Britt (the glue of the operation) coincides with our degenerating attention spans, which appear to be shrinking with each passing 140-character snippet of snark. Perhaps it's my naiveté nestling in, but after sitting in the Virginia Theatre for five days, my faith in Ebertfest has become unshakable. No matter the troubles of the present, it's clear that with Chaz at the helm, Nate Kohn behind the scenes, and an audience still interested in the movies, the festival, like Roger's work, will endure.

The balcony isn't closed, and it never will be.