After 1989's calamitous “Star Trek V: The Final Frontier,” Nicholas Meyer, director of the film franchise’s best entry “Star Trek II: The Wrath of Khan,” was brought in to direct "Star Trek VI: The Undiscovered Country," a fitting farewell to the Enterprise’s original crew. If "Wrath of Khan," "Star Trek III: The Search for Spock" and "Star Trek IV: The Voyage Home" are stories of death and rebirth, “The Undiscovered Country” is an honest look at what happens when the curtain is coming down, and how heroism can be found in choosing preservation of a future for the new generation rather than destruction. The film reflected the crackup of the Cold War in 1991, but it has gained a sadness in the stories we tell ourselves now and the attendant belief we have in the future. 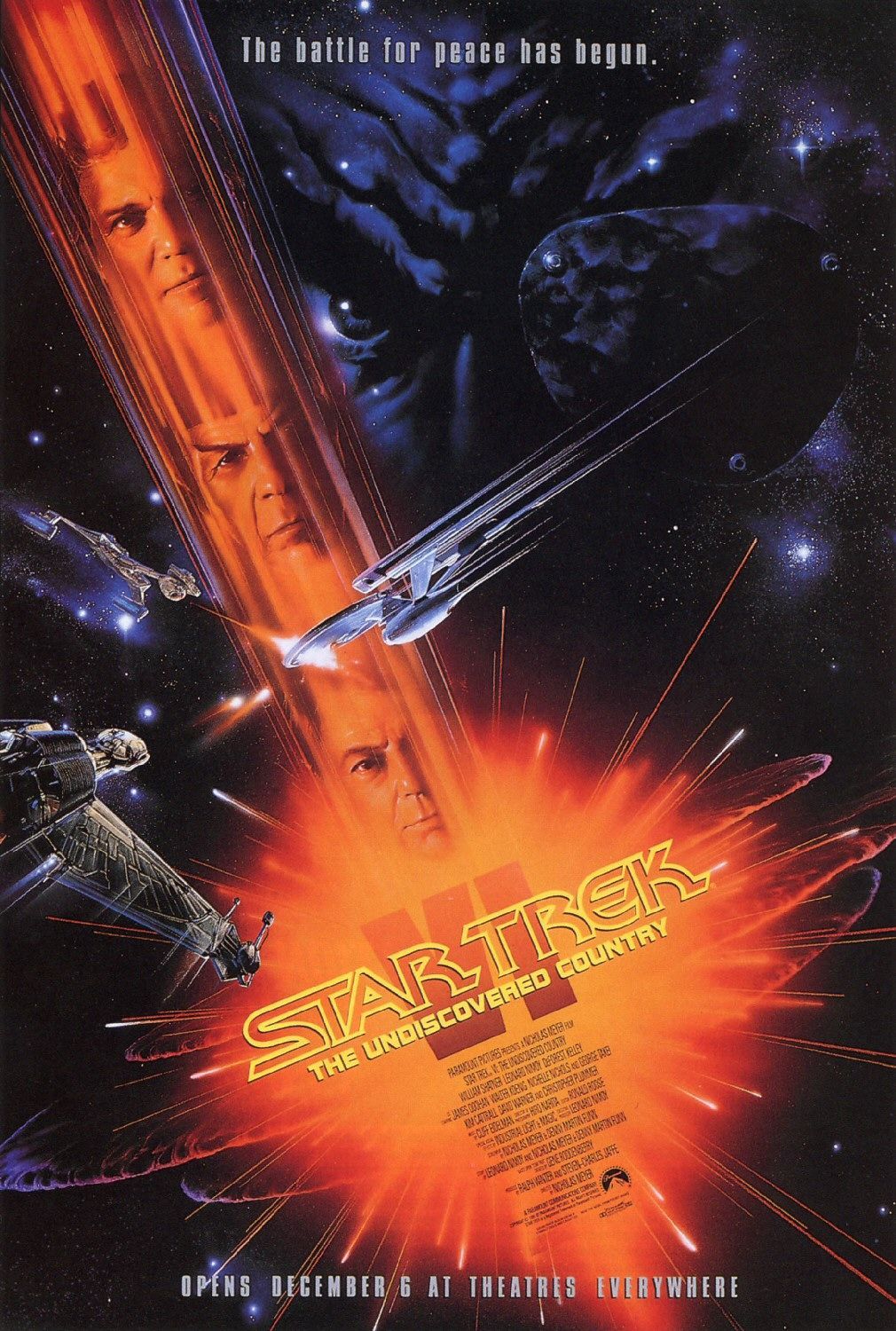 In the original crew’s send-off, we find them feeling their years and weary of the burdens of their roles on the Enterprise. They are wary of the fragile new peace with an old enemy, The Klingons: A dinner between humans and Klingons ends with the painful awkwardness of any forced attempt at political goodwill; and a bad situation becomes worse when a Klingon ambassador--amenable to the peace treaty being brokered between the Federation and The Klingon Empire--is murdered. Captain Kirk is framed for the crime. What follows is an exciting planet-hopping adventure that veers from prison break to political intrigue, as the Enterprise’s crew must stop a group of conspirators from wrecking a peace conference and plunging the various worlds back into unwinnable wars.

The film is beautiful, shot in autumnal colors; brass, deep reds and the glow of sunsets. The entire film looks like a story being told by a flickering fire: how it was, and how it may be again. Meyer gets excellent performances from his cast yet again—the core trio of William Shatner, Leonard Nimoy and DeForest Kelley playing off each other like a bunch of riffing musicians who know the others' quirks and tempo down cold. Iman has an eye catching part as Martia, a traitorous shapeshifter at the prison colony Kirk is sent to. And Christopher Plummer makes a terrific villain, looking like a fancy leather handbag in his Klingon makeup and quilted armor.

If it’s true that films reflect the time they’re made, it’s also true they gain new facets in the times they’re rewatched. If the dissolution of the Soviet Union is the seismic shift felt under “The Undiscovered Country'"s plot, the pall of Trumpism and Brexit hangs over it now. There’s something very melancholy about a sci-fi film concerning an older generation that does not wish to screw over the younger one. In a time where there’s a real meanness in the air—the snarl of “if I can’t have it all nobody can have any of it” that burns in the eyes of Trump supporters making war whoops at the mention of Elizabeth Warren’s name, the open harassment aimed at people perceived as foreign all over England—there’s something radical about the “The Undiscovered Country'"s understanding that heroism isn’t always about choosing the fight, but preventing one. That there is heroism in understanding your era is ending and then making way for the next generation. It’s the willingness to accept change and the passage of time that separates the film’s villains from its heroes. And in a summer of howling, empty cinematic apocalypses, there is something appealing in a sci-fi adventure story that is all about preventing destruction on a mass scale.

And yet the film’s coda is a sharp reminder of how our society is eager to cordon off and ignore old people. The crew is informed they are to return the Enterprise so she can be decommissioned. Spock’s reply is a tart, perfectly delivered, “I believe if I were human my reply would be ‘Go to Hell’ ... if I were human.” Kirk choosing to steer the Enterprise into one last adventure is a beautiful note to go out on. At its best, “Star Trek” is a supreme achievement of pop cultural humanism, and “The Undiscovered Country” is a still-exciting glimpse at what our future could be. But it’s now also a poignant reminder of how much we’ve lost.