"Why I'm Never Going Back to Penny Arcade Expo." For Wired, Rachel Edidin recounts how a clumsy but ultimately forgivable rape joke snowballed into a bullying "defense" by its creators, and plunged an expo into controversy. Great stuff here about the true meaning of the words "free speech" and "bullying."

"Here’s some quick context: In 2010, Penny Arcade posted a comic strip that involved a character describing being 'raped to sleep by dickwolves.' The rape joke wasn’t the point of the strip — it was an illustration of the screwed-up ethics implied by the quests in videogames like World of Warcraft, where after a player has rescued, say, five hostages or slaves, there’s no real impetus (and sometimes no mechanic) to save any of the others. Whether or not the strip was offensive isn’t really relevant at this point: More than the comic itself, what made the most impact was how Penny Arcade responded to the readers — including rape survivors — who said it upset them. First, they mocked their critics with a series of posts and a flippant non-apology. In a subsequent “make a strip” demonstration at PAX Prime, Krahulik further needled the issue by drawing a dickwolf, and Penny Arcade even monetized the discomfort over the rape joke by making and selling “Team Dickwolves” shirts and pennants."

"Batwoman writers Depart DC Comics after lesbian superhero's wedding is 'prohibited.'"  By Matilda Battersby of The Independent of London.

"DC Comics may have made history last February when an edition of its Batwoman comic included the first lesbian wedding proposal in the genre. But now the writers behind the female Caped Crusader’s adventures have acrimoniously left DC claiming the female superhero’s marriage was 'prohibited' by the publisher. In a blog post co-authors J.H Williams and W. Haden Blackman declared that they were exiting DC in December alleging they had been asked to 'alter or completely discard many long-standing storylines that we feel compromise the character and the series.' [... The co-writers say they have been told at last minute by DC to change several longstanding story arcs including “most crushingly” showing Kate and her girlfriend Maggie getting married." 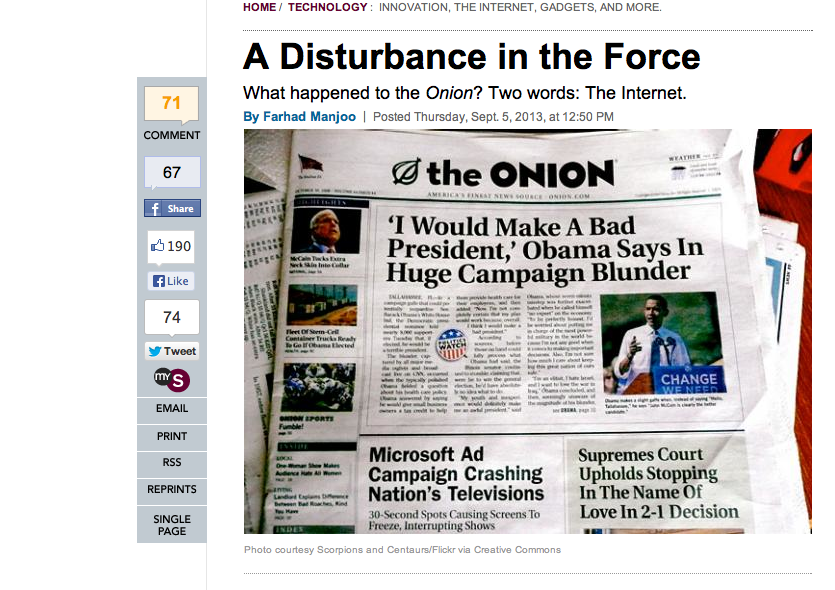 "A Disturbance in the Force: What happened to The Onion? Two words: The Internet." By Farhad Manjoo, for Slate. Or as a commenter put it, "Area man complains X isn't as good as X was back in the day."

"Overall, under the new process, everything about the Onion is bigger and faster than it was a year ago. It now publishes twice as much content as it did last year—not just fake news stories but also fake slideshows, fake news-in-briefs, fake op-eds, and fake headlines. The Onion now works just like the news organizations that it’s making fun of. In some ways, that’s part of the joke." 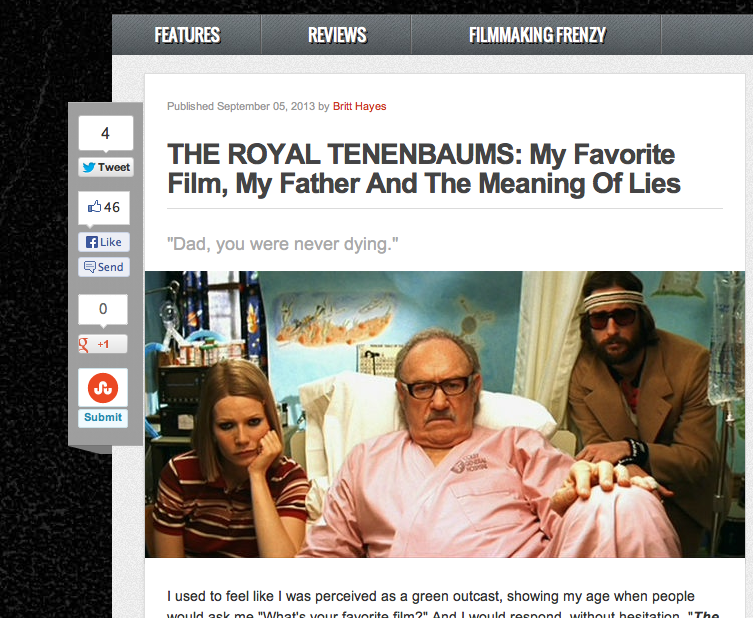 "The Royal Tenenbaums: My Favorite Film, My Father, and the Meaning of Lies."  By Britt Hayes, for Badass Digest.

"A big portion of the plot revolves around Royal pretending to have cancer so that his family will forgive him his trespasses and come back to him -- even if it's out of pity. Several months before my dad passed away, he came to me one day and told me he'd won the lottery. I was more than skeptical, of course, especially when he kept changing his story. First he'd won $12 million, then it was more like $10 million, then $9.5 million. He took me with him to look at fancy boats he wanted to buy with his new money. He told me and my sister not to tell my stepmom about the lottery win because he didn't want her trying to get the money in the divorce. Weeks went by, and he still had no money to show. We all knew he was lying, but we played along with his weird, nonsensical little show, like watching a three year-old trying to act out the large hadron collider in a game of charades." 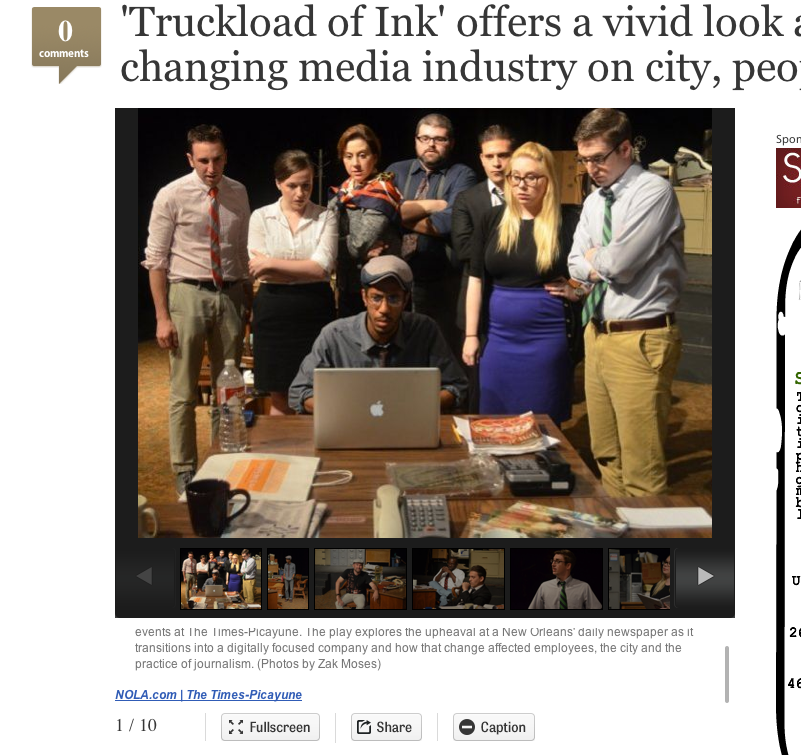 "Truckload of Ink offers a vivid look at the effects of changing media industry on cities, people." For the New Orleans Times-Picayune, Theodore P. Manhe writes about "a deeply insightful look at the newspaper, the changing face of the media industry, and its relationship with the city it covers."

"Employing one of the finest ensemble casts seen so far this year, the play doesn’t waste a single character; even in the briefest moments, each actor gets a chance to shine. With such a large cast, that would pose a problem for most playwrights and directors. Beau Bratcher directs the production with pinpoint precision. He manages to tell the story in a taut two hours, paying particular attention to the rhythms of Fitzmorris’ writing, flooding the stage with rich dialogue, overlapping lines and rat-a-tat-tat pace that captures the frenetic pace of a newsroom." 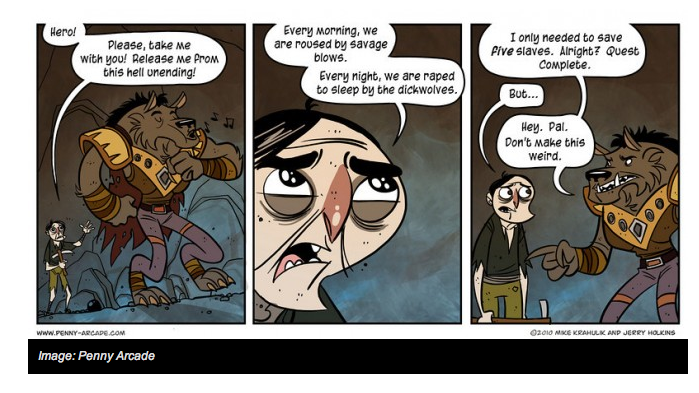 The comic strip that launched the brouhaha recounted in Thumbnail #1 (see above).

Fran Leibowitz rips New York University in this excerpt from a book launch for While We Were Sleeping: NYU and the Destruction of New York at McNally Jackson, a Soho bookstore. The video is above; for excerpts, see Foster Kamer's New York Observer story. "'I don’t love NYU,' Leibowitz told the audience. "I didn’t hate it before. I just never thought about it. It’s not of interest to me. And it really should be stopped from being called NYU, because it really has nothing to do with New York. It is suburban—to the core. Those buildings they built on the south side of Washington Square Park are giant pieces of suburban junk. They have no place in any city—even cities we hate. Even Atlanta doesn’t deserve these!"