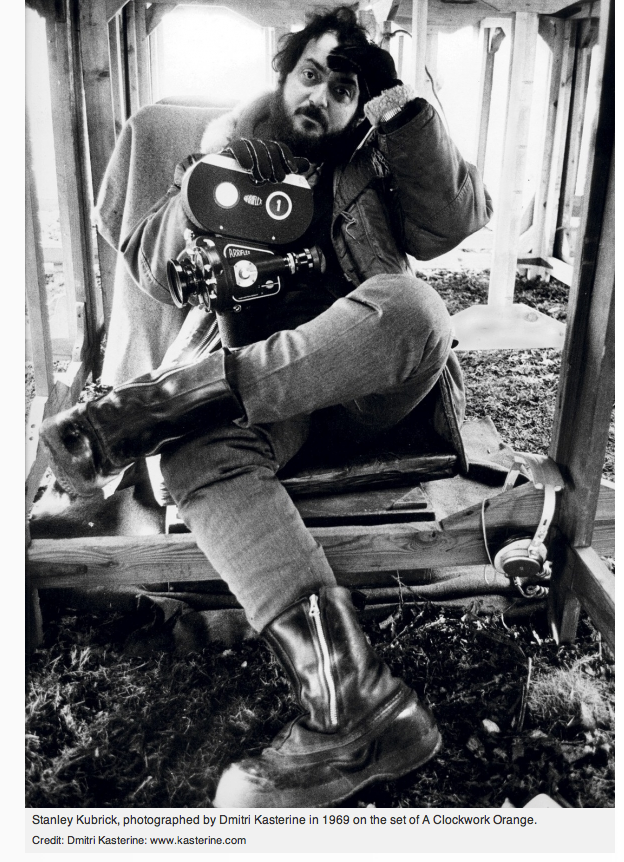 "Stanley Kubrick, cinephile." In honor of what would have been Stanley Kubrick's 85th birthday, Nick Wrigley compiles a rather astonishing list of every movie that Kubrick or people close to Kubrick said he liked. Turns out Kubrick really liked White Men Can't Jump. Related: Wrigley's interview with Kubrick's longtime right-hand man, Jan Harlan.

"I wanted to try and pull together all the verified information I could locate and have it looked over by a wise, authoritative eye. I was delighted to find Jan Harlan, Kubrick’s confidant, relieved to talk about something other than the director’s own films (there’s only so many times a man can be asked about the ending of 2001: A Space Odyssey), so I set out to try and dislodge some recollections from his memory bank. (Read the interview here.)

If you don’t find it interesting that David Lynch counts Rear Window and Sunset Blvd. among his favourite films, that Woody Allen doesn’t find Some Like It Hot at all funny, or that Kubrick loved all these filmmakers, the following is probably not going to be of much interest." 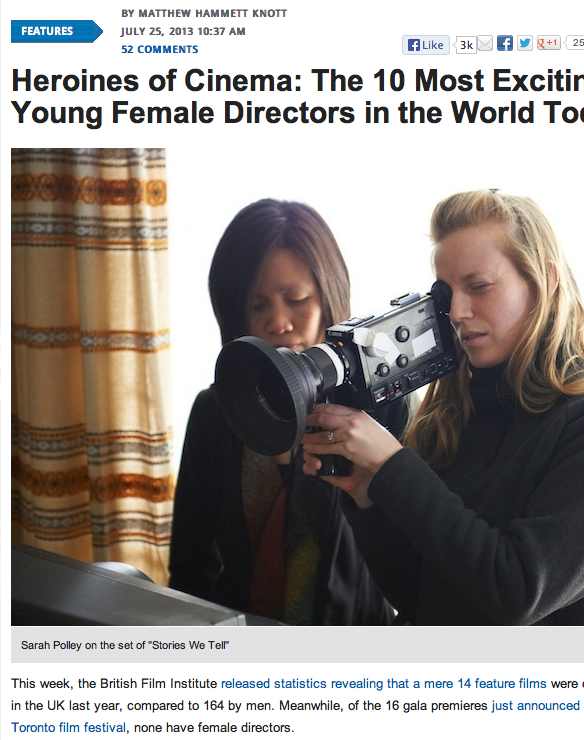 "The prejudices faced by women filmmakers - half of all film school graduates but only 5% of working Hollywood directors - have been well-documented. Those who do make it talk often of the depressing struggle they faced to get there, far longer on average than their male counterparts. It is equally common to hear of a female director whose difficulties in getting financed or produced stemmed from the personal subject matter of their work. It would seem that both of these realities are informed by the depressing strain of misogyny which judges the perspective of a young woman to be somehow lesser."

"So You Think Skyler White is a Bitch?" By Brandon Sodhi of Open Season. See also this piece from 2012 by Leigh of BitchFlick: "Yo, Bitch: Inside the Complicated Feminism of 'Breaking Bad'."    "Having read a fair amount of Skyler hate posts, one thing people seem to dislike most is her reputation of being a controlling nag. I’ve seen viewers of the show point to the 'talking pillow' scene early in season one as evidence of how she has emasculated her husband and attempts to dictate how he should live (or not live) his life. She tries to kick him out of the house once she finds out about the drug dealing. She refuses to let him buy his son an expensive car. They don’t see a helpless character, they see a character that should be more helpless. The problem here is that labeling all of this as some self-centered grasp at control is incredibly dismissive. I’d go as far as to say that all of Skyler’s actions throughout the series are done with one thing in mind: her children. 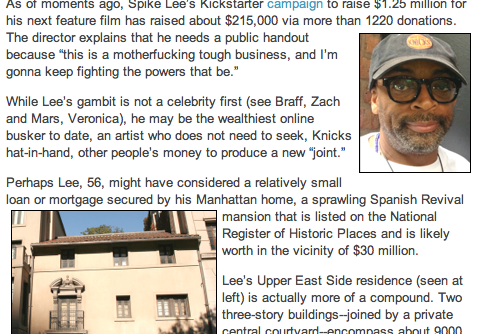 "Spike Lee, Seeking a Kickstarter Handout, Owns $30 Million Manhattan Mansion, Martha's Vineyard Estate." Aside from the racially loaded "handout" in the headline, this piece is provocative in a good way, in that it raises even more questions about film industry big shots such as Lee, Zach Braff and "Veronica Mars" creator Rob Thomas trying to crowd-fund new projects.

"While Lee’s gambit is not a celebrity first (see Braff, Zach and Mars, Veronica), he may be the wealthiest online busker to date, an artist who does not need to seek, Knicks hat-in-hand, other people’s money to produce a new 'joint.' Perhaps Lee, 56, might have considered a relatively small loan or mortgage secured by his Manhattan home, a sprawling Spanish Revival mansion that is listed on the National Register of Historic Places and is likely worth in the vicinity of $30 million. Lee’s Upper East Side residence (seen at left) is actually more of a compound. Two three-story buildings--joined by a private central courtyard--encompass about 9000 square feet of living space. In 1998, Lee and his wife purchased the 32-foot-wide property from the artist Jasper Johns for $4.75 million, according to deed records."

"Why My Parents Got Arrested in Madison." For The Progressive, reporter Rebecca Kemble describes the arrest of her parents, for the crime of singing in the rotunda of Wisconsin's State Capitol without a permit. 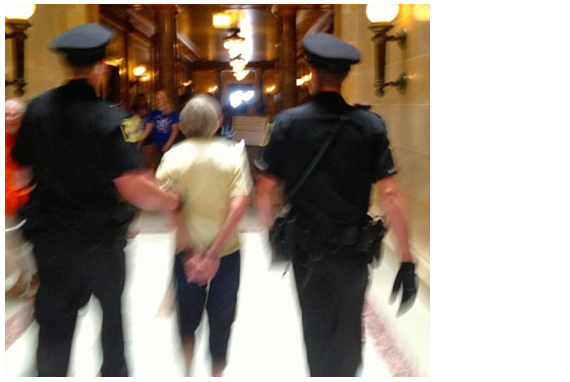 "Before they moved here, Mom thought that my description of post-2010 political conditions in Wisconsin as proto-fascist was overblown rhetoric. But over the past two years, my parents have attended numerous public hearings and legislative sessions at the capitol, where they have seen first-hand the corporate control of state government and the authoritarian use of force employed to back it up. Now Mom says, 'I know what you mean.' Yesterday both Mom and Dad felt what it means when dozens of Capitol Police, state troopers, Department of Justice criminal investigation officers, and DNR game wardens conducted a mass arrest of 22 people who were singing peacefully in the rotunda." 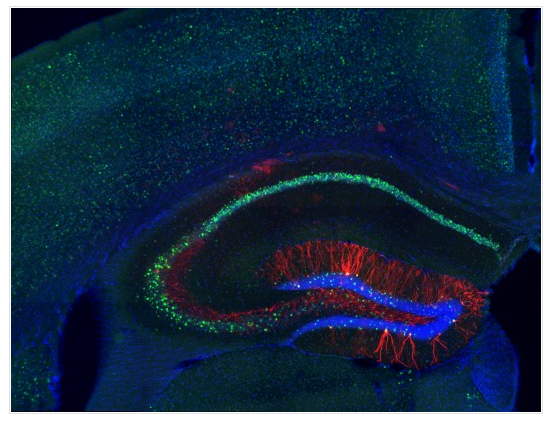 Photo by Xu Liu and Steve Ramirez for "MIT scientists implant a false memory in a mouse's brain," by Meeri Kim, for The Washington Post. Yes, you read that right ".'If mice had Hollywood, this would be ‘Inception’ for them,” said one of the lead researchers, MIT neuroscientist Steve Ramirez, whose study was published online Thursday in the journal Science."