"'Parrot Dinosaur' walked on all fours, then graduated to two." Elizabeth Barber of The Christian Science Monitor writes about evidence that the Psittacosaurus walked on four legs as a young creature, then learned to walk upright as it got older, just like people. The mind reels from imagining the possibilities if evolution had continued along these lines.

"That discovery, published in the scientific journal Nature Communications, suggests not only that individual Psittacosauruses went from four to two legs, but that the species had also evolved over time from four-legged adults to two-legged adults, adapting to environmental pressures. '

Having four-legged babies and juveniles suggests that at some time in their ancestry, both juveniles and adults were also four-legged, and Psittacosaurus and dinosaurs in general became secondarily bipedal,' said Mike Benton, a professor at the University of Bristol."

"Prison of the Mind: A Chinese Poet's Memoir of Incarceration." By Ian Buruma, for The New Yorker. About the poet Liao Yiwu's experience of incarceration and brutal torture in “For a Song and a Hundred Songs.”  Warning: This story contains many stark descriptions of cruelty perpetrated by guards against inmates at Chongqing Municipal Public Security Bureau Investigation Center. Do not read this while eating.

"Liao is a literary man, and this actually makes his prison memoir even more compelling. For one thing, he is ruthlessly candid about his weaknesses, and his fears. There is nothing especially heroic about him. Watching the guards in combat training on his first day in prison, he 'shuddered like a nervous rat.' Forced to sing songs over and over again with a parched throat in the freezing cold to entertain the guards, he is beaten with an electric baton. When he cannot go on any longer, he is stripped and wrestled to the ground: 'I could feel the baton on my butthole, but I refused to surrender. The tip of the baton entered me. I screamed and then whimpered in pain like a dog.' Liao tried to commit suicide twice, once by bashing his head against the wall. This elicited ridicule from his cellmates, who accused him of playacting, something they thought typical of a bookish poet. If he had really wanted to smash his skull, he should have made sure to use the wall edge." 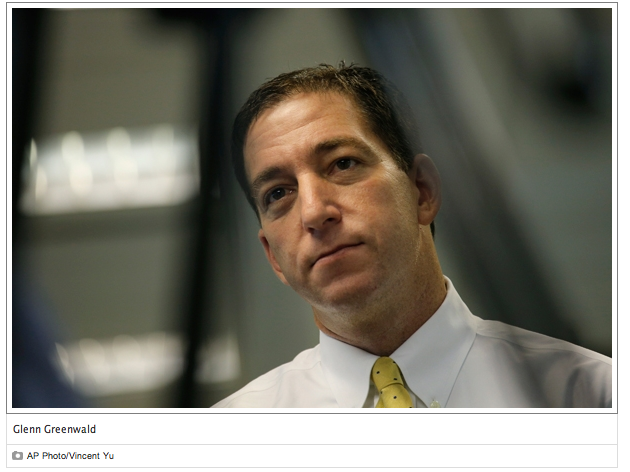 "Hey, MSM: All Journalism is Advocacy Journalism." By Matt Taibbi of Rolling Stone. New York Times Dealbook writer Andrew Ross Sorkin has apologized to journalist Glenn Greenwald for saying he'd "almost arrest" him, for his supposed aid and comfort of NSA whistleblower Edward Snowden. Tabbi uses the incident as a springboard to talk about the distinction between a supposed regular journalist and an "advocacy journalist" or "polemicist," and how loaded those terms are, and what they really mean when particular people use them. Related: "Who's a Journalist?" by The New York Times' public editor, Margaret Sullivan.
Advertisement

"All journalism is advocacy journalism. No matter how it's presented, every report by every reporter advances someone's point of view. The advocacy can be hidden, as it is in the monotone narration of a news anchor for a big network like CBS or NBC (where the biases of advertisers and corporate backers like GE are disguised in a thousand subtle ways), or it can be out in the open, as it proudly is with Greenwald, or graspingly with Sorkin, or institutionally with a company like Fox. But to pretend there's such a thing as journalism without advocacy is just silly; nobody in this business really takes that concept seriously. 'Objectivity' is a fairy tale invented purely for the consumption of the credulous public, sort of like the Santa Claus myth. Obviously, journalists can strive to be balanced and objective, but that's all it is, striving." 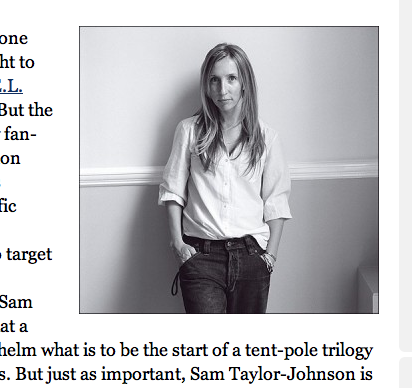 "Why Sam Taylor-Johnson Directing 50 Shades of Grey Matters." For Forbes, Scott Mendelson writes about the ramifications of hiring a young woman to direct the eagerly-awaited movie adaptation of the bestselling novel; he says that if the film is a success, it could signal a break from Hollywood's tendency to promote while male directors up to "A"-list status even though their feature resumes are short or nonexistent, while devaluing similarly talented women and directors of color.

"Rupert Sanders had only a few commercials to his credit, yet he was being tasked with directing the $175 million tentpole Snow White and the Huntsmen for Universal.  Marc Webb made exactly one film (500 Days of Summer), yet Sony entrusted him with their Amazing Spider-Man reboot.  Joseph Kosinski had zero feature film or television credits to his name before being entrusted with Disney’s $175 million would-be franchise starter Tron: Legacy. The would-be newbies are always white males, almost never filmmakers of color or female directors.  White/male filmmakers need only make one somewhat well-received film, or maybe even just have a few commercials under their belt, to be thrust to the top of the ‘wish-list’ of every major studio tent-pole.  Experienced directors who are either African-American (F. Gary Gray, Clark Johnson, Antoine Fuqua), female (Patty Jenkins, Lynne Ramsay, Debra Granik), or both (Kasi Lemmons) rarely if ever end up on the ‘wish-list’ for big-scale projects."

"A Brief History of the President of the United States, Action Movie Hero." By Bilge Ebiri, for Vulture. Wherein the cinematic legacy of ass-kicking Chief Executives is thoughtfully considered, with jokes. 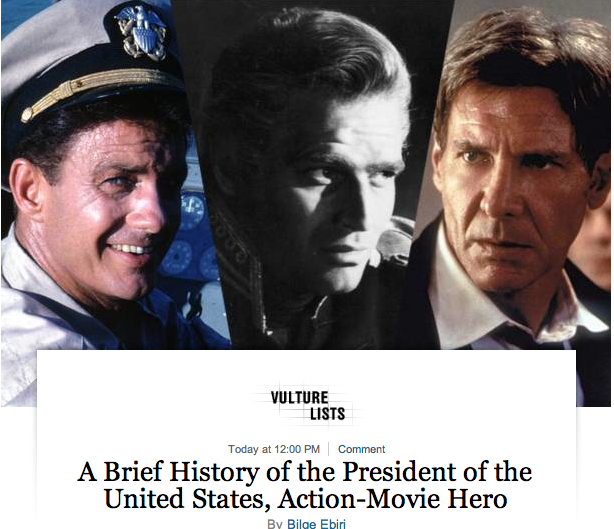 As Roland Emmerich not-very-subtly has a character remind you during White House Down, his new film is not his first go at depicting the President of the United States as a kind of action hero. It’s also not his first go at destroying the White House, which ID4 so memorably did, to the cheers of 1996’s audiences. (The film also killed off its Hilary Clinton–like First Lady, which might give you an idea of how public opinion about Hilary Clinton has changed over the years.) Anyway, although at first Pullman’s President Whitmore is caught off-guard by the massive alien invasion from outer space, he eventually steps into the role of hero/Commander-in-Chief, giving a rousing speech and then leading the nation’s ragtag, hotdogging air forces into battle against the aliens and their Apple-compatible computers." 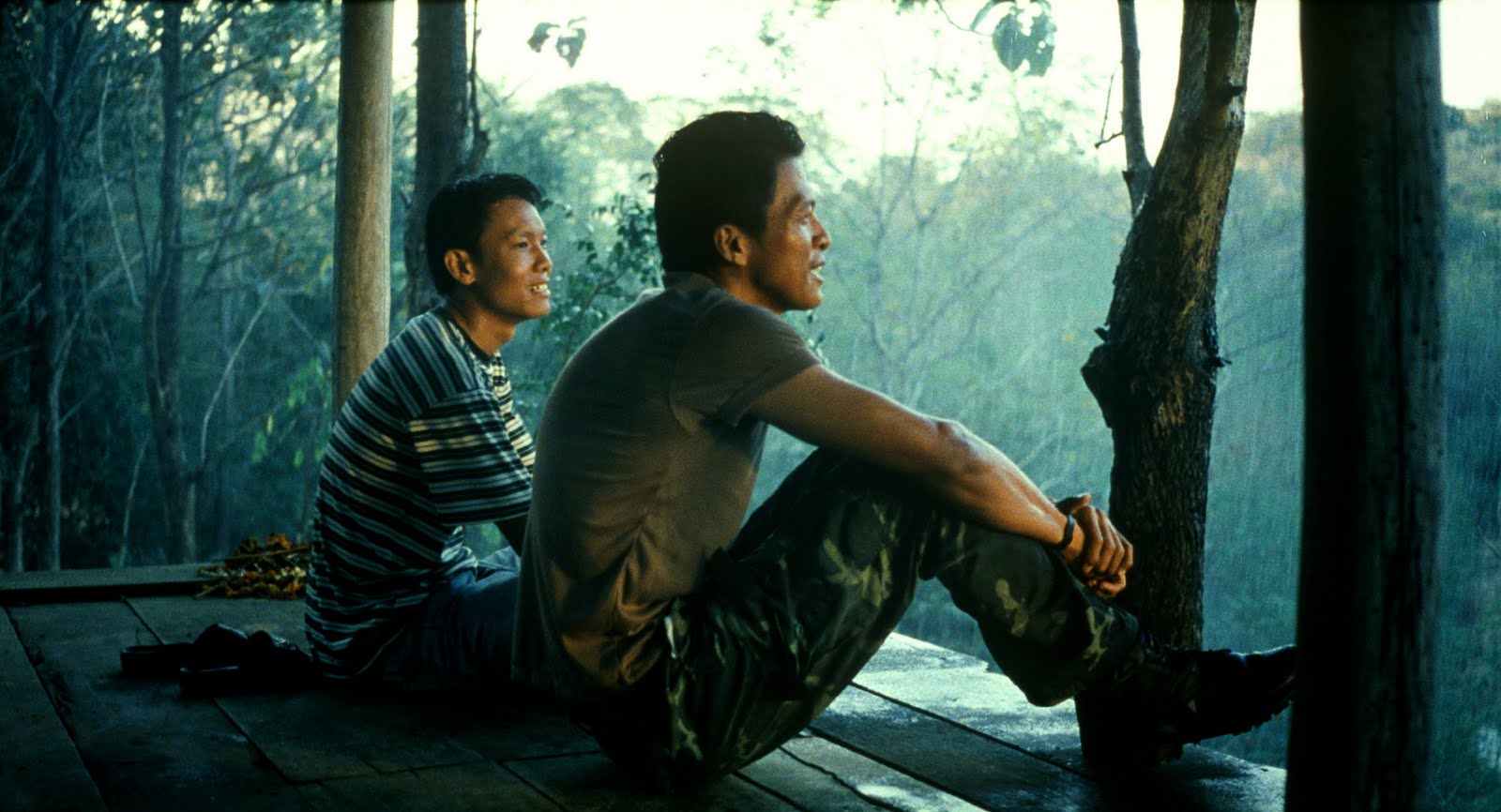 From Tropical Malady (Apichatpong Weerasethakul, 2004), one of the titles on The House Next Door's list of "50 Essential LGBT Films."

A video by Kari Mulholland for TED about an amazing, and in certain ways chilling, project. NPR's Robert Krulwich tells us about the artist Heather Dewey-Hagborg, who "can find a cigarette lying on the sidewalk on Myrtle Avenue in Brooklyn, and working from traces of saliva, by pulling DNA out of those saliva cells and using a bunch of simple algorithms available online, she can make some very educated guesses about what the smoker might look like." Click the link in the preceding sentence; the article about this project includes many CGI projections of what people look like, based solely on DNA samples taken from gum, cigarette butts, hair and other discards.