"Why the Pope was an Eli Wallach fan": In her obit for the veteran character actor, who died Tuesday at age 98, CNN's Carrie Rickey recalls a fan letter sent to the actor from the Pope. Related: Dan Callahan pens a remembrance of Wallach for RogerEbert.com. From the archives: Charles McNulty of the LA Times interviews the actor in 2010.

“Even the Pope was one of Eli Wallach's biggest fans. So said the cheeky chameleon of an actor when he received an honorary Oscar in 2010 and remarked that the pontiff -- he didn't say which one -- wrote him a fan letter extolling his performance as the bandito Calvera in ‘The Magnificent Seven’ (1960). This struck Wallach as odd. ‘I've played more bandits, thieves, killers, warlords, molesters and Mafiosi than you can shake a stick at,’ he said. No doubt he got a pass from the Pope because as the bad guy, the famed character actor, who died Tuesday at 98, had a smile as lethal as his aim.” 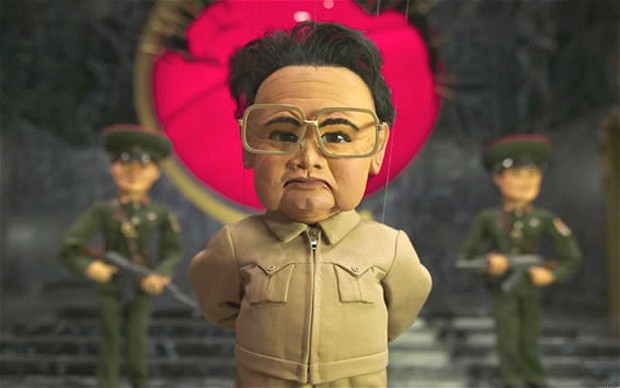 "North Korea threatens war on US over Kim Jong-un movie": The BBC is one of many news wires reporting on the rather outrageous statements made by a North Korean foreign ministry spokesman indicating that the upcoming Seth Rogen/James Franco comedy, "The Interview," could start a war with the US. His words, of course, inspired a priceless tweet from Rogen, who has been no stranger to controversy this year. Related: Ottawa Citizen's David Pugliese argues that "North Korea should forget about Seth Rogen's new movie and declare war over Team America."

“Franco and Rogen play a talkshow host and his producer who are invited to interview Kim Jong-un, and are subsequently recruited by the US Central Intelligence Agency (CIA) to assassinate the leader. The film’s teaser trailer, posted on Youtube, shows a lookalike actor playing Kim Jong-un, as well as fight scenes involving what appear to be North Korean tanks and helicopters, and a nuclear missile launch. The North Korea spokesman was quoted by the state KCNA news agency as saying: ‘Making and releasing a movie on a plot to hurt our top-level leadership is the most blatant act of terrorism and war and will absolutely not be tolerated.’ He added that the ‘reckless US provocative insanity’ of mobilising a ‘gangster filmmaker’ to challenge the North's leadership was triggering ‘a gust of hatred and rage’ among North Korean people and soldiers. ‘If the US administration allows and defends the showing of the film, a merciless counter-measure will be taken,’ the spokesman was quoted as saying.” 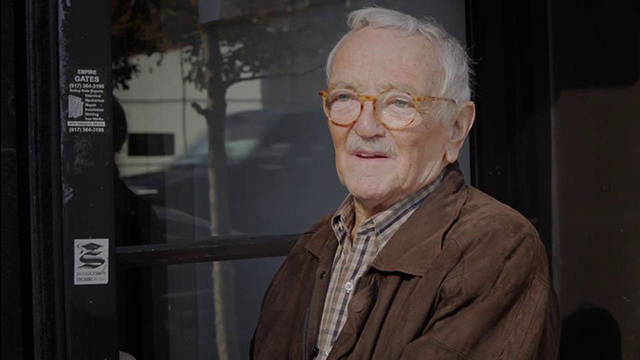 "Remembering Peter de Rome: the maker of gay erotica loved by Warhol, Gielgud and the BFI": The Guardian's Brian Robinson pays tribute to the groundbreaking director who died June 21st at age 89.

“He had no hang-ups about his sexuality, and no trouble picking up men. Yet he was working at a time when many like him were stricken with guilt and when it was largely illegal to show explicit gay sex. He could probably have been arrested for creating pornography but he found a way to trick the censors by shooting something innocuous at the beginning and end of each reel. Astonishingly, his Super 8 films were returned from the developers at Kodak regular as clockwork. The results were screened, at first, at private parties where he turned up with his portable projector and his own choice of musical soundtrack (Messaien, Hindemith and Miles Davis were among his regular choices).” 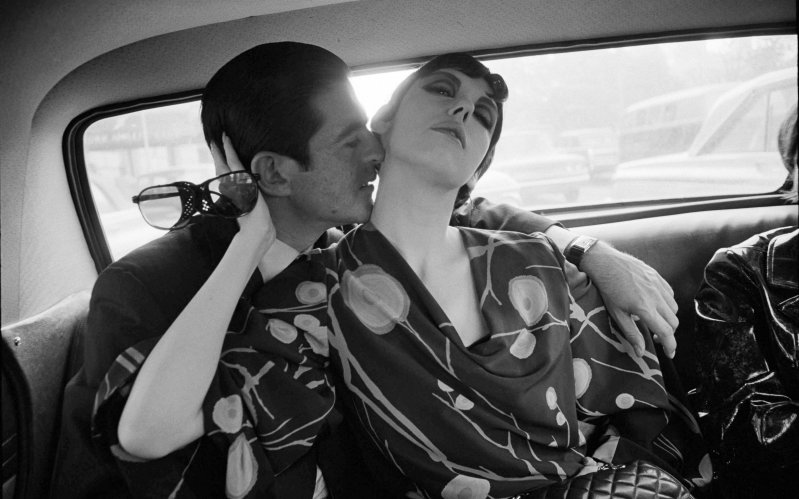 "Dennis Hopper: The Missing Years": At The Daily Beast, Liza Foreman reports on the exhibition, "Dennis Hopper: The Lost Album," opening at London's Royal Academy of Arts, showcasing photographs taken by the Oscar-nominated actor in the '60s.

“He discovered his passion for photography through James Dean, who he worked with on ‘Rebel Without a Cause.’ The photos, which constituted his first show, were originally shown at the Fort Worth Art Center in Texas in 1970, and all but disappeared until they were discovered in his garage after his death in 2010. What was uncovered between the boxes of Christmas tinsel in his garage in Los Angeles was a documentation of the cultural upheaval of 1960s America, from the civil rights movement to hippies, from pop art to the Beat poets and Hollywood, groups at both ends of the extreme. Images include those of a famous civil rights march from Selma to Montgomery in Alabama in 1965, which marked the high point of the movement and led to the 1965 Voting Rights Act outlawing voting discrimination. Among Hopper’s photographs is one of Martin Luther King Jr. making his famous speech.” 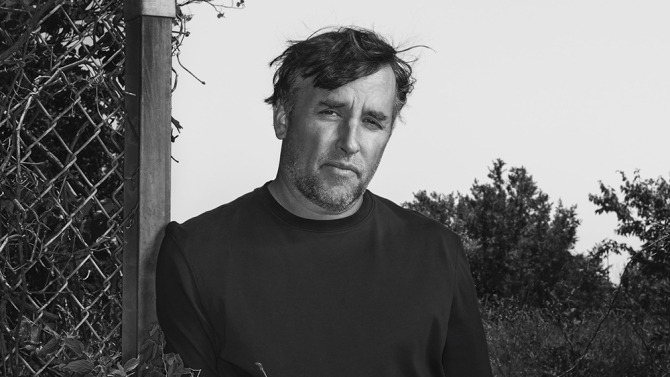 "Richard Linklater on 'Boyhood,' the 'Before' Trilogy and the Luxury of Time": Justin Chang of Variety conducts an in-depth interview with the acclaimed filmmaker.

“One of Linklater’s crucial early decisions was to shoot the entire picture on 35mm, a practical choice as well as an aesthetic one, given the 12-year timespan and the volatility of new digital formats. ‘I knew there would be nothing better than a 35mm negative to get a consistent look,’ he says. Today, with celluloid seemingly going the way of the dodo — the efforts of a few die-hards like Christopher Nolan and Quentin Tarantino notwithstanding — ‘Boyhood’ can be read on one level as an elegy not just for childhood, but for cinema itself. It is a film that, in every aspect of its conception and execution, feels proudly out of step with the prevailing logic of Hollywood, made by a director who couldn’t have defied conventional wisdom had he not spent a significant amount of time working within those conventions.” 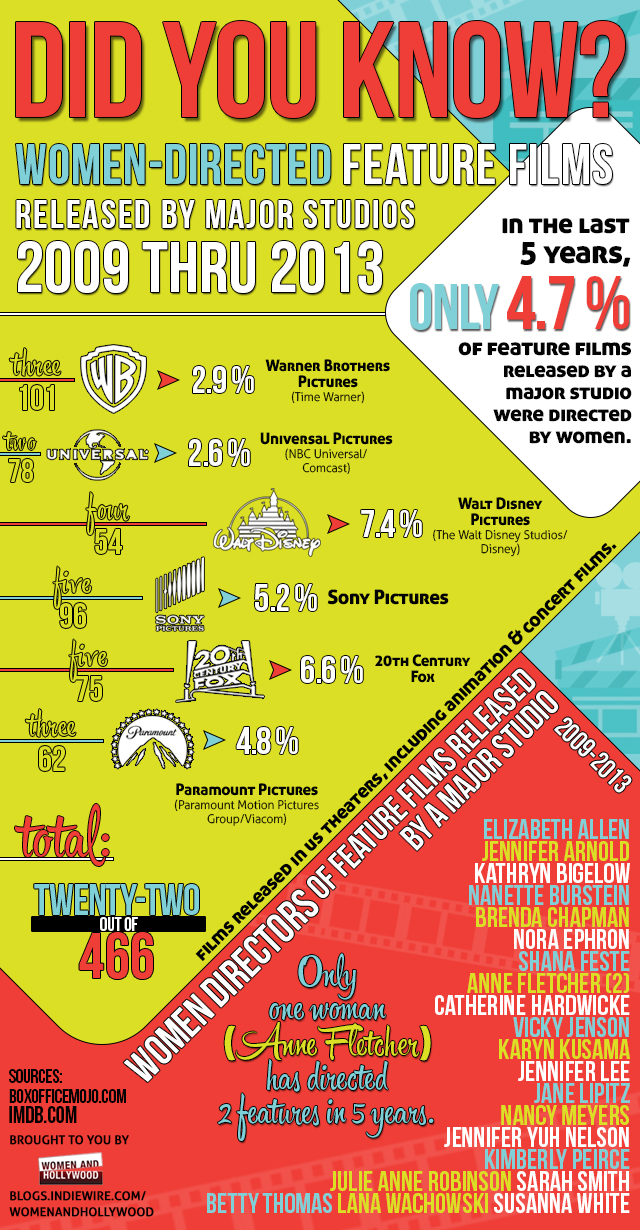 This infographic posted by Indiewire's Melissa Silverstein illustrates the current state of institutional gender discrimination in the current studio system.

A lovely vignette from the 2008 anthology film, "New York, I Love You," starring Eli Wallach and Cloris Leachman and directed by Joshua Marston ("Maria Full of Grace").