“At first glance, Vogt threatens to slip into the kind of broad social pronouncements that made ‘Crash’ feel like a filmed master’s thesis. The pronouncement here concerns technology, which Vogt treats as a rather transparent metaphor (and vice versa) for Ingrid’s blindness: both disconnect people visually from each other in a way that breeds alienation. The most obvious example is Einar’s porn habit, but there’s also Morten and Elin, who begin inching toward their tentative affair in an online chat room. To be fair, Vogt’s spin on this idea is refreshingly unexpected. Rather than merely repeat the often-heard condemnation of communication technology as the death of intimacy, the film suggests, with admirable ambivalence, that the internet might turn loneliness itself into a collective activity; the irony of Elin and Einar’s chatroom flirtations is that, aside from their mutual lonesomeness, they don’t have much in common. Technology here doesn’t so much keep people apart as allow them to almost, never quite connect, a bittersweet vision that defines the film’s tone. But the idea’s ambivalence doesn’t lessen its transparence, and it still feels as though Vogt is flirting with homily. Where ‘Blind’ swerves – and where the film redeems itself – is in the eventual revelation that the author of this homily is not Vogt, but Ingrid. As the narrative grows increasingly implausible, the activities of Elin, Einar, and Morten are revealed to be a figment of Ingrid’s vivid imagination (though whether in whole or in part is up to us to decide).”

“Ava idealizes the human form; her main fantasy, as she reveals to Caleb in one of their confessional dialogues, is to stand at a city intersection and watch humans passing, in a state of banality, simply living in the world. That this is her only apparent interest aside from reflecting Caleb’s own identity and interests back at him is telling. Ava has no clear curiosity about her own identity as a program, as an independent intelligence. Like Pinocchio, her desire is to ‘become real,’ while overlooking that she is already, on different terms, real. Her original form, in Butler’s words, is abject, discarded for the sake of humanity. But as Ava ascends the staircase out of Nathan’s compound, in a well-tailored dress, makeup, and high-heels, a question hovers around the film. What would her story be like if it was truly about a mind coming into its own, in all its complexity and foreignness? Ava has no opportunity to subvert what was set up for her; the fantasy of escape she eventually gives in to is a human fantasy. Her programming, and her design, is based around mimicking what humans do. But she is not human— and we are never allowed to see what such a consciousness, if allowed to develop, might look like. Only software that imitates one set of human desires. The rest, the deeper part, remains unknowable.” 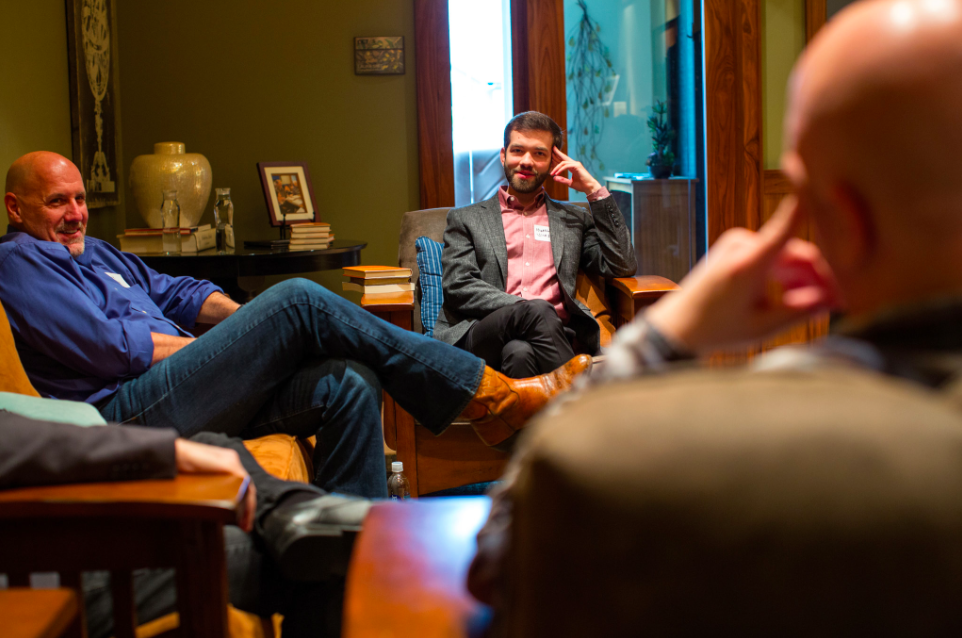 “As a young, gay Christian activist, Matthew Vines considered it a victory just to get into a room at a conservative Christian university here with four influential evangelicals who disagreed with him over what the Bible says about homosexuality. He ended up in a polite, heartfelt three-hour debate last month over Scripture passages about topics like celibacy, eunuchs, slavery — and the connections between sex and marriage. ‘Every single system you have within your body — whether it’s your respiratory system, your excretory system, your muscular system — can be completed as an individual,’ said Sean McDowell, a professor here at Biola University and a well-known Christian author and speaker. ‘But there’s only one system in which male and female have half and become a united whole, and that’s in reproduction.’ But God intended marriage to be about more than ‘plumbing,’ Mr. Vines argued: ‘Marriage ideally should be about permanent, mutual, self-giving, self-sacrificing love.’ As acceptance of same-sex marriage has swept the country and as the Supreme Court prepares to release a landmark decision on the issue, a wide variety of evangelical churches, colleges and ministries are having the kinds of frank discussions about homosexuality that many of them say they had never had before.” 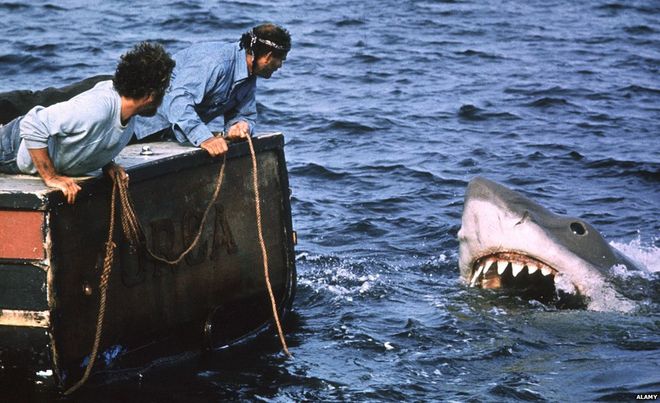 "How 'Jaws' misrepresented the great white": BBC's Mary Colwell argues that the creatures demonized in Spielberg's 1975 classic are undeserving of "their vicious reputation."

“It's loosely based on a real incident in 1916 when a great white attacked swimmers along the coast of New Jersey. ‘A collective testosterone rush certainly swept through the east coast of the US,’ says George Burgess, director of the Florida Program for Shark Research in Gainesville. ‘Thousands of fishers set out to catch trophy sharks after seeing ‘Jaws,’’ he says. ‘It was good blue collar fishing. You didn't have to have a fancy boat or gear - an average Joe could catch big fish, and there was no remorse, since there was this mindset that they were man-killers.’ The author of Jaws, Peter Benchley, was deeply perturbed by this. ‘Knowing what I know now, I could never write that book today,’ he said, years later. ‘Sharks don't target human beings, and they certainly don't hold grudges.’ He spent much of the rest of his life campaigning for the protection of sharks. Burgess suggests the number of large sharks fell by 50% along the eastern seaboard of North America in the years following the release of ‘Jaws.’ And research by biologist Dr Julia Baum suggests that between 1986 and 2000, in the Northwest Atlantic Ocean, there was a population decline of 89% in hammerhead sharks, 79% in great white sharks and 65% in tiger sharks.” 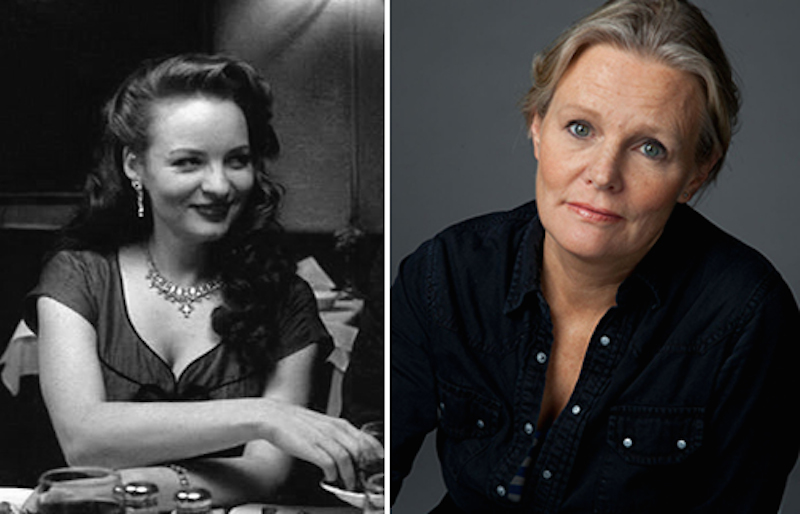 "Interview: Mary Harron on 'American Psycho' & More": In one of her guest blogs at The Film Experience, actress Cara Seymour interviews her "Notorious Bettie Page" director.

“CARA: ‘How do you feel about the lasting impact of ‘American Psycho’?’ MARY: ‘I’m kind of sick of it by now, but at the same time of course I'm grateful that it has had such an effect on people. When something hits the zeitgeist like that it is like winning the lottery. And it's curious because it took many years for it really to become a success. I don't think it made a single critic's top ten list when it was released and Christian didn't get any nominations in the US for his amazing performance. People didn't know what to make of it, so it had a kind of delayed reaction.’ CARA: ‘Would you make another dark satirical comedy?’ MARY: ‘I would love to but it's hard to find the right material. Good satire is rare as hens teeth. And I never get sent anything like that. I just get endless generic serial killer scripts, which really isn't what ‘American Psycho’ was all about.” 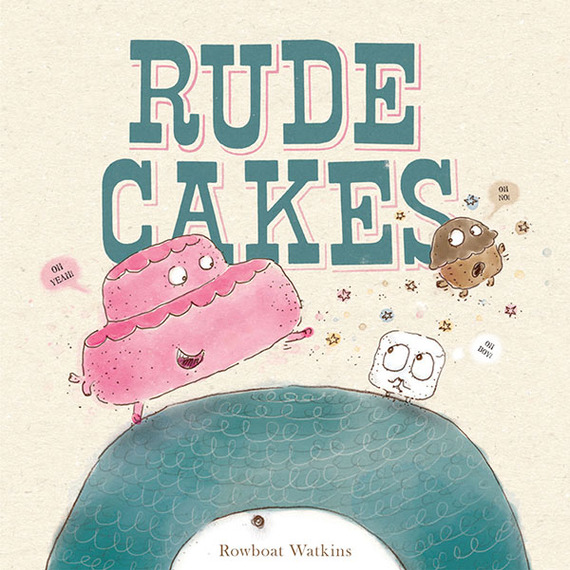 At The Huffington Post, our own Nell Minow interviews writer/illustrator Rowboat Watkins about his book, "Rude Cakes."

In honor of the dearly departed screen legend, Christopher Lee, here's a look back at his 2013 Christmas message.