“Standing ovations aren’t exactly rare at the Oscars—though they are rare for a category as marginal as Best Original Song. But the fervor of it was unlike anything I’ve seen before—at least, as it was picked out by the producers of the show. David Oyelowo, the star of ‘Selma,’ was openly sobbing in his seat (directly in front of Oprah). Actor Chris Pine, seated elsewhere, had tears streaming down his face. Presenter Jessica Chastain was visibly moved. Immediately after the performance, ‘Glory’ won best song, and the entire audience stood up again. Was it motivated by guilt, or by an especially good performance of the song, or something else entirely? I don’t know, but once the artists finished their (very moving) speech, the audience stood up and applauded, again. (Pine was one of the first to spring to his feet.) I wondered about this as the telecast continued, for the audience seemed unlocked by ‘Glory,’ and the latter half of the show was a lot more emotionally freewheeling than the former. The audience that could barely muster up the energy to applaud through the ‘In Memoriam’ segment of the show rose to its feet again when Julie Andrews walked out to present Best Original Score, at least in part because musician Lady Gaga poured her heart into a pitch-perfect, incredibly theatrical medley of songs from ‘The Sound of Music.’ An hour earlier, that might have been just another moment the Oscars audience would have stonefacedly not cared about; by 11:15 p.m. Eastern time, it felt like any emotion at all was on the table. And as the awards limped to their silly, anticlimactic close—where three or four movies about white men bickered over which should be the winner—it was abundantly clear that the real story of the night was about how the typically stodgy ceremony felt. Given the academy’s self-satisfied enthusiasm for ‘Birdman,’ an ‘arty’ film that confirms the body’s pretensions to sophistication, it is not too surprising that ‘Selma’ got snubbed along with the Roger Ebert documentary ‘Life Itself,’ in which the great film critic says that movies are ‘machines of empathy.’ He continues: ‘It lets you understand a little bit more about different hopes, aspirations, dreams and fears. It helps us to identify with the people who are sharing this journey with us.’” 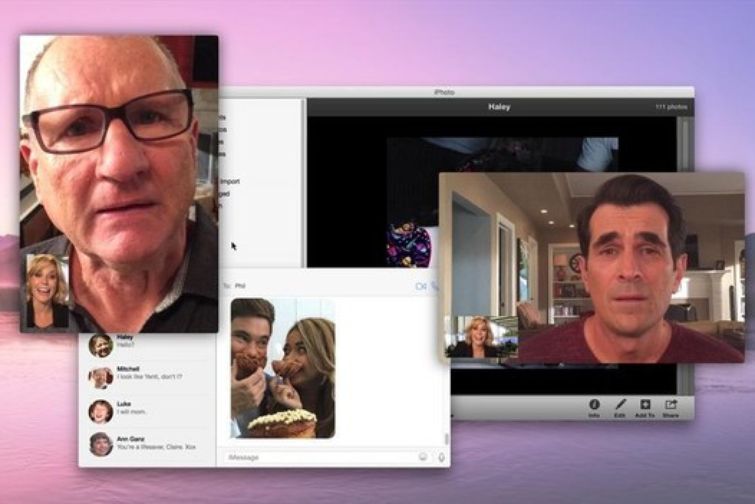 “‘Modern Family’ has always been built around the deadpan, the dry joke, the take to camera. Like ‘The Office,’ ‘Modern Family’ is shot as a mockumentary, giving the characters the opportunity to break the fourth wall. Arguably, a deadpan take to camera requires little effort on the actor's part: all it requires is looking into a lens. Sure, sometimes actors on this show take the easy way out and shoot a passing glance to the audience rather than pursue the moment's comedy in more difficult ways. But typically, the comic sensibilities of the actors on ‘Modern Family’ are mature enough that they find ways to keep this feeling fresh. The question surrounding this episode, then, is can the show be funny without deadpan? After all, if the entire episode is ‘actors looking directly at the camera,’ doing a quick take to camera can't be the punchline. The solution to this was to experiment with how to tell a joke. Traditionally, sitcom humor relies on spoken jokes or physical comedy. What's fascinating about ‘Connection Lost’ is how many of its jokes are textual. One character says something, then Claire types something, and her typing provides the gag. For example: Claire calls up brother Mitchell (Jesse Tyler Ferguson) to wish him a late birthday. She asks if the present she bought him arrived. Yet while the two talk, we see her buy the present at RalphLauren.com and opt for Next Day delivery. When her brother quips that he can't wait to check the purchasing date on the invoice, Claire cancels the purchase. That quick exit functions much the same way as a smash-cut to Claire offering a take to camera.” 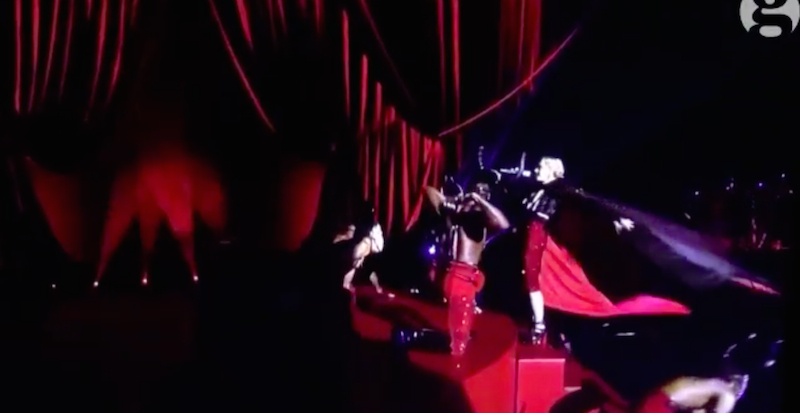 "Madonna is superhuman. She has to be to survive the ugly abuse.": The Guardian's Bidisha examines the resilience of the 56-year-old icon.

“The Armani cape Madonna was wearing as she approached the podium was tied too tight and didn’t fall undone when her dancers pulled it. She was yanked back by the neck and flew through the air over three steps, landed hard at the base of the podium and for a split second didn’t move. Watching at home, my heart stopped. Is that all it takes to kill a queen? Milanese outerwear? The hateful hashtags #shefellover, #Fallenmadonna, immediately began toxifying Twitter: ‘I get it, Madonna. My grandma is exactly the same.’ ‘I hope grandma’s ok. A broken hip at her age could be a death sentence.’ But as Madonna also sang last night, ‘I picked up my crown, put it back on my head. I can forgive, but I will never forget.’ After a fall like that, anyone else would roll around screaming in agony then look for someone to blame. She drew on a higher power: herself. Showing her famous mental and physical strength, she got to her feet, picked up the choreography and tune, un-lip-synced and note perfect – as the isolated vocals from her performance at the Grammys show – and finished triumphantly. That is the Madonna I’ve loved for ever, starting with the flamenco moves of La Isla Bonita. They say you’re not supposed to believe the hype. But with some people, the mythos is real. She has mystique, the rare bulletproof real-deal charisma. She has never been defined by men and has always advocated for other women, pointing out in her upcoming Rolling Stone cover interview that ‘people like to pit women against each other.’” 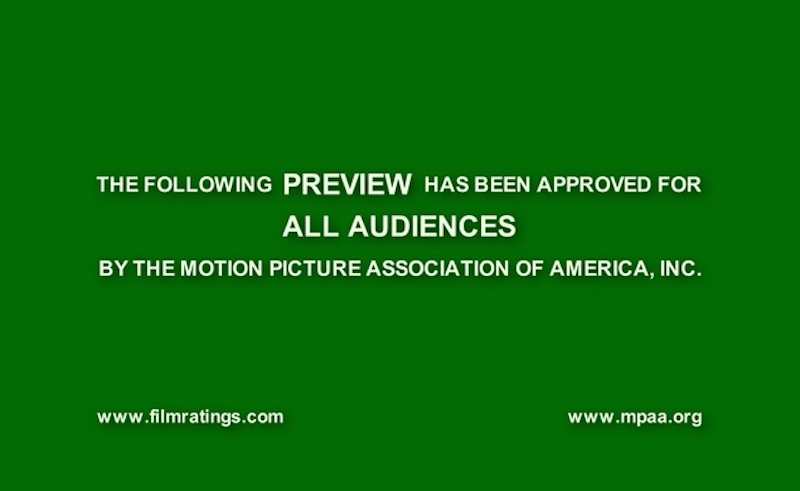 "The trailer is not the movie": Yet another essential essay from The Dissolve's Nathan Rabin.

“A while back, our own Tasha Robinson wrote a great piece on how freaking out, months, even years, in advance about movies based on rumors, gossip, or just plain misinformation was a pointless exercise that benefited neither filmmakers nor filmgoers, and just filled the Internet with more gusts of hot air. Tasha did not mention trailers in her essay, however, and I have found that trailers are perhaps the premiere source and subject of hysterical, shrill, and misinformed pre-release cinematic freak-outs.It seems like every time a big movie trailer debuts, there is a flurry of uninformed, or barely informed, opinion on whether the trailer in question ensures that the film it advertises will be good or not. That makes sense, and in trailer posts here at The Dissolve, we’re naturally inclined to try to glean as much as possible from these sometimes irresistible, sometimes loathsome looks into cinema’s future. But there’s also a tendency, online in particular, to make trailers out to be far more important than they actually are, to act as if they are the films they advertise in microcosm rather than, well, advertising, two- or three-minute long commercials with a single goal in mind: to move product, to sell tickets and lure audiences into theaters by any means necessary.” 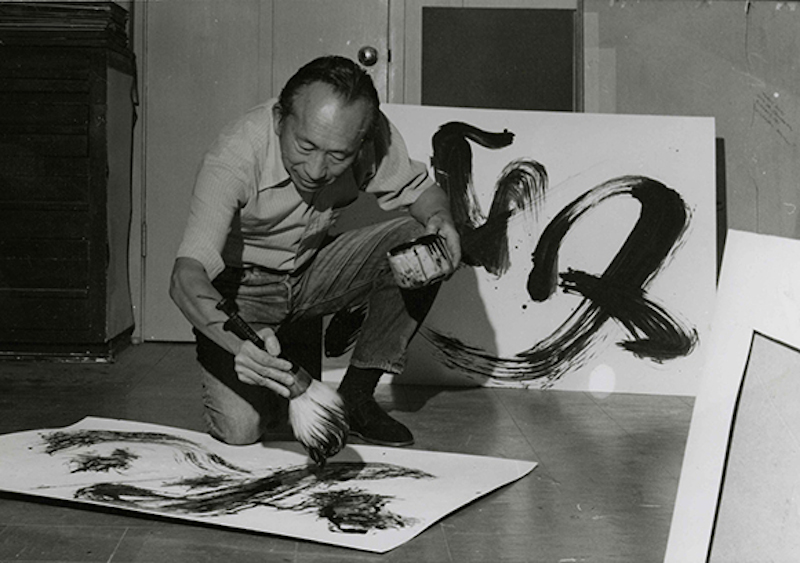 "Chinese Brushstrokes in Hollywood: The Works of Tyrus Wong": KCET'S Meher McArthur explores the life of the Chinese immigrant who became the only Asian American honored as a "Disney legend."

“Tyrus Wong was born in southern China in 1910. When he was just 9 years old, he and his father left his sister and mother behind in China and traveled to the U.S. After a grueling detention on Angel Island and a brief stay in northern California, Wong and his father settled in Los Angeles. (They never saw the rest of their family again.) As a child, Wong displayed a great talent for art, and his father encouraged it, something unusual for an immigrant father. He taught him to paint Chinese characters with a brush dipped in water on newspaper, forcing him to practice them daily -- an activity that provided him with a strong foundation in Chinese brushwork. One of Wong's school teachers was impressed by the boy's lettering skills and encouraged him to apply for a scholarship to attend Otis College of Art and Design. At age 15, Wong became the youngest student there, and his father worked extra hard to cover expenses beyond the scholarship. Soon after graduation, Wong applied to Disney Studios to work on ‘Bambi.’ Walt Disney himself saw great originality and potential in the young man's sketches, and his work gave the film the unique visual style Disney was seeking. Despite his success with ‘Bambi,’ Wong soon moved to Warner Brothers, where he worked as a motion picture illustrator for over 30 years, lending his considerable talents to films including ‘Rebel Without a Cause,’ ‘Harper,’ and ‘How the West Was Won.’ In the 1930s, he also exhibited with Pablo Picasso and worked as a muralist for FDR's New Deal-era Works Progress Administration (WPA). Throughout his life, he continued to paint in a style inspired by Chinese painting but with his own unique approach to color, tone and composition.” 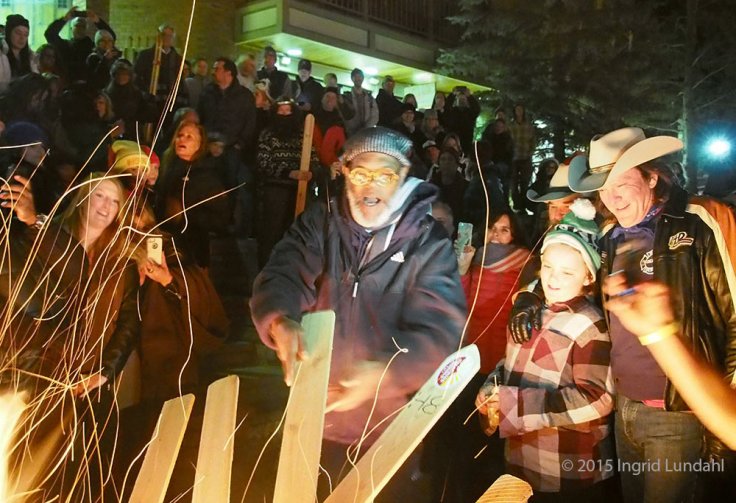 At Colorado Public Radio, Ingrid Lundahl captured this image of Quentin Tarantino's "Hateful Eight" cast members Samuel L. Jackson and Michael Madsen appealing to the Norse god Ullr for a sorely needed snowstorm in Telluride (perhaps they should relocate the production to Chicago).