"Rokhsareh Ghaem Maghami on 'Sonita'": The wonderful Iranian filmmaker chats with me at Indie Outlook about her Sundance prize-winning documentary, which is nominated for a Film Independent Spirit Award.

“[Indie Outlook:] ‘Another director from Iran, Asghar Farhadi, is choosing to skip the Oscars in light of President Donald Trump’s proposed travel ban. How has the ban impacted your decision to attend the Independent Spirit Awards?’ [Maghami:] ‘Some people told me that they could help me obtain a waiver, and I said, ‘No, I don’t want to be an exception. If they do this to all the people of these seven countries, I want to be one of them.’ But now that the courts and the judiciary system have blocked Trump’s ban, I decided that it would be okay for me to get the visa and attend the ceremony out of respect for what they did. It feels like a victory now, especially since every Iranian that gets inside the United States will break Trump’s heart. Going to the ceremony feels better to me than not going to the ceremony.’ […] [Indie Outlook:] ‘Any future filmmaking plans?’ [Maghami:] ‘Right now, I’m just open to the world to inspire me, and in general, the biggest inspiration is Trump. We should look at him as a gift to the world because there will be a lot of positive things happening. There will be a lot of artistic creation, and there will be a growing progressive movement in America that will be much more organized. He is the real face of capitalism, and it’s good to see the real face instead of seeing some beautiful face on a horrible book. He’s a horrible picture on a horrible book, which is more honest. I think that we are all in a creative mood this year.’” 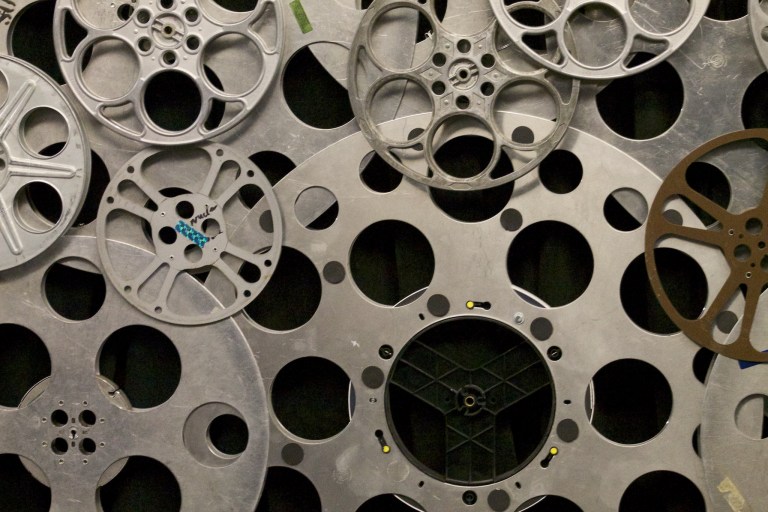 "What Happens Next": Newcity's Ray Pride interviews Chicago filmmakers about their thoughts of life under the Trump Administration.

“Documentary maker Ruth Leitman’s instincts are in the present moment. ‘If there was ever a time that would affirm all my years of hard work with little financial reward as a documentary filmmaker, it would be this moment,’ she says. ‘There is no better way to move people than through the power of nonfiction film and, especially, now when the integrity of the media has become questioned, our work as documentary filmmakers comes to the fore. With our durational commitment to social justice issues, we observe and capture evidence that the foot soldiers of change will need to deliver the message for change. Honestly, November 8 gutted me to the core. All around me were my daughter and her friends, voting for the first time, and my students, who looked for reassurance that something like this could not happen. This is not normal. I feel a tremendous responsibility to make work that is infused with the power of our democracy and the values of who we are, as a beautiful mix of all people. After this horror sunk in, I began work on a project to highlight, educate help to mobilize people around women’s reproductive rights. I started a new film at the Women’s March in New York City, that will follow the most impressive, fierce group of activists, working to protect reproductive rights as we enter this new battle to protect Roe v. Wade.’ Leitman also conveys ‘half a manifesto’: ‘Keep your camera rolling on local politics and stay on top of your elected officials more than ever to do as they say. And march and get loud. The local marches in Chicago and places outside of D.C. have tremendous meaning. Keep it up. My favorite story was one about a bunch of ten-year-old girls who planned a march in their cul-de-sac ten miles outside of Atlanta. This is what we are talking about when we talk about activating a new generation of activists.’”

"Interview with 'Chapter and Verse' writer/director Jamal Joseph": In conversation with David J. Fowlie of Keeping It Reel.

“Every time you walk into a visit with your parole officer, to an appointment – even if you know you’re doing the right things, you have a job, you’re taking care of your family, you’re not using drugs – there’s a feeling that something can come up and they can put the cuffs on you and you’re going back to prison. And there’s also a feeling that, if everything is not going well, that if you try to explain it to them, they’re not going to believe you because they pride themselves on knowing the game that prisoners try to run or people on parole and that you can still get locked up. So, there’s always that kind of tension. You know, I remember my parole officer showing up unexpectedly at my home for a house visit. It would be funny sometimes, because I would always be there and then sometimes I would open the door and I would have my baby, you know, my son who was a baby then, in my arms. So, there was that feeling. I’m here, I’m home, my wife is in the other room, I’ve answered the door with a baby in my arms – and you still can cuff me and take me away. There is the idea that they are the embodiment of state power and that state really considers you their property. So, we wanted to play that tension in a very real way. There’s the scene where Lance is sitting with Ty and their just looking at people passing by and he’s asking about his hopes and dreams. That scene was meant to capture that feeling that we all have when we’re little kids and we’re dreaming. Sometimes we play the game of what it would be like to be someone else, to live in that particular building, eat in that restaurant, ride in that car and have those kinds of friends. Lance had those times when he was little and would sit around dreaming a world beyond Harlem, beyond gang life, beyond, you know, an absentee father being in and out of foster homes. And so he sits and has a real great moment of connection where he plays this game with that young man and then to turn that game around and ask him how he sees himself in the future. It’s kind of a pure moment – again, something I share with young people that I counsel. I run a youth program in Harlem called Impact, that uses the creative arts and leadership training to empower young people. With my own children, when they were young, we would play that game of dreaming, looking at people’s lives and being the author, the narrator of your own life.” 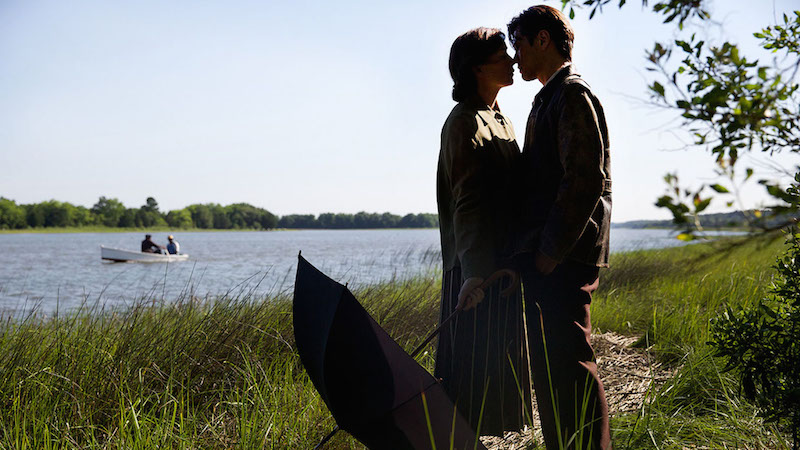 “Filmmaker: ‘It’s a gorgeous movie. I love that the colors are so vibrant and not that drab look so many period films go for.’ Greenwald: ‘In the first conversation I had with Wolfgang, I said ‘Forget sepia, it’s garbage.’ Even if it’s not a cliché, it has nothing to do with these people whose story we’re telling. On the internet I happened to find these color photographs from the teens and ’20s – some of the earliest color photographs. The blues and reds were really extraordinary due to the combination of the way color was reproduced at that time and the way it had aged, and Wolfgang and I fell in love with that and tried to replicate it. It’s funny, there was a costume designer we met with who came in with a lookbook that had pages of ideas that were exactly the colors we had been thinking about. I said, ‘Oh my God, this is amazing, I want it,’ but then we couldn’t afford her, and we couldn’t have afforded the costumes she had designed anyway. So that’s one of those times when I was limited by the budget – a big budget movie would have been exact in every detail, which is great but also makes it feel more like a movie and less like life. In a way what we ended up with was probably better, because the wardrobe feels more haphazardly put together in the way a woman would really dress. For example, I figure a woman who’s sixty years old, she’s going to have clothes from when she was forty that she still wears. She might only have one dress from 1940, but wears other dresses from the ’20s or ’30s. If it was a big budget movie, I could have had more outfits and it would have been gorgeous, but it wouldn’t have been essential.’” 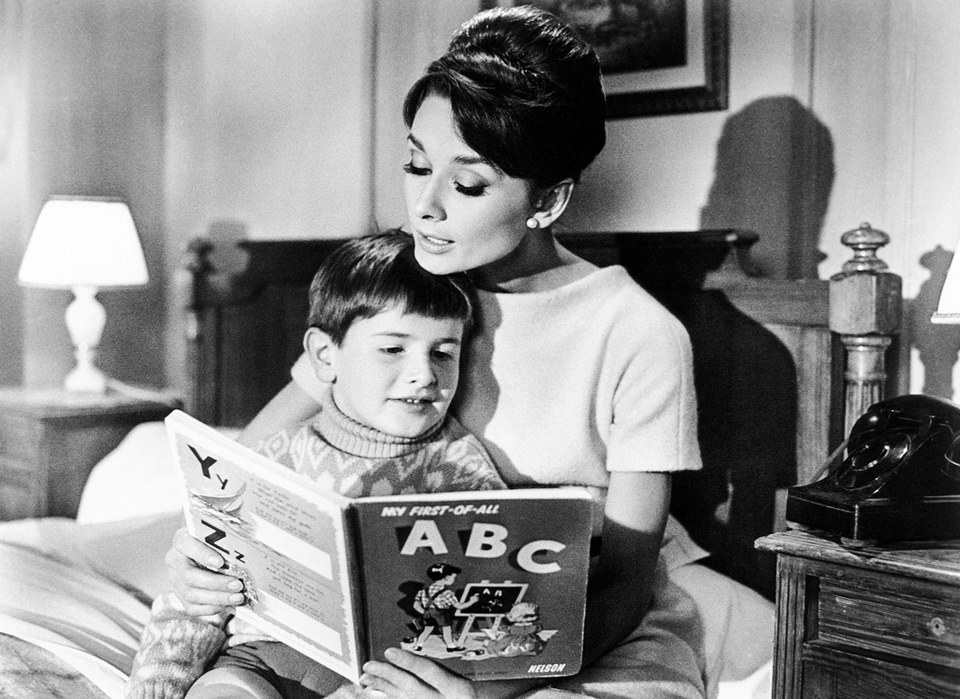 "The Kid Who Went Toe-to-Toe with Audrey Hepburn and Cary Grant": Vanity Fair's Donald Liebenson interviews Thomas Chelimsky, a.k.a. the little boy with the squirt gun in Stanley Donen's "Charade."

“Chelimsky’s parents got him the job after answering an ad looking for kids who spoke English with a French accent. ‘My parents very wisely hadn’t built it up to me as anything of significance,’ he says. ‘They just said we’re going to visit a movie studio, and you’re going to talk to some people.’ Hepburn and Grant were not on the radar of a six-year-old who had never visited the United States. But he must have been somewhat familiar with American films: Chelimsky recalls a magazine feature about the film in which, as a child, he expressed a French-accented hero worship of ‘Roy Rogairs.’ He and Hepburn bonded. ‘She was a grand lady, almost like my mom,’ he recalls. ‘We just had a great time together. I would sit on her lap. She taught me the alphabet in English.’ Cary Grant, he says, did not seem ‘very fond of kids in general, but somehow we struck up a relationship and he became more and more friendly with me. Shortly afterward, he had a kid with Dyan Cannon,’ his wife at the time. But his ‘best buddy’ on the set, he says, was Ned Glass. They shared a ‘bond of friendship’ symbolized by pieces of Scotch tape that each put on the back of their hands—though they were mindful to take them off once filming resumed. ‘He was a very nice guy,’ Chelimsky says. ‘He would tell me about New York.’” 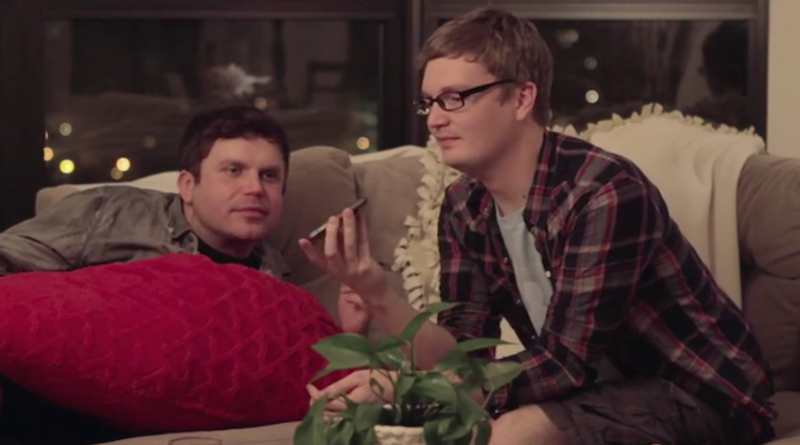 16 days left to help fund the Indiegogo campaign for "Cock N' Bull 2," the sequel to a very funny and unnerving short from filmmaker Nathan Adloff, director of the excellent features "Miles" and "Nate & Margaret." Click here to view the first short and find more info on the campaign.