"The Invisible Woman: A Conversation with Björk": The iconic singer is interviewed by Pitchfork's Jessica Hopper.

“When I did this album—it all just collapsed. I didn’t have anything. It was the most painful thing I ever experienced in my life. The only way I could deal with that was to start writing for strings; I decided to become a violin nerd and arrange everything for 15 strings and take a step further than what I’ve done before. I had like 20 technological threads of things I could have done, but the album couldn’t be futuristic. It had to be singer/songwriter. Old-school. It had to be blunt. I was sort of going into the Bergman movies with Liv Ullmannwhen it gets really self-pitying and psychological, where you’re kind of performing surgery on yourself, like, What went wrong? Then I got really lucky. I’m not religious but I must have earned some good karma at some point, because as one thing got taken away from me, Alejandro [Ghersi, aka Arca] came. [smiles, tears up] I don’t want to brag, but I get a lot of requests to work with musicians and a lot of time I say, ‘I’m very flattered, but it’s not right.’ But he approached me almost two years ago, and it was just the most perfect timing ever. I’d just written like a scrillion songs and done these string arrangements, and the subject matter was so difficult that I wanted to move away from it. Then he came on a visit to Iceland, and we just had the best time ever. He’s the most generous, funny person I’ve ever met. It was such a contrast, the most fun music-making I’ve ever had, with the most tragic subject matter. Somehow, he could just take it on.” 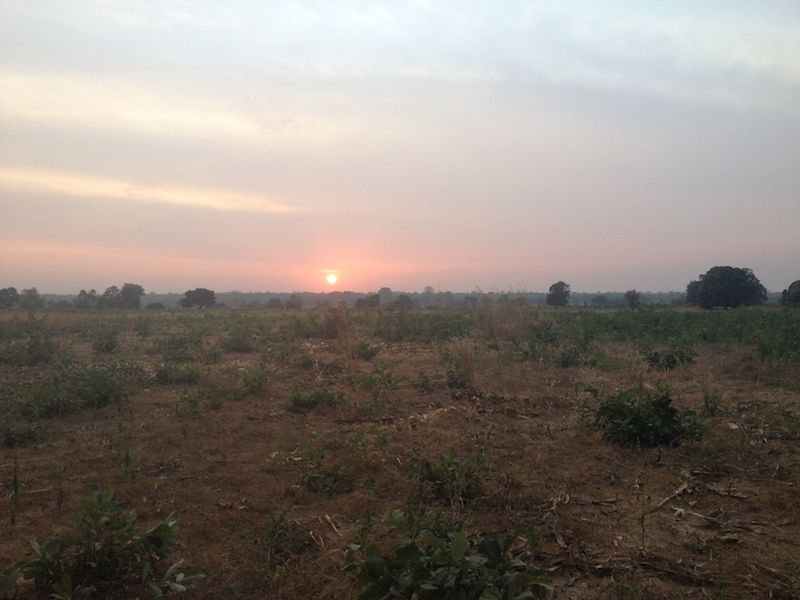 "What Senegal is Teaching Me About Life and Death": Corin James, daughter of "Hoop Dreams" director Steve James, writes beautifully about her Peace Corps experience in Senegal on the blog, To Live Is To Change.

“Senegalese funerals are very different from American funerals. They last for days, even weeks. Everyone comes to the house and spends all day there. There is lots of crying, greeting, eating, and of course, drinking tea. This house was packed with people when I got there.  People from all over Senegal — Kedougou, Dakar, you name it — this man touched so many lives. Especially within my town, I would say that he was one of if not the most well-known and respected figure. Our mayor died a couple years back and people tell me that Balla’s funeral was more well attended. When I got to the house, I couldn’t be in denial anymore. The reality of Balla’s death started to sink in.  I was upset. Balla had been so immensely helpful to me in my first months at site which, obviously, are a vulnerable time. He was patient, warm, and encouraging. He never told me I couldn’t speak Pulaar and would instead slowly explain things if I didn’t understand. He was a very well-connected man in my town and was always able to help me with any problems I was having. I couldn’t believe that he was gone and I wouldn’t get to talk to him again, to thank him for all that he did. I felt an immense sadness.” 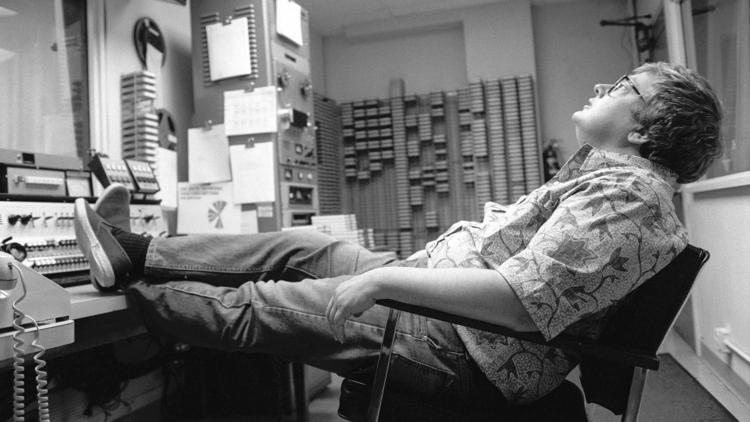 "Analysis: How did 'Life Itself' not get an Oscar nomination?": Nina Metz of the Chicago Tribune investigates.

“‘The question of why the film wasn't nominated is one we'll probably be asking ourselves until the next major snub comes along, because they do happen on a fairly regular basis,’ Gold Derby senior editor Daniel Montgomery said. ‘In this case, one has to wonder about the relationship between critics and the industry they cover. Were voters reluctant to honor a man who may have spoken unfavorably about their work or their colleagues' work? I hope not. Ebert was a critic, of course, but he was also a fierce advocate for film, documentaries in particular.’ If a fraught dynamic exists between artists and critics, Ebert often transcended that acrimony. He was a national brand and widely read; his support of small documentaries had a measurable impact. Is it cynical to assume this quality, coupled with a perceived sentimental duty to mark his legacy, should have secured ‘Life Itself’ a nomination? Ebert was a towering figure among journalists. That context is worth remembering when trying to suss out what happened here. We in the media steer the conversation and it's no surprise that we are drawn to a movie about one of our own. (On the same day ‘Life Itself’ failed to score an Oscar nomination, it won best documentary at the Critics' Choice Awards.)” 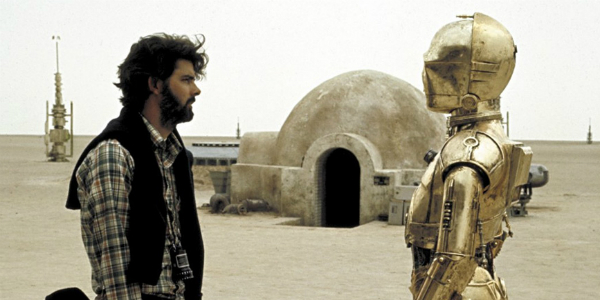 “I had the chance to speak with Lucas for his upcoming film, an animated musical called ‘Strange Magic,’ and asked about any details he could offer on the ideas he was tossing around. In response, he revealed this tidbit: ‘The ones that I sold to Disney, they came up to the decision that they didn't really want to do those. So they made up their own. So it's not the ones that I originally wrote [on screen in ‘Star Wars: The Force Awakens’].’ Unfortunately, he wouldn’t go into detail about his early ideas for his ‘Star Wars: Episode 7’ script, but there are some things we can infer. An interview with Mark Hamill from back in 1983 made the rounds online a while ago, and it revealed footage of Luke Skywalker talking about how Lucas approached him about playing an Obi-wan-type character in a potential sequel and passing the torch to another generation of Jedi. Though, this seems like a general enough kernel of a story to have also been thought up by Abrams and company. Could it still be in play?” 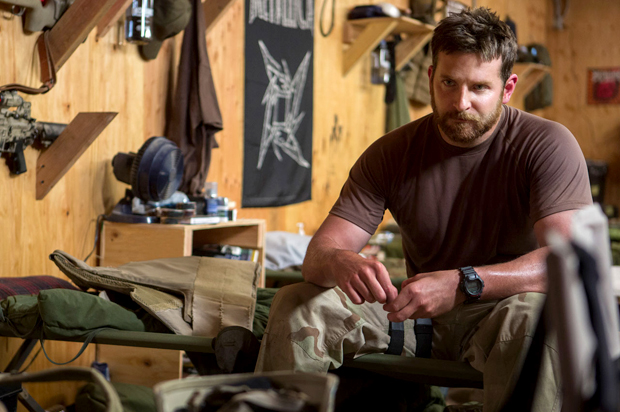 "'American Sniper' and the culture wars: Why the movie's not what you think it is": Salon's Andrew O'Hehir explains why the film is not war propaganda.

“It’s like a forceful undercurrent of Orientalist and homoerotic fantasy: Which of these guys will end up drilling the other one with an impossible rifle shot from 2,000 meters, the suave mustachioed Arab clad all in black or the buff, bearded Texan with the frat-boy ball cap? (You don’t even get one guess.) On the other hand, ‘American Sniper’ never shies away from depicting Kyle as racist and xenophobic, an innocent abroad rendered armed and exceptionally dangerous. After sitting through the film twice, I’m more convinced than ever that there’s a level of sardonic commentary at work that is sometimes subtle and sometimes pretty damn obvious. Pay attention to Cooper’s increasingly congested body language, the posture of a man stricken with unmanageable psychic distress. Pay attention to the use of the phrase ‘mission accomplished’ late in the film, or the stateside scene in which Kyle runs into a Marine whose life he saved in Fallujah and can’t even make eye contact with the guy. This is a portrait of an American who thought he knew what he stood for and what his country stood for and never believed he needed to ask questions about that. He drove himself to kill and kill and kill based on that misguided ideological certainty – that brainwashing, though I’m sure Clint Eastwood would never use that word – and then paid the price for it. So did we all, and the reception of this film suggests that the payments keep on coming due.” 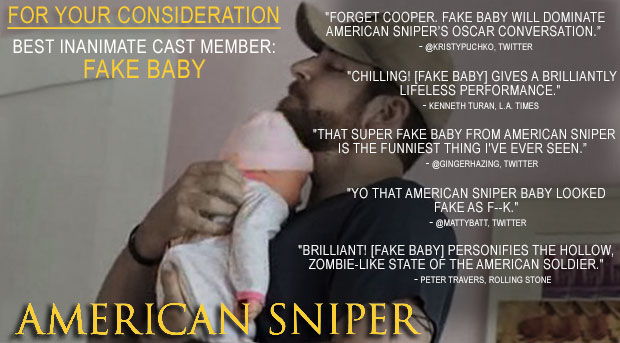 This hilarious Oscar "For Your Consideration" ad for the astonishingly phony baby cradled by Bradley Cooper in "American Sniper" comes courtesy of Nick Nadel and Kristy Puchko at IFC.