“While not as crassly opportunistic as mass Hollywood’s formulaic, monkey-see, monkey-do mentality, the nonfiction crowd isn’t immune to riding a wave, certainly not one this strong. Two out of the last three Oscars for Best Documentary went to films about musical acts (‘Searching for Sugar Man’ and ’20 Feet From Stardom’), and four out of the 10 highest-grossing documentaries of all time are centered on musicians—all of them released within the last six years. But whereas copycat narrative films are often greeted with critical eye-rolling (mitigated by frequently vindicating box office), there’s been scant skepticism about, say, the 14th or 15th documentary chronicling what it’s like to tour with the Rolling Stones. Since very few documentary filmmakers are making bank on documentary films, I don’t begrudge anyone seeking out a potentially lucrative musical subject, especially when the getting has gotten so good. But that doesn’t mean the rest of us are required to conflate industriousness with artistry, or career savvy with innovation. And it certainly doesn’t mean we should stop wondering when the collaboration between filmmaker and subject becomes a strategic partnership, or even a de facto service job. Again, I’m not interested in delegitimizing these films, not when there’s integrity in their creation and they succeed as works of cinema. But surely some skepticism is in order. Surely I can both appreciate the craft at play in ‘Amy’ and ‘Montage of Heck’ while also taking note of the fact that both were bankrolled by Universal Music Group, which has a lot to be gained from movies being made of their artists—especially deceased artists whose catalogues could use a little pick-me-up.” 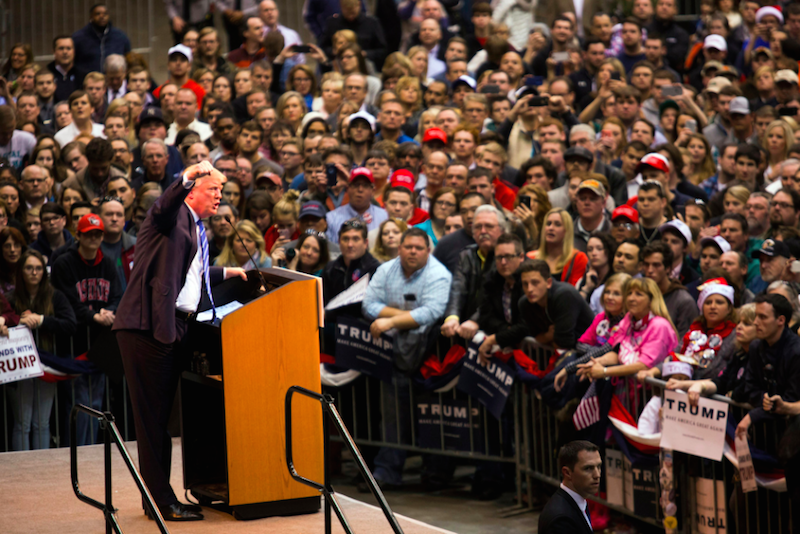 "95,000 Words, Many of Them Ominous, From Donald Trump's Tongue": Compiled by Patrick Healy and Maggie Haberman of The New York Times.

“Mr. Trump’s breezy stage presence makes him all the more effective because he is not as off-putting as those raging men of the past, these experts say. The most striking hallmark was Mr. Trump’s constant repetition of divisive phrases, harsh words and violent imagery that American presidents rarely use, based on a quantitative comparison of his remarks and the news conferences of recent presidents, Democratic and Republican. He has a particular habit of saying ‘you’ and ‘we’ as he inveighs against a dangerous ‘them’ or unnamed other — usually outsiders like illegal immigrants (‘they’re pouring in’), Syrian migrants (‘young, strong men’) and Mexicans, but also leaders of both political parties. At an event in Raleigh, N.C., on Friday evening, his voice scratchy and hoarse, Mr. Trump was asked by a 12-year-old girl from Virginia, ‘I’m scared — what are you going to do to protect this country?’ ‘You know what, darling? You’re not going to be scared anymore. They’re going to be scared. You’re not going to be scared,’ Mr. Trump said, before describing the Sept. 11 terrorists as ‘animals’ who sent their families back to the Middle East. ‘We never went after them. We never did anything. We have to attack much stronger. We have to be more vigilant. We have to be much tougher. We have to be much smarter, or it’s never, ever going to end.’” 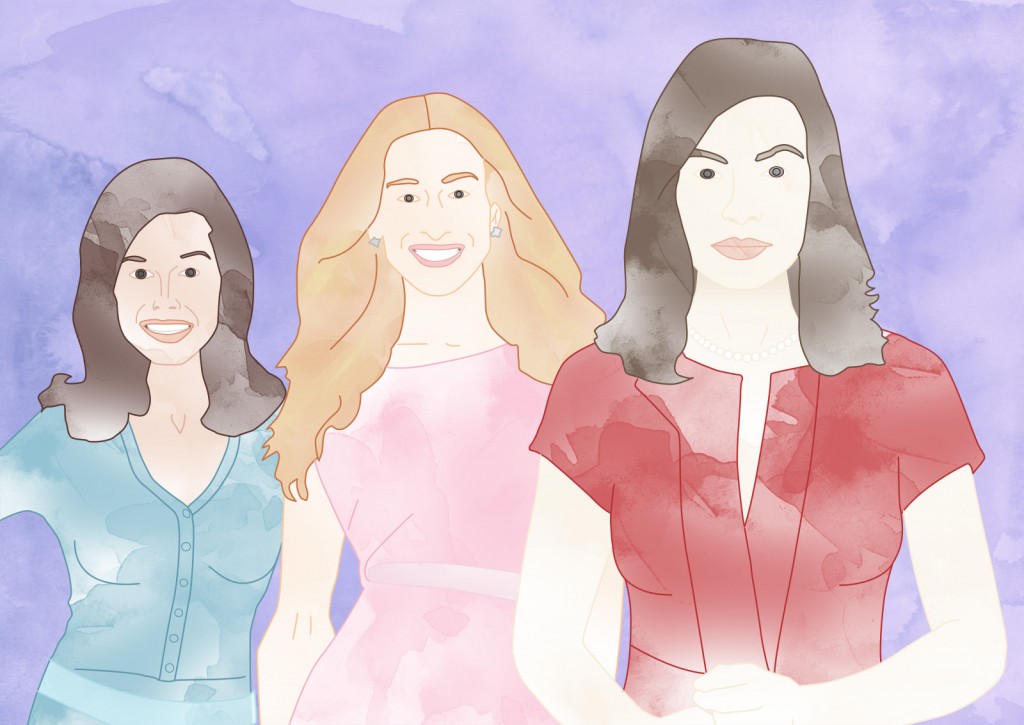 "All the Single Ladies on TV and in the Church": A provocative essay from Bekah Mason at Christ and Pop Culture.

“For all of the advantages gained by women through the first two waves of feminism, Christianity, at times, used those very advantages to reinforce the doubt felt in the 1970s: Could a single woman really make it on her own? Is it even God’s will that women be content in their singleness, or should the pursuit of marriage be the ultimate goal? Are women who are not married somehow inherently incapable of wholly displaying the ‘Imago Dei’? Often, one extreme is presented as an attempt to combat the other, and the battle between third wave feminism and evangelical patriarchy has become, at times, volatile. As is so often the case, however, this false dichotomy leaves women without a complete picture of biblical womanhood. The term Biblical Womanhood has become synonymous to marriage and motherhood, while the number of single women in the church, in seminary, and in the culture at large, continues to grow. And within the culture, singleness as an end unto itself has become one of many acceptable life choices. Two of the most popular shows on network television demonstrate this well. Both critically and popularly acclaimed, ‘Scandal’ and ‘The Good Wife’ portray marriage as broken. The majority of the main characters are not only single, but they also express an open aversion to commitment and marriage. One of the hooks for ‘Scandal’ has been the affair between Olivia Pope and Fitzgerald Grant. For four seasons, the ‘will they or won’t they?’ tension has kept viewers oddly hoping for the destruction of a marriage for the sake of true love. But when Fitz finally leaves his wife and Olivia openly enjoys the President’s bed, she balks at the idea of being in an openly committed relationship with him. Love is messy, confusing, and generally self-seeking.” 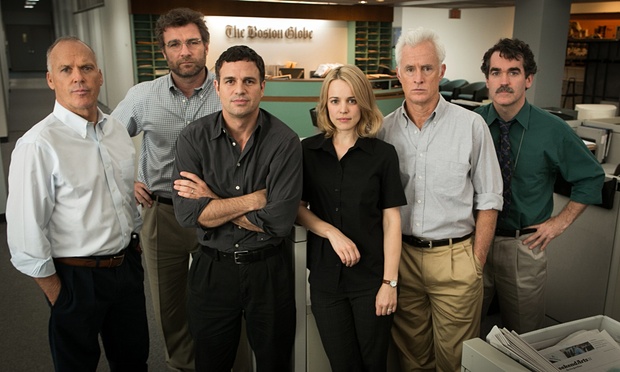 “The production companies behind ‘Spotlight,’ the Oscar contender about a team of Boston Globe journalists who exposed a cover-up of widespread sexual abuse of children by members of the Boston clergy, have established a $100,000 (£65,000) fellowship to promote investigative journalism. In 2001, the Globe’s Spotlight team published details of a number of priests who had been removed from their posts after allegations of sexual misconduct, only to be placed in new parishes. The scandal developed into a national story as more victims of abuse at the hands of Catholic priests came forward and resulted in a global crisis for the church. Todd McCarthy’s film of the story, which stars Mark Ruffalo, Michael Keaton, Rachel McAdams and Brian d’Arcy James as the Spotlight journalists, is being talked up as a potential Oscar best picture winner. The cast picked up a Screen Actors Guild nomination for best ensemble yesterday, while McAdams, who plays Globe reporter Sacha Pfeiffer, is among those nominated for the best supporting actress prize. The film also received three Golden Globe nominations, for best picture (drama), best director and best screenplay. The Spotlight Investigative Journalism Fellowship, which is open to journalists with a large body of work published in major news outlets, is designed to promote American journalism that has the potential to reveal the abuse of power in the private or public sectors. The money will be awarded by a panel including editors and reporters, as well as Betsy Reed, editor-in-chief of the Intercept, the online portal of First Look Media, which is also a contributor to the fund.” 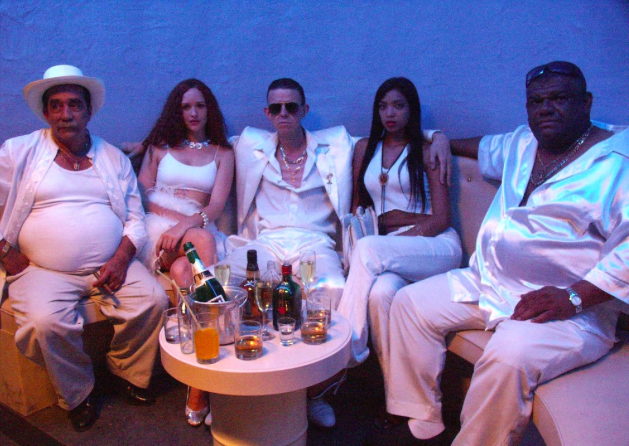 "Visionary Director Alex Cox on Joe Strummer, Punk and Getting 'Blacklisted' By Hollywood": In conversation with Vice's Harry Sword.

“[Vice:] Are you really ‘blacklisted’ by Hollywood? [Cox:] ‘Yes. It happened after ‘Walker.’ Things are often done via proxy; the real villain of the piece in ‘Walker’ was the bonds company that kept hassling us during the shoot. I'm still not really sure what crime I was accused of. We were shooting battle scenes and really dramatic bits and pieces with lots of multi-angles, and if we had a second camera in the truck we'd get it out and use it to shoot horses galloping by, as you would on any movie. But the bond company took this as an indication of my unsuitability as a director; they tried to shut the film down, but they ultimately failed. They seized a load of equipment; the crew were held up for about a week, during which time the cast just waited. We didn't know what to do—we were thinking, Shall we make another movie in the meantime? We could make a movie about the missing equipment; make a movie about waiting for it to turn up. But the idea was so exhausting and we were struggling to keep the thing afloat. But they failed. It was ultimately pointed out to them that nothing was going wrong, that everything was fine, and that if they pursued the aggressive tact that they were taking that it would end up in litigation—and that they would lose and that it would cost them a lot of money. And so we were able to finish the film. But that was the last film I made like that; after that point I realized that this is some kind of gangster operation, y'know? These financier companies kind of set themselves up and say they'll step in and take over if the director or producer ‘can't finish the film.’ But for fuck's sake! How many times has that happened? That the director or the producer were not able to finish it? It's a little gangster operation created in order to harass the filmmaker.’”

Check out Jef Rouner's article, "'Watership Down' and Why I've Given Up on Gun Control" at Houston Press.

Doug Walker, a.k.a. The Nostalgia Critic of ChannelAwesome.com, pays wonderful tribute to the classic holiday special, "A Charlie Brown Christmas."