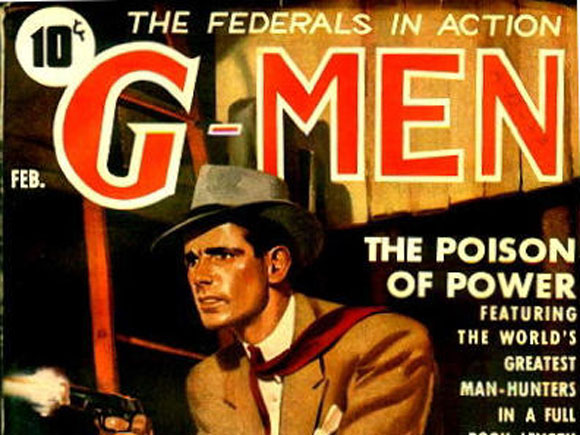 "The FBI Files on Being and Nothingness." Prospect's Andy Martin unearths a less-discussed candidate on the FBI list of potential Kennedy assassins: Jean-Paul Sartre. Related: NPR's "Marking Kennedy Assassination, Dallas Still On Eggshells." Also related: "'The Parallax View': A JFK Conspiracy Film That Gets It Right" by Alex Cox for The Guardian.

"The irony that emerges from the FBI files on Camus and Sartre, spanning several decades (and which, still partly redacted, I accessed thanks to the open-sesame of the Freedom of Information Act) is that the G-men, initially so anti-philosophical, find themselves reluctantly philosophizing. They become (in GK Chesterton’s phrase) philosophical policemen. Hoover needed to know if Existentialism and Absurdism were some kind of front for Communism. To him, everything was potentially a coded re-write of the Communist Manifesto. That was the thing about the Manifesto—it was not manifest: more often it was, as Freud would say, latent. Thus FBI agents were forced to become psychoanalysts and hermeneuts—drawn into what the historian Carlo Ginzburg neatly called the “cynegetic paradigm” (a brotherhood of clue-hunting detectives in which he includes Freud and Sherlock Holmes). Thus we find intelligence agents studying scholarly works and attending lectures. But the FBI were “philosophical policemen” in a second sense: in tracking Camus and Sartre (surveillance, eavesdropping, wiretapping, theft) they give expression to their own brand of philosophical investigations." 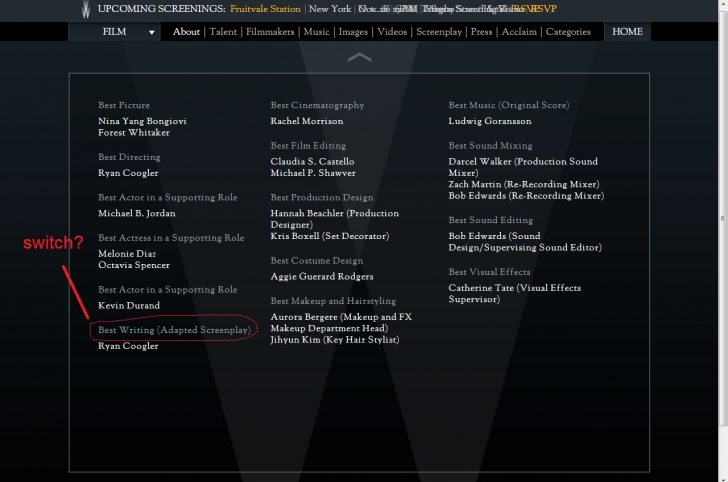 "Did Harvey Weinstein Switch 'Fruitvale Station' to Adapted Screenplay?" Award Circuit's Clayton Davis wonders if The Weinstein Company's revamp of their awards site includes some strategic changes made under the radar.

"One of the leading contenders for Original Screenplay is Ryan Coogler’s heart-tugging Fruitvale Station with Michael B. Jordan and Octavia Spencer.  Under the categories section, they have the film listed for Best Writing (Adapted Screenplay)….A few weeks ago, Scott Feinberg of The Hollywood Reporter reported that a mailer that went out listed Octavia Spencer in Lead Actress instead of Supporting Actress where she is being campaigned.  The Weinstein Company corrected their mistake and sent out corrected mailers for voting members. In the screener packed that I received, and that was sent out to all BFCA members, Coogler is listed in Original Screenplay for our consideration.If the listing is in fact true, did Ryan Coogler just land himself a nomination in Adapted Screenplay to face off against Jeff Pope and Steve Coogan‘s Philomena script, another Weinstein film?  Could Coogler upset presumed frontrunner John Ridley for 12 Years a Slave? My initial guess is that it’s a typo and will likely be corrected in the coming days (or even hours following this story).  Fruitvale Station is currently predicted in the top-tier contenders of Best Picture, Best Supporting Actress, and Best Original Screenplay on the official Oscar Prediction pages." 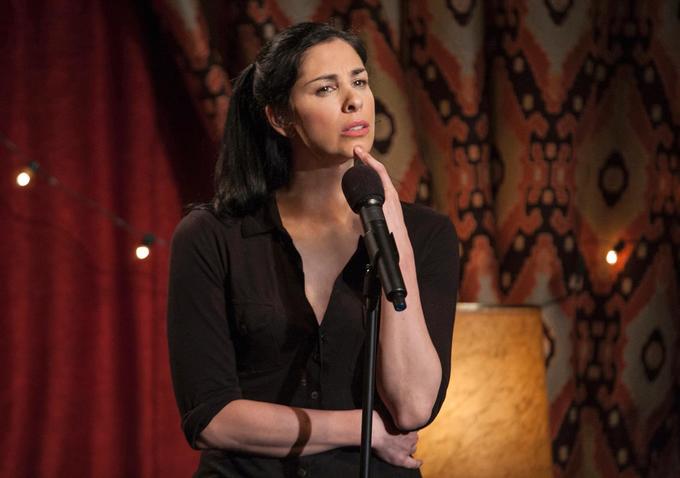 "Critic Tells Sarah Silverman to Watch Her Mouth; Internet Tells Him Where to Stick It." Indiewire's Sam Adams surveys the responses to an arguably sexist assessment of Sarah Silverman's career. The review in question: "Silverman's Bad Career Move: Being as Dirty as the Boys" by Variety's Brian Lowry. Editorial aside: The review was sexist.

"Amanda Marcotte, Slate: It's easy to be mad at Lowry for his condescending nonsense, but I'm actually in awe of his ability to hit nearly every major trope of the misogynist blowhard in a mere 500-word piece.

Bob Powers*, Happy Place: Here's the bottom line, Brian Lowry: you are a TV critic, not a comedy critic. I have no idea if you know anything about TV, but I am certain you know nothing about comedy. That's evident by the fact that you have to Xerox old reviews any time you write up something new from a female comedian. The fact that you don't know "proving she can be just as filthy as the boys" is an outdated, ridiculously condescending cliche proves you should let other people write about comedy. 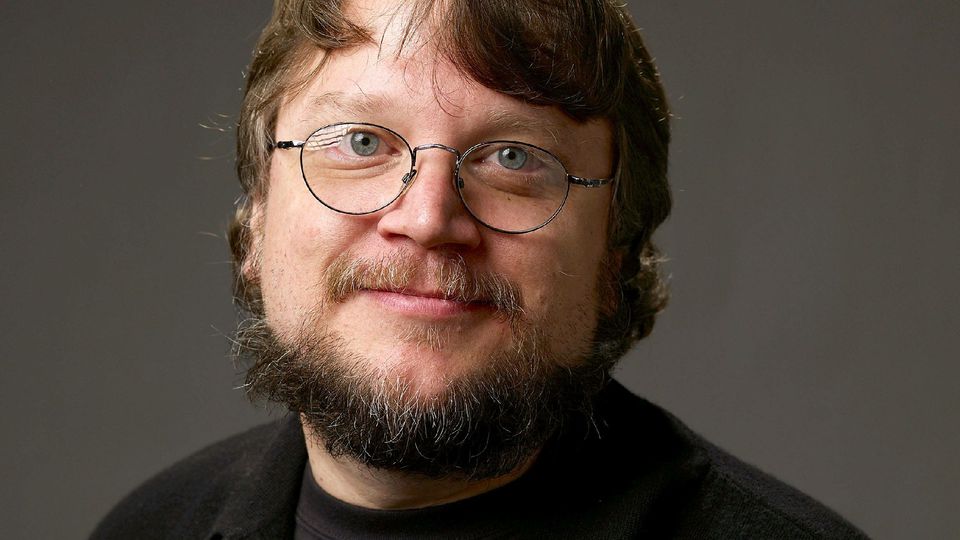 "I think the earliest time I noticed a movie monster was when I saw the Gill-man in Creature From The Black Lagoon. That shot of the Gill-man swimming under Julie Adams, which was at the same time for a kid my age, mysteriously sexy, because I didn’t know what sexy was. [Laughs.] And enchanting and magical and powerful in a way that only monster movies can be. Still, to this day, I think it’s the perfect creature suit. In the history of film, there are two perfect creature suits: that and the Xenomorph in Alien. It’s just the marriage of the performer, the design, and the director. The way the environment allows them to exist is amazing. Creature From The Black Lagoon, the way they shot it, where they shot it, who shot it, everything is perfect. These are perfect occurrences. And Ridley Scott shooting Alien the way he shot it. The performer, Bolaji Badejo, is just amazing." 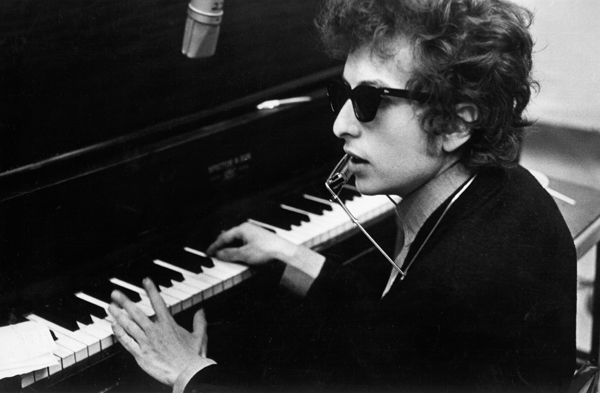 "Created by the digital agency Interlude, the video is interactive, allowing viewers to flip through 16 television channels as a variety of television personalities lip-sync the lyrics.'I'm using the medium of television to look back right at us,' director Vania Heymann told Mashable. 'You're flipping yourself to death with switching channels [in real life].' Adds Interlude CEO Yoni Bloch: 'You'll always miss something because you can't watch everything at the same time.' The stations you can flip through include a cooking show, The Price Is Right, Pawn Stars, local news, a tennis match, a children's cartoon, BBC News and a live video of Dylan and the Hawks playing 'Like a Rolling Stone' in 1966." 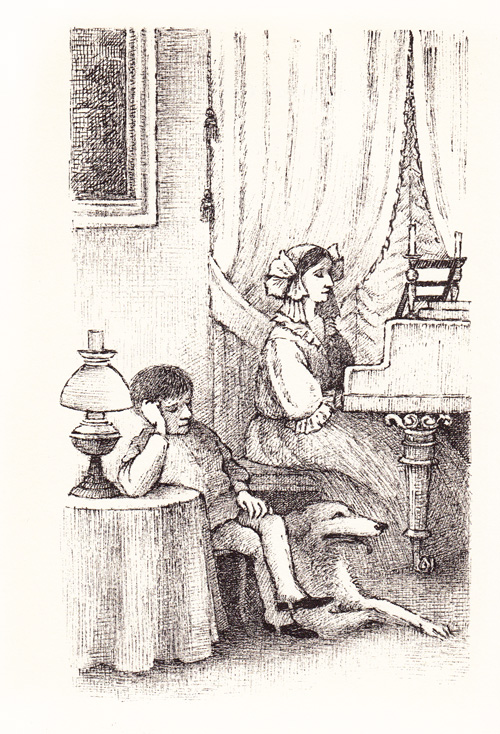 "November 22, 1963." In Errol Morris' short film, Josiah “Tink” Thompson ponders the question that has haunted him for 50 years: Will we ever know the truth about the Kennedy assasination?