“As in the cartoon, Maleficent’s arrival interrupts the third good fairy’s gift … but Maleficent never condemns Aurora to die. Instead, she herself decrees that the princess will fall into an enchanted sleep from which only true love’s kiss can awaken her. The ungiven gift of the third fairy is irrelevant; the film never even returns to it. Not only is this poor storytelling and poor revisionism, it’s central to the movie’s ham-fisted subversion of the Christian symbolic world of ‘Sleeping Beauty’— probably the most overtly Christian fairy tale in the Disney canon. ‘Sleeping Beauty’’s Maleficent is an explicitly satanic figure: ‘mistress of all evil,’ in league with ‘all the powers of Hell.’ At the climax she transforms into a dragon to battle Prince Philip, the most archetypally heroic male lead in any Disney cartoon. Philip has been armed by the good fairies with a ‘sword of truth’ and a ‘shield of virtue’ bearing the figure of a cross, weapons evoking the ‘armor of God’ in Ephesians 6. Their epic battle pits Christian knight against diabolical dragon, a pure allegory of good versus evil. None of this happens in the Jolie film.” 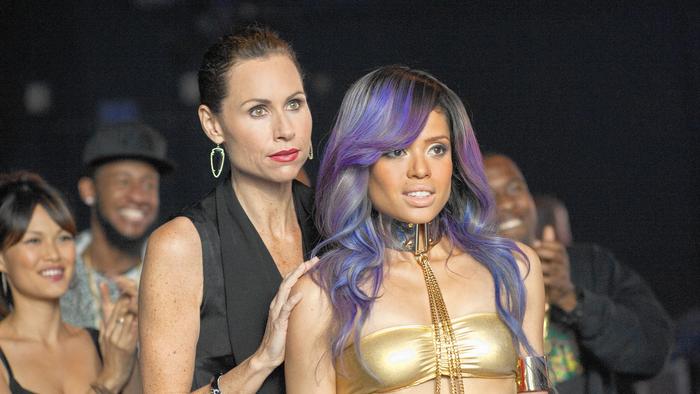 “Before production even began on ‘Beyond the Lights,’ Prince-Bythewood had decided that everything in her movie would have to pass muster with modern-day music fans. The film, which hit theaters Friday, follows an up-and-coming singer named Noni (Gugu Mbatha-Raw) who falls for a strapping young cop (Nate Parker) after he saves her from jumping off a hotel balcony. Though the core of the film is its dramatic romance — akin to the one in the director's most-recognized project, 2000's ‘Love & Basketball’ — its pop-world setting plays a vital role. In addition to her flashy crib, Noni stays at high-end hotels, stars in provocative music videos and walks the red carpet at award shows. She has a lavender weave, bejeweled fake nails and a stage mother who forces her to abstain from carbs. In fact, the character is so entrenched in the pop world that film executives initially insisted the part be played by an actual musician. Sony Pictures, which at one point bought the option to ‘Beyond the Lights’ for a year, wanted Rihanna or Beyoncé. But Beyoncé was attached to Clint Eastwood's remake of ‘A Star Is Born’ — a project that never came to fruition — and Rihanna wasn't interested in playing a singer. Alicia Keys, who Prince-Bythewood had worked with on her 2008 film ‘The Secret Life of Bees,’ shared insider industry advice with the filmmaker and briefly considered the role, but that also fell through.” 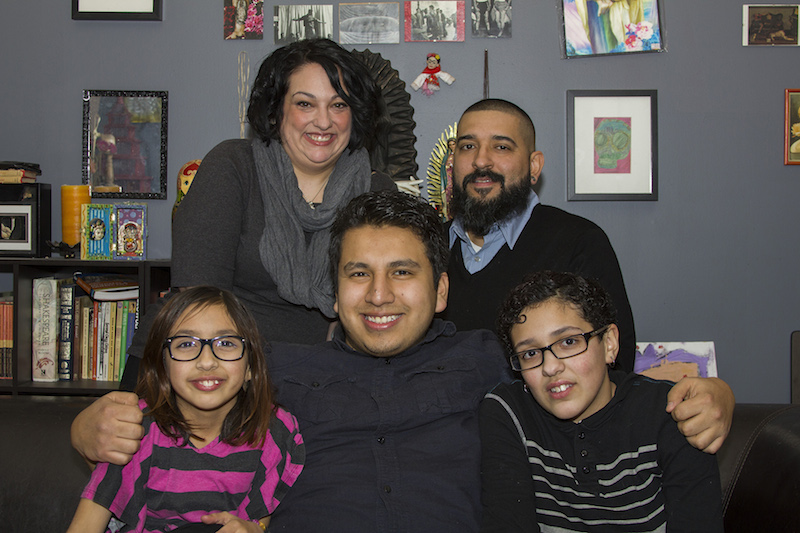 "Anne de Mare and Kirsten Kelly on 'The Homestretch'": At Indie-Outlook, I interview the filmmakers about their powerful documentary, opening today at Chicago's Gene Siskel Film Center. The film follows three homeless teens (Kasey, Roque and Anthony) as they attempt to build a better life for themselves.

“What sort of catharsis can theatre bring to kids like Roque? [Kelly:] ‘I think there’s something really powerful about discovering how words have power. It’s not just about what you say but how you say it. These ancient stories may have no relevance in your life, but once you infuse them with your own personal experiences and point of view, they become really powerful. When Roque came into that program, he would not speak. He felt completely invisible, and I think that ‘awakening of voice’—and what that means on various levels, consciously or unconsciously—has the potential to happen in the CPS Shakespeare program. You are being asked to speak these powerful words and also bring yourself front and center. The audience wants to hear your point of view and your experience and your humanity. It was this very weird symbiotic moment when we started understanding that Roque’s story so deeply connected to Hamlet’s story, considering everything that went on with his uncle and his parents. It was really amazing and bizarre in how deeply that connected. We’ve done so many different plays in that program, but there’s something about Hamlet and the betrayal at the center of it that resonates with kids. They get that sense of betrayal more than the professional actors I’ve worked with.’” 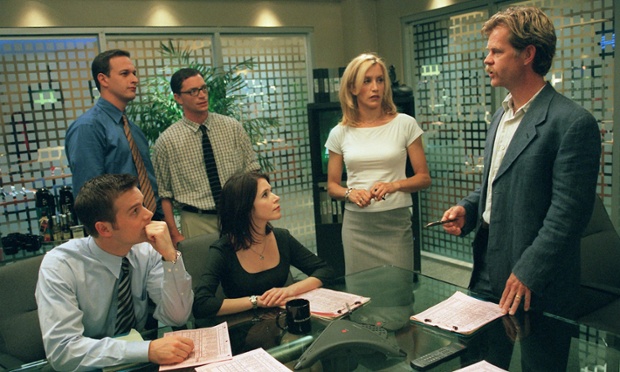 "Forget 'The Newsroom' and 'The West Wing': 'Sports Night' was Aaron Sorkin at his best": The Guardian's Sarah Hughes makes a convincing case.

“Yet, for all my admiration of Sorkin’s style and substance, the way he makes the complex seem clear and the frothiest subjects worthy of serious contemplation, 'The West Wing' leaves me ever so slightly cold. Maybe it’s because I never grew up enough to stop being cynical about politics but I watch Sorkin’s shining city on the hill as a critic, not a fan, admiring but always slightly detached. 'Sports Night,' on the other hand – now, that’s a show. Even saddled with an inappropriate laughter track (which Sorkin rightly argued against, understanding that this was a sitcom without the traditional beats), 'Sports Night' shines. Set behind the scenes of a fictional sport highlights show and clearly modelled on ESPN’s SportsCenter – in 2012, when The Newsroom started, news anchor Keith Olbermann, who made his name on SportsCenter, told ‘The New York Times’: ‘This is the second show he [Sorkin] has done about my life’ – 'Sports Night' follows a group of journalists as they live, love and put out the show.” 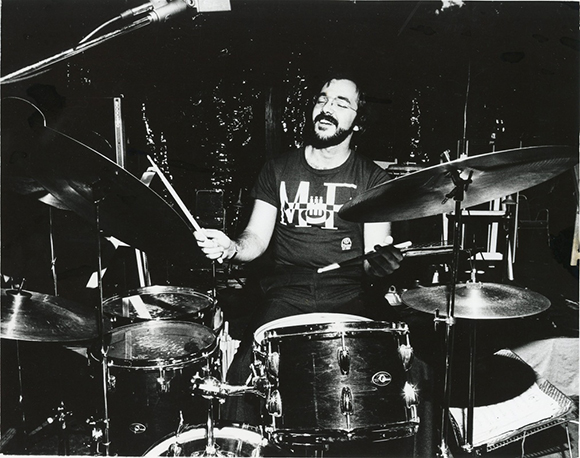 “What did you think of the visual presentation of jazz in the film? [Erskine:] ‘Considering that the film was shot in a (reportedly) short amount of time, I think the director and editor did a very good job. A drummer crawling out of a major car wreck and then somehow managing to get himself on-stage to play, bleeding and injured, in that all-important regional big band competition (where there are no other bands apparent?) Hardly. Musicians sitting there all stony-faced while the bandleader or conductor raises his fist to stop the band over and over again. Jazz has too many free spirits for that kind of behavior to fly. I've never seen a band act like that, or ‘live’ music sound so ‘drop the needle.’ Also: if someone wants to test my ability to play a tempo: give me 4 beats, not just two—YOU don't even know the tempo with that kind of a count-off, Mr. Band Director.’” 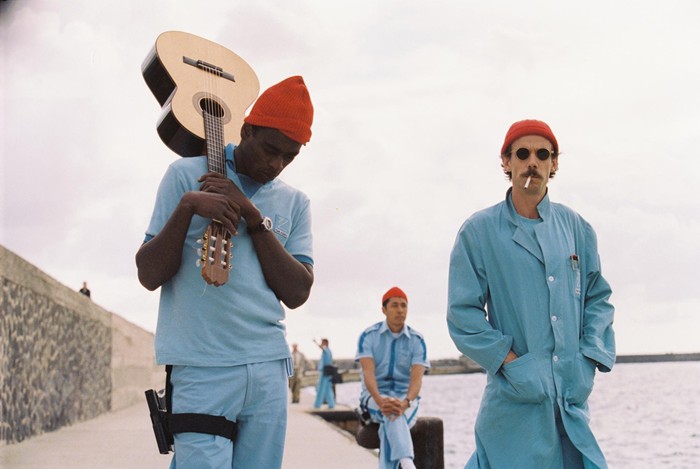 Daisy Woodward of AnOthermag.com compiles the must-have playlist, "The Sounds of Wes Anderson."

Here is astonishing audio from the reunion that took place last week in California, where the cast members of the original Tony Award-winning production of Stephen Sondheim and James Lapine's masterpiece "Into the Woods" gathered onstage to reminisce and sing some of the musical's most beloved tunes. All I can say is, Disney had better do this perfection justice.