"'Twin Peaks' Returns as Showtime Limited Series from David Lynch & Mark Frost": Deadline's Nellie Andreeva reports on the next chapter of the cult classic series, complete with an embedded teaser for the next season, due to air in 2016. Related: The New Yorker's Ian Crouch shares "Some Thoughts on the Planned Return of 'Twin Peaks.'" See also: My sprawling 2011 interview with "Twin Peaks" star Piper Laurie, who reminisces about fooling her co-stars into thinking she was Fumio Yamaguchi.

“‘Twin Peaks’ fans’ quarter-century wait is over. One of the top cult series of all time is coming back with a new limited series on Showtime from its original creators, David Lynch and Mark Frost. The nine-episode series will go into production in 2015 for a premiere in 2016 to mark the 25th anniversary of when the series finished its run on ABC. In a fact that will delight ‘Twin Peaks’ devotees, Lynch and Frost will write and produce all nine episodes, with Lynch set to direct every episode. The new ‘Twin Peaks’ will be set in the present day, more than two decades after the events in the first two seasons. It will continue the lore and story of the original series, with Lynch and Frost committed to providing long-awaited answers and, hopefully, a satisfying conclusion to the series. It is unclear which actors from the original series will be featured in the followup. I hear that star Kyle MacLachlan will be back, reprising his role as FBI Agent Dale Cooper who was at the center of the show.” 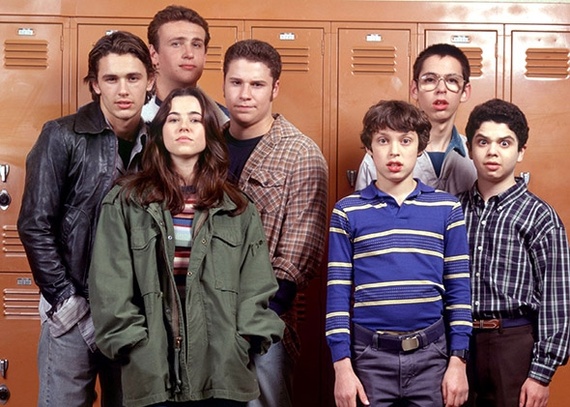 “In recent years, ratings-watching has evolved beyond pure industry gossip to something the average Internet user can participate in, and the website TV By the Numbers has been a leading resource for all the raw Nielsens data that TV studios use to make programming decisions. And if that's too confusing to sift through, there's always the Cancellation Bear—a web creature that’s either an informative pal to viewers everywhere, or a predator terrorizing quality TV, depending on who you ask. TV By the Numbers co-founder Bill Gorman created the Bear four years ago as a whimsical way to keep track of the site's ‘Renew/Cancel Index,’ which predicts every major show's chances of surviving the TV season and getting picked up for next year. If your ratings are slipping, you're getting closer to the bear; if you're doing well, you're further away from it. If you're certain to be cancelled, well, you're bear chow.” 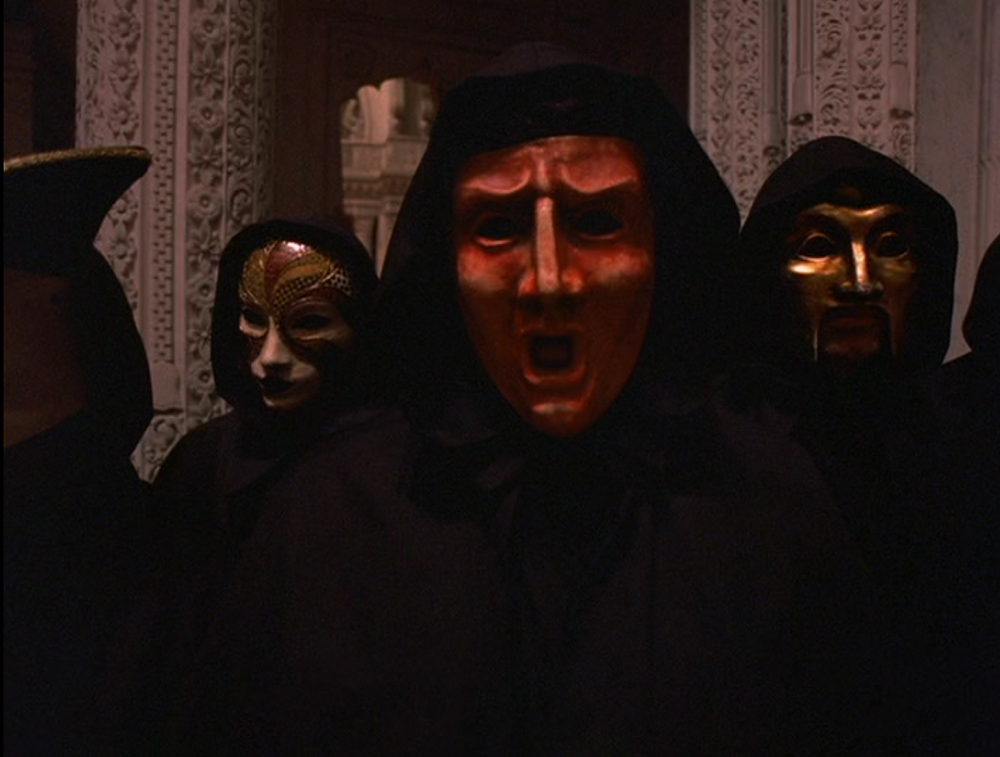 “Both ‘Gone Girl’ and ‘Eyes Wide Shut’ are deeply twisted, satirical and borderline maniacal erotic thrillers that seem to be made my a snickering auteur—well aware that the institution of marriage itself is being bathed in a hot dose of Tyler Durden’s corrosive lye soap from ‘Fight Club.’ Both films show broken marriages that can only be repaired by ritualistic, meticulously calculated blood sacrifices. Both films deconstruct the patriarchal, heteronormative surface world with the introduction of a dangerous psychopath intent on preserving it. Psychopaths—and the lesser sociopaths that fit within this diagnostic criteria—are everywhere in this world. If you don’t believe in silly things like Satan and the Occult—read up on the behavioral science of psychopathology and you will be presented with a very troubling biological manifestation of evil. If Satan doesn’t exist—well, it really doesn’t matter because the earth has essentially been filled with his foot soldiers for thousands of years and they are more prevalent than ever. Especially in Los Angeles. These people lack empathy—as familiar media personality Ellen Abbott (Missi Pyle) reminds us—in a pointed scene from ‘Gone Girl.’” 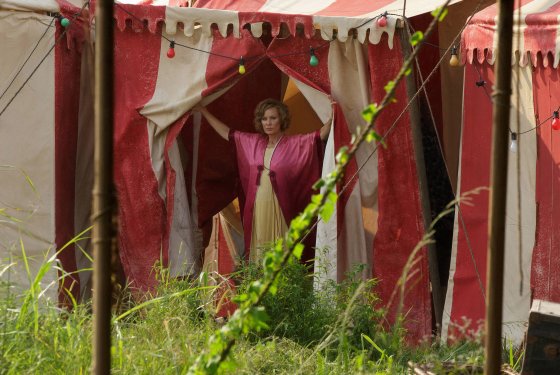 “The show has a slightly theater-workshop-y feeling, as if you're watching a floating, semi-improvised, cabaret-type production that aims to provoke, delight, and baffle, and that would rather be spectacularly awful than tasteful and measured, because at least the awful stuff will give you something to laugh at and talk about later. Looking back on seasons one through three, you may realize that whole episodes are conceived not according to any linear, A-leads-to-B-leads-to-C structure, but rather as a series of scenes or setpieces or tableaux (or musical numbers; these are the same people who created ‘Glee,’ after all). Spectacle is everything, and it's comprised of sex, blood, campy humor, the sorts of "transgressive" messages that make off-campus graduate theater experiments so iffy, and moments that seem to exist mainly to scratch somebody's itch (like Jessica Lange's performance of ‘The Name Game’ in ‘Asylum’). The commercial breaks are bumpers between short films that build to a bloody act of violence or a creepy-grotesque image. Each new segment often seem to have a rather tentative connection to whatever came before and after, like a bit in a sketch-comedy program or a musical revue or a circus performance. So you don't like the trapeze routine? Here come the elephants. And then the clowns. The scary clowns. The really scary clowns.” 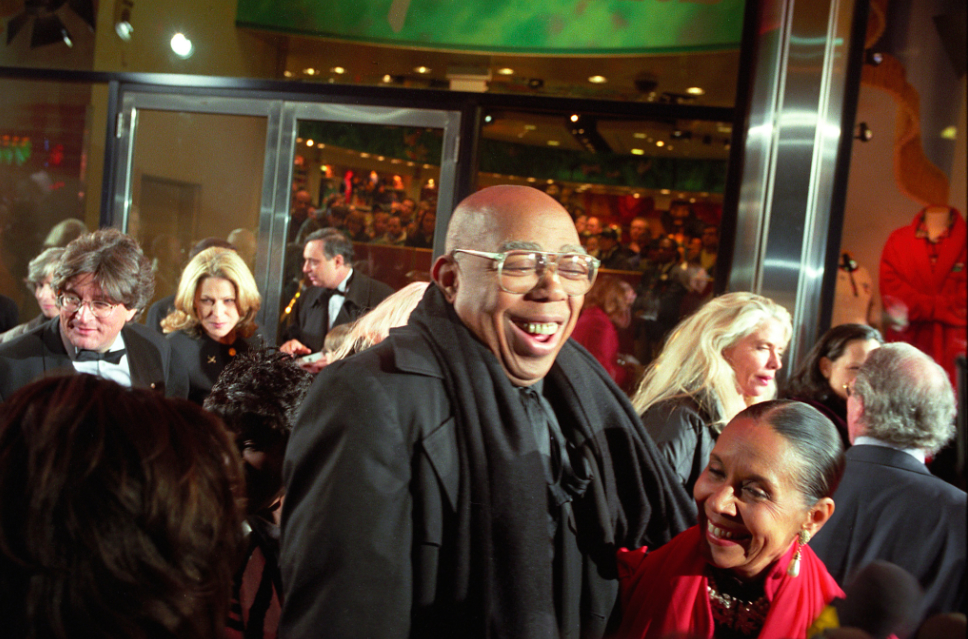 "Geoffrey Holder, Dancer, Painter and More, Dies at 84": A lovely obit penned by Jennifer Dunning and William McDonald at The New York Times.

“Geoffrey Holder’s career mirrored that of his brother in many ways. Boscoe Holder, too, went on to become a celebrated dancer, choreographer, musician, painter and designer, and he, too, left Trinidad, in the late 1940s, for England, where he performed on television and onstage. His brother’s departure put Geoffrey Holder in charge of the dance company, as its director and lead performer, and he took it to New York City in 1954, invited by the choreographer Agnes de Mille, who had seen the troupe perform two years before in St. Thomas, in the Virgin Islands. She arranged an audition for the impresario Sol Hurok. To pay for the troupe’s passage, Mr. Holder, already an established young painter, sold 20 of his paintings.After dropping his bags at an uncle’s apartment in Brooklyn, he fell in love with the city. ‘It was a period when all the girls looked like Janet Leigh and Elizabeth Taylor, with crinoline petticoats and starched hair,’ he told The New York Times in 1985. ‘The songs of that period were the themes from ‘The Moulin Rouge’ and ‘Limelight,’ and it was so marvelous to hear the music in the streets and see the stylish ladies tripping down Fifth Avenue. Gorgeous black women, Irish women — all of them lovely and all of them going somewhere.’” 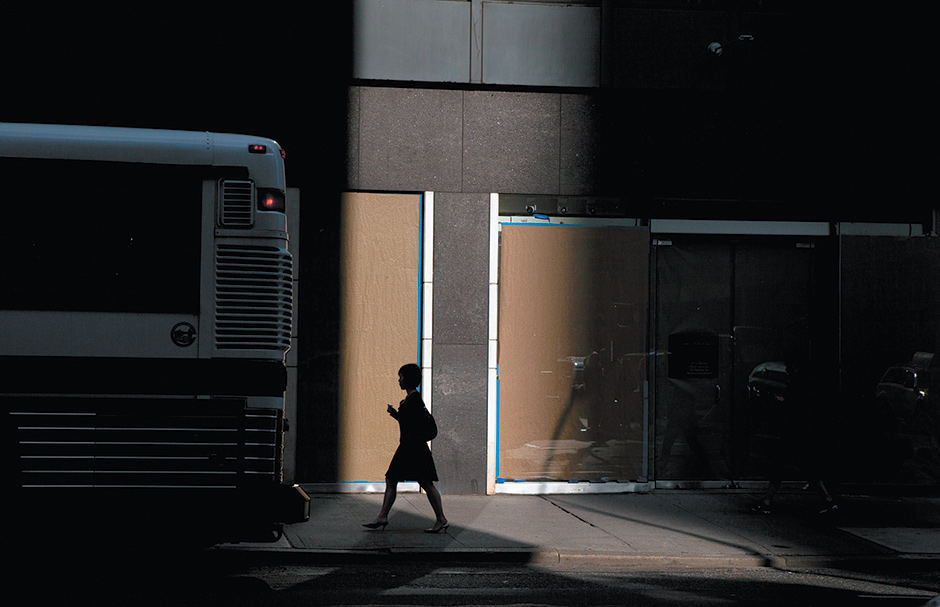 A 2009 photograph taken by Amani Willett is featured in Zadie Smith's article, "Find Your Beach," from The New York Review of Books.