Ruby Dee was one half of America’s first Black power couple. Like her husband, Ossie Davis, Dee was a performer, a writer and an activist. Though they worked on numerous individual projects, it was impossible to separate the two in one’s mind. It was always "Ossie Davis and Ruby Dee," like "Brackett and Wilder" or any number of inextricably linked partnerships one could cite. Married for 57 years, the duo fought for civil rights together, acted together on stage and screen, and even introduced old Black movies for a syndicated TV program I spent many late nights watching. And both were blessed with beautiful voices I could listen to in any capacity. Preceded nine years ago in death by her husband, Ruby Dee joins him today. She was 91. 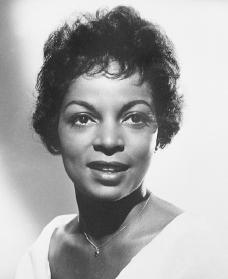 Dee was not just Black royalty, she was American royalty. She and Ossie were on the front lines for civil rights in the 1960s, befriending both Malcolm X and Martin Luther King Jr. Over the years, they sought to educate us on the American history that includes African-Americans in triumph and struggle. Their legacy in this regard is even bigger than their entertainment careers, though in that category, Dee's accomplishments remain impressive.

Boasting a career that spanned 74 years, Dee made her stage debut in 1940’s "On Striver’s Row." Six years later, she was on movie and television screens. In the theater career, she tackled Greek mythology, Tennessee Williams, Shakespeare, Athol Fugard, Rogers and Hammerstein and William Inge. On the big screen, she was directed by Joe Mankiewicz, Donald Petrie, Jules Dassin, Martin Ritt, Spike Lee and Ridley Scott. Ruby Dee was around long enough to play Sidney Poitier’s wife in 1950’s superb "No Way Out," and the mother of my generation’s Sidney, Denzel Washington, 57 years later.

In 1959, Dee played her most famous stage role in Lorraine Hansberry’s groundbreaking  masterpiece, "A Raisin in the Sun." Dee played Ruth Younger, the quietly strong-willed wife of Poitier’s Walter Lee. In a work filled with fleshed out, complex women, Dee is entrusted with Hansberry’s most controversial plot element and the play’s most shocking comedic line. Dee strikes a delicate balance between Ruth’s willingness to make her own tough decisions and her desire to support her husband no matter how stubborn he can be. Her performance is enshrined forever in Donald Petrie’s 1961 film version, which was wise enough to lift the entire main cast and their writer from Broadway. 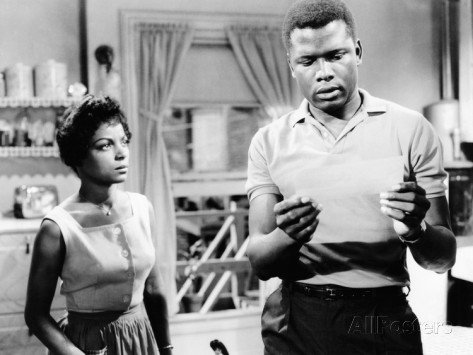 In that same year, Dee appeared onstage in a much lesser known masterpiece, Ossie Davis’ satirical comedy "Gone Are The Days." Playing Ruth Younger’s direct opposite, Dee gives a nicely calibrated yet over-the-top comedic performance as countrified innocent Lutibelle Gussie Mae Jenkins. Ms. Jenkins becomes enmeshed in a plot concocted by Purlie Victorious, a fast-talking preacher played by Davis. The plot goes awry, and Dee spins a politically incorrect goldmine of hilarity while trying to execute it. Like her Ruth Younger, Dee’s Lutibelle made the leap to movie screens in 1963’s "Purlie Victorious." Also like Ruth, this is a role that would win Tonys for other actresses in later years.

Though she missed out on those Tonys, one should not feel sorry for Ruby Dee. She won a Grammy, a SAG Award, an Obie, the NAACP Spingarn Medal and one of the eight Emmys for which she was nominated. Her TV work included Burt Reynolds’ sitcom "Evening Shade," (where she appeared with Ossie Davis), "Roots: The Next Generation," and my personal favorite Emmy-worthy performance of hers, as Sadie Delaney opposite Diahann Carroll in "Having Our Say." When I read the Delaney sisters’ book upon which this telefilm is based, I immediately heard Dee’s voice as the fiery, tough-talking Sadie. Carroll, Dee’s contemporary from the Studio System days, complements her nicely as the more even-tempered Delaney, Bessie. 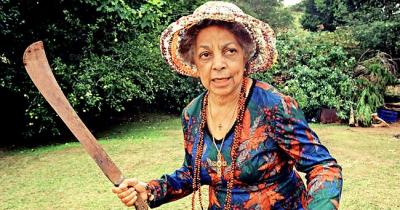 Dee brought credibility to her roles, even when they were bizarrely off-the-wall. In the TV adaptation of Stephen King’s "The Stand," she’s quite good as spiritual leader Mother Abigail, radiating goodness but also a sense of self-awareness that she may be guilty of the sins she advises against. On the opposite side of the good and evil coin, there’s Female, the voodoo (or something like that) landlady in Paul Schrader’s kinky 1982 reboot of "Cat People." In her brief screen time, Dee clearly relishes stewing in mysterious, Creole creepiness.

In 2007, Ridley Scott cast Dee in her SAG Award winning role as Mama Lucas, the mother of Denzel Washington’s Frank Lucas in the real-life crime film "American Gangster." Washington’s Lucas is a violent criminal, but he’s no match for his Mama. Dee calls upon the powerful persona she cultivated as a real-world activist to imbue this frail old woman with enough power to convince us that she could literally slap some sense into Harlem’s most dangerous man. Her big lecture scene, where she tells her son she’s no longer willing to look the other way, earned her a deserved Oscar nomination—her first and only one. Had she one more scene, I think the Oscar would have been hers.

In 1989 and 1991, director Spike Lee cast Dee in two roles where she played scenes of great emotional devastation. In the latter year’s "Jungle Fever," she’s paired with Ossie’s gun-toting Good Reverend Doctor as the parents of drug-addicted Samuel L. Jackson. Dee’s response to Jackson’s fate, and her big scene inside the riot that climaxes "Do the Right Thing," remain harrowing examples of the raw, fantastic acting Dee could bring to the screen. Davis and Dee play off each other brilliantly in "Jungle Fever," but not as well as they did for Lee two years prior.

When I heard Dee has passed, I thought of Mother Sister, the character she played in Lee’s 1989 masterpiece, "Do the Right Thing." She was instantly recognizable to people like me, kids who grew up in the neighborhood Lee depicts. In a bit of inspired casting, Lee pits Dee against her husband’s character, Da Mayor, who aggravates her to no end with his drunkenness. The relationship between Mother Sister and Da Mayor is a joy to watch; though antagonistic, the two bicker like the old married couple they actually are in real life.

The image that came to me today upon hearing the sad news is Da Mayor’s peace offering to Mother Sister. In an attempt to bury the hatchet, and maybe pitch a little woo, Da Mayor offers up flowers from the stoop toward the window Mother Sister usually occupies. Dee plays her reaction to the hilt. The way she looks at those flowers! Somewhere in the Great Beyond, Da Mayor’s been extending those flowers towards an unoccupied window. Today, Mother Sister appears to respond.