Once More Into The Breach: Some Overseas Blu-ray Action

“Watching TV is more complicated than ever,” I remember, in the early ‘80s, some pitchman averring on a spot advertising, what else, the magazine TV Guide, then the biggest periodical publication IN THE WORLD. Man, if that guy were around now, he’d have a stroke. There are, today, entire online organs devoted to covering all the action going on in streaming video. Hell, I write for one of them. Streaming has certainly changed the game in a lot of ways. When I first set out writing a book on the filmography of Robert De Niro a couple of years ago, I assumed I’d have to join a video rental store of hit up a library to see some of the more obscure stuff in the actor’s body of work. Not that finding a video store to join is easy nowadays (although I am lucky enough to live near a good one, Video Free Brooklyn). In any case, I was mistaken, because between Netflix and Amazon Prime, two streaming sources to which I subscribe, I was able to get everything I needed, even an obscurity like the early Brian DePalma picture “The Wedding Party.”

My point, in case you’re wondering if I’ll ever get to it, is that even for a physical media junkie such as myself, the actual NEED for physical media is waning, which is good for me, because space in my apartment is such that too much of a preponderance of physical media will make life, specifically married life, very uncomfortable. That and the fact that the New York mainstay of obscure music and video known as Kim’s shut down for good recently means that my foreign-region Blu-ray played doesn’t get as much of a workout as it used to.

A recent visit to the apartment of another cinema enthusiast got my International Amazon trigger finger itchy again. “How’s that German Blu-ray of ‘Charley Varrick’?” I asked wolfishly. “Great,” he said, and soon we were off to the races, with him rhapsodizing about the speedy delivery times he’s experienced on Amazon Japan purchases.

Well. Once home, I did not go nuts, but I did make a small haul. Among the items were a few that really DO warrant U.S. consideration, chief among them the aforementioned “Charley Varrick.” This was director Don Siegel’s 1973 followup to “Dirty Harry,” and it is pretty much a perfect crime film. And yes, it stars Walter Matthau as the title character, and yes, he’s perfect. His character’s the mastermind of what is supposed to be a small-time bank robbery gone terribly wrong from the very beginning that’s shown to go even further wrong when Varrick and his partner discover their take is far too big, and that they’ve just knocked down a mob-controlled money market. Ooops indeed. The German-issued high-def version of “Varrick” is one hundred percent ravishing from its opening-credits sequence of New Mexico sunrises to the final images of a burning jumpsuit. It’s supplemented by an excellent retrospective doc featuring great insights and anecdotes from Kristofer Tabori (Siegel’s son) and Howard A. Rodman (screenwriter and son of “Varrick” screenwriter Howard Rodman). 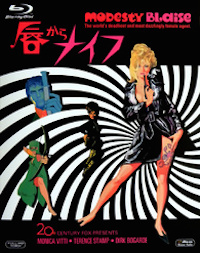 Why isn’t this a U.S. Blu-ray? A clue may lie in the observations in the doc: “Varrick” got a U.S. release that was little more than a dump, didn’t do well, and was consigned to obscurity in the U.S., while it was highly praised in Europe, Matthau even receiving a BAFTA Best Actor Award for his superb lead performance. While Universal Home Video released a sweet box set of vintage Eastwood pictures on Blu-ray in 2015, including three directed by Siegel (“Two Mules For Sister Sara,” “The Beguiled,” and “Coogan’s Bluff”) “Varrick” doesn’t rate yet. You never know when that’ll happen, but if you need to see this superb film in a superb version NOW, this is your best option.

My pal was also right about Japanese Amazon. I ordered a high-def upgrade of Joseph Losey’s 1966 “Modesty Blaise,” a comic adaptation of mixed success but a high intrigue value nonetheless (not as much pop art appeal as the cover design for this edition implies, but much eccentricity, including a musical number from Monica Vitti and Terence Stamp), and a Blu of the underseen late ‘70s Canadian thriller (John Candy has a small supporting role) “The Silent Partner,” which has a be-careful-who-you-steal-from premise in a ballpark similar to that of “Varrick.” Sure enough they were at my doorstep within three days of ordering and were highly satisfactory discs (and it’s worth noting that, unlike European discs, Japanese Blu-rays will by and large play on domestic hardware).

Right now the dominant trend in Blu-ray, both U.S. and European, tends toward upgrading already-available stuff rather that rolling out never-before-on-video or out-of-print material. And in foreign Blu-ray, the most attractive buys, at least to a consumer such as myself, are upgrades that American companies can’t or won’t be bothered with. The British label Eureka!/Masters of Cinema, for instance, recently released a highly-praised high-def upgrade of “Day of the Outlaw,” a fantastic 1959 Western by Andre de Toth, starring Robert Ryan and Burl Ives, for which I wrote the booklet essay. I’m also looking forward to that company’s version of King Hu’s “Dragon Inn.” (As I sometimes work for the company, I am gifted with complimentary copies, but the overseas mail on these can be a little slower than Japanese Amazon.) Such joys as these—and, for instance the Mr. Bongo presentation on Blu-ray of Orson Welles’ rarely seen short feature “The Immortal Story,” featuring Jeanne Moreau at her most sensuously ravishing—are reasons that foreign-region player will not achieve redundancy in this cinephile’s household any time soon.