If you’ve watched more than ten minutes of NBC’s Sochi Winter Olympics, you’ve seen an ad for the network's post-skiing plans for comedy domination, “About a Boy,” premiering this Saturday, 2/22, and “Growing Up Fisher,” premiering the next night (before both shows move to regular Tuesday timeslots on the 25th). As networks so often do, NBC is hoping to use the platform of one success (the Olympics) to launch others. The midseason begins and will feature highlights as accomplished as FX’s “The Americans,” The Sundance Channel’s “The Red Road,” NBC’s “Hannibal,” and A&E’s “Bates Motel”. Even the broadcast nets have a few intriguing dramas—NBC’s “Believe” and ABC’s “Resurrection”.

However, things are dicier on the comedy front. Working through multiple episodes of the two lackluster new offerings from the Peacock network and a third soul-crushing affair from ABC left me pondering the big question of the state of TV comedy. Critical acclaim goes the way of HBO with award wins for shows like “Veep” and “Girls” (with the outlier of “Modern Family”) while CBS dominates ratings with war horses like “The Big Bang Theory” and “Two and a Half Men” (and no one watches the best new comedy on the nets, “Enlisted,” buried by FOX on Friday nights). Where does it leave everyone else? And are any of the four returning/premiering comedies in the next week going to change the current landscape? Starting with the over-promoted NBC pair… 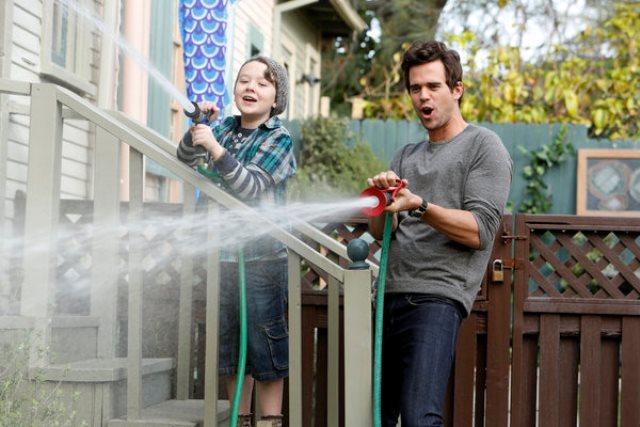 Technically, this is the third time that Nick Hornby’s beloved novel has been adapted. There’s the highly-respected 2002 film with Hugh Grant and Toni Collette. It almost went to series a year later with Patrick Dempsey in the lead role of a man-child forced into a higher degree of maturity by his friendship with a unique young man. Eleven years later, they’re trying again as NBC turns to the great Jason Katims (“Friday Night Lights”, “Parenthood”) and begs for a comedy hit. With most of their critically-acclaimed but low-rated comedies like “Community” and “Parks and Recreation” headed for retirement soon and the failures mounting—if a network can’t turn Michael J. Fox back into a TV star, you know it’s in trouble—there may be no net more in need of a smash hit. Should “About a Boy” give NBC hope? Probably not.

Will (David Walton) runs into a beautiful cello player (Maggie Grace) and lies about having a son to join her in a single parent support group. Later that day, Will sees Fiona (a game Minnie Driver) moving in next door with her son Marcus (Benjamin Stockham). While Will first sees Marcus as a tool to help him get laid, they form a quick friendship. Don’t worry, the series is not a weekly ruse in which Will pretends that Marcus is his son. It is basically a buddy comedy—the man-child and the child who often acts like a man.

When I saw the pilot last May, “About a Boy” felt fresh and well-cast, partially due to the horrendous fall season premieres I was watching at the same time (anything looks good next to “Super Fun Night”) but also because it had an energy that most recent network comedies have been lacking. The premiere has moments of clever insight into the dating process and how parenthood can change you but the show spins its wheels for the next two episodes sent for press, often repeating the same jokes and allowing supporting cast members (Al Madrigal and Annie Mumolo, both displaying plenty of wit) to completely hijack the show. I would like to think that the repetition over the first few chapters of this version of “About a Boy” will come to a halt and the writers will find the identities of their characters beyond hitting the same jokes (Marcus likes to sing with his mom! Hilarious!) but I worry that the bag of tricks was emptied in the pilot and this show has nowhere to go but the large pile of canceled NBC comedy failures in the last decade. 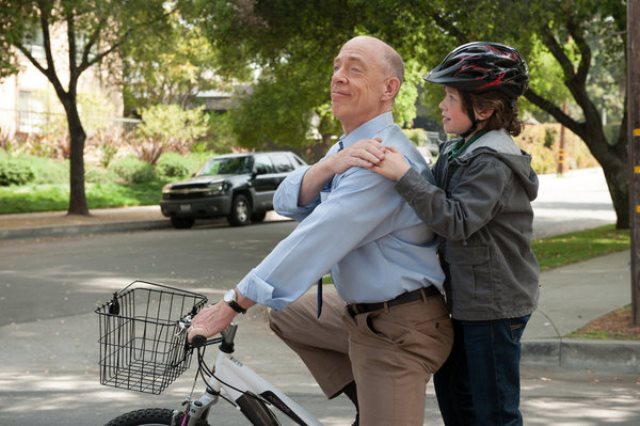 If there’s any comedic justice in this world, “Growing Up Fisher” will get the axe before “About a Boy”. There’s nowhere to go here; a show so damaged that it’s not salvageable. One of the worst comedy pilots of the 2013-14 season relies entirely on two-dimensional character tropes. Dad is challenged but refuses to let it define him. Mom is trying desperately to relate to her daughter. Son is awkward and uncomfortable with girls (there’s no other kind of pre-teen boy in sitcom TV). I would say that we’ve seen “Growing Up Fisher” before but the truth is what we’ve seen before was typically funnier.

The most frustrating thing about “Fisher” is watching an actor as talented as J.K. Simmons get sucked into such a poorly-crafted enterprise. Simmons plays Mel Fisher, who has been blind since he was 12. He has taught his son Henry (Eli Baker) to never let his disability define him, which of course leads to “hilarity” like watching a blind man cut down a tree with a chainsaw. Every joke, every line, every beat is built around either a “I can’t believe a blind guy did that” joke or the lesson learned from his atypical parenting. And if that kind of simplistic humor isn’t bad enough, Jenna Elfman fares no better with a thankless “modern Mom” role. Someone could write a book on why sitcoms in the ‘10s are built on the idea that women want to be like their teenage daughters. But then they’d have to watch this show and that would be cruel. 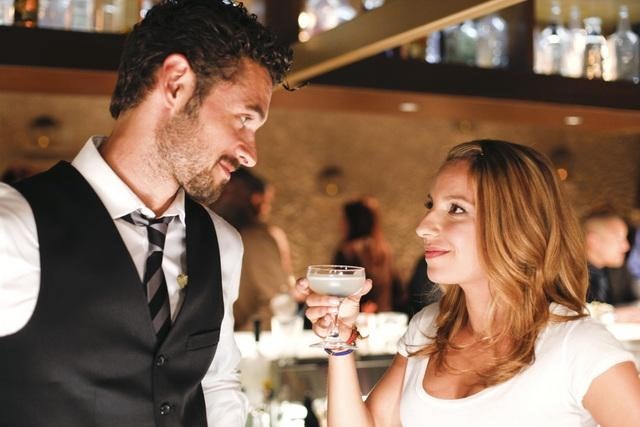 NBC isn’t alone either in the struggle to find a new comedy hit or the willingness to throw something new at the wall this mid-season. Enter “Mixology,” a show with a reasonably clever conceit and strong cast but sunk, again, by weak, narrow-minded writing. The show takes place at a bar, weaving in and out of the conversations of the beautiful people, coming back to the same few and sometimes offering flashbacks of how they got to this point in their search for companionship. The show is smarter than the commercials have made it seem in terms of quick dialogue but it’s all in service of the same old nonsensical gender war clichés. Aren’t we past the “Men Are From Mars, Women Are From Venus” tropes of sitcom television? Shouldn’t we be?

“Legit” is still a work-in-progress. Every joke that works is countered by a few that don’t. And yet, especially when I’m forced to sit through so many of the same old clichés on network TV, this kind of in-your-face experimentation seems even more valuable. It’s certainly not a show for everyone but maybe the networks would be better off if they stopped trying to make “shows for everyone”.